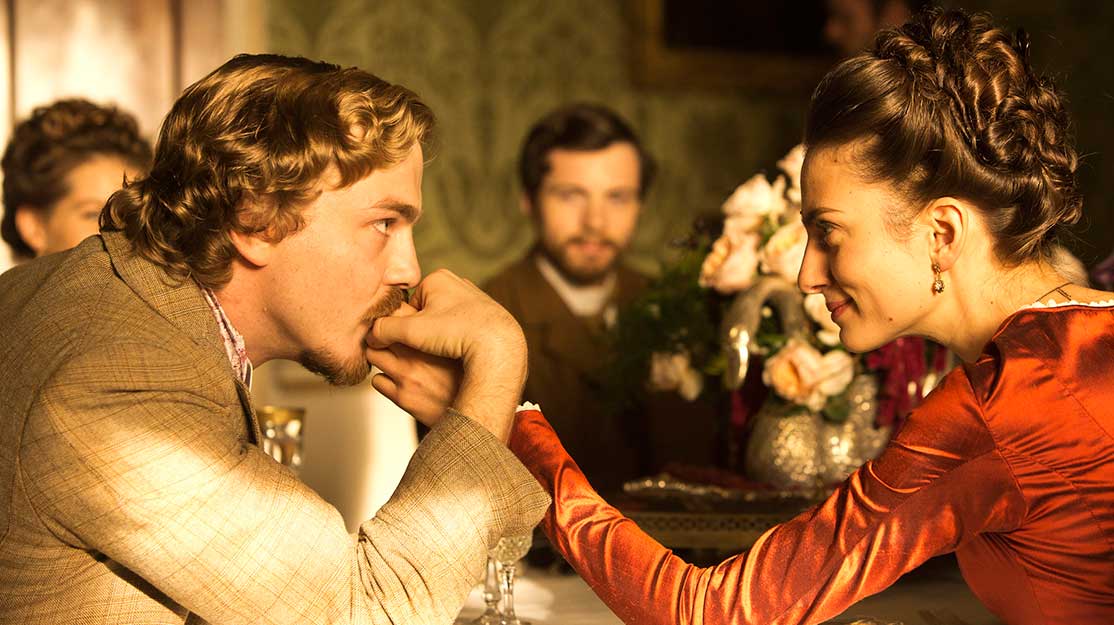 Dublin is making a habit of doubling for Victorian-era London. From crime drama Ripper Street to horror Penny Dreadful, the Irish capital has become a popular filming location for 19th century period dramas thanks to its narrow lanes and surviving period architecture.

Described as a story of love, greed, power and politics, it follows Hugh Pilaster (Dominic Thorburn), the son of a banker who is orphaned by his father and left at the mercy of his beautiful but power-hungry aunt Augusta.

Hugh and his best friend Solly (Albrecht Schuch) both fall in love with working-class Maisie (Laura de Boer) – but when Solly proposes to Maisie, Hugh leaves for America. Six years later, he returns rich and successful, only to find his feelings for Maisie haven’t changed.

“Making the film was one of the most spectacular and intense experiences of my working life,” Schwochow recalls. “We lived in Dublin for five or six months. I worked with an amazing Irish crew. Everyone had very impressive CVs and had worked on international productions before. Just three or four people came with me from Germany, including my director of photography, and some actors. Living in Dublin, working in Dublin was fantastic. It was a wonderful experience.”

Location scouting took place all over Europe, taking in Prague, Belgium and parts of England. But Constantin Film had previously set up in Dublin – for 2014 feature film Love, Rosie – and von der Leyen was keen to revisit the city.

“We had an excellent experience with the crew in Ireland,” he says. “The tax credit is also very attractive, but we chose Ireland because you really get the feeling of London of the late 19th century. It was much more authentic shooting on the locations there. All that together made it very easy to go to Ireland. We had a great experience there. We would definitely love to go back sometime.”

A Dangerous Fortune was the result of a 10-year development deal between the producers to build a slate of Follett adaptations. The first results were seen in 2010’s Eisfieber, based on the novel Whiteout, before focus switched to A Dangerous Fortune three years ago.

“What’s special about Ken Follett is the richness of his stories,” Schwochow says. “When you open his books, you’re drawn into a world that’s so colourful and so precisely described because he puts so much effort into the research.

“Of course, there’s a lot of imagination and creativity in the storytelling but, on the other hand, the characters and the setting are so rich. It’s a great pleasure finding such strong, rich and colourful poetic material.”

In particular, the director describes A Dangerous Fortune as a gift for filmmakers: “You open the script and you drown in a world that is completely unknown and very rich because you have so many settings. You have the world of the rich, noble people and the poor – it’s like a big playground. And you have characters who, even though they live in a very distant period, feel so close.

“In a way it’s a story about young people trying to find a different way in life from their parents and the difficulties, and the struggle to find your own identity in a world that seems very free and open but actually has lots of limits and boundaries. That’s what I found very interesting and is something that comes back again and again in my films.”

American writer Annette Simon penned the scripts, working with Schwochow to create a vision of Victorian London that avoided the serious tones often adopted by other period dramas.

“Telling the story in a very naturalistic, realistic way isn’t something that interests me so much,” Schwochow admits. “Too many stories from the Victorian period are told in a very serious way and I tried to find a way with Annette to go over the top.

“You find so many crazy things when you start investigating the Victorian period – the way people acted, how they communicated – there was so much pretending and hiding of the truth. And this is why we tried to find a style that’s more fairytale, crazy and over the top.”

Though many European dramas with international ambitions choose to shoot in English – Borgia being just one example – the production team decided A Dangerous Fortune would air in German, even though some of the actors spoke English on set, with their lines later being dubbed into German.

Von der Leyen explains: “If you shoot abroad, you usually have the main cast you bring from home and all other roles you cast locally. In this case, we had them speaking in their native language so they knew what they were saying. If they spoke German, then they wouldn’t have understood what they were saying and their acting wouldn’t match what they were saying. So we decided this would make more sense and give the cast the chance to give it their best. We were very happy about the decision.”

Schwochow, who is attached to direct Letterbox Filmproducktion’s finance miniseries Bad Banks for ZDF and Arte this fall, continues: “Everybody spoke their mother language – in one scene, Dominic would speak English and the German actor would speak German.

“Because you can’t rely on the language, you have to have actors who understand that they have to listen to and look at each other, to find eye contact with each other and help each other. Dominic always knew what the scene was about and we even tried a little bit of improv. It was different from when you have actors who speak the same language but it was very easy.

“It got more difficult when I had to find the German voices for the dubbing. That process was more intense than finding Dominic.”

The cast also contributed to the cheerful mood on set, which Schwochow describes as one of the aspects of the production of which he is most proud.

“After the second shooting day we were a big creative family and no matter if people had seen my work or worked with Ridley Scott or Steven Spielberg, they were giving everything,” he says. “There was a great partnership between the German, Irish and English actors.

“And even though we had a very tight schedule, shooting in just 49 days, we worked so well that we didn’t feel in a hurry. We had an open creative atmosphere. The whole production felt very free and open-minded with not much pressure. I’m very happy it went this way.”

“The opulence of what you can see, the costumes, the locations – that’s something we’re proud of,”adds von der Leyen. “We had a great crew.”