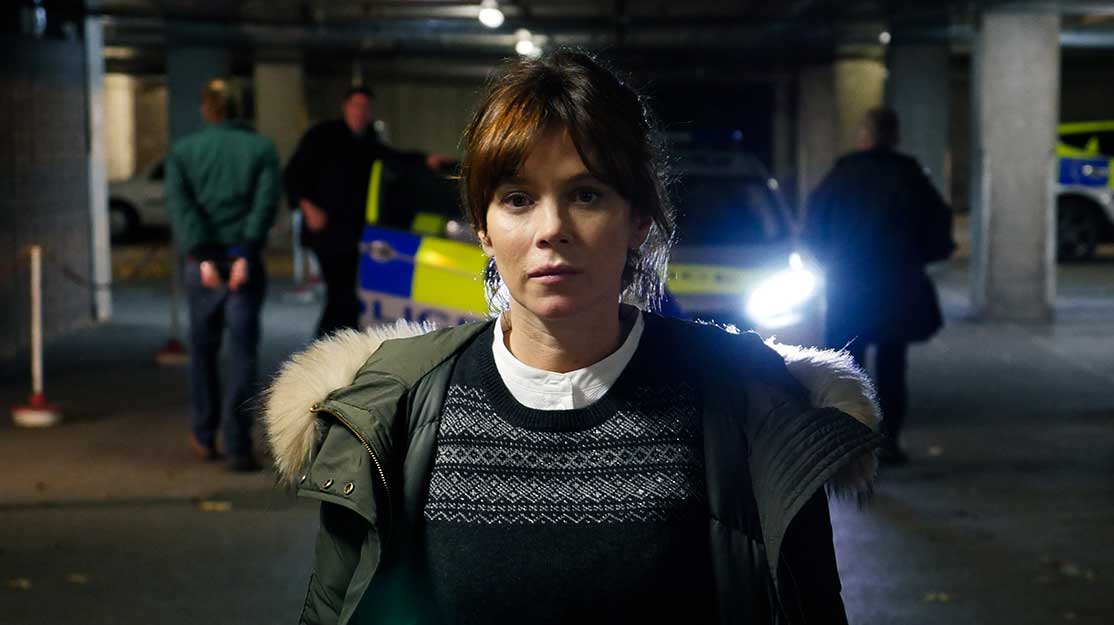 The Bridge creator Hans Rosenfeldt brings Scandi style to the streets of London in crime drama Marcella. DQ meets the cast and crew.

On a bright and sunny day in central London, light pours into the Serious Crime Unit office.

Ten floors above a bustling Tube station, the room is filled with banks of desks, each one covered with its own computer and piles of paper. Police officers who glance up from their monitors can enjoy unimpeded views of the capital through the panoramic windows.

But there’s work to do. On one side of the room, two whiteboards are covered with photographs and information relating to a group of murder victims. Images taken from the blood-stained crime scenes leave little to the imagination.

Welcome to the world of Marcella, an eight-part drama currently airing on ITV that marks The Bridge creator Hans Rosenfeldt’s first foray into English-language series.

Anna Friel stars as the eponymous detective who returns to the Metropolitan Police’s Murder Squad when her husband (played by Nicholas Pinnock) suddenly leaves her.

Eleven years after she gave up her fast-tracked police career to marry and start a family, she throws herself back into her work and, after a spate of murders, finds herself on the case of a serial killer that first struck in 2005.

Produced by Buccaneer Media, Marcella is executive produced by co-creators Rosenfeldt and Nicola Larder alongside Tony Wood. Cineflix Rights is distributing the series internationally and has secured a deal with Netflix that will see the series air worldwide on the SVoD platform.

As a big fan of The Bridge (aka Bron/Broen), Friel says she was excited to join a “unique” production that isn’t simply a remake of an existing Scandinavian drama. “It was changing the mould and the shape by taking a Scandi writer, putting him in England and letting him give his take on London,” she tells DQ during a break from filming at the fictional police station.

Carrying the series as the title character, who Friel admits is in almost every scene, might have led to the actor feeling under pressure – but she says she hasn’t had time to stop and take stock during the intense shoot.

“For 13 hours a day I’m thinking like Marcella, so it’s made me a bit depressed at certain times because there’s quite a lot on her shoulders,” she explains, “but it’s only a certain time in your life, and my daughter Gracie always pulls me out of that because I go home and I’m mummy and that’s real life.”

Discussing her character, Friel continues: “I love watching strong female leads but I also like the human side, that we’re all delicate and fractured. Most cops are mavericks in what they do but they’re also human. Marcella’s incredibly fractured. We all use a bit of our own life to make it true and believable, but I’m really sane compared with Marcella.”

Friel was well placed to star in a drama from a Swedish writer, having previously worked in Scandinavia on Norwegian historical drama The Heavy Water War (aka Kampen om tungtvannet or The Saboteurs).

“That was one of the biggest things that drew me to this – they had a work ethic I’d never seen before,” she recalls. “It was very tight and really well thought out; very concentrated and focused. I liked that a lot.”

American Odyssey and Pushing Daisies star Friel was the “first and only choice” to play Marcella, according to executive producer Larder, who created the character before seeking out Rosenfeldt to bring her story to life.

“I’d worked with her before and I knew she gives a lot of herself to her roles,” Larder says. “She’s a method actor and I knew I wanted someone to lay themselves bare in the process. Marcella is very raw and very visceral and I wanted someone brave like Anna to go there. She does that pretty much every day.”

Larder – who was a development executive on the first season of The Tunnel, the Anglo-French adaptation of The Bridge – describes Marcella as “amazingly complicated,” a detective who failed to detect the collapse of her marriage and is now headlong in an emotional spin while trying to catch a serial killer. 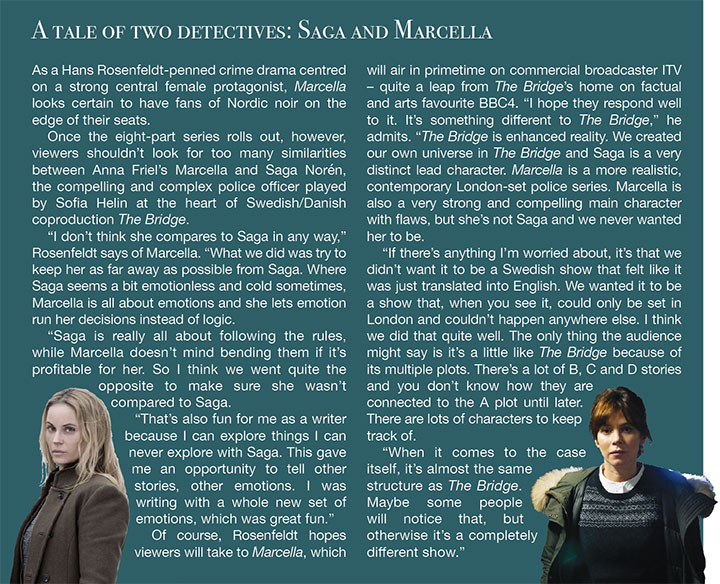 “I like the idea of a mistrustful central female protagonist whose actions the audience should always understand, if not like,” she adds. “That’s real life – it’s not always black and white. We can be great people who sometimes act irrationally, unsympathetically or selfishly. Marcella has a reality to her. She’s not defined by being a detective or a mother, she’s defined by both – she’s just not been able to do both simultaneously.

“There are big question marks over Marcella’s character and what she’s capable of from the beginning. We run with that and we enjoy it.”

From the slow-boiled character studies of Broadchurch to the harsh Icelandic setting of Fortitude, every new crime drama in the UK in recent years seemingly can’t escape being described as a British take on the immensely popular Nordic noir genre.

“At its heart, Marcella is an emotionally guided thriller and all Tony and I do is support Hans’s vision. When you’ve got a whole load of brilliant, clever and emotional British actors on top of his Swedish words, you get this beautiful creative fusion.”

Having written three seasons of The Bridge – a fourth (and possibly final) is under discussion – Rosenfeldt says he was keen to put Swedish detective Saga Norén (played by Sofia Helin) to one side and work with a new central character. “I’ve been writing Saga for so long so it was fun for me to do something else. I know Saga so well – it’s nice to meet someone new,” he explains.

For his first English-language series, Rosenfeldt wrote the first three episodes in Swedish before they were translated into English. For episodes four, five and six, he gave notes in English, before writing the last two in English with the help of a script editor.

But, as Friel found out when she read the finished articles, the writer enjoys giving actors room to contribute to their own character’s development beyond what’s on the page. “It’s quite intimidating following Saga because she’s such a great character,” she says. “I wanted to know how much of Saga was written on the page and how much it was (Helin) who brought it to the script. (Rosenfeldt) said it was a blend of both and there are gaps for me to inhabit her. That was a bit scary.”

Rosenfeldt explains: “When you read my scripts, it might seem like there’s not much in them, but that’s how I write. I don’t like writing stage directions, I don’t write emotions and I try to keep away from exposition, in terms of both plot and emotion. So it’s quite a strict script, which gives the actors a lot of room. When they’re really good, like Sofia and Anna, they do miracles with it.”

Reuniting with Rosenfeldt is Henrik Georgsson, one of three directors alongside Charles Martin and Andrew Woodhead. Georgsson, who steers episodes seven and eight of Marcella, has previously overseen 16 hours of The Bridge as well as episodes of Wallander.

“It’s also the first time for me working in English and sometimes it’s hard when you’re talking about dialogue and discussing things with actors,” Georgsson says of his experience on Marcella. “The crews are a little bit bigger but it’s great to be filming in London.”

The series has been filmed in three blocks, with each director given the freedom to bring their own style to their episodes. “Mine is a focused style,” Georgsson says. “I’m trying to find what’s essential in the scene. The second block had more of a moving camera. I like pictures with a lot of depth. Actors sometimes stand by a wall but we don’t like that because you can’t get depth, and lighting is harder to do well, so we prefer to have people in the middle of the room.”

The production team made a point of keeping the cast clueless about Marcella’s final act and the killer’s real identity. “We wanted all our characters to act in the moment,” Larder says of the “big, bold puzzle” drama. “That’s the spirit of the piece – they’re not necessarily thinking ahead. They only learnt about some of the key reveals of the series in the final weeks of shooting. It means they’re focusing on the scene and what the character actually knows, rather than pre-empting what they know in the future. It gives a real freshness and immediacy and it keeps people on their toes.”

There were also challenges for the production team, most notably in filming across London and finding the right location for the main police station.

“We’re lucky enough to be on the 10th floor of a tower block, which means incidentally we’re exploring the city through our shots,” Larder says. “Once we found that location, it felt like we could radiate out from that. But we’re competing in a very fruitful time for drama in TV and film in a city that is overrun with film units. It’s been a big challenge.”

Production designer Max Gottlieb continues: “One of the key things was the police station and what it means to the story, but you also have to take into account every other police show and every other police station. The key thing was actually showing London, so that’s why we chose this location. Being so high up, you’re always seeing London in the background and you’ve got great shots of Marcella looking down at life.

“Real police stations are usually some form of blue, but we wanted to do something warm to make it more to do with Marcella. We used a lot of wood and it’s quite a creamy colour to give it that warmth.”

While she’s hopeful Marcella will get a second season in 2017, Larder is now keen to bring more European writers to the UK.

“I feel like the idea is boss right now,” she says. “I found an incredible talent in Hans who wanted to put his fresh authorship into the most favoured genre, crime. I want to continue to build relationships with writers with European and international prowess and keep challenging the market to keep giving those authors a voice outside of their home territories. That’s what I want to be doing.”