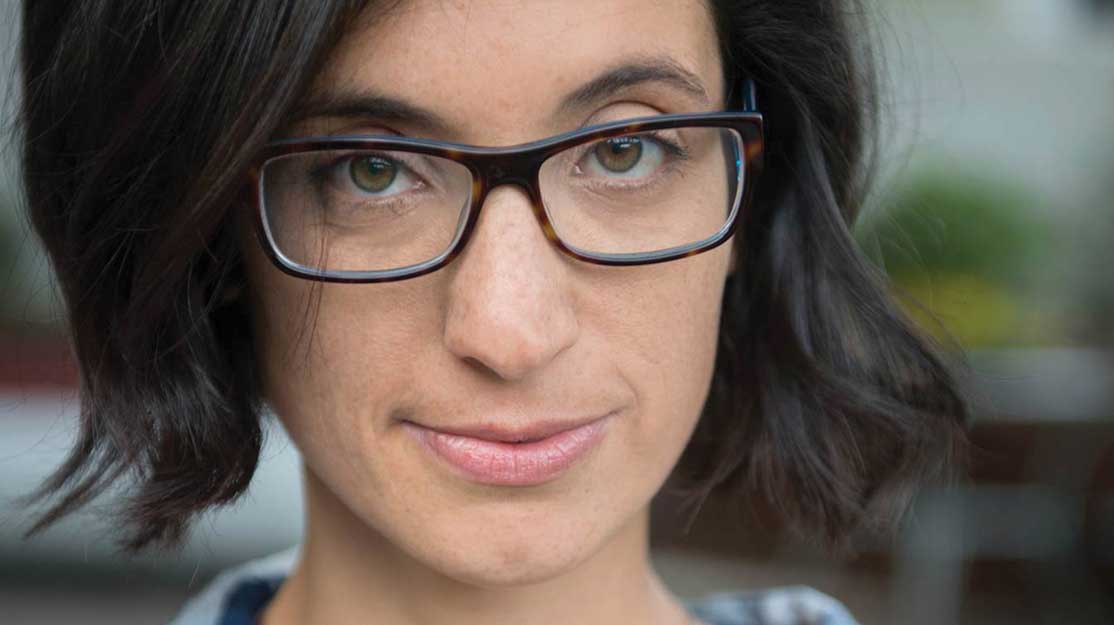 Keeping the faith: Sarah Treem spills the beans on The Affair

The stress of Sarah Treem’s first major project almost led her to quit television. Now, as showrunner on The Affair and following a stint on House of Cards, she couldn’t be happier. So what changed?

If there’s such a thing as a perfect marriage in television, it might be between Showtime and its Golden Globe-winning drama The Affair.

The US premium cable network is best known as the home of political thriller Homeland, period piece Masters of Sex, and medical comedy-drama Nurse Jackie.

But it seems there was something missing from its schedule until network president David Nevins invited Sarah Treem (main image) and Hagai Levi to pitch a new series about the emotional fall-out that takes place when Noah, a teacher, and waitress Alison begin an affair. Uniquely, the show is told from the viewpoint of both Noah, played by Dominic West, and Ruth Wilson’s Alison.

The Affair debuted on Showtime in October 2014 and, just three months later in January 2015, Treem was on stage to collect the Golden Globe for best drama ahead of fellow nominees Game of Thrones, Downton Abbey, The Good Wife, and House of Cards. Wilson also won best actress in a drama series, while West was nominated for best actor.

A second run of the show was ordered halfway through the first 10-episode season. Production began in May, with The Affair due to return to screens this October.

Co-creator and showrunner Treem recalls: “We ended up pitching it to them and Nevins just kind of bought it in the room. He said he’d been looking for something in this world for a long time and he liked the concept.

“He had wanted to do something about marriage and thought this was a really great twist. We pitched it as a show about what makes a relationship work or fail, but within the guise of an affair, so it was a right-place, right-time scenario.”

Treem says The Affair aims to be honest in its storytelling, setting aside the plot twists and supernatural elements that have become common motifs in modern television drama and instead creating a plot more relevant to the lives of its audience.

And it was something of a surprise that the first season was then rewarded with the Golden Globe for best drama. “We had just premiered a couple of months earlier so it was really quick and quite a shock,” Treem admits. “Story-wise, the second season, in terms of complexity and skill, is better than the first, so I’m excited to tell the story on a richer level.

“I would absolutely love it if we won another Golden Globe, but if we don’t, that’s OK too. The fact we get to do the show again and keep going with the story is its own reward. That means more to me than having a medal for it.”

The Affair’s team of writers reconvened in LA earlier this year to break down the season two story arc. They discussed each of the 12 episodes in detail and, specifically, considered what happens to each character. They then talked over the first seven episodes further before the writers separated to pen their scripts.

Treem explains: “Our method is to sit around in a room for a couple of days and really go through what each episode is about and what the journey of the individual characters needs to be. Then we break them up into beats and come up with a rough outline in the room, and an individual writer will take the outline and write it up. We’ll give comments on it and it will go to the network for approval. And then that writer will write the episode.

“We’re dividing up the stories so it’s not just Noah and Alison’s perspectives for the second season. We’re bringing in some new perspectives, which give the season a more prismatic feel and make the storytelling more complex, which I really like.”

The Affair marks Treem’s first foray into showrunning. Her TV break came as a writer on all three seasons of In Treatment for HBO, where under an overall deal she also wrote and produced How to Make It in America. She then wrote and co-executive produced on the first season of Netflix’s breakout original drama House of Cards.

“I love the job. But it’s been a really steep learning curve,” the California-based writer says. “The process this year is a lot smoother than it was last year. Showrunning is basically good management. It’s about leading people and guiding people toward a common vision but not in a way that squelches their instincts and makes them feel like they’re just cogs in a wheel.

“What I found challenging in the first season was the act of creating something brand new out of nothing. Birthing a show is a very different skill from managing people. It takes a certain amount of solecism and, frankly, a narcissistic focus, which doesn’t let other people in that easily.

“I think the reason everyone says the second season is easier than the first is that in the second you have the blueprint: everybody knows what the show is and everyone is familiar with the characters and their psychologies, so you can be more open and let go of the reins a lot because you know where you stand. It’s just easier. I’ve really enjoyed the process this year.”

Treem’s rise to become showrunner of an award-winning drama after working on just three other TV shows might be considered meteoric, but she doesn’t see it that way. Writing stage plays from an early age, Treem had graduated from the Yale School of Drama when one of her scripts was passed to HBO, which sent it on to Rodrigo Garcia, the showrunner of the first season of In Treatment. The series was adapted from the Israeli format BeTipul, about a psychologist and his weekly sessions with patients.

“I got really lucky,” Treem admits. “Rodrigo read this play that was kind of wild and he loved it and hired me sight unseen. He just called me up and offered me the job.”

After writing the character of Sophie, played by Mia Wasikowska, Treem returned to teaching in Maine, but was later called to LA to become the on-set writer for In Treatment – a role that almost led her to quit television.

“It was so hard that first year,” she says. “It was crazy because that year we were doing 54 episodes, and I was the only on-set writer. I was 26 or 27, I’d never been to Hollywood, I knew nothing about television production and I was really out of my element, exhausted and under a tremendous amount of stress.

“So I thought maybe this was not for me. After that season, I flew back to New York and told my agents to never put me up for television again. They told me to take a vacation.”

Treem changed her mind, however, when HBO offered her an overall deal, and she continued writing on In Treatment for two more years. During the off-season, she also worked on comedy-drama How to Make It in America, about two entrepreneurs trying to find success in New York City’s fashion scene.

After Treem’s HBO deal ran out, Beau Willimon, who she had met when she was a 19-year-old theatre intern, invited her to join a new series called House of Cards. Treem worked on the show during its first season.

The first year of House of Cards, she says, was “like the Wild West. There were no creative executives at Netflix, so nobody was giving us notes. There was so much money, so much talent, and the rules were getting broken and rewritten all over the place.

“We kept joking that if we were really good, we were going to win a Webby (the awards that honour excellence on the internet), because we didn’t know if anyone would watch the show, and then it just blew up beyond anyone’s wildest dreams.”

While House of Cards was shooting its first season, Treem was already looking towards her next project, The Affair, which was co-created with Hagai Levi, the creator of BeTipul and a producer on In Treatment. Expecting her first child, she wanted to set up a project after the birth and so wrote the pilot on nights and weekends, and then pitched it to Showtime when she was seven months pregnant.

“We felt that was a pretty natural evolution out of In Treatment, which is where we met,” Treem says of The Affair’s creation with Levi. “In Treatment is about perspective and how having to explain yourself to somebody else is so very difficult. Everyone is trapped in their own consciousness. As writers, that idea appealed to us on a thematic level, and then Hagai said, ‘Why don’t we do a show about an affair but from two perspectives so we can double-down on that idea?’

“We spent some time coming up with the characters and figuring out the worlds, and it grew really organically. We wrote the script on spec; we didn’t develop it with any particular network, so we really had a chance to let it incubate on its own.”

It’s that freedom that Treem attributes, in part, to the success of Netflix and the growth of original drama on other VoD platforms, and an increasing number of cable channels.

“Netflix exploded the marketplace in this way that has reinvigorated the creativity of writers,” she says. “There are now so many places your show can get made that you don’t have to think, ‘I need to write the type of show AMC or another network is going to buy,’ which was the mentality we had for a while. Now you just write the show – write whatever the heck you want – and someone will probably be interested in it if it’s good. It’s really freeing.”

Despite the fact season two of The Affair is still in the relatively early stages of production, Treem is already plotting the storyline for season three.

“I have a pretty clear idea for season three,” she reveals. “My concept for season four is a little vaguer. When we pitched it, we pitched a three-season arc. So we’ve always known pretty clearly how the show goes through the third season. How it evolves beyond that remains to be seen.”

As one of a growing number of female showrunners working in television, Treem says it feels “like a real watershed year for women in television,” and describes the emergence of limited-episode event series as network television’s answer to cable channels’ hugely successful slow-burn, narrative-driven dramas.

And having started in television writing on the adaptation of an Israeli series, she says remakes can work when people take the concept and inspiration of a show and make it their own. “Where people get into trouble is when they copy something from another culture word for word and shot for shot. There’s a lot that’s lost in translation.”

Looking back on her career so far, Treem adds: “I got lucky that my first job was In Treatment, which was a very niche show, but it was incredibly prestigious and we had a tremendous amount of freedom in the writing. It was a writers’ show because there was one person writing each character, so I got very close to the actors and actresses I was writing for and it really became a team effort.”