Season five of fantasy phenomenon Game of Thrones has picked up where its previous runs left off, delivering massive ratings for US cable network HBO. Overnights for the first three episodes came in at eight million, 6.81 million and 6.71 million respectively.

That slight week-on-week decline shouldn’t give too much cause for concern, because so much viewing of the show is now time-shifted, on-demand or via other platforms. To underline the point, HBO has just released data that shows a staggering 18.1 million viewers watched episode one in the first week after its launch (a period of time referred to as live+7). This figure, which includes linear showings, HBO Go, HBO Now and on-demand views, confirms the serious pulling power of the show – while also cautioning against hasty judgements about first day viewing.

Game of Thrones is also popular internationally, with the UK launch garnering similarly enormous ratings. Sky Atlantic, which airs the show one day after the US transmission on HBO, reported record overnight ratings of 1.57 million – up 29% on season four’s debut. As in the US, those figures are certain to increase once time-shifted and multi-platform viewing is factored in. There were also record ratings for Foxtel in Australia, where 242,000 tuned in to watch episode one at 11.00 local time. An additional 311,000 tuned in at 19.30, creating a record day-one audience of 553,000.

Game of Thrones’ ratings success is made all the more remarkable by the fact it is such a heavily pirated show. In the US, it holds the dubious honour of having been the most-pirated show for the past three years in succession. Problems with piracy have been exacerbated this year, with the first four episodes of season five having been leaked online ahead of the show’s official launch.

The ratings story is less rosy for Mark Burnett and Roma Downey’s 12-part series AD: The Bible Continues, which has seen its audience on US network NBC slide in consecutive weeks. After a robust opening of 9.7 million on Easter Sunday, the next three episodes have come in at 7.75 million, 6.36 million and 5.77 million respectively.

AD is a sequel to The Bible, a Burnett/Downey miniseries that aired on cable channel History US last year. Its underperformance is a surprise, given that The Bible averaged 11.4 million viewers per episode over its 10-episode run – making it the biggest US cable show of 2014.

AD’s performance has led some analysts to suggest that NBC will probably cancel the show (though a final decision on that will need to take into account time-shifted ratings and a couple more episodes of data). This would be a blow to Burnett and Downey, who told journalists at MipTV in Cannes that they would like AD to be the launch pad for a multi-series franchise that tells more stories about the early years of the Christian church. Possibly, in hindsight, they would have been better placing AD in the less ratings-obsessed world of cable.

The standout performer in the UK so far this year is BBC1’s Poldark. Based on books by Winston Graham (and also a remake of a classic 1970s series), the show is set in 1790s Cornwall, where former soldier Ross Poldark battles against vested interests to make a success of his family’s copper mine. Not an obvious ratings winner, it has been boosted by the brooding good looks and heroic demeanour of Aidan Turner, who plays Poldark. While Captain Poldark’s handsome face, enviable abs and moral rigour have led to some mockery, The Independent newspaper gets it about right when it calls the show “an addictive Sunday night treat.” Poldark may not be Wolf Hall, but it is a hugely entertaining show.

With consolidated ratings averaging around 7.5 million across an eight-episode run, Poldark has been recommissioned for another series, to be filmed in September. And there are reports that the BBC wants to tie Turner down to a long-term contract and build Poldark up as its answer to Downton Abbey. The programme also looks set to have a decent life internationally, with ITV Studios Global Entertainment licensing it to Australia, New Zealand, South Africa, Canada and Sweden. Confirmation of a second series will help ITVSGE with its further sales efforts.

Elsewhere, the international drama community has been keeping a close eye on the Nordic territories after a run of recent successes. The latest show to watch out for is Acquitted, a 10-part series from Miso Films for TV2 Norway. Acquitted follows the story of Aksel Borgen, who left his native town after being cleared of the murder of his high-school sweetheart. Twenty years later, he returns to save the place that once turned its back on him – but the past has not been forgotten.

Acquitted has rated well for TV2, with its first six episodes averaging 649,000 (55% up on the slot average). This week it also premiered on SVT in Sweden, where it achieved similarly strong ratings. With more than one million viewers (30.5% share), Acquitted ranks as of the most successful foreign dramas to have launched on SVT over the last five years. Miso Films co-founder Peter Bose says: “In an industry where we’re constantly hearing about viewers migrating to non-linear platforms, Acquitted has been quite an achievement on SVT.”

Ratings, of course, play a huge part in deciding whether to renew a show. So it’s no real surprise to see ABC US cancel Revenge after a couple of seasons of modest ratings. It seems, however, that the US can’t get enough of zombies. AMC’s The Walking Dead is as strong as ever, which explains the network’s decision to launch a spin-off called Fear the Walking Dead. The CW is also having some success with iZombie, which debuted in March this year. Now halfway through its first run of 13 episodes, the show is achieving healthy ratings in the 1.7-1.9 million mark. Aimed at a younger audience that The Walking Dead, it has received a positive critical response and is expected to return. 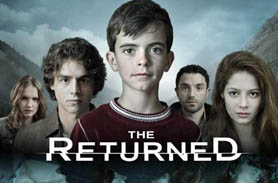 A bigger question, perhaps, is the future of A+E’s The Returned, which was eight episodes into a 10-episode run at time of writing. The Returned is a supernatural drama that explores what happens when the dead return to a small town and try to live normal lives, much to the shock and confusion of the living residents. Its significance is that it is based on a successful French series called Les Revenants (produced by Haut et Court for TF1). For those in the format sales business, it’s important that shows like The Returned do well, to avoid spreading fear among US commissioners that shows don’t transfer well into their market.

So far, ratings have not been especially encouraging, starting at 1.54 million but sliding to 0.82 million by episode eight. There are two possible explanations for this – one is that ABC has been airing a similar-concept series called Resurrection; the other is the view among some critics that the A+E show has not taken the French version forward. The Wrap calls it “a serviceable but mostly by-the-numbers remake of a brilliantly nuanced French series that didn’t need to be brought back to life in America a second time.”

A+E is not the kind of network that gives up on shows easily, however, so a cancellation at the end of season one would be surprising. Netflix will be watching developments with interest, having recently picked up the global rights to the A+E series.