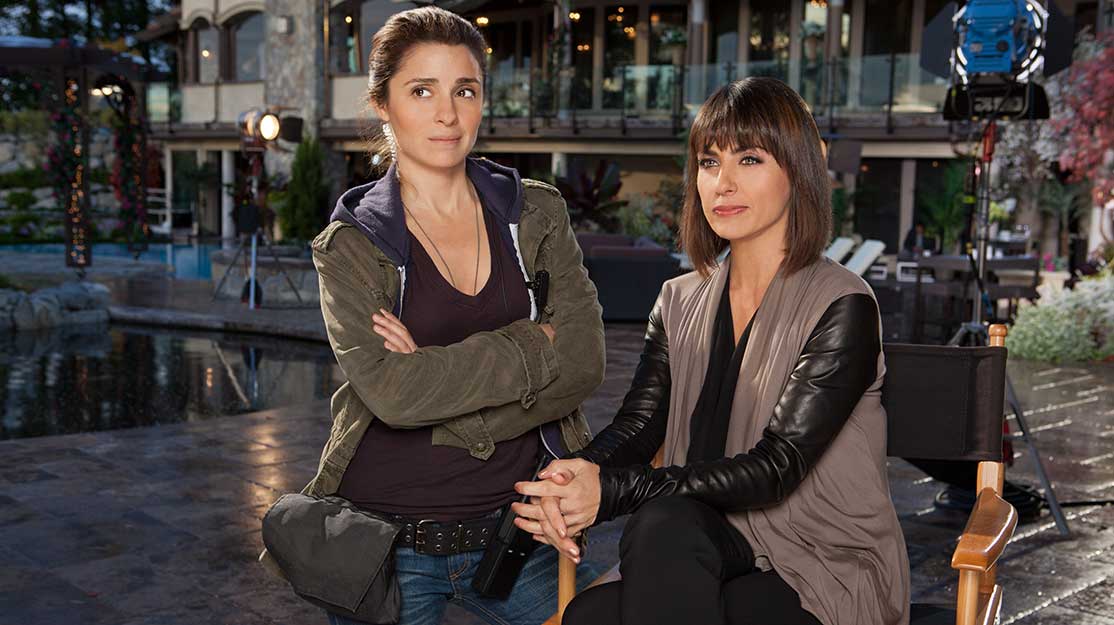 DQ talks to the team behind Lifetime’s UnREAL

It’s been one of the surprise hit series of the year – but what is the secret of UnREAL’s success? Michael Pickard reports.

From Breaking Bad to Mad Men, True Detective to House of Cards, there is a seemingly endless conveyer belt of complex – and often flawed – male characters headlining TV dramas. But one new show has turned this trend on its head and placed the concept of imperfect female heroes, and antiheroes, firmly into the public consciousness.

UnREAL, which launched on US cable network Lifetime in June and has been picked up for a second season, is set against the backdrop of a reality dating TV show called Everlasting, where young producer Rachel Goldberg (Shiri Appleby, pictured above left) is pushed to manipulate the contestants to get the outrageous footage demanded by the programme’s executive producer Quinn King (Constance Zimmer, pictured above right).

Co-created by Marti Noxon and Sarah Gertrude Shapiro, UnREAL was inspired by Sequin Raze, the short film made by Shapiro who worked for nine years as a producer of real-life dating series The Bachelor.

Noxon executive produces with Sally DeSipio and Robert M Sertner, while Shapiro serves as supervising producer and Stacy Rukeyser co-executive produces. The series is produced by A+E Studios and distributed by A+E Networks.

“It was unlike anything I’d ever seen,” says Appleby (Roswell, Girls) when asked about her attraction to the project. “The character of Rachel was a woman I’d never met – someone who had so much conflict and a really deep story. I was excited about the challenge of playing a woman who wasn’t going to be likeable and whose purpose on the show is not to serve a man. She’s on her own journey trying to find herself and find where she fits in this world. Each episode continued to interest me and engage me personally and professionally.”

The actress met with some reality show producers as part of her research for the role, and says it was “refreshing” to have the chance to play an unlikeable character.

“I’ve been lucky to work with a lot of female showrunners, including Lena Dunham (Girls), so working for Sarah and Marti was comfortable for me. What was awesome was that they were writing a show about women and allowing them to be ugly and complicated, and they weren’t concerned with making these characters likeable. That’s what was so refreshing. The response has been really gratifying.”

Zimmer (Entourage, House of Cards), who boarded the series after the pilot had already been shot, said she was initially concerned about appearing on a Lifetime drama but, after a two-hour meeting, she became convinced UnREAL would change the face of the network.

“It was a stretch for Lifetime but if any show was going to break it out, it was this one,” she says. “If this show were anywhere else, it might not have been as well received because it was so unexpected. People were hesitant – and are still hesitant – to watch a show on Lifetime, but now we’ve broken the mould. People were talking about UnREAL, and once you saw it, you couldn’t stop yourself. That was a huge compliment.”

Zimmer also admits to being a “little terrified” of playing Quinn, a no-nonsense TV producer who demands results from her team. But the challenge of the role also excited her: “With this kind of show, you have to go big or go home. You can’t do this inside reality show where no person is bad – everybody’s flawed and you have female antiheroes.

“We were embarking on a huge journey and to do it we all had to be scared to do certain things – and that’s what was so fun. Because we were all so committed to making it as dark as we could, it was challenging but lots of fun.”

Appleby and Zimmer say they were lucky to land on UnREAL together, but it wasn’t until the show was described by some critics as “the female Breaking Bad” that they realised what they were involved in.

“It just shows you there’s a lack of flawed female characters and that you don’t have to be perfect as women,” Zimmer says. “You can still have a voice if you’re not perfect. Nobody on this show was afraid to be ugly or sinister to have a voice.

“We just tapped into so many different emotions across the board. People were fascinated with the reality side of it, whether they had ever seen a reality show or not, and they were fascinated by these evil characters. That doesn’t happen very often. And because it has two women, it has this Breaking Bad quality, where Walter White was doing horrible things but you still liked him.

“Maybe if it were two men, it might not have been so impactful but because it was two women running this world and abusing other women and themselves at the same time, it spoke to a lot of people about what we all do in our daily life to women.”

With the clamour among television networks around the world for an increasing amount of original drama and the dearth of a new breakout reality or entertainment format – the last big hit arguably being The Voice in 2011 – it is perhaps a sign of the times that reality TV is the subject of a drama.

But according to co-creator Noxon, a series that not just parodies reality television but also explores how it is made was long overdue.

“I wanted to show how these reality shows are really made and the damage they do, not just to those involved but to the people who watch it,” she explains. “This culture of bully television, where you watch to make fun of people or feel superior to them – it’s really corrosive; it’s ugly. I knew it was the perfect setting for a big soapy, juicy drama but also there was a real opportunity to comment on something that has been making me really angry for a long time.”

But has Noxon been on the receiving end of any criticism for the way UnREAL portrays reality television? “The only person who’s commented in any negative way is someone who’s on the show. Everybody else I know involved in reality has secretly said to me, ‘You nailed it, that’s what it’s like,’ and that is shocking to me,” she says. “We pushed the boundaries as far as we could and to have people say, ‘Yeah, that feels like my job,’ is pretty chilling actually.

“One of the things I learned through this experience is that I was like a lot of people watching reality television – I was judgemental, because I felt people on reality TV knew what they were signing up for. Now I know, from getting into how these shows are constructed, that nobody can know what they’re signing up for. They have no idea. Unless you’ve worked on a reality show, you think you can beat the system but you can’t.”

Zimmer agrees UnREAL has “touched a nerve” with some viewers who work in the industry portrayed on the show: “They’ve been unbelievably vocal about saying how much our show is what they deal with, and that was terrifying,” she says. “I was so scared when someone came up to me and said, ‘I know exactly who you’re playing.’”

With a second season of the show due to air on Lifetime in 2016, A+E Networks has already sold UnREAL into more than 100 territories, including TF1 in France and Antena 3 in Spain.

Joel Denton, the distributor’s MD of international content sales and partnerships, recognises the show’s departure from Lifetime’s regular programming, admitting it’s not the type of series you’d normally see on the female-targeted channel.

“It’s younger, edgier, dark and comedic,” he says. “It’s not the sort of thing you’d traditionally expect to see there. It’s really pushing boundaries and it’s great to see it was such a huge critical success.

“It’s poking fun at a lot of things that go on in television and that’s fairly universal. Ultimately, it’s a workplace drama and it’s the drama and characters that drive its success. There are a lot of hooks in terms of themes and ideas that are universal.”

With viewers around the world falling in love with UnREAL, many more networks can now be expected to make a date with this hit series.