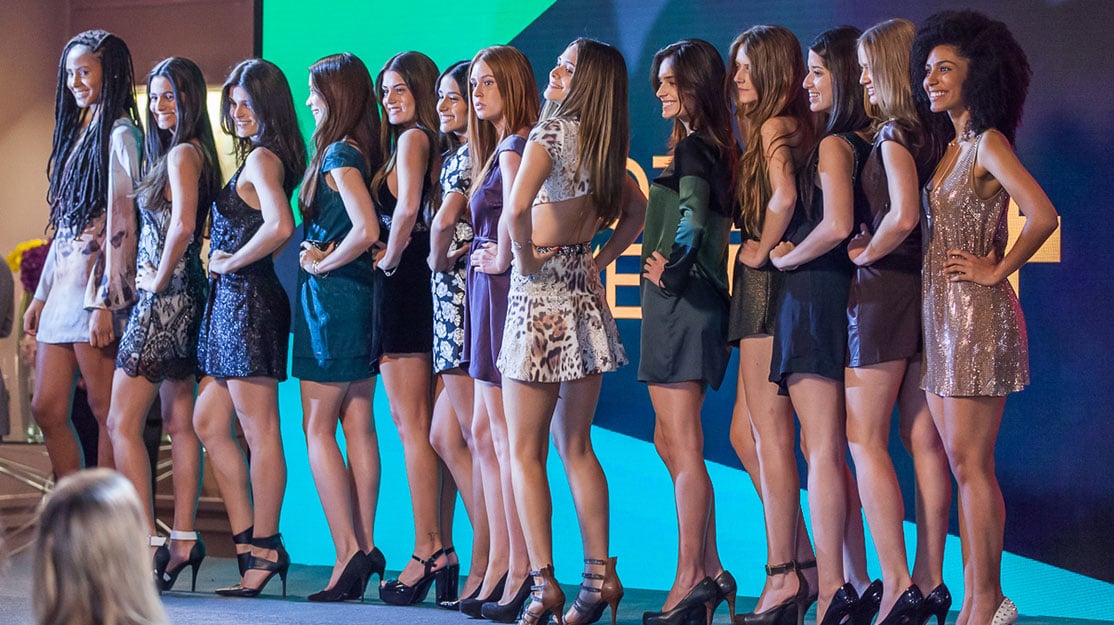 Paulo Halm and Rosane Svartman, the creators of Brazilian telenovela Totalmente Demais (Total Dreamer), discuss making the 130-hour series about a young girl who looks to escape her simple life by entering a modelling competition.

Described as a modern fairy tale, Brazilian telenovela Totalmente Demais (Total Dreamer) tells the story of a girl from a humble background who finds an opportunity to change her life and that of her family by entering a modelling contest – but winning it and becoming a star will be harder than she thought.

Elisa (played by Marina Ruy Barbosa) runs away from the home she shares with her mother and abusive stepfather to Rio de Janeiro, where she is robbed of all her money. Stuck on the streets, she meets Jonatas and begins selling flowers in bars and restaurants. But when she is introduced to Arthur, the owner of a modelling agency, he vows to turn her into a successful model. Meanwhile, Elisa starts working for Carolina, a ruthless magazine editor. Elisa is in love with Arthur, but she discovers that he is in love with Elisa.

With a running time of 130 hours, Globo’s romantic comedy takes its inspiration from George Bernard Shaw’s classic play Pygmalion as Elisa aims to achieve her dreams against all odds.

Here, Halm and Svartman tell DQ about creating the series, setting the story in opposing worlds and ensuring they have enough twists and turns for the long-running drama.

What are the origins of Total Dreamer?
Svartman: The inspiration comes from a mixture of classics from our repertoire and current issues that catch our attention. Every writer needs to seek what is latent in society, what people want to debate or would like to see and be inspired by, but that they haven’t realised yet.
Total Dreamer mixes the myth of Pygmalion, where the creator falls in love with the creature; a bit of Dangerous Liaisons, the classic by Pierre Chordelos de Laclos; and current issues and topics such as pedophilia, urban violence, prejudice, fashion, fame and overcoming difficulties through sport. The telenovela has a light tone, mixing drama, humour and romance. A telenovela can and should deal with any subject; you only need to know the right tone to enable dialog with the viewer.

How was the telenovela developed with Globo?
Svartman: Once the pre-synopsis I wrote was approved with the main plot outlines, Paulo and I developed a synopsis with the main turns of the story and arc of the characters, as well as secondary plots. The cast, set design, costumes, the tone of photography – everything inspires us and helps us to write. The rest of the writing team joined us after we had four written blocks of six episodes each. The script team always bring new ideas and contribute to the creation of stories for the secondary characters.

Why were you drawn to the idea of a modern fairy tale?
Svartman: A fairy tale is a story of transformation and overcoming adversity. We wanted our heroine to be a character who also had defects, unlike a typical princess. We wanted her to be, above all, a fighter, a heroine who achieves her goals and overcomes her challenges through effort and merit. We also wanted her to have an important love story, of course, but not just that.

What other themes run through the story?
Halm: A telenovela is made up of several dramatic nuclei that interact with the main plot but with some independence. This allows us to talk about different experiences of transformation and overcoming, reinforcing our main premise. Some of these themes are dramatic, like the story of Wesley, Jonatas’ brother, who becomes a paraplegic after an accident and ends up becoming a para-athlete.
Others are light and humorous, like the trajectory of Hugo, a lovely and loving character who everyone treats as a loser. He is in love with Carolina, who rejects him and even humiliates him, and afterwards he is abandoned by his new wife. He dreams of winning the lottery, which actually occurs, but after becoming a millionaire, he remains the upright and pure man he has always been.
In addition, through our parallel plots, we talk about issues such as homophobia, parental abuse, the difficulty of adopting a child in a country where so many orphans are without the slightest prospect of having a family, and about fame.

The series blends dark social realism as Elisa faces trouble at home with her mother and stepfather and lighter drama that introduces Arturo and Carolina and Total Dreamer magazine. How do these worlds stand against each other in the story?
Halm: It is characteristic of fables to juxtapose a gloomy, oppressive environment with another reality – one that is more solar, joyful and magical. Total Dreamer, like most telenovelas, uses this archetype to build a contemporary narrative, fanciful but with both feet stuck in reality.
In addition, the path of overcoming and transformation is intrinsically linked to the process of social and economic ascension. Elisa and Jonatas both face getting out of precarious conditions, professionally and financially, and not by a stroke of magic but through work, honesty and perseverance. Social ascension is probably, along with fulfilment in love, the desire of the vast majority of telenovela viewers. The idea of achieving these goals in an honest way, without renouncing one’s principles, keeps alive the common hope of a better life.

How do we follow Elisa through the series? Should our sympathy and support always lie with her in the hope her dreams come true?
Svartman: Just like all of us, Elisa does not always get it right. She is not perfect and often makes rash judgements and wrong choices. She is naive, for example, in believing that her mother wants to leave her stepfather, a paedophile. Our empathy comes from knowing her motivations and understanding that she learns from her mistakes.

What is your writing process?
Halm: Rosane and I work together and write each sentence of the text, sitting side by side at the computer. We are building the plots, developing the characters and then doing the scenes and dialogue ‘live,’ each one incarnating and giving voice to the characters in a very fun and dynamic way, although we are terrible actors. It’s crazy for people who have seen us work in our office.
Both Rosane and I have children so we prefer to work outside the home, in an office that later ends up becoming a writers room. We work with a team of writers of different origins and backgrounds. This team has accompanied us since our 2014 series Malhação Sonhos and includes Fabrício Santiago, a talented writer from the Vidigal community who writes wonderful characters; Cláudia Sardinha, a feminist with vast pop culture knowledge, the ideal person to write characters from the world of fashion as well as young couples; and Felipe Cabral, an LGBTQ advocate who was fundamental for scenes with the fashionista characters. Fabrício, Claudinha and Felipe are also actors – Claudia and Felipe even participated in the telenovela – which also helps a lot in the construction of the characters.
We also had veteran writers like Mario Vianna, with his sophisticated and corrosive humour, and Charles Peixoto, one of the most talented and experienced screenwriters at Globo, with a parallel and renowned career as a poet, who helped us by supervising the scripts.
With this team of talent, it was very pleasant to work. We made and distributed the cue sheets among the writers so they would make a first draft of the scenes, which we would then rewrite for the final scripts.

How do you ensure you have enough story to fill 130 hours of television?
Svartman: The more turns there are in the synopsis phase, the better. The biggest problem of a telenovela is having what is commonly called ‘belly,’ which is when the main plot doesn’t seem to advance. We already knew what the main and secondary plot twists would be. The secret is to plan well and seek strong secondary stories that can sustain the show if the main plot needs to move more slowly.

How did you work with the director on the visual style of the show?
Halm: The look of the telenovela was created together with director Luiz Henrique Rios and other team members, such as photographer João Tristão, scenographer May Martins, costume designer Rô Gonçalves and the editor-in-chief, Paulo Maia, among others, who are among the talents we’ve been working with since Malhação Sonhos.
This continuity and intimacy generate a visual identity that characterises our work. Both Rosane and I are also directors ourselves and we know the audiovisual language, the visual construction of a scene, the decoupage, the rhythm of the editing, the importance of the colours of the scenery and costumes. Always respecting the creative command of Luiz and of the other partners, we contribute whenever necessary to recreate our text in the best possible way.

Why might the show also appeal to international viewers?
Svartman: The international appeal comes from Total Dreamer being a good story well told, which sounds obvious, but it’s not. The marriage of talented actors, an inspired director with a team in tune, and a passionately written script doesn’t always happen – I speak from experience. In addition, it’s a story that has ingredients that allow for reflection, but it also inspires and invites fantasy. In a world with many problems, this invitation is often all we need. Through Elisa’s adventures, disasters and victories, the viewer has the opportunity to leave this world for a while, and even to reflect on it later.

Are telenovelas as popular as ever in Brazil or are shorter series becoming more common?
Svartman: Telenovelas remain very popular, as audience numbers prove, even amid the fragmentation of content, platforms and screens. In addition, we can already observe the influence of melodrama, one of the pillars of the telenovela, on serialised series.

How is Brazilian drama changing as it becomes more popular around the world?
Svartman: The first Brazilian telenovela, by Walter Forster, was aired in 1951 and its great novelty was a kiss on the mouth! Today, it is almost impossible to see a telenovela episode without a kiss. Besides, [in telenovelas of the past] there were no secondary stories, the pace of the narrative was much slower, the episodes were shorter and there were no scenes filmed outside the studio.
Telenovelas have always adapted to their greatest transforming agent: the audience. And this audience is global. At the same time, due to the industrial pace of a telenovela, every creative chain is based on the writer. The writing is the beginning of everything, and once the telenovela begins, any interference or change takes time, hence the power of the writer.
In addition, telenovela writers are increasingly influenced by what happens in the world, and it is their sensitivity that dictates the narratives. A telenovela writer is not alienated from the world in an ivory tower, so it is through them that the changes in the telenovela, whose format is always being updated, occur.