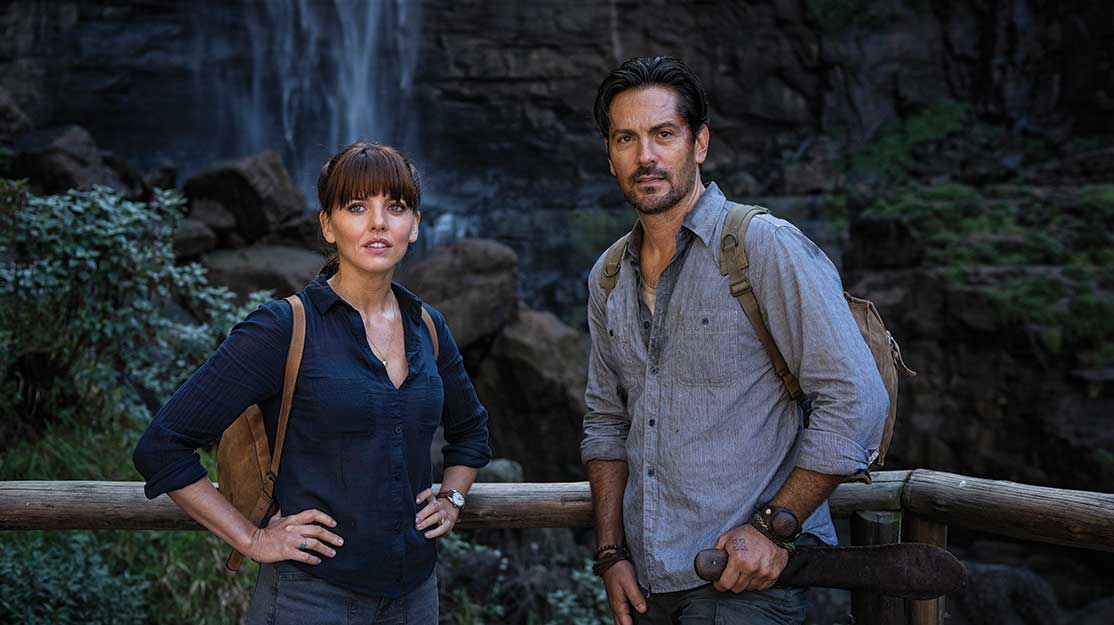 Hoo’s the man: DQ goes on an adventure with Hooten & The Lady

The team behind globetrotting new drama Hooten & The Lady want viewers to escape reality with a mix of daring adventures and intriguing characters.

In television, adventure series can be something of a poisoned chalice. As our heroes cross the globe in search of secret treasure, historical remains or ancient relics, only a few have lived up to the popcorn capers enjoyed by Indiana Jones and tomb raider
Lara Croft.

US series Warehouse 13, Alias and The Librarians have enjoyed success, while the Tia Carrere-fronted Relic Hunter was cancelled after completing its three-season contract. UK drama Bonekickers was buried after just one season.

Now comes Hooten & The Lady, an ambitious new series that follows the adventures of maverick Hooten and fearless historical expert Lady Alexandra Lindo-Parker as they travel the world in search of hidden treasures from the past.

From the mythical Amazonian golden City of Z to the Buddha’s missing scroll and the tomb of Alexander the Great, each episode in the eight-part series follows the duo on a new adventure through jungles, deserts and underground cities.

“Adventure is seen everywhere as a movie genre because television sometimes struggles with the lighter tone a show like this needs,” explains series creator Tony Jordan. “Luckily, that’s my style of writing, that’s what I do.

“There’s nothing else in this space. That’s what’s exciting about it. I love films like African Queen and Romancing the Stone – but I haven’t got anyone with a hat and a whip!”

Hooten & The Lady is fully funded by broadcaster Sky1 and distributor Sky Vision, which has given Jordan the freedom to push the series to its limits while taking in locations such as Rome, Moscow, Cambodia and Cape Town. It’s a huge undertaking for his production company, Red Planet Pictures, but Jordan says this show represents the kind of television he has always wanted to make.

“I’m a bit fucking fed up with serial killers,” he admits. “I’m fed up with how many different ways you can kill someone and how fucking long you can draw out finding out who killed all those children. I don’t mind that, let’s do that as well, but there was a time when television had both ends of the spectrum. There’s nothing like ‘Hooten.’

“When people have done this genre in the past, I always feel like they’ve tried to make an excuse for it. So they thought, ‘We can’t just do fun or adventure, can we make it supernatural?’ The thing about Hooten & The Lady is we’ve said there’s no supernatural. These are real things they’re looking for – the lost city of Eldorado in the Amazon, the missing scroll of Buddha, the lost tomb of Alexander the Great. All these real things, but with romance and imagination. You want to be with Hooten and the Lady. You just want to spend time with them and watch ordinary people in extraordinary situations.”

With a £2m (US$2.64m) budget for each episode, the show is also filled with an array of dazzling stunts. “We’re killing the actors on a daily basis,” jokes Jordan, who co-writes the series with James Payne, Sarah Phelps, Jeff Povey and Richard Zajdlic. “As a writer and producer, I want to do big shows. I want to set the world on fire.”

Having previously appeared in shows including Upstairs Downstairs, Love Soup and CSI: Miami, Landes has enjoyed “the adventure of a lifetime” starring as Hooten.

“It’s got a bit of the Indiana Jones-style genre and treasure hunting,” he says of the show. “There’s a bit of mystery about Hooten, which is fun. Tony gave me a whole backstory. Audiences want more than banter and we slowly peel away the story. You don’t even know his first name. He’s a mystery man and Tony does a great job to reveal his story.”

Landes jokes that while he’s “no Tom Cruise,” he enjoyed the opportunity to do his own stunts as often as possible – though on one occasion he was left grounded when the script called for a skydive.

“The action stuff is fun but it’s physical and that becomes tiring,” he explains. “Fighting in a helicopter sounds like a great idea but after 10 hours it’s physically demanding. Just the
grind of working all day every day, you have to have stamina.

“But I love to travel so I enjoyed that aspect. We went to the Kremlin and I love Rome so spending a week there was great. I got to travel through the city with a police escort on the back of a Vespa.”

“I watched Michael for years,” Jordan says of his leading man. “He’s this clean-cut American boy and I thought, ‘One day someone’s going get hold of him and mess him up.’ But no one ever did. So when Hooten & The Lady came around, I got hold of him and he’s a revelation. He’s a movie star.”

On Lovibond, the writer adds: “I was always a huge fan of Ophelia – she’s just got this quality about her; she’s really watchable. I think she’s got a touch of Katharine Hepburn about her. And then you put them together and watch Hooten & The Lady and you think you’re watching a movie. The dynamic between them and the way they spark off each other – American alpha male adventurer cut against an aristocrat lady – it’s great, it’s fun.”

The task of creating the world of Hooten & The Lady was handed to Michael Ralph, a long-time collaborator with Jordan who has previously worked on Red Planet series Hustle, Death in Paradise and Dickensian.

Ralph says he was immediately thrilled at the concept of Hooten, which he compares to Saturday-night matinee adventures shown on television during the 1950s and 1960s.

His challenge, however, was to create locations and sets around the world that viewers hadn’t seen before. “That meant we had to go deeper underground and further into the jungle, and higher and farther away,” he says.

“People are willing to embrace that and the genre means you can get away with more and have a rollicking good time. Scale was everything for me on this show – but people also have to believe it. That was the key.”

Alongside location shooting, Cape Town doubled for the desert, the Himalayas and the Egyptian city of Alexandria. For one scene that featured a village found on the edge of cliff, Ralph and his team built the set beside a dam and reservoir in the mountains.

“The characters are larger than life and where they go is more adventurous than ever before,” he says. “I had licence to create locations as big as the characters. Once I did the concept art, people would say, ‘Does that exist?’ and I would say, ‘No, but we can do it.’ People got such a thrill on the set. The actors thought they had walked into a 1940s black-and-white film and expected to see Lauren Bacall and Humphrey Bogart. That’s the joy of it.”

For another scene in which Hooten falls through a rope bridge, a quarry was found to double as a deadly gorge. The steel frame of the bridge was subsequently pre-built and then transported by road to the location 12 hours away from the production base.

“Sometimes we have got to stop people from being too serious and remove them from the concept of realism,” Ralph says of Hooten & The Lady’s escapist ambitions. “It was like doing science-fiction for me because that’s the most exciting form of design. No one knows what it will look like. It’s something I can invent. I had the freedom to create a fantasy. Don’t do it by numbers, do it by heart.”

Working with Ralph was locations manager Luke Longmore, who says the concept of the series “took my breath away.”

“A massive amount of research is part of it,” he says of his role. “Most of the locations I hadn’t been to, but Google becomes your best friend. You research pictures of locations, but you’ve also got to understand the different lifestyles and cultures. You start with the research and then you marry the script to what you’ve researched and then try to find a local location. And once you’ve found it, other elements come in like logistics, permits and catering.

“With Hooten & The Lady, it was very challenging. It’s 90% planning, 10% work. When you’re shooting in the Cambodian and Amazon jungles, you’re dealing with the rain and trying to keep everyone warm and dry. Each location has got its own challenges but we had a fantastic production team and locations team, which made my job much easier.”

In practice, the real locations were used for exterior shots, while matching landmarks were found across South Africa for other scenes.

“Michael Ralph is a master of it,” Longmore continues. “He had seen most of the locations and we would take his lead on it, knowing what he wanted and trying to marry locally in South Africa with what was needed and what he required. Marrying up locations was fun. We’re privileged and blessed to have the whole world in South Africa. You can be in Bangkok or in the jungle.”

Landes adds: “The production value of it was very ambitious and we accomplished a lot during the seven-month shoot. When we call it a globetrotting, treasure-hunting drama, it really is. Alias never left the lot. There’s no faking what we did. It’s going to be a fun adventure.”

As networks invest in drama to define their channel, it’s this fun adventure that Jordan believes could become Sky1’s calling card when it launches tomorrow. “Look at what Mad Men and Breaking Bad did at AMC, and House of Cards at Netflix,” he concludes. “Sky Atlantic has done really well with the HBO vibe but then you think, ‘What’s Sky1?’ I think Sky1 is Hooten & The Lady.”