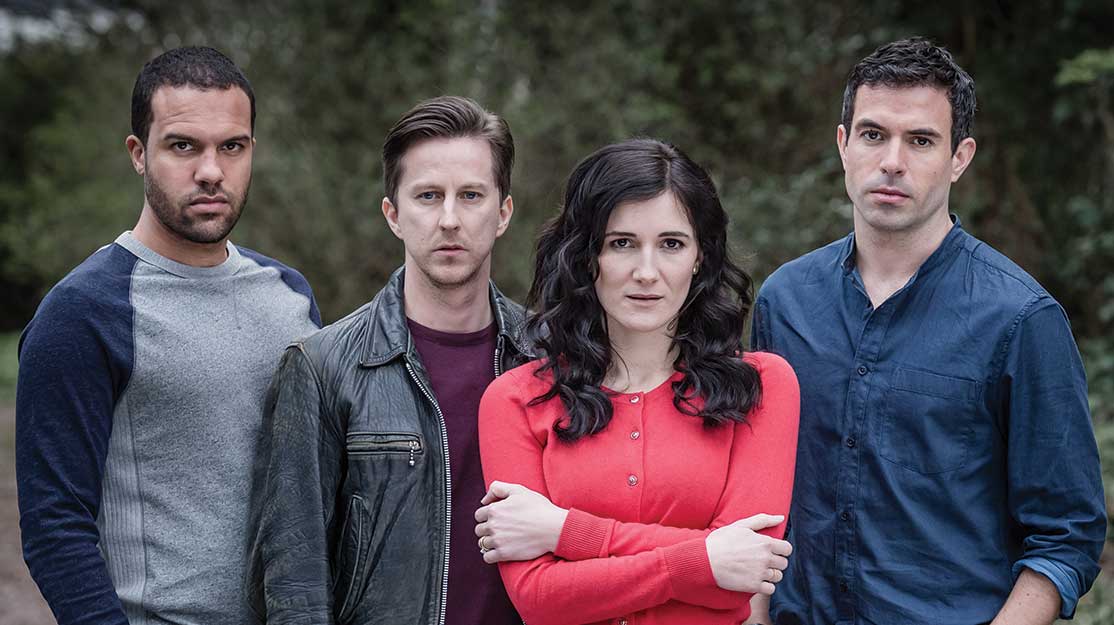 Prolific author Harlan Coben says he’s ‘shooting for greatness’ with The Five, his first original TV series. DQ talks to the novelist and others behind the production and finds out why they’re convinced they’ve got their hands on a five-star hit.

A group of friends are haunted by the disappearance of a young child years earlier while he was in their care. Now they are forced to revisit their past when the missing boy’s DNA turns up at the scene of a murder.

If you thought this sounded like the gripping plot to the next story by author Harlan Coben, you would be right. Only this isn’t a book that’s heading straight to the top of the New York Times Best Seller list.

Instead, it’s the chilling set-up to The Five (pictured above), the novelist’s first original story for television.

The 10-part series stars Tom Cullen, O-T Fagbenle, Lee Ingleby and Sarah Solemani as four friends who are forced to confront their past when a terrible childhood tragedy comes back to haunt them.

Produced by Red Production Company and distributed by StudioCanal, it is due to air on Sky1 in the UK in early 2016.

Mystery writer Coben has penned more than 25 novels, with more than 60 million copies in print worldwide. His books have been translated into 43 languages.

But 25 years since his first book, Play Dead, was published in 1990, he has now written for television for the first time.

Coben says he was first approached about working in TV by Red founder Nicola Shindler, an exec producer on The Five, and he happened to have an idea for the perfect show.

He explains: “I had this idea that I was thinking of writing as a novel but for some reason I always thought that instead of writing a novel and adapting it, it would be better to go straight into making it into a TV series. I had a big idea that I always saw more visually, more spread out, on a different canvas than a novel. So I gave her the story in three or four sentences and Nicola jumped on it, and that’s how it all started.”

But what was it about this one story that made it a better fit for television? “It was mostly because there are more lead characters,” Coben says, “but partly because I always saw it visually. The idea of these five kids playing in the park, four of them supposed to be watching the younger one. They kind of make fun of him. And I could almost see in my mind the kid crying and running down the path, never to be seen again.

“These four kids have to spend 20 years growing up, not knowing what happened. I could see him walking down that path. I could see the mother of that child years later looking out at that same path where her son disappeared. It always came to me very visually and that’s why I thought it would work best this way.

“I do see my novels cinematically, but not quite as much as this one. I wanted to see the lives of all four characters, but it wouldn’t make a movie. With the four characters, it would be better to have it spread out in something like this where we have 10 episodes to tell the story.”

Red’s previous productions include Happy Valley, Last Tango in Halifax and Scott & Bailey, while it is also known for working with such notable writers as Sally Wainwright, Russell T Davies and Bill Gallagher.

Shindler says: “We wanted to do something that was incredibly hooky, with a story at the centre of it that meant you couldn’t switch off and you had to watch the next episode. That’s Harlan’s novels. You get really compulsive – I have to stay up late, I have to keep reading, I have to know what happens. And it felt like to try to translate that on screen would be brilliant.”

“I’m boring company because I’m always looking off and thinking about my story. And that’s how it is with this thing. I’m completely obsessed with everything about it; we all are, frankly. Once we got into it and saw the potential for it, we just wanted to keep going.”

For The Five, Shindler paired Coben with Danny Brocklehurst (Ordinary Lies, Shameless), who is the lead writer on the project. But that doesn’t mean Coben stepped back from proceedings, despite never having previously worked alongside another writer.

“I’ve been working with Danny a lot and I know he can tell interesting stories with a lot of pace,” says Shindler. “Danny has written the script by himself but what Harlan brings is the story and the idea – the plot. Danny said it was something he was interested to try.”

Brocklehurst says he was excited to collaborate with Coben but, like the author, had only previously worked on stories he had devised himself.

“To work like this with this brilliant idea that Harlan has created but also to collaborate together, it was a great opportunity,” he says. “I would read one of Harlan’s books just before I wrote each script so I was very much in that Harlan world. Trying to write with those twists and characters in mind was a challenge but one I really enjoyed.”

Coben adds: “Nicola was the one who came up with the idea, telling both Danny and I separately that we would work well together.

“I don’t collaborate, I write my own novels. I don’t work well with others, but I’ve actually been shocked at how in sync Danny and I are, how our sensibilities are so similar, and how we’re brothers under the skin in terms of this. There will be times when he’s writing and it’s like I wrote it – but better. When we were meeting, we realised we really have the exact same vision for what this show should be. That really helps.”

To demonstrate their working relationship, Brocklehurst recalls a moment on set where he was required to rewrite a scene: “Harlan sent me an email making some very amusing suggestions, which I very quickly typed up. So sometimes there’s been this very close collaboration where you get to a point where you don’t know where an idea came from. There are just so many ideas swirling around. But it’s been great. It’s been a really healthy collaboration.”

Shindler adds: “We told the crew all the way through that they’ve all got a mental bumper sticker that says, ‘What would Harlan do?’ and it’s really helped. Reading his books before you make any decisions also helps because it’s kept it different and ensured the show feels like it’s one of his stories. Our fear and Sky’s fear was that it would just fall back into that British way of storytelling, which we didn’t want.”

As well as forging a writing partnership, The Five also goes against the grain by having one director – Mark Tonderai – take charge of all 10 episodes. This, says Shindler, has removed any differences in style that can occur if new directors are brought in at different stages of production.

“It’s really unusual, but we have longer prep weeks between each filming block and the actors have loved it because they’ve had one person giving notes,” Shindler continues. “We’ve loved it because we understand what Mark’s trying to do and what to push him on. It’s hard when a director comes in halfway through and tries to pick up the style, so we’ve not had any of that. That’s really what’s set it apart on the set. Mark described it as making a film each week, and that’s what it looks like. He’s so cinematic in his approach.”

Though The Five is Coben’s first original story for television, it is not his first television series. He has also been working on No Second Chance, an adaptation of his own novel that has been made for French broadcaster TF1.

The six-part action thriller, produced by VAB Production and distributed by TF1 International, tells the story of a woman (played by Alexandra Lamy) who wakes up from a coma to discover her husband has been murdered and her baby is missing. Suspected by the police and on the run from hitmen, she turns to a former criminal investigator – who is also her first love – to help find her daughter.

So why has it taken Coben so long to turn his attention to television? “If I’d tried making a series 10 years ago, you may have wanted a procedural with a weekly crime, that sort of thing,” he says. “That would hold no interest to me. But this is a new canvas I can tell the story on. No one has to push here, there’s an ambition we all share.

“I don’t need to have a TV series, I can continue to write my novels. We’re shooting for greatness or there’s no point. We’re not shooting just another TV show. I don’t need it, the rest of the team doesn’t need it. So that’s something we’re all sharing on The Five. We all want to do something a bit different.”

The author also compares his experience writing for television to that of writing a novel as he immerses himself in the world he is creating: “It’s how I work when I’m obsessed with something. I don’t know how to take my foot off the accelerator. I’ve probably made some of the crew a little crazy by this stage of the game. If they thought I was just going to be a name on the credits, they were sadly mistaken. So that obsession is just how I work.

“It has been more fun than I thought. I didn’t think I would enjoy collaborating as much as I have, but I have loved it. I’ve loved working with the actors and trying to talk to them. Mark was a wonderful director, and Danny, Nicola and I have also had a great deal of fun trying to make this happen.”

Coben’s move into TV wasn’t just about finding the right story, however. It also had something to do with the creative partners he was able to link up with and the freedom he would be given to bring his story to life. That, says the American author, is why he chose to work in the UK and France, rather than within the US studio system.

“The opportunities presented themselves at a time when I was open to the idea,” he explains. “I’ve probably been given more freedom than I would have been given in America. There’s notes and all that stuff but they’re minimal. I’m not going to say, ‘Oh the network made me do it this way and that’s why it didn’t work out.’ I’ve been able to do what I wanted, and that’s more important to me than what country I’m working in.”

On a similar note, Shindler says the UK drama business in particular is enjoying something of a high at the moment as broadcasters open their doors to new ideas. “Sometimes you get really annoyed, but on the whole it’s really healthy,” she says of the industry. “There’s no prescriptive notes about what people need anymore. We’re not told at 21.00 on a Wednesday night people will only watch dramas that do this or that. Now all the broadcasters constantly give us ideas, so it’s brilliant for us.”

Brocklehurst adds: “There’s a lot of competition out there now and that’s driving ambition. All the channels are having to up their game because of what others are doing, and that can only be a good thing.”

If The Five turns out to be as gripping as one of Coben’s bestselling novels, the chances are that viewers won’t have to wait another 25 years for his next original TV series.