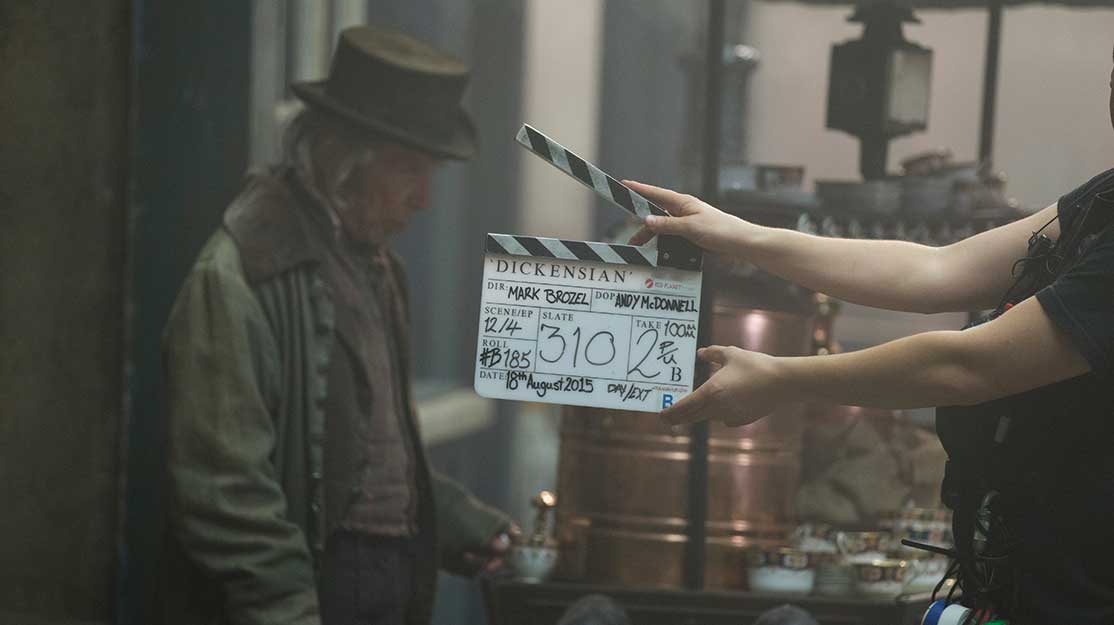 Great Expectations: On set with the BBC’s Dickensian

Tony Jordan has brought together some of literature’s best-known characters in a celebration of Charles Dickens. DQ went on the set while Dickensian was still filming to find out why those behind the show were sure of its success.

He’s the revered author of such classics as A Christmas Carol, Bleak House, Oliver Twist and Nicholas Nickleby.

But what would it be like to peer inside Charles Dickens’ mind and bring the characters from his novels – Fagin, Scrooge, Mrs Gamp, Miss Havisham et al – into the same world?

Wonder no more, because that’s exactly what Tony Jordan has done with Dickensian, a 20-part, 10-hour drama now airing on BBC1.

Set within the fictional realms of the author’s novels, Dickensian brings together many of Dickens’ best-known characters as their paths cross in 19th century London.

Yet while viewers can enjoy spotting characters from different novels, another character that may receive less attention is the set itself. Described as a working set, its exteriors are joined to its interiors to create an all-encompassing world where The Old Curiosity Shop sits next to a fully functional Three Cripples pub.

The set was built inside a huge warehouse on a nondescript industrial estate in north-west London, inside which you are instantly transported into Victorian London. When DQ visits, it is dusk, with only the glow emanating from the Three Cripples providing light outside. Shops are painstakingly detailed along Market Street and as you walk across the cobbles, you can pick out such stores as Mantalini’s (Nicholas Nickleby) and The Old Curiosity Shop and the office of Scrooge and Marley (A Christmas Carol).

Inside Satis House – the town house belonging to Amelia Havisham and her half-brother Arthur (Great Expectations) – statues line the hallway and chandeliers hang from the ceilings, with a dining table laid for a feast. In contrast, Fagin’s den is dark and dingy, with barred windows keeping out the light.

The scale and scope of the Market Street set is breathtaking – and it needed to be, says Jordan, who began working with production designer Michael Ralph before a script had even been written. “I had to build the world. That was key to making it work,” he explains. “I didn’t think it would work like a traditional show with a bit here and a location there. Dickens used atmosphere almost as a character – there’s always mist, smog and snow. So building the world became the only way to make this work. That’s what we’ve done.

“Satis House is in there, a church, the Three Cripples pub. I’ve got horses and carriages going round. It’s crazy beyond belief but that makes it a magical place to work and it’s created this family-company atmosphere among cast and crew.”

Jordan says that for Dickensian, which cost more than £1m (US$1.5m) an hour to produce, he tried to delve into Dickens’ imagination: “It’s all Dickens’ characters, all his stories, everything he’s ever written, but inside his head they’re allowed to mix up and to have slightly different outcomes. Timelines can mix, stories can mix, characters can mix. One story can affect another.”

The writer admits he’s not a Dickens scholar, joking that his starting point was The Muppet Christmas Carol. But by working with Dickens experts, Jordan ensured he remained faithful to the characters while bringing viewers stories never seen on screen before.

“Every time you’ve ever seen Miss Havisham, you’ve only ever seen this mad bird in a dress and a veil,” Jordan says. “But do you really need to see another adaptation of that? There’s a passage in the book where Pocket explains to Pip the history of Miss Havisham and how she had a half-brother who felt cheated after the death of their father and conspired with a man called Compeyson to steal her money. It’s still faithful to the story, the character and the spirit of what Dickens wrote but you haven’t seen that before. You haven’t seen the young Miss Havisham, falling in love, meeting that man. We see her on her wedding day – that’s exciting.

“As a writer, writing the scene between Ebenezer Scrooge and Fagin, that’s sexy stuff. I don’t care about broadcasters. Buy it or don’t buy it – I’m gonna write it anyway. I’ll do it on a Saturday morning. (Before I started) I thought somebody must have done this already, but they hadn’t. It was like Christmas. I felt like Bob Cratchit on Christmas Eve.”

Jordan and Ralph previously worked together on Death in Paradise, Hustle and The Ark, so before the script stage of Dickensian, Ralph created some artwork and even built a model of the main Market Street set. Jordan was then able to use that in his writing while the full-size set was being built.

“There’s no way you would know this show is filmed entirely on a set,” Jordan says. “It doesn’t feel claustrophobic, you’re just wondering where the fuck it is because it looks stunning. There’s no way you’d know, and that was really important.”

Ralph describes Dickensian as the “biggest and most ambitious series” he has ever worked on, adding that he was thrilled to work on a set where every element of weather and lighting could be controlled. “I delight in delighting Tony, finding him what he wanted when he wrote it and what he envisaged,” he says. “I was totally released with my imagination and creativity. I had so much freedom to produce what I did, it was unbelievable.

“I dressed nearly every set individually, sometimes on my own, especially The Old Curiosity Shop. If you can spend long enough dressing a set, it feels like you’re invading someone else’s space and that’s what it was like. I won’t let anyone put anything on the set that doesn’t have something written on it that actually relates to the character. That detail does take a lot of time, but we were given the time.”

Ralph says his designs are always inspired by the script and reveals the final set was almost identical to his initial sketches and models. “With all productions these days, no one ever thinks they have enough money to do anything,” he notes. “For me, less money is what I want. It opens up a well of creativity and means people have to be more focused on what the camera is really seeing. I’m a great believer in using the camera. The camera lies like a bastard and I’m embracing the deceit. We’re making films; man-made dreams for people who are awake.”

With a starring role in fellow BBC period drama War & Peace, Tuppence Middleton, who plays Amelia Havisham, is no stranger to epic productions. But while she travelled across Europe for Andrew Davies’ retelling of Tolstoy’s classic, she says she “loved” filming Dickensian on the purpose-built set.

“As soon as we walk through the doors of the studio, you’re transported into this world,” she says. “It’s such a huge job to build an entire street. I don’t think that ever happens. I’ve never done anything that has been like this.”

Describing Miss Havisham as an “iconic character,” Middleton adds: “To a lot of people she’s this crazy old woman living in a house, who looks like a ghost and has lost her mind. Actually, she was a normal young woman once and I think that’s a really interesting thing to explore.”

Also in the cast is Joe Quinn, who plays Arthur Havisham. Quinn left drama school early to take his place in the cast and admits it was an offer he couldn’t refuse. “The story gives me a lot of creative freedom to flesh out a character that hasn’t really been portrayed before but is still in existence. He is an entitled, spoiled little brat with a bit of an alcohol problem. So no acting required,” he jokes.

Quinn says his first day on the set was “daunting,” adding: “It’s enormous – it’s a whole world. And the detail is such a testament to the craftsmen and the creative team that built it. They’ve done an amazing job.”

Viewers also meet Bleak House character Captain James Hawdon (played by Ben Starr), in a storyline that serves as a prequel story to Dickens’ novel, in which he is the father to Lady Dedlock’s illegitimate daughter.

Starr was equally impressed by the set, which he said helped him get into character: “We’re going into Mantilini’s and you can look in the drawers and there are 100 types of buttons and different kinds of fabrics. Looking around this set is so helpful as an actor. It’s a huge playground in which you get 30 actors to fool around and pretend to be Dickens characters.”

But would Dickens have ever created Dickensian? Jordan certainly thinks so. “With everything I know about him, I’m pretty sure he’d be doing this, and if not this, something very like this,” he says. “He was a showman. This is big, noisy and features all his characters – it’s a celebration of Dickens. So of course he would be doing this, and I like the thought of that.”