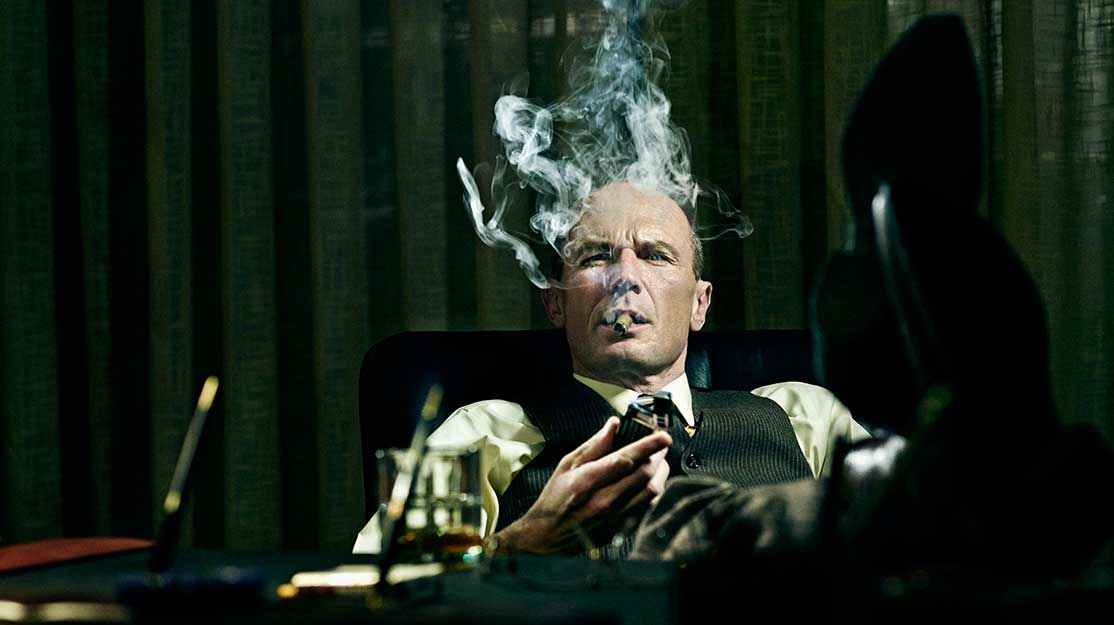 Wall-Street-lawyer-turned-showrunner Jonathan Lisco on how he aims to make the second season of AMC’s Halt and Catch Fire a hit by giving the slow-paced character drama space to breathe.

To work in television, you must watch a lot of television, right? Wrong. Well, that’s what Jonathan Lisco says. He enjoyed True Detective and is trying to catch up on Mad Men, but admits he’s way behind on some of his favourite series.

With the seventh and final season of Mad Men due to conclude on cable network AMC on May 17, Lisco may now have to wait for the box set to find out what happens to Don Draper after his own series, Halt and Catch Fire, won a second season order last August. It will air at the end of this month, also on AMC.

Halt and Catch Fire opens in Dallas in 1983, and depicts a fictionalised view of the personal computer revolution as three people come together to reverse-engineer the first IBM PC.

Lisco was brought onto the series as showrunner after signing an overall deal with the cable channel in July 2013.

But he confesses that, after meeting co-creators Chris Rogers and Chris Cantwell, he wasn’t initially blown away by its premise.

“I wasn’t sure if it was going to work and I wasn’t sure I was the person to run it,” he says. “On its face, the show was about the cloning of the PC and that’s not something that immediately blows your hair back dramatically.

“But once I realised the show was not just about the cut-throat computer business of the early 1980s and convinced myself it was about people at war with themselves as they searched for something bigger in the world – about these geniuses or frauds who feel that there was something more out there that they can’t quite wrap their minds around – it seemed to me to not only be great fodder for storytelling but also very relevant to people today.”

Like Mad Men, which is set in a 1960s New York advertising agency, Halt and Catch Fire places huge emphasis on character development – something Lisco says could only be done at AMC.

“AMC will tolerate and encourage a slower burn than a lot of other places,” he says. “That means if you want to have moments where characters don’t speak, you can do it. You can choose those moments, earn them, and make it happen on screen.

“I feel sometimes like those are the moments that live most with audiences, those moments of intermittent vulnerability where you’re getting a window into that character. That’s a hard thing to do when you’re keeping the plot going at breakneck speed.”

Season one of Halt and Catch Fire often received critical acclaim, though viewing figures failed to reflect its promise. The series launch drew 1.19 million last June and dropped to 570,000 by the end of its 10-episode run at the beginning of August. Despite this, AMC saw enough potential in the series to bring it back for another season.

“It would be completely disingenuous for me to say that the network and us wouldn’t love to have artistic success alongside also being a ratings juggernaut,” says Lisco. “That’s a home run and we’d all love that. On the other hand, AMC picked up this show even when it was not a ratings juggernaut. It was widely viewed as high quality; it had a passionate core audience and they felt that it was good storytelling, and that there was more potential to come.

“So, with that in mind, they renewed it for another season. But it’s absolutely true they don’t necessarily need the kind of ratings the broadcast networks are looking for.”

With the show’s second run soon to hit TV screens, Lisco says season two offered him and his team of writers a chance to take the programme forward after establishing the characters last summer.

“In Halt and Catch Fire, the concrete plot is very important to us, but it’s much more important that the show functions on an infra-red emotional level so, before people even know it, they start to love and hate our main characters, while becoming addicted to them. That’s what we’re striving for, and while we feel like we accomplished a lot of that in season one, we’d just laid the pipe. We’d just established the world and these characters and all their wonderful facets, and I think there is an extraordinary amount of terrain to cover with them still.

“We kept a very open mind with this season, because sometimes in the room, the characters start speaking to us instead of us constructing them, and that’s when the magic really happens.”

A former lawyer, Lisco quit Wall Street after six months. “I looked ahead of me, saw all the partners at the firm, and I didn’t want to be any of them,” he says bluntly. “I felt daily like my soul was out of its socket.”

Waiting on tables in New York, he found he would often be serving the people he had been having conference calls with in his previous job. But after writing a play, he was introduced to executives at Robert de Niro’s Tribeca Film, where he sold a movie pitch.

Lisco landed his first TV job when he joined the writing staff of NYPD Blue. Co-creator Steven Bochco had read his play and offered him a job, despite the new recruit admitting he had never seen ABC’s long-running police series.

He then worked on The District, another cop drama, this time on CBS and set in Washington, DC, on which he rose through the ranks and began spending time in the editing suite.

Lisco joined Jack & Bobby, a one-season show on The WB Network about two brothers, one of whom would later become president of the United Sates, before signing a deal with 20th Century Fox that led to two projects for the Fox Network – a legal pilot called Damages and his own series, K-Ville, which focused on policing in New Orleans in the aftermath of Hurricane Katrina. It ran for one season, but production shut down during the 2007/08 Writers Guild of America strike and it was later cancelled.

Lisco then joined TNT’s critically acclaimed cop show Southland as an executive producer for three seasons, before landing the showrunner post on Halt and Catch Fire.

“When it’s at its most exciting, there’s nothing quite like it,” says Lisco of the TV business. “The best moments come when you’re on set and you’ve written a scene that’s exactly the way you’ve seen it in your head.”

After AMC confirmed Halt and Catch Fire’s second season, Lisco rallied his staff and reopened the writing room at the end of last September.
“Everyone runs the room differently but the way I run it is to get in there and go deep, not on story but on character,” Lisco explains. “We talk on an emotional level and on a character level for a month before we actually start plotting out stories.

“Story points come up and we slap them on a card and put them on a whiteboard. Anyone who walks in there thinks we’ve all lost our minds, but what we’re really trying to understand is the vulnerability and humanity of the characters we’re creating – because if that rings false, if that doesn’t feel grounded and authentic, then whatever story we tell will ring false.”

After setting out character development, Lisco and his staff get into the first couple of episodes, but he says this only happens up to a certain stage, when individual writers are asked to go away and come up with a ‘beat sheet’ – 15 or 20 points that could make it into an episode. That will then be discussed before they’re asked to go away again and create an outline for an episode.

“It’s a very collegiate, collaborative effort but I also allow and empower the writers to be real writers and bring stuff to their colleagues in the room to be workshopped,” Lisco explains. “For me, that’s the best of both worlds because people wind up feeling a lot of ownership over what’s going on.”

Lisco also served as showrunner on Southland, TNT’s police drama set on the streets of Los Angeles that came to the end of its five season run in April 2013. Season one aired on NBC.

Having undertaken this role on two vastly different series, not only in style but also in plot, Lisco is building his experience in what he describes as “probably one of the best jobs in the world.” He’s not alone, though, with Breaking Bad’s Mark Johnson and Melissa Bernstein executive producing the show alongside him, Rogers, Cantwell and producer Jeff Freilick.

“It’s a shock to some writers, going from sitting by yourself in your underwear trying to crank out stories until the wee hours jacked up on coffee, to a point when suddenly you’re expected to be the head writer, a leader, and asked to oversee this hydra called a television show,” Lisco says of becoming a showrunner.

“For people who can do right brain and left brain simultaneously, it’s probably one of the best jobs in the world because you can be a chief novelist at the same time as being one of the managers.

“When I go in to showrun something, if I feel like my vision is going to be a daily battle against the vision of the creator or creators, I just don’t take the job. This is not my first rodeo so I’ve learnt that this is a disaster waiting to happen and there’s no point getting involved with it.

“Being the lead on the 100-headed monster called a television show, sometimes someone’s got to make the hard decision, and that will be me. But generally I try to manage by consensus as opposed to dictatorially because I feel like I can with these guys, because we are very like-minded in what we’re trying to achieve.”

Known as a dedicated movie channel, AMC broke the mould when it began commissioning its own scripted series. Mad Men debuted in 2007, a year before Breaking Bad, the lauded drama about a cancer-stricken chemistry teacher who becomes a crystal meth kingpin.

The success of that move into original programming did not go unnoticed, with an increasing demand for dramas among cable and digital platforms, not to mention the ongoing fight among the broadcast networks for viewers each autumn.

Lisco describes the fall-out from this demand as a “double-edged sword,” drawing parallels between an increasing number of outlets for scripted series and falling labour prices.

“On the one hand, while there are more outlets for content, there is downward pressure on prices and staff numbers in general are getting smaller,” he says.

“It depends on where you are in the business. If you are in the pantheon of showrunners and you have a certain kind of reputation, there will probably always be a place for you, but it’s hard to say. The business is changing so radically every day of the week that riding the rollercoaster is just part of the fun.”