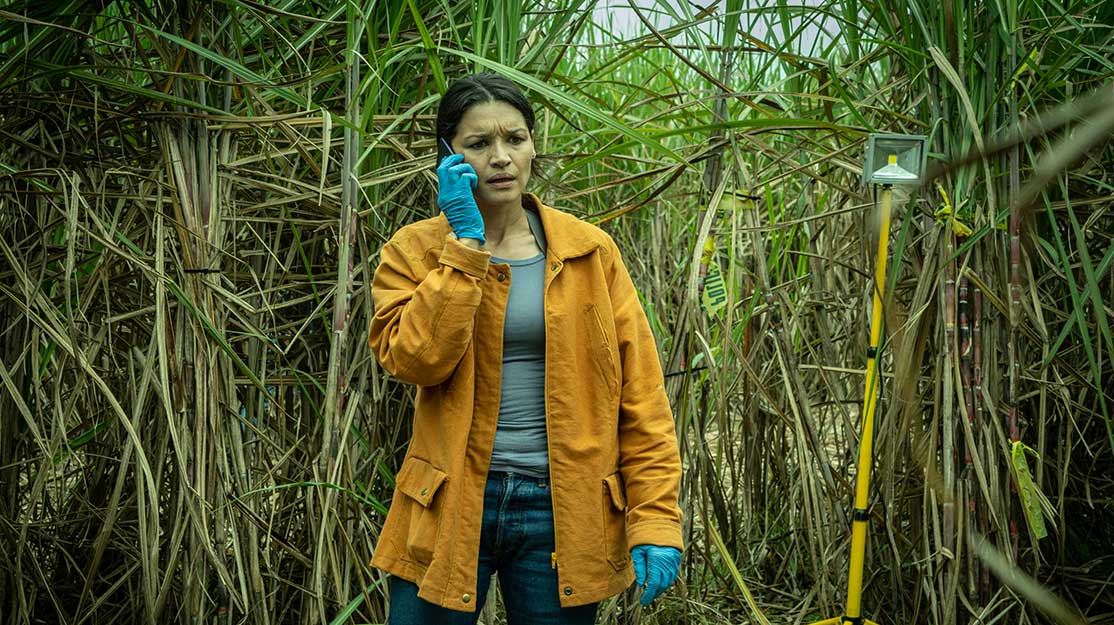 South African star Kim Engelbrecht takes DQ inside the mind of Reyka Gama, a criminal profiler struggling to come to terms with her traumatic past while trying to solve a spate of brutal murders in psychological crime drama Reyka (aka The Cane Field Killings).

From the futuristic to the fantastical, actor Kim Engelbrecht has made her name in a host of US series including Dominion, The Flash and her most recent project, season two of Ridley Scott-produced Raised by Wolves.

The latter was filmed in her native South Africa, where Engelbrecht also played the title role in local broadcaster M-Net’s psychological crime drama Reyka. The eight-part series is now airing on Channel 4 in the UK, where it is known as The Cane Field Killings.

Starring opposite Iain Glen (Game of Thrones), Engelbrecht plays Reyka Gama, a brilliant criminal profiler struggling to come to terms with her traumatic past. Abducted as a child by farmer Angus Speelman (Glen), she now uses her experience to get into the minds of Africa’s most notorious criminals as she is tasked with solving a string of brutal murders committed by a serial killer in the sugar cane fields of KwaZulu-Natal.

As well as focusing on Reyka’s hunt for a killer, the series also examines her troubled personal life, from her strained relationships with her mother and daughter to the vice-like grip the manipulative and charming Speelman still holds over her 20 years later.

“A lot of shows are cop drama or psychological thriller, but the thing that makes this show so incredible is that it isn’t just one thing,” Engelbrecht tells DQ. “It isn’t just this procedural cop drama. It’s also a story about family, about how she integrates with and has some sort of convoluted relationship with her family, and with her mum especially.

“She’s got a 12-year-old daughter, who is exactly the same age Reyka was when she was taken. And then the underlying story is her really unhealthy relationship with her abductor, somebody who held her captive, and this weird connection they have. She just can’t seem to wrench herself away from him.”

Engelbrecht first auditioned for the role of Reyka in 2018, after which the project evolved several times before the it resurfaced a couple of years later and she was asked to try out for the role again.

“It’s just one of those magical moments, being in the right place at the right time. The stars aligned and I eventually got to play Reyka,” the actor says. “She’s been such an incredible character for me because you have one thought of who she is and then she just spins that on its head and she becomes something else.

“It also shows that we as people are not just one thing, we are many things. We are facets of our experiences and we are facets of what we imagine for ourselves. The kind of job she does is so intensely intricate and she’s also very much exposed to the vile side of life. But on the other side of that, she’s trying to hold on to that humanity and trying to let go of the traces of trauma that stay with her.”

The complex psychology behind the character means Reyka is unlike anyone Engelbrecht has played on screen before – awkward and uncomfortable in social situations, yet calm and composed when faced with the challenges of her intensely volatile job.

“The main story is her trying to find the serial killer, but she’s got this strange obsession with Angus and she can’t explain it,” the actor continues. “She finds herself in situations where she has no idea why she is back in his presence. He’s got this really strange, menacing and maniacal influence on her that she can’t explain, but she plays into it. The strange thing about her is that she is a behavioural expert. She knows what to do in these situations, but when it comes to her personal life, she’s powerless in using logic and it’s unexplainable for her.

“She fears him and she feels safe with him at the same time, which is ludicrous. It’s unthinkable to think she’s gone through this and that she puts herself back in these situations.”

The other side of Reyka’s personal life details her strained relationship with her mother, who is also caring for Reyka’s daughter at a time when the character “isn’t strong enough” to be a mother herself.

“Motherhood is supposed to come naturally but it’s completely unnatural to her,” Engelbrecht says. “In her mind, she feels her daughter would probably be better off being raised by somebody else who knows better, who does it better, and her mother does offer that for her.”

There’s also the sense that Reyka’s abduction has stunted her emotional development. “Sometimes you feel that, in terms of her personal life, she still uses the logic of a 12-year-old when it comes to her mother or big emotional decisions,” Engelbrecht says. “She doesn’t really know how to think like an adult. Often when you see her having conversations or even arguments with her mother, it feels like her mother’s arguing with a 12-year-old.

Reyka has been a 14-year journey for Dickson, who created a series bible and character breakdown for Engelbrecht to study in preparation for playing the title character. The drama marks one of the first opportunities the actor has had to lead a show, and she says she was ready for anything on set, from using guns to running through the vast cane fields that lend the show its international title.

“For me, there was nothing I wasn’t OK with. I was just really happy to be there and get my get my teeth into it,” she says. “The one thing about Reyka is she’s constantly moving. If she’s not moving, her mind’s moving or her eyes are moving. She’s hyper alert, which is kind of fun.”

Filming in the middle of the pandemic, Engelbrecht found herself “completely immersed” in her character at a time of “insecurity, instability and isolation.”

“We were all on a show adhering to Covid protocols. It was my very first show [filmed] in the pandemic, so it was like a new reality that everybody was facing,” she says. Shooting the show’s intense confrontations between Reyka and Speelman then gave the actor the chance to spar with Glen, who she describes as “just the loveliest person. He’s so giving, so open and so kind. It was just a joy to work with him and those scenes were fantastic.”

More than just a crime drama, Reyka also gives viewers the opportunity to see a side of South Africa they might not have seen before, with filming taking place on location in KwaZulu-Natal, a province on the country’s east coast.

“The cane fields are incredibly beautiful. It’s quite tropical and very lush and so green, and it’s expansive – it carries on for miles and mile,” Engelbrecht says. “I also haven’t seen [KwaZulu-Natal’s largest city] Durban in that way. I’ve been to Durban before, but I haven’t been to that side of it. It’s quite magnificent and it does create a feeling of angst that moves the story forward. It becomes another character in the show.”

Among the vast array of TV crime shows, Reyka stands out because “it’s not just a procedural, it’s about family and one person trying to resolve their past,” the actor says. “There’s also this strange and convoluted history that she has with Speelman, which is quite interesting to watch. It also comes from South Africa, and it’s multilayered and multicultural. You get to see a side of the world you haven’t seen.”

As for Reyka’s place among South African drama, “the one beautiful thing about South Africa is that because we are so diverse, there are so many sides to our country,” Engelbrecht adds. “This is just one specific way that stories are told in South Africa. What’s quite cool is there’s a beat, there’s a movement, there’s a heartbeat that South African TV does have, and I hope audiences get to feel that.”