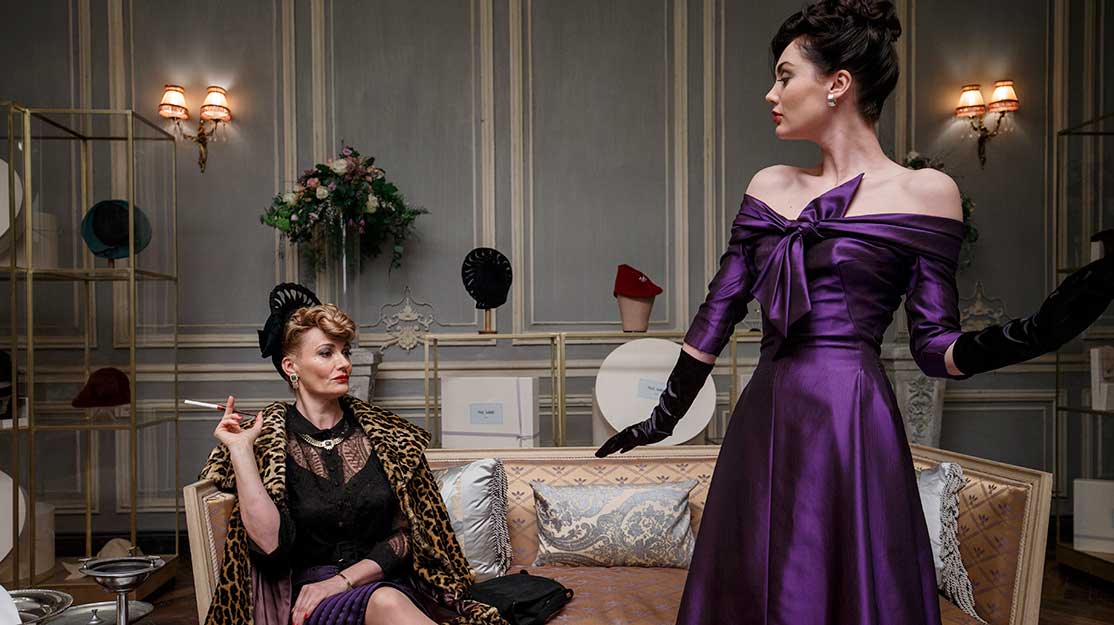 The cast of Amazon’s latest release, The Collection, open the doors to the fashion house drama.

Actors signing on to appear in a period drama can usually expect to be transported into another world by the costumes they have to wear. But that claim has never been more valid than it is for The Collection, a stylish drama set in a haute couture fashion house in 1940s Paris.

The series stars Richard Coyle, Tom Riley and Mamie Gummer in the story of an illustrious fashion house emerging from the dark days of the Occupation. Brothers Paul and Claude, played by Coyle and Riley respectively, are at the heart of the family saga, which threatens to expose the grit behind the glamour of the business they, their family and employees all work in.

“The costumes are amazing,” says Coyle, best known for roles in Covert Affairs and Crossbones. “I had to travel to Paris to be fitted to have suits made – I’ve never had suits made before. Even though the legs were far too wide for my tastes, they were beautiful suits – and Mamie’s worn some incredible things.”

Gummer, who plays Paul’s American ex-wife, continues: “Our designer Chattoune is a genius. Her scope and her appreciation for every single element and character is so specific and, for me, a costume fitting is always so informative and I’ve learned so much about my character, Helen, through that process.”

There was more to the appeal of starring in The Collection than just the costumes, however. Created by Oliver Goldstick (Ugly Betty), the series is set in a time when France is recovering from the Second World War – a period that Gummer (Emily Owens MD) says was brought to life immediately in the scripts.

“It was so engaging and I felt really pulled in by it,” she explains. “When I was done reading it, I wanted more. It was so clear from the outset that Oliver was so passionate and so well informed about every aspect of this time and of the characters – he worked on it for nearly a decade. Whenever you sign on to a television project, when you’re only given a couple of scripts to read, it is a bit of a leap of faith but I just sensed that we were in very good hands.”

Riley (Da Vinci’s Demons) picks up: “It was really visceral and there’s an element of it that, despite being a fashion show, felt kind of ugly, which was appealing. The darkness behind it, just beneath the surface, is very appealing as far as a world that seems so shiny but all that glitters is not gold.

The actor is also full of praise for director Dearbhla Walsh, who he says shared the same passion for The Collection as Goldstick. “Dearbhla was the perfect backup because she was very excitable and cared very deeply about the project and had strong opinions,” he explains. “Even if you don’t always agree with them, it’s always nice to have someone who clearly knows what they want. You can disagree but at least you can trust someone has a vision for the show. It makes you feel safer about slipping up.”

The story plays on the traditional upstairs-downstairs dynamics often found in period drama by splitting the fashion house into front-of-house and backstage areas.

“There’s a place where it’s all elegance and then there’s backstage where it’s catty and there’s a lot going on,” Riley reveals. “It’s something I don’t think has been done before; I don’t think anybody’s really opened the doors on a fashion house and said, ‘This is what it’s like.’ It’s an interesting backdrop. It’s like another character, this sense of having just come out of this incredibly shameful period of French history – it’s so fresh. Everyone’s reeling and trying to recover from it.”

Speaking to the trio, it’s clear they have an affinity for each other as well as the show they’re working on – a relationship they say came very naturally and easily to them.

Coyle reveals he first met Riley in a Starbucks just before the first script read-through: “It was a fateful meeting. I feel like we immediately slipped into an easy working relationship.”

Riley continues: “The first scene we shot was very indicative of the brothers’ relationship. I was in the bath, getting completely naked while your brother just sits on the toilet chatting to you. It really said a lot about their relationship very quickly.

“It showed a great deal of confidence from the producers in our abilities to do that kind of thing on the first day. Similarly, the first couple of days with Mamie were crazy. They gave us our biggest, most fraught emotional scenes. Normally they let you get a feel for it but they were just like, ‘Here you go.’ But we got through it. There was a lot of generosity and goodwill and care. It’s hard when you’re thrown those tough scenes straight off the bat and everybody’s getting used to everybody else. It’s really tricky to pull that stuff on early on.”

It’s not just the costumes that help transport the actors to post-war Paris but the sets as well. Although exterior shots were filmed in the French capital, huge stages were built in Wales to accommodate the sets.

Coyle says: “The production is amazing, the sets are brilliant. When you walk into the sets they’re just beautiful. It helps immensely to be able to transport yourself to where you’re meant to be.”

Gummer continues: “It’s like walking through a wardrobe. You see evidence of the ravages of war, contrasted to the stark determination to rebuild and beautify life again.

The Collection has been picked up by both France Télévisions and Amazon, which is set to launch it on September 2.

“It’s clear they care and they want to make a big splash with it,” Riley says of the SVoD platform. “The one thing that’s very different about streaming services, it seems, is they’re more confident. Despite the fact it’s a coproduction where so many people have an opinion that it ends up being produced by committee, they seem to have a lot more faith in the showrunner, saying, ‘Go and do your thing.’”

Gummer concludes: “It seems they grant a lot more artistic freedom, which is a great vote of confidence and that trickles down – the trust they place in Oliver that he’s then handed down to us. You can feel a real ownership of it, which is great.”