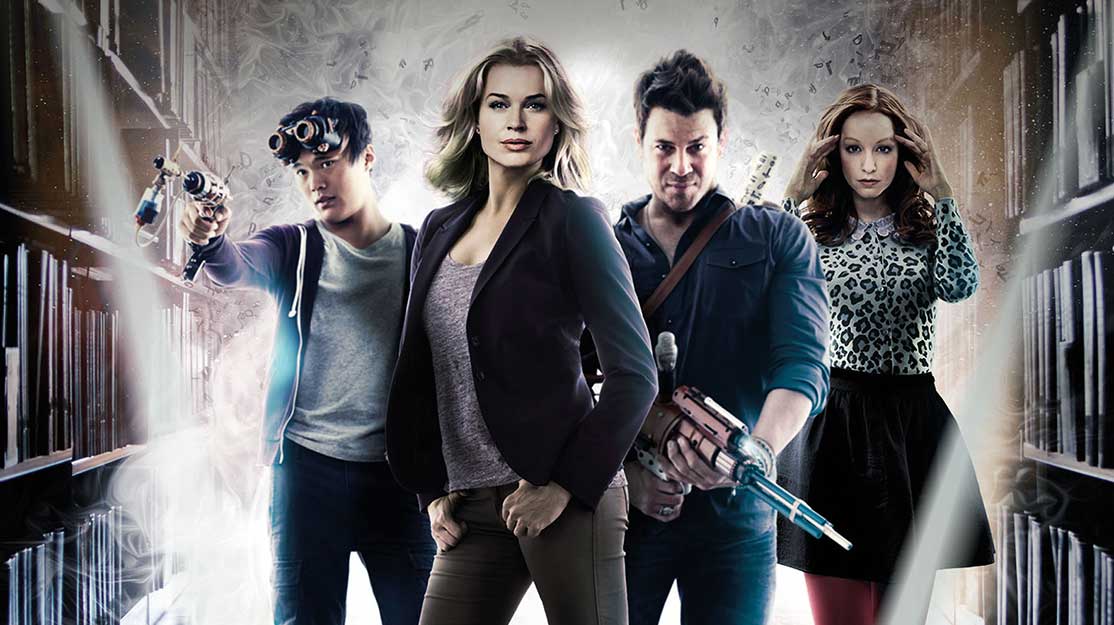 If Game of Thrones represents the brutal and bloody face of fantasy drama, The Librarians is firmly placed at the other end of the genre’s spectrum.

Based on a string of TV movies, the series focuses on an ancient organisation hidden beneath New York’s Metropolitan Public Library that is dedicated to protecting an unknowing world from the secret, magical reality hidden all around.

The group solves impossible mysteries, fights supernatural threats and recovers powerful artefacts, including the Ark of the Covenant, the Spear of Destiny and Excalibur.

The Librarians is produced for US cable channel TNT by Electric Entertainment. John Rogers, Dean Devlin, Marc Roskin and Noah Wyle are the exec producers.

“I always describe the show as a family fantasy adventure where smart people solve problems with their brains,” says Rogers, who is also the showrunner. “It’s a show people can watch with their kids, and we make a point that violence is always the last resort. It celebrates knowledge and learning. The addition of the fantastic, the magical and the mythic makes it even more fun.

“I’m a fan of Game of Thrones and the darker stuff. But if you just have a diet of nothing but that, you get bored. All we’re saying is you can have a different style of show that embraces fantasy, that embraces genre and doesn’t necessarily need to go down the dark and gritty route.”

Three films – The Librarian: Quest for the Spear in 2004, The Librarian: Return to King Solomon’s Mines in 2006 and 2008’s The Librarian: Curse of the Judas Chalice – were produced for TNT in which Wyle starred as the titular hero who protected a secret collection of artefacts.

In the subsequent spin-off, which debuted on TNT in 2014, Wyle’s Librarian was joined by four new characters who work for the library, played by Rebecca Romijn, Christian Kane, Lindy Booth and John Kim.

The Librarians returns for season two on November 1 and Rogers says the show will be bigger and better in terms of characters, plots and the effects on show throughout the 10-episode run.

“Last year was very much a welcome to this secret magical world,” he explains. “The second season asks how the characters live in it. How do they become the heroes this world needs them to be? We put the characters through their paces as they get more and more responsibility and they begin to lose the identities they assumed because they didn’t quite fit into the world in the first year.

“The effects, plot and story are also bigger this year. Last year we said magic was coming back, and it is now showing up in a way that can’t be ignored anymore. So the adventures get bigger, the stakes get higher and the mythical structure of the show expands. We begin the show learning the library is not the only magical place out there and they’re not the only magical organisation. There are other traditions, other power groups and other magic users, and we start to meet them this year.”

Rogers is best known for fellow TNT series Leverage, which he created with Chris Downey. The show, which ran for five seasons until 2012, followed a team brought together to fight government and corporate injustices. He is also an executive producer on NBC’s Las Vegas-set crime drama The Player, which stars Wesley Snipes.

But having rewritten the first and third Librarian movies, Rogers was asked to develop a TV show around the franchise, and to do so he brought together a “really eclectic, weird staff” to help develop its fantastical storylines.

The team includes writers who have medieval literature and history degrees, a biochemist, a romance novelist and a history expert, while Rogers himself has a physics degree.

“You put together the most eclectic crew you can and then tell the most interesting stories,” he says. “We throw ideas on the wall and then we just play with it. What would be the twist that makes us happy? What would surprise us? We like to tell stories from a viewer-friendly point of view.”

But doesn’t the use of magic offer an easy solution to any sticky situation in which the characters might find themselves? Rogers compares The Librarians to the recently cancelled CBS series CSI: Crime Scene Investigation, in which “you can identify every killer because of something or other. Most of the audience has no idea how that tech works – it’s effectively magic,” he says.

“We make a joke on the show at one point that magic doesn’t make sense. If it did, it would be science. All shows have problems now with magical technology but our magic has a very specific set of rules. It’s not really, ‘Are you going to solve this problem?’ It’s about how it’s going to change the character when they solve the problem, and the character’s sacrifice in order to solve the problem. That’s the more interesting story.”

Rogers also has experience writing for the big screen, having worked on Transformers, Catwoman and science-fiction adventure The Core. And while the changing economics of the movie business have made it much harder to make anything in between the extremes of a big-budget blockbuster or a small independent production, Rogers says there is plenty to like about working in television.

“It takes a long time to get a film off the ground and there are a few things that are very attractive about television – you can tell longform stories, you can spend a hundred hours with these characters and take them on a full emotional journey and work in partnership with the actors over several years,” he says.

“And we make it. We write stuff and it shows up the next day. Sometimes we write something and it airs the next day, never mind shooting the next day. You feel like you’re not just collecting script fees and waiting for your movie to get made three years from now. You’re actually making the product and seeing your vision on the screen and getting it out to the audience.”

With The Librarians heading into its second season, Rogers says the show can run for as long as TNT wants it on the air: “I always say it’s five (seasons) and out, but you want to tell a complete story. Shows can drift when they don’t have a specific end date or end goal. The Librarians tells the story of how the world changes as magic starts to creep back into it and the adventures of these people who are in charge of handling that. We may get to the end of the story and decide we want to tell a slightly different version of it, but it’s an interesting story, there are great characters and it can run for as long as they’ll let us stay on.

“When we started The Librarians, we knew what the last scene of season five was. Where we go from there – and hopefully we get to do more seasons than that – I don’t know.”