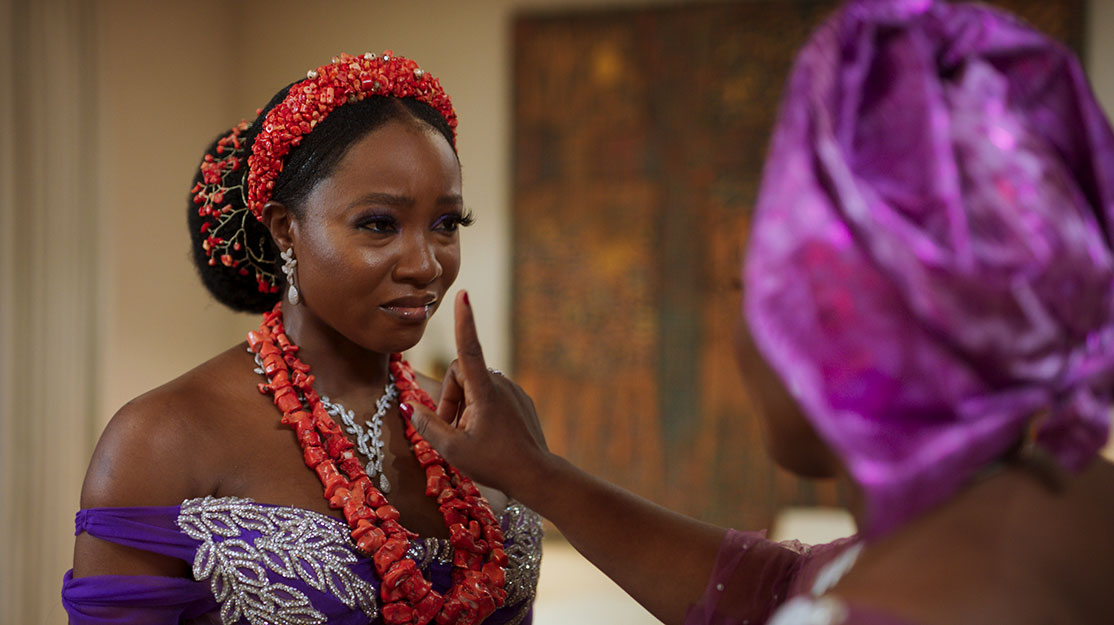 1. Story: Kemi (Nancy Isime) and Sarah (Ini Dima Okojie) are best friends for life. On the day of Sarah’s traditional engagement into a rich Lagos family, who made their fortune in pharmaceuticals, the groom, Kola (Deyemi Okanlawon), is killed by Kemi when she finds him abusing her best friend.
Instead of coming clean about the death being in self-defence, the girls decide to go ahead with the wedding ceremony. By tradition, the bride has to search for her groom, who would be hiding in the room, and take him to her father to bless the union. Of course, Kola is nowhere to be found and the wedding is called off – to the great relief of the matriarch, Uduak (Kate Henshaw-Nuttal), who wasn’t ready to welcome Sarah into the family, believing she was a gold-digger. The girls bury the body in a shallow grave that is soon dug up by stray dogs, so they have to go on the run.

2. Real locations: Blood Sisters was filmed entirely on location in Lagos, Nigeria’s biggest, most densely populated metropolis, over nearly two months. The city is estimated to have a population of more than 21 million people, so getting around is a really big challenge due to the traffic.
The fictional Yellow Daffodil Hotel was made up of a combination of locations set in the most luxurious cinema entertainment and restaurant complex in Lagos and Ebonylife Place in combination with a small annex boutique hotel, The White Orchid.

From filming at one of Lagos’s prime addresses in the business district of Victoria Island, to filming at Africa’s biggest slum where more that 85,000 people reside in a stilted water-based communality often called the ‘Venice of Africa,’ and also deemed one of the most dangerous areas in Lagos, the community leant their full support to the film.

3. Brave stunts: The cast of Blood Sisters were brave. Sarah and Kemi played by Ini-Dima Okojie and Nancy Isime did all their own driving and their own stunts with the help of an experienced coordinator. Ramsey Noah (Uncle B ) and Deyemi Okanlawon (Kola ) also participated in their own stuntwork, although all the actors had stunt doubles to support them.

4. Acting dogs and set effects: The dogs featured in Blood Sisters were specially trained to sniff out a prosthetic ‘dead body’ by Hausa trainers who would usually train dogs for cattle herding and security. It’s not often that dogs get to act in movies in Nigeria. All the injury and set effects were done for camera and there were no VFX used in post-production. The set FX were done by the self-trained Hakeem Effect and FX make-up was provided by Carina Ojoko.

5. Background actors: Nigeria is known for its vibrant film industry, which is said to be the third biggest in the world. So when growing up in Nigeria, being an actor is the dream of many – and Lagos is seen as a city where dreams can come true. With Lagos being one of Africa’s most populous cities and Nigeria one of Africa’s fastest growing populations, with over 200 million people, it goes without saying that people and crowds are everywhere. Blood Sisters had the support of nearly 1,500 background actors, many of whom hold regular jobs too.