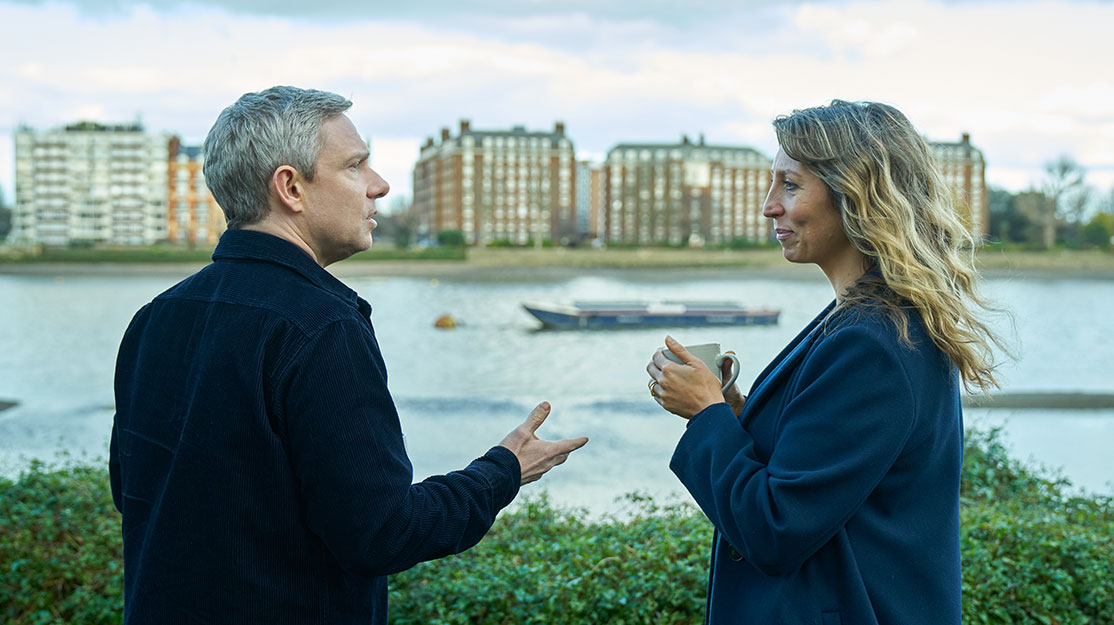 As Breeders returns for a third season, co-creator and showrunner Simon Blackwell reveals six things we need to know about this parenting comedy, which stars Martin Freeman and Daisy Haggard and is produced by Avalon and FX Productions for Sky and FX Networks.

1. Breeders is a show about parenting, based on the idea that while you love your children to the ends of the earth, you sometimes also quite want to kill them. We’ve just completed the third season of 10 episodes, which launch on Sky Comedy and streamer NOW today. Martin Freeman and Daisy Haggard play Paul and Ally, the parents of Luke and Ava. It’s a relationship comedy, but about the relationship between parents and kids, and deals with some heavy emotional subjects. But we try to create a tone and an editing style that allows us comedy, even when the characters are in their darkest moments.

2. Paul had always thought of himself as a nice guy, up until he had kids. But they’ve released a rage in him that he never knew existed, this Mr Hyde that has been exposed by these two people he loves more than anything in the world. Ally was ambiguous about having kids. She was successful, she was fulfilled. Paul was the driving force behind wanting children. Ally slightly resents having to be ‘nice cop’ most of the time because Paul always takes the ‘nasty cop’ role. But on the rare occasion she does become nasty cop, she’s a very terrifying and deranged cop. She’s the sort of nasty cop who would get dishonourably discharged from the force and become a nasty security guard.

3. For a writer, there’s a lot of dramatic and comedic juice in the subject of parenting. It’s a universal, primal thing – even if we’re not parents ourselves, most of us share the experience of having been parented. And you will always fail as a parent, to some extent, because you’re human and you’re flawed.
The same way a political career always ends in failure, so does a parent’s. It’s rare to be a parent of a grown-up child and to think, ‘Yep, I aced that.’ And it’s equally rare to be an adult thinking back to your childhood and believing your parents never made a mistake. So that’s part of what we’re trying to do with the show, to welcome people into this worldwide family of failures, and maybe ease the guilt we all feel at having screwed up.

4. I got used to 10-episode story arcs doing Veep for HBO, but it’s still not the most familiar shape for British narrative writers. We think in sixes, and that’s how we’ve learned to structure our overall series stories. There’s a danger with 10 episodes that you can find yourself treading water around episode six or so – your early plots are burning out but you’ve yet to light the touchpaper on the final denouement episodes, when you ramp up for your season finale.
As long as you keep this in mind, you can find your stories for this point in the season, and they’re often some of the most powerful episodes, but it’s something that needs to be in your head from the moment you open the writers room.

5. Jim and Jackie, played by Alun Armstrong and Joanna Bacon, are Paul’s parents in the show. I love writing for them because they’re basically my late mum and dad. Every line is stuff they said or would have said in that moment, so it’s lovely to still be ‘talking’ to them as I write.
In the context of the show, Paul and Ally are slightly older parents, so their relationships with their own parents are more complicated. I became a dad when I was still in my 20s, and at that age grandparents are a resource you can use – childcare, a bit of respite from the madness. If you’re having kids later then grandparents can be another thing you have to worry about, another responsibility – whether that’s health-wise or financially. That means even less time for you, less time to devote to your partner and your relationship. You’re parenting up and you’re parenting down.

6. Our plan for season three was always to jump forward a few years in time, like we did between seasons one and two. But a couple of things changed our minds. First, we ended season two on a big cliffhanger and we felt we owed it to the audience to play out the aftermath of that in our A-timeline, rather than in flashback, to see how the ripples from that big event affected all of our core characters. (This made it a different writing experience for the first half of the season, as we were writing away from an explosive event, rather than towards one.)
The second reason we didn’t jump forward in time was because we realised, as season two went on, how great our Luke and Ava actors were (Alex Eastwood and Eve Prenelle). We just wanted to see more of them, and they’re even better in season three. In fact, the whole cast is a joy and a privilege to write for; everyone is at the very top of their game.