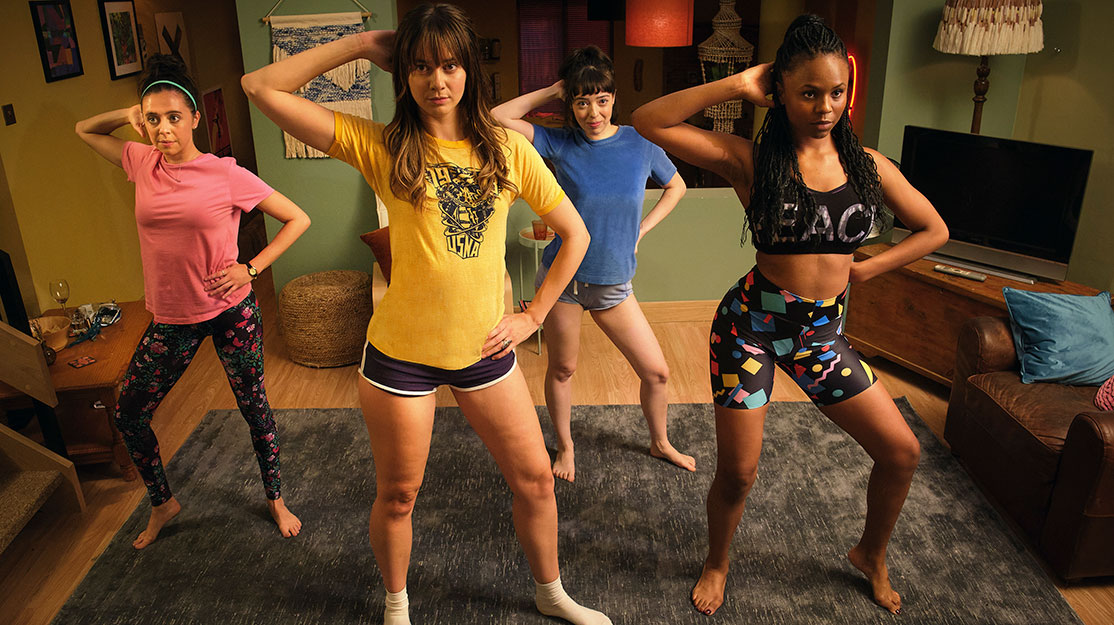 Everything I Know About Starstruck

Rose Matafeo, the creator and star of Starstruck, and Dolly Alderton, the writer behind Everything I Know About Love, share stories, revelations and advice from their experience making their shows.

One is a stand-up comedian from New Zealand who created, writes and stars in her own comedy series, Starstruck. The other is a British journalist and author who adapted her own bestselling memoir, Everything I Know About Love, into a seven-part drama.

Yet sharing the stage at the Edinburgh TV Festival, Rose Matafeo and Dolly Alderton found lots in common as they discussed their individual journeys into the television industry.

Starstruck stars Matafeo as Jessie, whose complicated life is muddied further after discovering her drunken hook-up is A-list film star Tom (Nikesh Patel). The series debuted on BBC Three in the UK and US streamer HBO Max in 2021, before it returned for a second run earlier this year. A third season is heading into production.

Meanwhile, Everything I Know About Love (pictured above) introduces four friends living together for the first time in London in 2012 and follows them as they navigate bad dates, heartaches and humiliations, coupled with the joys of living and loving life in your 20s. The BBC One show also launched earlier this year.

On stage in Edinburgh, the writers shared stories of how their respective shows were developed, moving from different backgrounds into screenwriting and what they have both learned about making television.

In 2018, Matafeo was working on a pilot script for Starstruck commissioned by BBC Comedy – the last pitch idea she had on a long list.
Matafeo: When you’re coming from a stand-up background, you’re constantly trying to find ideas for television that work with the persona you already work with on stage and in comedy. I pitched a ton of ideas that just weren’t really me, and then I finally remembered that I really love rom-coms and pitched that. That was very authentic to what I wanted to write and what potentially I would be good at writing because I had such a love for that genre.

Alderton had been in “development hell,” working on several different ideas, when a producer picked up rights to her memoir – which she had yet to finish.
Alderton: It was the dreaded one-pager that goes back and forth, the treatment you don’t know if you’re being paid for and the ‘let’s come in for a general.’ I like to call those ‘nonversations.’ I’ve been doing a lot of that. I had lots of near-starts and I was very aware, in this gold rush of TV, that you need a high concept. You can’t just pitch, ‘It’s a fun bunch of gals hanging out.’

I’d written half of my book and it had gone out to submission to publishers. I was 28, and somehow a scout got hold of it for [UK production company] Working Title. I went in for a meeting and the book was optioned for TV before I finished it, which was wild. I had to forget that, because I didn’t want to start writing it cinematically.

I was always aware that, because the book had done well, that was potentially enough of a reason for it to be adapted. But I don’t think that’s a good enough reason, so we had to think of what the concept was. We can’t just rely on ‘people like the book.’ Our concept was that it’s friendship told as a romantic comedy.

We worked with the BBC for a year and they brought in lots of brilliant ideas. They were the first to suggest flashbacks, which is really important in this story because, as we know through When Harry Met Sally, if you want to show the depth of a relationship, you have to span many years in a short period of time. The BBC gave these ideas that suddenly [gave the show] a huge new lease of life.

Matafeo went from writing stand-up routines to penning Starstruck, achieving her ambition of becoming a screenwriter.
Matafeo: I’ve always had an interest in writing scripts and screenwriting and wanting to make television and film before I did comedy, so it wasn’t too much of a stretch. But comedy is such a different form of writing. With an hourlong [stage] show, I don’t write out a script word for word. You write a set list and sometimes you’re less precise. I’m very precise with scriptwriting for Starstruck.

Working with people I really trust has been an interesting thing to open it up. With stand-up, it’s just something you do by yourself, but I wrote starstruck with Alice Snedden. Both of the other writers, Alice and Nic Sampson [who joined for season two], come from stand-up backgrounds as well. I don’t trust anyone, so to be able to trust two other people and have a really tight relationship with the two other writers was very important.

Alderton wrote Everything I Know About Love herself, save for one episode she co-wrote with Cherish Shirley, who then became a story consultant on the series.
Alderton: It’s only since I have gone into working in TV that I’ve realised how lonely and on your own you are as an author. You are the one who has to sell it; they edit you at the end and in the middle, but there’s huge pressure on a person when they put a book out into the world. I worried about the collaborative thing because I am a control freak – I don’t like anyone’s ideas other than mine! But I too found it an enormous relief to share the burden with someone.

Early on in development, Alderton knew Everything I Know About Love would be semi-fictional, with things needing to change from the book.
Alderton: I hadn’t realised how much making something was an act of bereavement and heartbreak every day when you go from script to screen. I’ve got a folder on my desktop called ‘things I was made to delete in the show.’ I would imagine a party scene in my head and then you get there [on set] on the day and I’d be like, ‘Where are all the people?’ I didn’t understand because I was so new to production and they’d be like, ‘This is top budget. There are 15 people at this party and it’s going to be a great party.’ Stuff like that – extras, music budget, locations, comedy gags and flights of fancy that take a huge amount of setup – all that stuff was the enormous heartbreak for me.

Matafeo’s early career working in TV in New Zealand gave her an understanding of production that helped her as a writer on Starstruck.
Matafeo: I found that such a helpful leg-up in terms of understanding a production process as a writer and writing a script while in the back of my mind, the producer element of me is going, ‘I know that’s not going to look great, we’re not going to have the budget to do that.’

It’s a terrible thing for a writer not to dream big, but it’s about dreaming realistically and writing a script and going, ‘What’s the best way I can get across the crux of what the scene should be in a way that will work with our budget?’ Sometimes on Starstruck it was a healthy thing, because it can be brutal.

While making any television show is challenging, Matafeo found Starstruck especially demanding because of the extent of her involvement on and off camera.
Matafeo: Being in it, writing it, there’s no part of the process where I’m not involved, which is what I love. Sometimes it’s hard to compartmentalise your judgement. It’s never a fun thing to sit in an edit and look at your own face. It’s a horrible thing. In the edit, I have to refer to me as ‘her.’ In the same way, sometimes I’ll write something – like in season two, we wrote the whole ending in a lake – and I’m like, ‘Does she have to get into the lake?’ because I knew that would be a miserable two days for me [during filming].

It was a challenge to separate those roles [of being a writer, actor and producer]. But that’s a challenge I relish because I love being involved in everything. Now I’m moving into directing for the third season. I’m terrified but it’s very exciting.

Alderton, who faced the challenge of creating a group dynamic between four female characters, enjoys writing women talking to women.
Alderton: I don’t mind that I don’t really have a male audience. It’s nice when they come but I like the idea of women talking to women. The semiotics of a night out and living together were so important to me, and China [Moo-Young], our director, got it so much. She was really the storyteller for that side of things and knew that if there was a radiator, there should never not be a pair of knickers on it. We wanted to capture that feeling of women when they first move to a city together, the enmeshment of that, how disgusting girls can be together, how silly, claustrophobic, childlike, cosy and romantic.

Because I come from a reality TV background, the hangover I have from that is the way we established atmosphere in Made in Chelsea with montages. I would write these montages and China would say, ‘We’re not in reality land, they are too time-consuming, it’s too many setups.’ She had this idea that I was nervous about – a one-camera setup and then showing the best part of the night, getting ready, and the girls coming in and out and us watching them build their adulthood together. The girls loved it because the four of them [Emma Appleton, Bel Powly, Marli Siu and Aliyah Odoffin] are serious actors. They liked the challenge of putting a song on and doing their own thing for an hour. We did take after take and they were buzzing at the end of it.

Ahead of filming season three, Matafeo says Starstruck has given her the confidence to find out what she enjoys doing.
Matafeo: You spend a lot of your 20s going, ‘What am I going to do with my life?’ I was already doing stand-up at the time but it did give me the confidence to go, ‘I want to write for TV, write for film and direct.’ It taught me I really love lighting! I’m always interested in what the gaffer is doing on set.

I’ve learned a lot about collaboration as well, and as much as you come from a background of working alone, the benefit of making a television show is working with people who are the best in their fields and being able to work as a team. The massive thing I’ve learned is there’s no point going, ‘I have this one vision and everyone has to listen to me.’ It’s always about negotiating, it’s working as a team – and not throwing too many strops.

tagged in: BBC, Dolly Alderton, Everything I Know About Love, Rose Matafeo, Starstruck