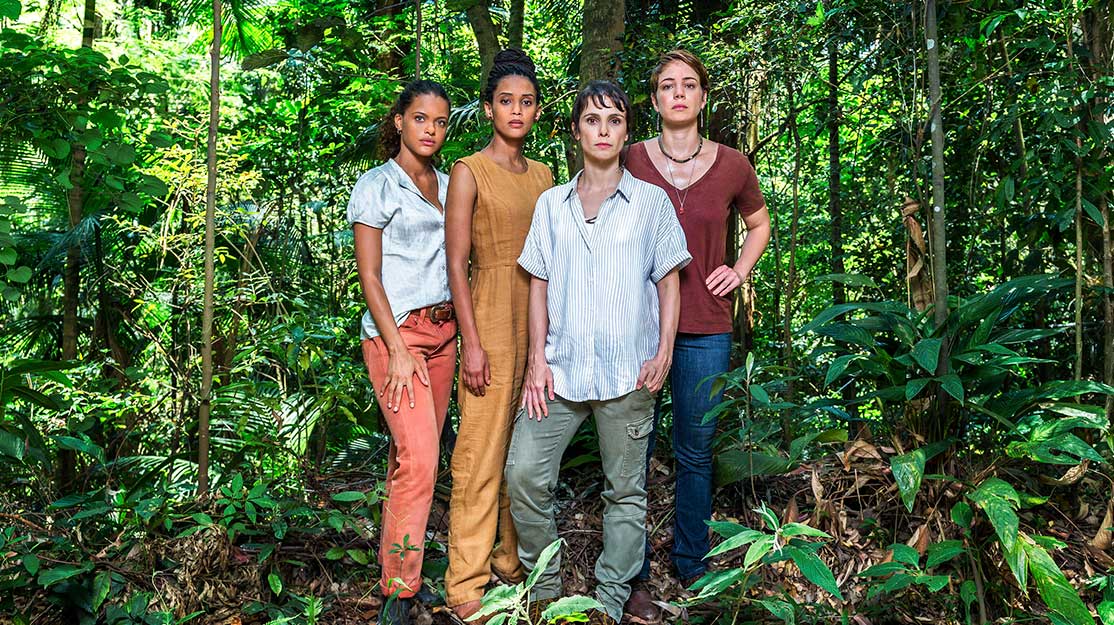 Greenpeace, WWF and the UN are among the supporters of Brazilian drama Aruanas, which charts the work of environmental activists who investigate the suspicious activities of a mining company in the Amazon rainforest. DQ meets creator, writer and director Estela Renner.

When Brazilian drama Aruanas launches worldwide today, it won’t be found on any of the major global streaming giants. Instead, it will be available on a standalone platform for anyone around the globe to download – because the subject matter demands this story not be restricted to viewers with the right kind of subscription. It’s too important.

That’s certainly the view of the makers and producers of the 10-part Portuguese-language thriller, which is backed by more than 20 international and national non-governmental organisations (NGOs), including WWF Brazil, Amnesty International, Global Witness, UN Environment, UN Women, Oxfam Brazil and the Rainforest Foundation. Greenpeace is a technical collaborator on the show.

Aruanas comes from a partnership between prodco Maria Farinha Films and Brazil’s Globo TV, which have created the fictional story about three idealistic women who set up an NGO to investigate the suspicious activities of a mining company operating in the Amazon.

Bypassing traditional broadcast partners by making the series available at aruanas.tv – in more than 150 countries and 11 different languages – also means 50% of the download fee will go to initiatives designed to protect the Amazon rainforest. In Brazil, Globo will air the first episode on its domestic and international channels, which reach more than 100 million people, with the series then being made available on SVoD service Globoplay.

Sustainability is not just a theme of the series but was also at the heart of the production. Marina Farinha Films reduced the size of the crew and equipment, reused and recycled costumes and hired climate change specialist ZCO2 to ensure the production was carbon-neutral. Of the crew and leading actors, 47% were women, while a third of the cast were from the region of the Amazon where the series was filmed.

For the last 10 years, Maria Farinha Films has been built on producing documentaries and TV series focusing on social and environmental issues, tackling subjects including childhood obesity, refugees and LGBT rights. Climate change has been a cause long on its agenda but, as the company’s founder Estela Renner explains, the subject needed to be treated in a different way, which led the company to jump into fiction for the first time.

“We wanted to do something long term, something that could stay for seasons,” she tells DQ following the London premiere of Aruanas. “There are so many seasons of Grey’s Anatomy and ER and you learn so much about hospitals and the dynamics that are involved. How about making a TV series that takes place in an environmental NGO? What better way to talk about the drama and activists and all issues there are to address – the oceans, oil, soil, air. That’s why we decided to jump into fiction.”

Renner wrote the series with her business partner Marcos Nisti, in collaboration with Pedro de Barros, and developed it alongside Globo. The story introduces Aruana, an NGO that receives an anonymous complaint about a mining company working deep in the Amazon rainforest. When the NGO’s contact is killed and the incriminating dossier is destroyed, its staff become determined to uncover what is going on.

“Mining is a huge environmental issue,” Renner says of the story’s key focus. “We also talk about illegal gold mining, which puts so much mercury into the rivers and everything becomes sick – the rivers, the soil and the people.”

After getting the green light in 2017, there was a year-long writing process that also included support from “script doctor” Lawrence Konner (The Sopranos). The writers began by outlining the key characters and their relationships in the story. Luiza (Leandra Leal, Empire) has difficulty balancing her work as an activist – often undercover miles from home – with motherhood. Verônica (Taís Araújo, Shades of Sin) is a lawyer, while Natalie (Débora Falabella, Brazil Avenue) is a journalist. The group is completed by Clara (Thainá Duarte, If I Close My Eyes Now), an intern who faces up to the flaws and challenges of an NGO as the audience follows and learns through her experiences.

“We made a huge map with the relationships and what’s going to happen to them,” Renner explains. “Their challenges, their fears, their secrets; what they want and what they fear. On top of that, we do the procedural, the investigation itself – the cliffhangers, the ticking clock, the villains, the tensions and the obstacles.

“The first thing is the relationships, then the procedural on top. It’s like a puzzle. We have all the pieces and then we have to make them a perfect picture.”

That’s not to say the series is a lecture about climate change, nor does it present an unwaveringly positive representation of an NGO or condemn mining outright. “It’s not propaganda. You can see the activists doing stuff you wouldn’t recommend doing,” Renner says. “We found a way to build the layers of the series so we can see why mining can be important, because it develops a country, it creates jobs and it brings development sometimes.

“Even when Natalie interviews our villain, they have a battle where, for a while, you don’t know which side to take because both sides are right. But at the end of the season, we see this type of mining is wrong. You cannot mine and pollute the rivers, the soil, the air and people. You have to do it the right way.”

Renner also states that her NGO partners, which contributed no money to the production, were clear this would be a non-factual drama from the outset: “They were with us from the beginning but they also understood this is fiction. You have to put some salt and pepper in to make it interesting and edgy. All the organisations understood that and were happy. Because it’s  fiction, they knew they didn’t have to correct us. It’s important it’s fiction; it’s not a documentary.”

Filming took place across four months, with the cast and 190-strong crew travelling back and forth between the south-west city of São Paulo and the Amazon, where filming took place in Manacapuru, in the northern state of Amazonas in the centre of the rainforest.

Renner shared directing duties with Carlos Manga Jr, with the visual style of Aruanas inspired by films such as Babel and Beasts of No Nation. One rule was that the camera should never impose itself on the story or the characters.

“Everything we did in the Amazon was handheld and everything in São Paulo was on a tripod or dolly, while we only shot in locations. We didn’t shoot in a studio at all,” Renner reveals. “We had a code so in São Paulo; there was a colour, a language and a style. In the Amazon, things get a little crazy – the explosion of colours and handheld and lots of steadicam.”

More than 200 extras were brought in from Manacapuru and the surrounding area, while Renner also enjoyed some rehearsal time with the leads. However, the falling river levels when filming began last August meant there was a race to complete all the rainforest sequences as quickly as possible.

“We had 10 episodes and filmed them as a big movie,” Renner recalls. “We shot by location, so each day we were filming scenes from different episodes. The river level was going to go down, so we had to start with everything in the rainforest, which ended up being great because then the crew were able to bond together without cell phones, as they didn’t have any signal!”

The decision to set the drama within an NGO and the world of its activists doubles as a mechanism for the organisation, in future seasons, to explore other aspects of climate change, looking at the oil industry and the oceans. Work is already progressing on a second season, which will explore a different type of environmental crime.

But Renner says that despite Aruanas’ representation of the work of NGOs and their fight for a more equitable and sustainable world, her main priority is to entertain viewers with this high-stakes thriller.

“Chernobyl would be the perfect example because it’s super well done, super entertaining and when you finish watching it, it makes you think this power of destruction we have now is bad,” she says, referring to HBO and Sky Atlantic’s recent miniseries about the 1980s nuclear disaster.

“Maybe people can connect with NGOs and see what they’re doing. We didn’t want this to be too on the nose. We want to stay for several seasons through the characters and their lives, and it does have a happy ending. There are so many series with a dystopian future; dreaming collectively of a good future is important because it has power.”