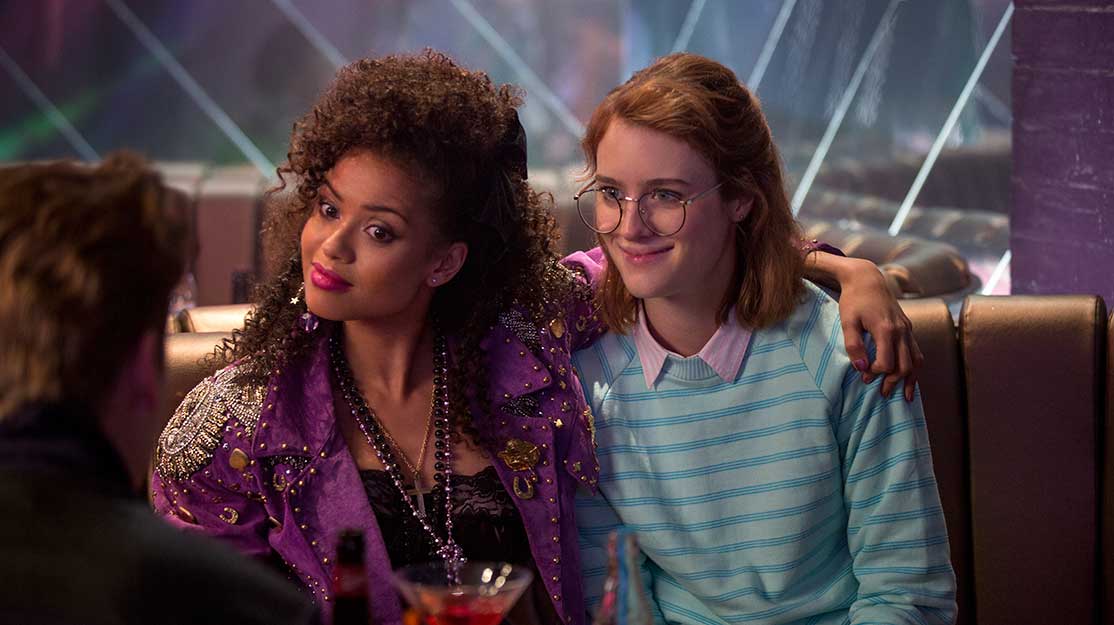 Ahead of the Bafta Television Craft Awards, costume designer Susie Coulthard takes DQ through her work on the standout episode from the third season of Black Mirror, San Junipero, for which she has been nominated.

When the third season of Black Mirror dropped on Netflix, there was one episode that stood out, not just among this line-up of six new stories but across the entire run of the anthology series.

Set largely in the 1980s but ultimately across multiple eras, San Junipero turned the show’s typically twisted take on the impact of future technology into a nostalgic romance that unfolds in the fictitious fun-loving beach town that gives the episode its title.

It stars Mackenzie Davis as Yorkie, an awkward introvert whose life changes after meeting exuberant and outgoing Kelly (Gugu Mbatha-Raw).

Born from Black Mirror creator Charlie Brooker’s desire to create a “vintage” episode of the series – one set in the past as opposed to its usual near-future or modern-day setting – the look and feel of the episode is completed by the retro soundtrack, the production design and the detailed costumes.

Enter costume designer Susie Coulthard, whose credits include Kill Your Friends, Alphas and The Gamechangers. Coulthard’s work on San Junipero has earned her a nomination at this Sunday’s Bafta 2017 Television Craft Awards, where she will be up against Charlotte Holditch (The Durrells), Michele Clapton (The Crown) and Nigel Egerton (The Hollow Crown: The War of the Roses – Richard III) in the costume design category.

Here Coulthard tells DQ about joining Black Mirror, which is produced by House of Tomorrow and distributed by Endemol Shine International, and how she helped to create the unique style of San Junipero.

How did you first become involved in Black Mirror?
I had a call from [producer] Laurie Borg, who I’d worked with on [Mathew Cullen-directed feature film] London Fields asking if I’d be interested in designing an episode for the new season of Black Mirror, and of course I jumped at the chance. There was no director in place at the time and then Owen Harris was hired, whom I’d just shot Kill Your Friends with, which sealed the deal.

Were you a fan of the series and what were your first impressions of this episode?
I was a big fan of the series. It’s a very different model to the usual TV series but great for a designer as each episode has a completely different concept and feel. When I first read the episode I was blown away. And that doesn’t happen very often.

Once you join a project, where do you begin?
I like to read the script numerous times over the first couple of days so I have an idea of characters set in my head before I start the research. I’ll then research and produce ‘mood boards’ prior to a chat with the director so that we have visuals to refer to. I always check to see if they have any filmic references. We used John Hughes films [The Breakfast Club, Ferris Bueller’s Day Off] as the main reference for San Junipero. Everyone remembers those films from the 1980s and they are sort of ingrained in our memories. We wanted to create nostalgia. Then I immerse myself in more specific research before I start designing.

What unique challenges did San Junipero present you with?
When I first read the script I thought, ‘Christ how are we going to do this?’ There’s a lot of jumping around different eras. The 1980s and 1990s were fine, as we all know what that looked like. However, 2002 was quite difficult. It doesn’t feel that long ago but actually the period has a definitive style and once I actually researched it, I realised how period it feels and how much we’ve moved on from the early naughties.

How do you use the script to inform your decisions?
A well-written script will give you everything you need. If I’m uncertain of a costume choice, I’ll read the script or scenes again. It’s amazing what clarity this gives you – it does tend to be on the page.

How do you work with the writer and director to find the right styles for the characters?
It’s a very collaborative process. Owen is a fantastic director to work with; he’s very sure of what he wants but is open to let me interpret his thoughts. Charlie [Brooker, series creator and San Junipero writer] is also very strong in what he thinks. After all, the characters were born in his head so he is the one who really knows who they are. I originally had a much softer look in mind for Kelly but Charlie was like, ‘No! Think Janet Jackson!’ It can just take one reference and everything falls into place with the look.

What is the biggest challenge for a costume designer on a TV show?
Late casting always poses great problems for the costume department. You can be really sure of a direction and then it can change dramatically when you speak to the cast. Their opinions are so valid for me, as we are there to service their needs as much as the director’s. And to help them find the character, they have to be part of the collaborative process. Time is also necessary post-fitting to refine the look, and sometimes this can be a bit of a scramble when time is short.

How does your role differ between film and television, if at all?
A normal episodic TV show can turn into a bit of a machine. You have very tight deadlines and masses of rounds of approvals, which can see all of your time taken up on emails, reducing your creative thinking time and often turning into design by committee. In film it’s much freer, a much more organic process, a more creative process. Black Mirror is more like film than TV, which is what makes it so attractive to creatives.

Was there a particular part of this episode you were most pleased with?
I really like the wedding dress scene. I knew some of this was going to be shot at dusk so I wanted a fabric that would shoot well in dim lighting. Wedding dresses from the 80s are the ultimate in hideous but there are certain aspects of them that are so fun and evocative of the time –  the ruffles and leg-of-mutton sleeves. The idea that they would go into the San Junipero programme to pick their wedding outfit gave us the opportunity to use the same fabric but differing styles, which Kelly and Yorkie would have picked, and I think it worked really nicely. Clinton Lotter, the fabulous bridal designer, made the bespoke dresses for the girls.

What are you working on next?
I’m currently back at Black Mirror working on a new episode for the upcoming season. Then I’d like to do a feature next.