Drama in demand at Mipcom

A devastating flood at the start of this year’s Mipcom didn’t seem to affect the amount of business being done throughout the week, with the trade in scripted shows especially brisk.

One title that managed to rack up a number of sales was FremantleMedia International’s German-language spy thriller Deutschland 83, which was sold to Channel One (Russia), Sky Italia, Hulu (US), SundanceTV (English-speaking Canada) and Stan (Australia and New Zealand), among others. This follows on from previous deals with broadcasters including SundanceTV in the US, Canal+ (France) and Channel 4/Walter Presents (UK).

A coming-of-age story set in Germany during the Cold War, Deutschland 83 follows Martin Rauch, a 24-year-old East German native who is sent to West Germany as an undercover spy for the Stasi foreign service. The show is part of a broad trend in the TV business towards espionage-based thrillers – the trigger for which was probably the Israeli scripted format Hatufim (Prisoners of War), which was reinvented as Homeland in the US.

Other espionage-based shows selling well this week included Zodiak Rights’ Occupied, a Nordic series that imagines a situation in which Russia invades Norway to take control of the country’s oil industry. The show, which has debuted strongly in Norway, was picked up for broadcast in Poland (a country that also has an acute interest in Russian foreign policy).

Similarly, there was a lot of interest in Keshet International’s False Flag, which was featured in The Wit’s popular conference session Fresh TV Fiction. This Israeli series centres on five seemingly ordinary Israeli citizens who are accused of kidnapping a senior Iranian politician. It has been picked up by Fox International Channels – which is planning an English-language version via Fox International Studios and has also acquired the rights to the Hebrew version. The latter, which will air in 127 territories via FIC’s channels, is the broadcaster’s first non-English-language series acquired on a global basis. 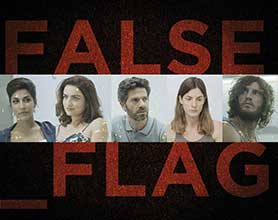 There has always been a strong trade in non-English-language drama between countries where English is not the first language. But a big change in the business over the past few years has been the willingness of English-language broadcasters and platforms to air such shows. Netflix, Hulu and BBC4 in the UK can take a lot of credit for kickstarting this trend, but it has become a lot more widespread in the past six to 12 months.

One interesting development in this regard is Walter Presents, a foreign-language drama on-demand platform that is being launched in January by Channel 4 in the UK and its strategic partner GSN. Walter Presents was busy at Mipcom snapping up the rights to a wide range of non-English dramas. It struck a deal with German distributor ZDF Enterprises for a number of series, including 10-part Belgian black comedy drama Clan, which follows the exploits of four frustrated sisters as they plot to kill their obnoxious brother-in-law, and 10-part Swedish political thriller Blue Eyes. Also acquired from ZDF were eight-part crime drama The Team, six-part Polish crime thriller The Pack and Swedish family saga Thicker than Water.

Rai Com, the commercial arm of Italian public broadcaster Rai, has been another beneficiary of this interest in non-English drama. At Mipcom it secured deals for the new season of its detective series The Young Montalbano, licensing it to the BBC, RLJ (UK video rights) and Hi Gloss (Australia and New Zealand video).

There have been numerous examples of US cable channels commissioning new scripted content recently. But making drama is expensive, so some channels have sensibly decided to explore the international acquisitions route as well. An example we cited a couple of columns ago is Esquire Network, which has picked up Spotless and Beowulf: Return to the Shieldlands. A&E Network did something similar at Mipcom, picking up The Frankenstein Chronicles, produced by Rainmark Films, distributed by Endemol Shine International and starring Sean Bean (Game of Thrones).

SundanceTV is following a similar trajectory, though it prefers to get involved as a coproduction partner, giving it a little more oversight and input into the end product. Having previously partnered up on The Honourable Woman and D83, for example, it was busy at Mipcom picking up a new portfolio of non-US dramas.

One interesting title that it has jumped on board is RTÉ’s historical drama Rebellion, which tells the story of the birth of modern Ireland. It has also linked up with Sky Atlantic and Canal+ on The Last Panthers. Produced by France’s Haut et Court and the UK’s Warp Films, the series centres on the evolution of criminality in Europe, taking place in locations across the continent, from Serbia to Marseilles in France.

More evidence of the vibrancy of the European drama scene right now is the news that Zodiak Rights-supported Versailles has been given a second season, while TF1 in France and RTL in Germany are backing the new UFA Fiction/Beta Film drama series Hitler (working title). Meanwhile, The Copenhagen Film Fund has confirmed it is in talks about financing a fourth season of SVT and DR’s hit crime drama The Bridge.

In terms of US series, the major TV studios were quick to seal deals. Disney Media Distribution licensed ABC Studios’ The Muppets to 122 territories, while the latest Shondaland drama series, The Catch, has been licensed to 186 territories. Executive produced by Shonda Rhimes and Betsy Beers, The Catch is a thriller about a successful fraud investigator who becomes the victim of fraud by her fiancé.

Sony Pictures Television also announced international deals for its shows. Wesley Snipes drama The Player hasn’t started very strongly in the US, but SPT has still managed to sell it into 105 territories, with high-profile deals in France (TF1), Germany (RTL), Spain (AXN) and Australia (Seven). SPT has also had a good start with The Art of More, a Dennis Quaid drama that was created for on-demand service Crackle. To date, the show has been sold into 25 territories via broadcasters such as Viacom’s Colors Infinity channel in India, OSN across the Middle East and D-Smart in Turkey. Of the two dramas, The Art of More feels more like a show that may run for a few seasons.

Other US shows to do business this week include NBC’s strong starter Blindspot, which was licensed to Sky Living (alongside Limitless and The Catch). Meanwhile, NBCUniversal thriller Mr Robot was picked up by Finland’s public broadcaster YLE.

While the majority of news from Mipcom 2015 concerned the sale of completed shows, there was also a smattering of commissioning and format announcements at the market. Viacom-owned BET, for example, is reported to be planning a six-part drama miniseries called Madiba, focusing on the life of Nelson Mandela and starring Laurence Fishburne; while StudioCanal-owned Tandem Productions is to adapt Code to Zero, the international bestselling novel by Ken Follett (Tandem previously adapted Follett’s Pillars of the Earth epic). Note also the above references to Versailles, Hitler and The Bridge.

On the format front, German network Vox is remaking Spanish drama The Red Band, TF1 in France is to produce a local adaptation of BBC drama The Escape Artist and CTC in Russia is adapting Keshet International’s romantic comedy The Baker and the Beauty.

Perhaps the most exciting format news of the week, however, is that US broadcast network ABC is adapting Janus, a drama from Austrian pubcaster ORF. This deal demonstrates that the powerful US networks are continuing to cast their net far and wide in search of great scripted ideas.