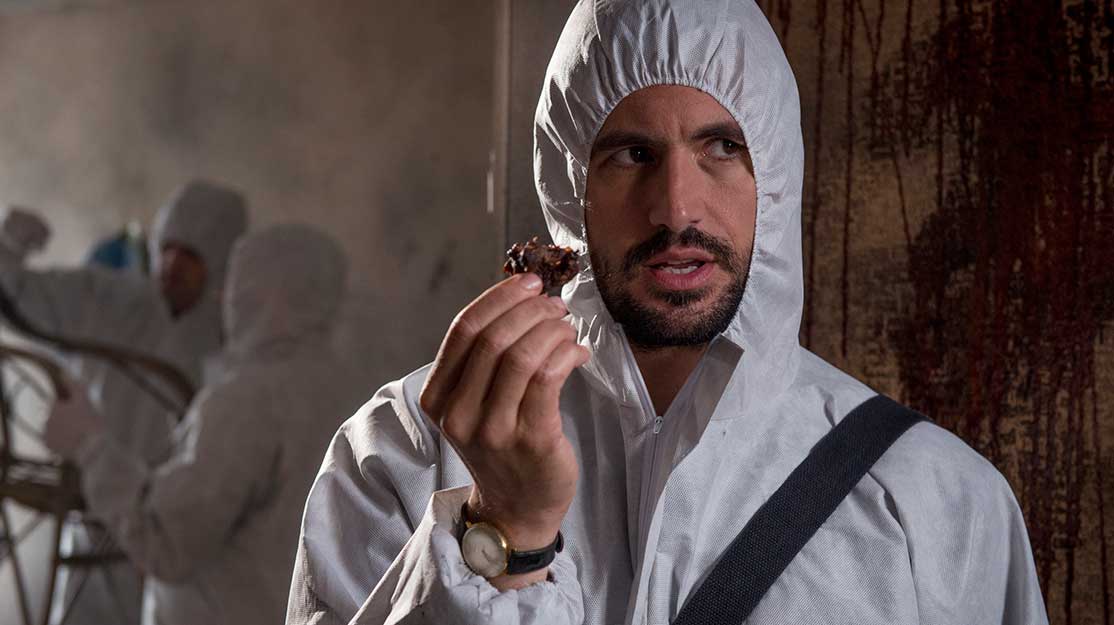 Drama down to a science

Described as a mix of Sherlock, Breaking Bad and The Big Bang Theory, German mystery crime drama Einstein is preparing to hit screens this spring. DQ speaks to the producers behind the show.

Albert Einstein’s great-grandson is the sleuth at the heart of Einstein, a crime drama produced by Zeitsprung Pictures for German broadcaster Sat.1.

Written by Matthias Dinter and Martin Ritzenhoff, the story follows Felix, a university professor accused of the theft and abuse of illicit stimulants – until the police offer him an extraordinary deal: if he agrees to help them solve crimes, he won’t have to serve a prison sentence.

Launched as a TV movie in 2015, which served as a backdoor pilot to a six-part series this spring, Einstein stars Tom Beck, Annika Ernst, Rolf Kanies, Laura Berlin, Burak Digit and Pierre Shrady. The director is Thomas Jahn and the distributor is Red Arrow International.

DQ speaks to the producers behind the series to find its inspiration and learn how it marks the next step in the evolution of German crime drama.

What was the inspiration for the story and making the central character Albert Einstein’s great-grandson?
Michael Souvignier: We wanted to create a new crime series that felt fresh and young, with an innovative and strong main character. Albert Einstein was famed for his unconventional attitudes towards politics and social norms, and we started to ask ourselves how Einstein would have approached solving criminal cases using his scientific background.

Dominik Frankowski: Yes, and in order to set the story in contemporary Germany we created the fictional character of his illegitimate great-grandson, Felix Winterberg (Beck), a young physics professor who shares his great-grandfather’s genius and traits.

How is this a different take on the traditional crime genre? Is it a procedural or does it offer elements of serialised storytelling?
Frankowski: What makes Einstein different is the strength of the characters. Unlike most lead characters in crime series, Felix is neither a detective nor a lawyer, but rather an unofficial and involuntary part of Bochum’s crime team. His participation is involuntary because he is caught taking illegal drugs to keep himself awake while trying to finish his scientific research on dark matter. He is also dying of Huntington’s disease. When caught by detectives Elena Lange (Annika Ernst) and Stefan Tremmel (Rolf Kanies), he manages to avoid prison by agreeing to a deal – to use his genius to support the local police investigation department in solving their most curious crime cases. By operating both within and outside of the law, and being quirky, impetuous and hilariously politically incorrect, his character has a sense of freedom and openness that keeps the storylines dynamic and engaging. Above all, he has a strong desire to defy legal restrictions and regulations – in both his investigations and his private life.

Souvignier: The series also stands out from traditional German crime shows because it is fast-paced and set in some great locations. We only shoot with a moving camera and we use fast cuts to keep the momentum. Einstein actually has more cuts than Germany’s most successful action show. In terms of storyline, Einstein is a procedural but it also uses elements of serialised storytelling. Each episode is self-contained, centring on a case being solved by the same set of characters – Felix Winterberg and detectives Elena Lange, Stefan Tremmel and Kirsten Maybach (Haley Louise Jones). But there are also strong season story arcs, including Felix’s attempt to save his scientific findings from an unknown force. This horizontal narrative was established in the movie pilot, when Felix was robbed of some of his most important research records – research that has the potential to solve the world’s energy crisis. Throughout the series he is driven to find this lost research, developing his character and relationship with the main cast as a result.

After the pilot, how did you approach making a six-part series?
Frankowski: The overwhelming success of the movie pilot on German TV led to an immediate series commission. It was important to us that we used the same creative team, bringing back our proven team of writers Matthias Dinter and Martin Ritzenhoff, director Thomas Jahn, as well as the main cast and a large number of the original crew.

Were there any creative challenges that you had to overcome – such as creating elaborate crimes – and if so, how?
Frankowski: “Keeping up with a genius in physics was definitely a challenge when developing the show’s crime cases.”

Souvignier: None of us have science backgrounds so it was important to bring in professionals – professors and PhD students – who supported us to make sure every case was realistic and grounded in science fact. When we see Felix processing the facts and making complex calculations to solve the case, we wanted it to be as close to reality as we could get. The crimes and how he solves them needed to be extraordinary and funny, featuring twists and light-bulb moments that keep the show both comprehensible and exciting.

How is the crime genre changing in Germany? What are audiences looking for and where do you think this series fits in?
Souvignier: Germans are a very crime-savvy audience. In fact, no other country watches more crime shows. Consequently, German TV has decades of well-established crime series to draw on, such as Tatort, Soko and Ein Fall für Zwei. Tatort in particular is still incredibly successful. But there is also an increasing appetite for new formats that shake up the genre, with Scandinavian crime series like Wallander and Der Mann und das Meer and action shows such as Alarm for Cobra 11 having a big impact.

Frankowski: The German TV market is pretty open to new and innovative crime formats, especially those that appeal to younger audiences. Einstein fits this perfectly.

What is the writing process for the series? Do you have one writer or are you using a writers room? How do you compare the two methods and are writers rooms becoming more or less common?
Souvignier: We develop the plots for the episodes and season-long story arcs in close collaboration with our two writers. The process of story development involves starting with putting rough outlines together in the form of an exposé and agreeing on basic plot ideas for each episode. The writers then put more flesh on the bones and develop the ideas into written treatments and finally into actual filming scripts.

Frankowski: Writers rooms are becoming more common in Germany for developing TV series, helping to be more time-efficient, which is helpful when you have to produce many episodes in a short time.

Are broadcasters in Germany looking for new types of series or are crime shows still the most popular? How is German drama changing?
Frankowski: The demand for crime shows appears bigger than ever, although series about contemporary family life are also gaining ground. Family shows were popular on German TV in the 1980s and early 1990s, and were usually pretty traditional in how they represented society and family life. A lot has changed in the past 20 to 30 years. Today, broadcasters and producers ask, what does a family show – and even an ordinary family – look like in 2016? How have families evolved and interactions between people changed? The impact of everything, from politics and the economy to migration and technology, is being looked at. How do these changes affect society and families? All these questions could provide an exciting background to tell a story of contemporary family life.