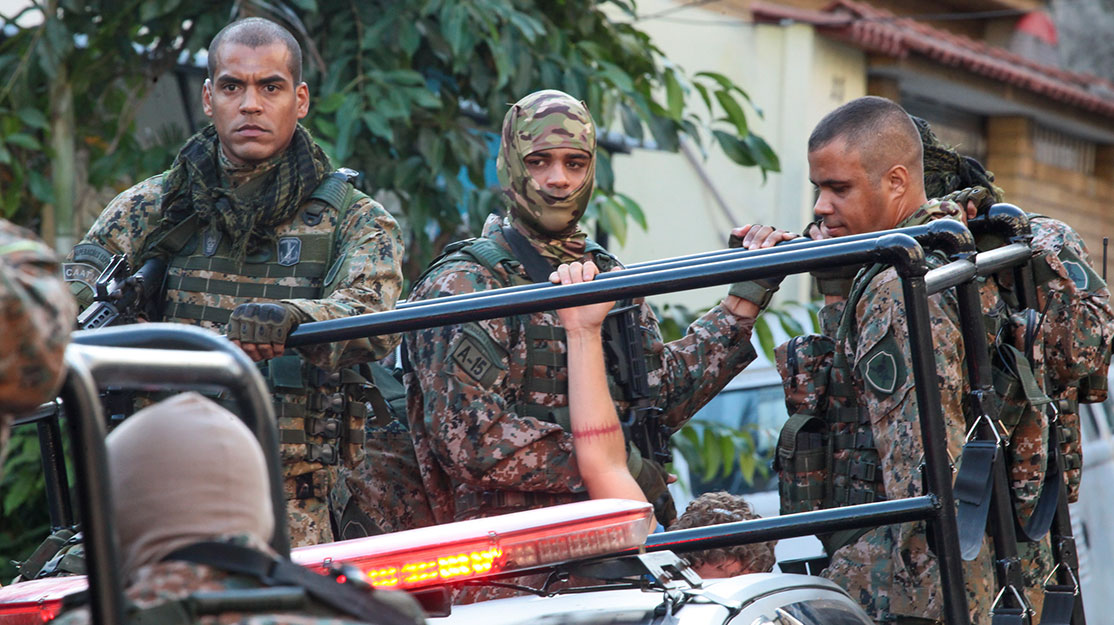 In the face of international competition from the likes of Netflix and HBO, Brazilian streamer Globoplay is ramping up its original content with a raft of homegrown series designed to keep viewers hooked on local stories.

In 10-part police thriller Arcanjo Renegado (Dissident Archangel, pictured above), a Special Operations Battalion sergeant sets out for revenge after one of his friends is tragically injured during a high-risk operation, leading him into conflict with some of the country’s most powerful politicians.

Similarly thrilling is five-part miniseries A Divisão (Anti-Kidnapping Unit). Set in 1990s Rio de Janeiro, the show is based on the true story of a group of police officers put together to fight a wave of kidnappings and save the city from criminals and corrupt police officers.

Produced and distributed by Globo, both series come from screenwriter José Junior, who tells DQ about his personal interest in the shows’ subject matter, his writing process and filming in Rio’s favelas.

What were the origins of these shows?
Anti-Kidnapping Unit was based on the story of three policemen who ended the wave of kidnapping in Rio in the late 1990s. One of them co-created the series and worked on it as a consultant and screenwriter. We talked a lot because he had to remove any ethical or moral concerns so we could access the true story, and he was profoundly professional. To create this type of narrative, you need to have confidence in whoever tells you the story.
In the case of Dissident Archangel, I had a remarkably close relationship for many years with Rio’s BOPE [Battalion of Special Operations] police. It also helped me to have their confidence to tell the stories that are part of the series. I gathered the stories they told me along with others I knew relating to politics and business.

Why did you become interested in writing about the police?
These are stories that are part of my experience. Twenty-seven years ago, I founded an NGO called AfroReggae, which works to take people out of drug trafficking, mediating conflicts and wars between factions, in addition to offering opportunities to young people from different favelas in Rio de Janeiro.

Who are the main characters?
The main characters are people who, in some way, are protagonists of the violent social chaos in Rio. In the city, there are several social protagonists – they include police, journalists, community and social leaders, and politicians. Our focus is to give prominence to these real characters, to make space for black actors and to show places in Rio that have never been shown.

How did the actors prepare?
Initially, the actors’ preparation took place remotely. I recommended several series for them to watch. Then there was another, more profound, step, especially for those playing politicians, police and others: the work with the consultants. When diving into these projects, the actors want to do their best for their characters. They feel comfortable with us because they know my story and [they learn from] the consultants.

How would you describe your writing process?
I am currently involved in six projects that speak to each other but are quite different. I always try to watch myself to make sure I don’t adopt similar characters, plots or locations. This is particularly important for me so I can work on themes linked to subjects such as politics, public security, favelas, racism, gender and diversity without repeating the same formula.

How have you worked with the directors to create the visual styles for both shows?
The best way for you to bring the real world to the screen is to show reality. Of course, there is a lot of work involved in art direction and scenography, but what impressed me the most visually was when there were no visual changes to the locations. They were already ready for us, and I, as a creator, know what I want.
I have a history of living in a deflagrated area, working with the police and also living in Rio de Janeiro itself – before founding the NGO, I was a taxi driver. During the pandemic, I went to several locations. I filmed and took pictures and sent them to the writers to indicate what I was talking about. I made a point of going to see them in real life; I do not believe in the creative process of just searching Google and using books. When you want to show more reality and you want people to feel this truth, you must go to the field.

Where were the series filmed and what locations were used?
Anti-Kidnapping Unit was filmed in Vila Vintém, a favela on the west side of Rio. The residents became our partners so we could use that location. We also recorded at Piscinão de Ramos and Complexo da Maré, another favela. We did scenes at the Guanabara Palace, the seat of political power in the state of Rio de Janeiro, and we used some other locations around the city.
For Dissident Archangel, we recorded at Complexo da Maré, Morro do Timbau, Baixa de Sapateiro and Piscinão de Ramos, among other locations in the city. With both series, the priority was to show a Rio that has not seen in other films or national or international series.

Why do you think both series can attract viewers in Brazil and around the world?
I think people are interested in understanding a little about social pragmatism, whether for good or for bad. There are already streaming platforms with series from various locations around the world, as there is global curiosity, especially when talking about Rio de Janeiro.
Rio has always aroused interest, and now we have the opportunity to go behind the scenes and show what happens there.

How has your work been affected by the pandemic?
If there were no pandemic, we would have already delivered a series called Betinho, about the greatest social activist in the history of Brazil. In addition, we would have the second season of Dissident Archangel ready. What we did was speed up the script process for other series we are working on. Altogether, there are six projects, all in partnership with Globoplay and Multishow.

How is Brazilian drama evolving locally and internationally?
Today there are projects from Brazil on global streaming platforms that have had an excellent response. At this moment, we have great possibilities to perform even better, both nationally and internationally, with Globoplay content. Through these products, we seek to show what happens in society.
Brazilian content has great potential to stand out. This was supposed to have happened previously, with the presence of great actors in works that have travelled abroad, like Fernanda Montenegro, who is an icon in Brazil. We have to take bigger steps and the path has to be through digital content platforms.