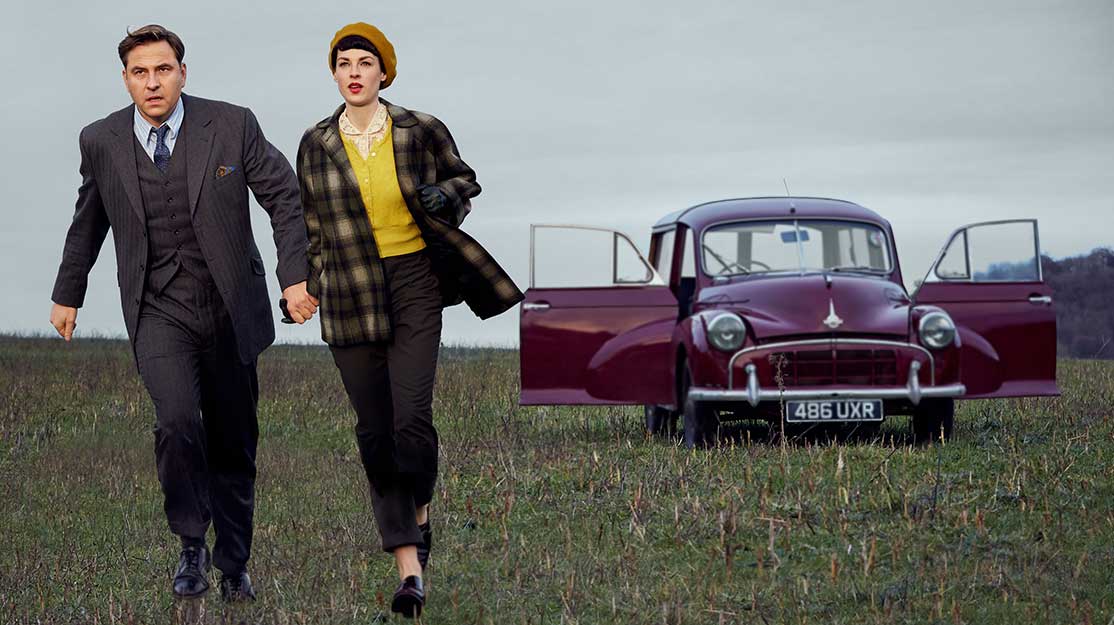 DQ takes a closer look at the forthcoming BBC1 show Partners in Crime, starring David Walliams and Jessica Raine and based on a series of novels by celebrated author Agatha Christie.

In the crowded world of TV detectives, a new drama featuring the crime-solving capers of a married couple has ambitions to bring a mix of thrills and humour to the genre.

Set in a 1950s Britain thrust from the aftermath of the Second World War into the early throes of a new Cold War, BBC1’s forthcoming series Partners in Crime (main image) sees husband-and-wife team Tommy and Tuppence inject some adventure into their marriage when they stumble their way into a world of murder and conspiracies.

Described as Agatha Christie meets Indiana Jones, the six-part series is based on the celebrated author’s first two full-length novels to feature the pair – The Secret Adversary and N or M?

Tommy and Tuppence are played by David Walliams and Jessica Raine respectively, and it was Walliams who first approached Agatha Christie Productions with the idea of bringing the couple to the small screen. Once the BBC was on board, Endor Productions was signed up to deliver the series, which is distributed by RLJ Entertainment.

Little Britain star Walliams says: “I’ve been a fan of Agatha Christie since I saw the movie of Murder on the Orient Express as a kid, when I was about eight, and I was completely blown away by the story and haunted by it for a long time afterwards.

“I’ve read a lot of Christie’s work and recognised these characters hadn’t been done for quite a while – there was a TV series in the 1980s but in recent times there hadn’t been many adaptations, and I thought there was a good opportunity to have a new version.

“There was something for me that really appealed about a husband-and-wife detective duo, and I thought there was something really delicious at the centre of it. You’d have Agatha Christie’s brilliant box of adventures but at the centre of it you’d have a human story. These are characters who are not genii in the way of a lot of book detectives like Sherlock Holmes or Poirot – these were normal people in that situation.”

The Secret Adversary was Christie’s second novel, published in 1922 after The Mysterious Affair at Styles, which first introduced readers to Belgian detective Hercule Poirot. Tommy and Tuppence then appeared in a further four stories through Christie’s career.

“My grandmother was very fond of them,” says Mathew Prichard, Christie’s grandson and chairman of Agatha Christie Ltd. “They featured in her second book and, 50 years later, in her last book. Occasionally throughout her career, when she felt she needed a rest and she needed to lose herself in something, she wrote about Tommy and Tuppence. The Secret Adversary, the first story we’re treating, came in 1922, and N or M? in the middle of the Second World War in the 1940s.

“Tommy and Tuppence represent something entirely different from Poirot or Miss Marple. They represent a partnership, and the most important thing for me is that when I watch them, they are intrinsically Agatha Christie. They are very much the person that I knew in the 1950s, where these films are set, and I can’t help watching them with a considerable sense of nostalgia, affection and recognition of the person whom I respected and loved so much. Dare I say it, I hope we do some more.”

The TV adaptation, timed to coincide with the 125th anniversary of Christie’s birth, plants the action in the 1950s, bringing together elements of the Tommy and Tuppence novels that span half a century.

And for both Walliams and Raine, best known for her work in Call the Midwife and Fortitude, it was the relationship between the crime-solving couple that attracted them to the project. While Tuppence is a woman who sees adventure round every corner, her husband is decidedly more cautious.

Walliams says: “I like that Tommy has to defer to Tuppence, which I think a lot of viewers will recognise, and it will have a lot of appeal that the woman is in charge. The woman is definitely running the show and she’s more intelligent and heroic than he is.

“The idea of Tuppence saving the day and being the more forthright, heroic one is definitely there (in the books), and she’s the one yearning for adventure. We definitely wanted to be true to the spirit of it. I’m the damsel in distress.”

Raine says the “team element” was key to her taking on the role of Tuppence. “It was the way they were equal. There’s not really any sidekick element. I really liked how front-footed she is, how quick-witted. She’s quite funny, intelligent. She’s all of these things you want to be in real life, and I liked how Tommy is more on the back foot, while Tuppence is quite nosey and curious. Putting characters in alien situations is always very attractive because you get to play that. It was irresistible as soon as I read the script. There’s no hint of sadness, she’s a very confident woman. It was really refreshing – she’s incredible.”

With a host of TV crime dramas focusing on the hunt for serial killers who prey on women, both Raines and Partners in Crime director Edward Hall said it was pleasing to portray a woman who wasn’t playing the victim.

“Tuppence is really modern for a woman in the 50s,” says Raine. “She was, I felt, a little frustrated at where her life had got to. I don’t think of her as a typical woman of the 50s, if there is such a thing. It was so nice to play a woman who isn’t in any way put-upon or a victim. That was a massive appeal for me.”

Hall adds: “It’s very hard to find heroines in TV drama who are heroines for reasons other than overcoming some kind of physical or sexual violence, or something else that makes them a victim. You very rarely see women coming in and saving the day. I thought that was a particularly good thing about this project.”

Unlike so many crime dramas on television, Partners in Crime seems to slip effortlessly between tension-filled scenes and the touches of comedy rooted in Tommy and Tuppence’s relationship, which are heightened by Walliams’s comedy instincts.

“What we were trying to achieve in the making of this is a swing in tone from thriller to high comedy sometimes, wrapped up with all the characteristic joys of a good Agatha Christie story,” Hall explains. “It all starts and finishes with the scripts. We had some fantastic scripts from Claire (Wilson, who adapted N or M?) and Zinnie (Harris, who wrote The Secret Adversary), and that guides you.

“If something had a degree of jeopardy, you wanted to make it as scary as possible so that it felt real. And if something was funny, you could swing back at the drop of a hat. There’s a moment in episode five when Jessica has a farce moment with a maid in a corridor, trying to get to a room. The music’s quite fun, it’s quite a funny moment. She gets to the door, she opens the door, and then the atmosphere completely changes when she walks into this room. She’s not meant to be there, it’s very serious – it’s life and death. We just tried to be alive to those changes in tone.”

Hilary Strong, CEO of Agatha Christie Ltd, adds: “A great story is a great story, whenever it’s told, and I think people forget, because Christie’s stories have been around a long time, that she was a really contemporary writer. She was a very contemporary woman of her time.

“One of the fantastic things about Agatha Christie is that her work has always really appealed to young readers. With this piece of work we wanted to get back to that, to have something that’s useful and fun and where people could really see the joy in Christie’s work with those great storylines underneath. Tommy and Tuppence is the perfect way to refresh, to bring Christie back.”

But what would the celebrated author herself think of this new take on Tommy and Tuppence, which will launch on BBC One later this month?

“I’m sure she would have loved it,” says Prichard. “The uniqueness of this project is that you’re almost seeing my grandmother at a certain age on the screen. There’s all the humour, energy and vitality, and it really isn’t like Poirot, even though she wrote a Poirot book a year before.

“This is much more natural, much more realistic. We all know a Tommy and Tuppence, but we don’t know a Poirot.”