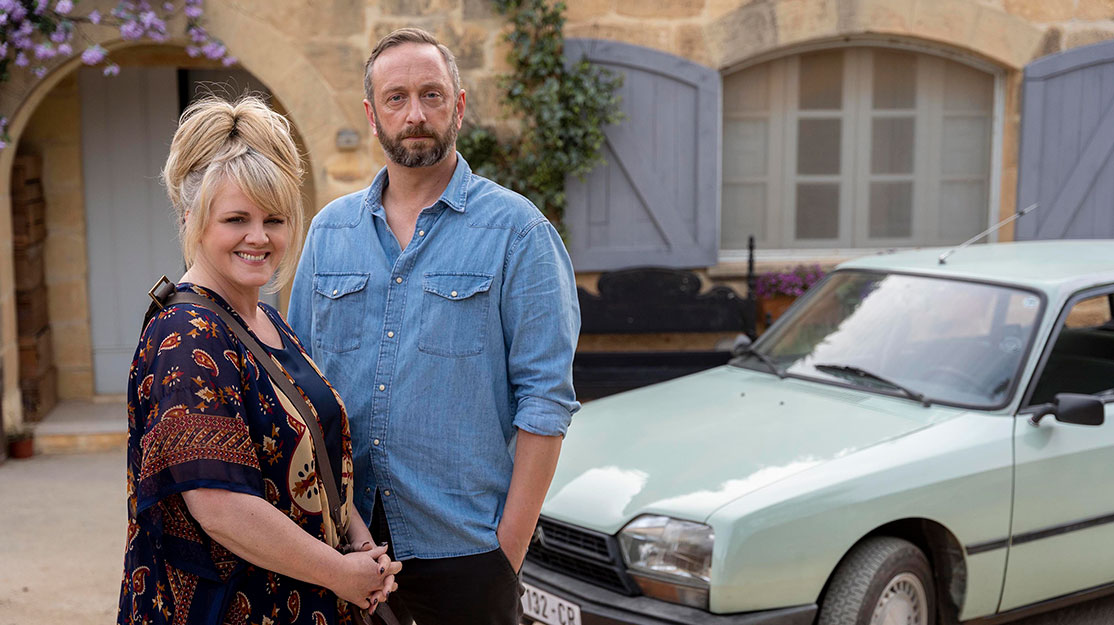 Actors and co-writers Sally Lindsay and Sue Vincent share their experience of creating Channel 5 and Acorn TV drama The Madame Blanc Mysteries, explaining how they came up with its characters and tackled multiple languages on screen.

With almost 40 years of screen credits between them – including appearances in Coronation Street, Shameless, Mount Pleasant and Scott & Bailey – it’s surprising to hear Sally Lindsay and Sue Vincent reveal how anxious they are about the launch of their upcoming series, The Madame Blanc Mysteries.

The drama, co-commissioned by Channel 5 in the UK and streamer Acorn TV, stars Lindsay as Jean White, a Manchester-based antiques dealer who travels to the South of France in the wake of her husband Rory’s sudden death and discovers he has been living a secret life. Vincent also stars as Gloria, the owner of the garage in the sun-drenched town of Sainte Victoire, where Jean and Rory keep a holiday cottage.

It’s not their on-screen roles that filled them both with nervous excitement, however, but the fact the series marks the first major drama the long-time friends have co-written, based on an idea by Lindsay.

“It’s by no stretch of the imagination our first TV show that we’ve acted in, but it is our first TV show that we’ve written together,” Lindsay tells DQ. “Our flavour is unique to me and Sue and we’ve been writing together for six years now – mostly comedy and then we went into drama. When I set up [production company] Saffron Cherry with Caroline Roberts-Cherry, Sue became one of our main writers, so it’s been a meeting of minds really. The reason we’re nervous is because it’s our first big thing on the telly box.”

“It’s an incredible thing for Sally to create something, to write the world together and then to be in it as an actor,” says Vincent. “It’s incredibly different and very exciting, and I guess nerves equal excitement because it’s like, ‘Oh, is everyone going to see what we’ve seen?’ and hopefully they enjoy what we’ve created.”

Produced by Clapperboard and Saffron Cherry Productions, the series opens with Jean as she learns of Rory’s death on his way home from treasure hunting in the South of France. When she then discovers all of their money has disappeared, their shop has been remortgaged and their assets pawned off, her life is suddenly cut adrift until she discovers there was one thing Rory didn’t sell: their cottage in Sainte Victoire.

When an expensive ring Rory was bringing home also vanishes, Jean realises something is amiss and heads to Sainte Victoire in search of answers.

Lindsay is no stranger to Channel 5 dramas, having appeared in Intruder and Cold Call. It was while filming the latter thriller, “in a caravan in the rain,” that she fantasised about making a new project somewhere warm. She then married a sunny climate with the life of a woman she once met on holiday who would travel every month to France to uncover new antiques to bring back to their shop.

“I just had this amazing vision of these towns in the South of France, all these antiques, amazing restaurants and everybody speaking different languages, so that was always in the back of my head,” she says. “Then I’ve always been slightly obsessed with when somebody finds out the life they’ve been living is not actually the life they think it is. Jean is this amazing antiques dealer. She’s built this amazing business, has loads of friends and is very much in love with the husband. Then all of a sudden she realises she has nothing and she has to start again.”

That aspect of Jean’s story was inspired by a bigamy storyline in which Lindsay’s Coronation Street character, Shelley, was once involved, which sparked a number of letters from viewers revealing how they had been similarly betrayed. She then began creating the world of Sainte Victoire during her downtime on the Pinewood Studios set of BBC sitcom Still Open All Hours, before partnering with Vincent on the pilot script that was needed to get a commission over the line.

“I gave her the idea and she wrote half a script, just dialogue-wise, and then we worked on it and we created the full script,” Lindsay says. “Then we sent it to Channel 5. It was the right tone and it was the right feeling. Even though 70% of it has changed, that was what got us over the line. Then Sue and I became the co-writers.”

“We laugh that I always go, ‘She sent me the ingredients and we created a really nice cake together,’ but that’s exactly what happened,” Vincent adds. “The world was so well drawn, it was really quick to get a script together because the characters and the voices were so clear. When somebody gives you the right ingredients, the voices talk to you as a writer, so you can write very quickly.”

The mystery behind Rory’s death and the missing ring plays out over the course of the six-episode series, as glimpses of the titular Madame Blanc reveal an increasing obsession with Jean. But because of Lindsay’s own desire to ensure viewers are satisfied after each episode, several self-contained stories featuring the wider community of Sainte Victoire also unfold. Steve Edge (Starlings) plays Dom, a resident cab driver, handyman and companion to Jean, while Sue Holderness (Only Fools & Horses) is terrible flirt and local gossip Judith. Robin Askwith (Confessions) plays Jeremy, Judith’s adoring husband.

“I’ve always been fascinated by and adored writing character. If your characters are strong enough in their humour, their trauma or whatever their quality is, you can pick them up and place them anywhere you like,” Vincent says. “That’s the beauty of the world we’ve created. You could take any of the characters, put them anywhere in the world and they would still work. I was like a kid in a sweet shop because the treatment was so bright and beautiful and the characters just talk to each other.”

Writing the series together, the pair would read out lines to each other to make sure the humour landed in a show whose characters are as warm as the weather on location on the Mediterranean islands of Malta and Gozo, where The Madame Blanc Mysteries was filmed.

“If it makes us laugh then we assume it’ll make other people laugh,” Lindsay says. “But we’re not writing a comedy here; we’re writing a murder mystery. It’s a bit of joy on a weekend night that’s essentially an hour of sunshine. When we have put gags in, sometimes it jars a bit and it doesn’t really work.”

As a writing partnership, Vincent and Lindsay have learned to be “brutally truthful” to each other when it comes to offering feedback and discussing which lines and scenes they think work and, in particular, which don’t. “We just have to trust each other like that,” says Lindsay, “which is probably the best tip ever if you’re going to co-write with someone you know.”

Their partnership would involve meeting up in person to go through storylines and characters for a particular episode before Sally would go away and write a detailed plot outline, which would then be sen to Vincent to construct the dialogue. They would then meet up again to go through the finished draft line by line. “That’s when the magic happens,” says Vincent, a self-confessed antiques addict. “I’ve learned through Madame Blanc that the more I stick to Sally’s detailed beats, the easier our process becomes.”

“It’s a method that is really quick as well,” Lindsay says. “I don’t know any writing partnership that writes like this. Everybody thinks we’re slightly mental when we explain how it works, because a lot of people just sit across a desk and go, ‘What about this scene?’ We just don’t do that. We do it very much together at the start and very much together at the end. Then the process in between is very singular. It is quite a bizarre way of doing it, but it works.”

With their dual roles writing and starring in the series, Lindsay says the biggest lesson they learned was the importance of having the scripts ready to shoot before filming begins. That meant there were only minor details that needed changing on location.

“You’re shooting yourself in the foot if you don’t get it absolutely right before you get in there,” she states. “Of course, things can change. Locations changed. We lost characters that we had to adapt. We did all that but, essentially, the core of it was there. We didn’t really change much on the scripts at all.

“Having said that, because I was in [scenes] most days, all day, Sue did a hell of a lot of work with our French-speaking actors to make them happy in what they were saying on screen. That was a bit of a learning curve.”

Lindsay reveals there was a time when the show was set to be made without using the French language and accompanying subtitles. “I thought it would look like ‘Allo ‘Allo,” she says, referring to the 1980s British sitcom where all the actors playing French or German characters spoke English but with foreign accents. However, they soon settled on a plan where if there was no English person in the room, the scene would be played in French, while French is also spoken when some characters might not want another person to understand what they were saying.

Vincent jokes that she thought she was fluent because she had watched French series Call My Agent (known locally as Dix pour cent) on Netflix – “but that wasn’t the case,” she admits. “The physicalisation of their language was really useful in the French characters we wrote. The rhythm of the way the French would say a sentence also isn’t necessarily how we would write it as Northern women. It was learning that the conjugation of the verbs. ‘I run to the shops’ would mean you’re sprinting to the shops. It sounds a really obvious thing to say, but it was interesting to learn from an acting point of view because we wanted a lot of our English characters to speak a little bit of French because they’re there living in that place. It was an incredible learning curve.”

Distributed by Acorn Media International, The Madame Blanc Mysteries debuts on Channel 5 tomorrow and will also premiere on Acorn TV in the US, Canada, Latin America, Australia, New Zealand, Portugal and Spain. As creative director of Saffron Cherry Productions, Lindsay is now already working on two new projects with Vincent, while the pair are combining again for a “dark, coercive drama” that is currently being pitched to networks.

Though Lindsay still considers herself an actor first and foremost, “when you realise you’ve probably read more scripts in your 25-year career than most people ever will, you know you can trust yourself on what’s rubbish or what isn’t,” she says of turning her attention to writing. “It’s an instinct. Having the ability to trust that is liberating beyond belief. And just believing in what your experience is telling you – that’s why we’ve gone to the next level.”