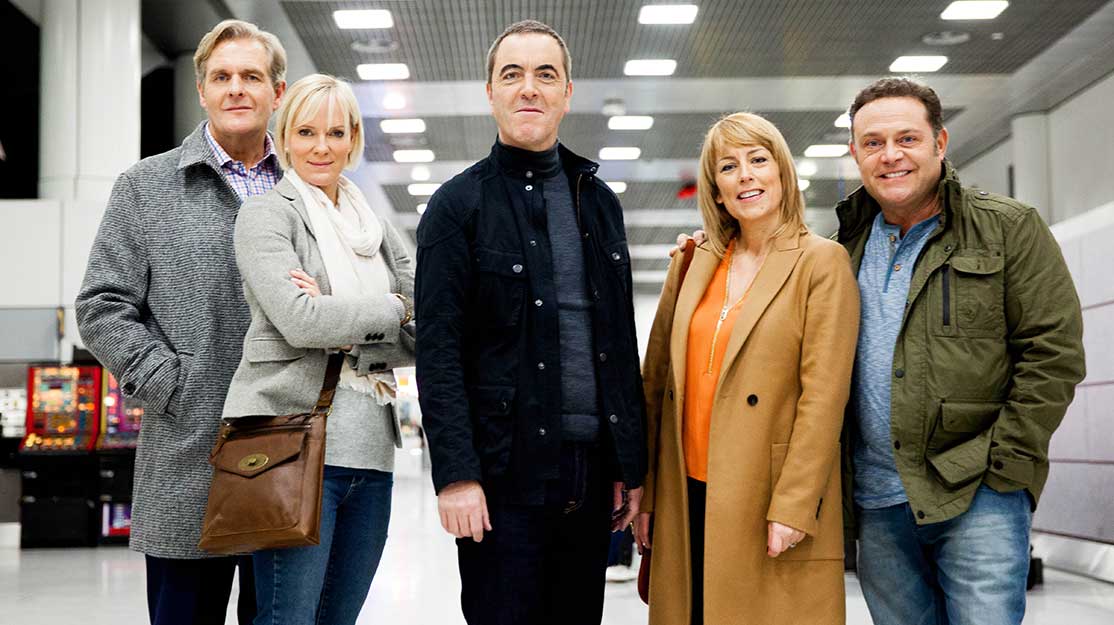 Back in from the Cold

As Cold Feet returns to ITV after more than a decade off air, Michael Pickard speaks to creator Mike Bullen about resurrecting the hit comedy-drama.

It was in 1997 that viewers first became entangled in the lives, loves and friendships of Adam, Rachel, Pete, Jenny, Karen and David.

But now, after a 13-year absence from our screens following its initial five-season run, ITV comedy-drama Cold Feet is back with eight new episodes.

Stars James Nesbitt (Adam), Robert Bathurst (David), Hermione Norris (Karen), John Thomson (Pete) and Fay Ripley (Jenny) have all reunited for the show, which picks up with the friends facing as many challenges as they approach 50 as they did in their 30s.

But amid the current craze for TV reboots and remakes, why did creator Mike Bullen decide to revisit his characters in 2016?

“It started with ITV,” he says, speaking to DQ from his home in Sydney, Australia. “It has been mooted over the years but I’ve only ever wanted to do it if I thought we could do it as well as we did before. But with the passage of time and the point the characters are at in their lives now, I felt there was new stuff to say and enough to justify a new season.

“That was the other thing – we could have come back as a four-parter or a special but I only wanted to do it as a proper season. Initially ITV commissioned six episodes but when we started storylining, I thought there was enough for eight – and one way TV has changed since we were last on is that, with catch-up and on demand, people tend to binge watch. I felt six was no longer a satisfying enough number. That’s two nights’ viewing. So at least with eight you’re getting a more satisfying meal rather than a snack.”

The first episode, which aired on Monday to a slot-busting 6.1 million viewers, saw the gang reunite as Adam announced his impending marriage to Angela (Karen David). Returning to Manchester after years of working abroad, Adam had hoped to bring his friends together to attend his wedding – but not everyone was as excited as him. Meanwhile, Karen told Adam that his son Matt (Cel Spellman) was unhappy at school.

Bullen admits the first script for the new season was “really difficult” to piece together, as he had to re-establish the cast of characters while throwing them into a compelling new story.

“The first episode was the third script I wrote – I had two completely different stories before I settled on that one,” he explains. “It’s a bit unrepresentative of the season because the first episode is really very much about Adam and then episode two goes back to being much more of an ensemble and they’ve each got their own stories going on.

“Most of them are approaching 50 now and their kids are at an age where they’re becoming independent of the parents. I’ve been through that stage myself and I think, as an adult, that’s when you get your life back. It is a quite interesting stage in life because the first season was about the characters settling down and having mortgages, families and careers. This season feels as though again they’re on the cusp of change but now they’re taking stock of their own lives and deciding what they’re going to do next.”

This new run of Cold Feet, technically its sixth season, is neither a remake nor a reboot, Bullen points out. “It’s more like a spin-off,” he notes, “but one that has every character in it. My younger daughter is a big fan of Gilmore Girls [which is being rebooted on Netflix] and I was really interested to see the new trailer because it looks as though their characters haven’t moved on. Really, they’re just putting the old show back on the road again. We haven’t done that. Our characters have absolutely moved on and it’s like a new show but with characters you know before.”

But while ITV was keen to see Cold Feet return to its schedules, some of the cast members were slightly more hesitant. Bullen reveals Norris was the least enthusiastic, though all five stars signed on after seeing the first script and future storylines, reassured that the new episodes would stay true to the original series.

There was also a discussion about bringing back Rachel (played by Helen Baxendale), Adam’s wife and Matt’s mother who died in a car crash in season five, in some form.

“In the very first version, Rachel was present throughout the script where she was like Adam’s conscience,” Bullen explains. “She wasn’t a ghost but she would be in his head. I sent the script to Helen but she wasn’t keen to do it, which I understand. I wasn’t sure we were even going to use her through the season. It would have become very repetitive and dull very quickly so happily for us and her, she said no. It just forced us to be more creative in how we approached her death as an issue for Adam.”

Production on the new season moved rapidly, from news of the commission last November to its premiere just 10 months later. Time constraints meant Bullen had to bring new writers on board, and the series creator jokes that the whole process was “chaotic.”

“At the point of commission, we only had a few months before we started filming,” he recalls. “We went into pre-production in January and we only had three out of eight scripts in reasonably good shape. By the time we started filming, we only had four scripts written so as we were filming, they were catching us up. I liken it to building the track in front of the train. The train was moving faster than us so when we got to the last filming block of two episodes, they were doing a reccy and I wasn’t even sure if we were going to be using certain locations, because we hadn’t absolutely nailed down the story.

“Certainly when we started filming the final episode, I hadn’t finished writing it. I was rewriting while they were filming and it got to the point where, say, I would rewrite a scene but they said, ‘Don’t bother, we’ve already shot it.’ It’s not the way it’s meant to be but it’s fine.”

Perhaps it was risky for ITV to schedule the show so quickly, but Bullen says it was a risk to commission the show, which began life as an ITV comedy pilot, in the first place.

“When you’re up against stuff like Game of Thrones and Homeland, you can see how those shows get commissioned because it’s a very easy pitch,” he says. “But when you’ve got a show that’s basically about ordinary people living their lives, that’s a huge risk for a network.

“Cold Feet is a huge risk because although there will be a big audience who come to the first episode, we’ve got to satisfy them – and if they’re not satisfied, if they leak away, ITV has got a very expensive turkey on its hands because this is an expensive show. The cast are not cheap, and we’ve spent a lot of money on the look of it because it’s always looked really attractive. Hats off to ITV for commissioning it because, in some ways, it was easier not to.”

With a large ensemble cast,  creative challenges included servicing each character with enough storylines while also trying to avoid giving them overly distinct plots that could detract from the group dynamic.

But Bullen is adamant that the show, rested and refreshed after its extended break, can run for further seasons. “If the viewers want it, we can definitely do a second season,” he adds of the show, which is produced by Big Talk Productions and distributed by ITV Studios Global Entertainment. “Potentially there’s enough for three. I never look beyond the season you’re making because you just don’t know. Occasionally we would paint ourselves into a corner – after the first season, Rachel left Manchester pregnant and we didn’t know who the father was. At the time, I didn’t know either – but when you get the commission for the second season, then you worry about it!

“I just hope viewers will be pleased it’s back; that they don’t go, ‘They should have left it alone!’”