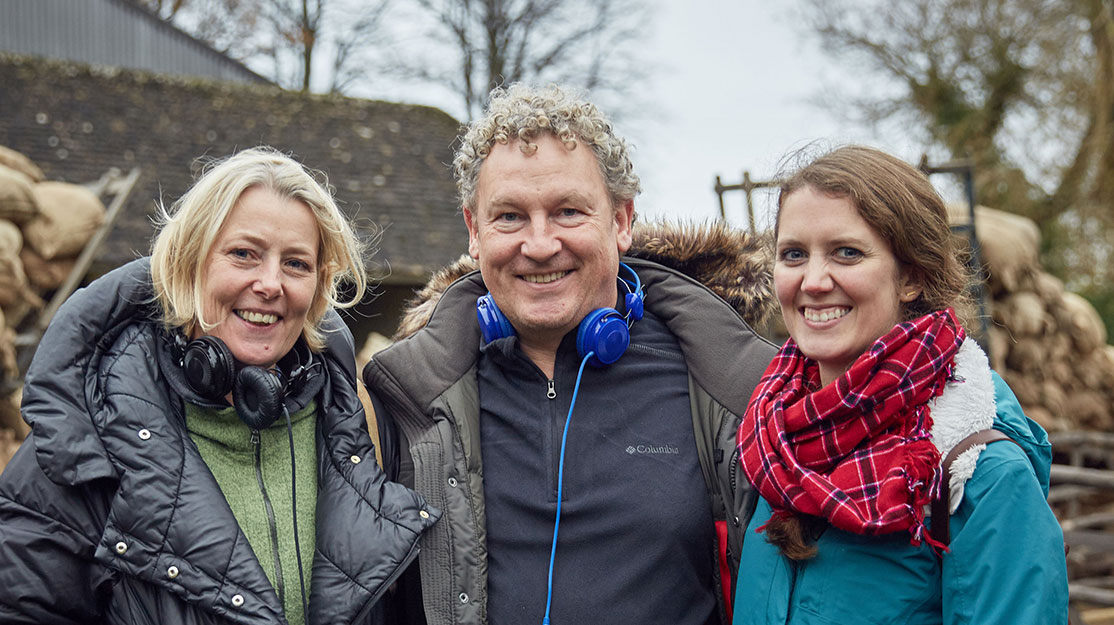 As Life on Mars creator Ashley Pharoah prepares to return to BBC1 with ‘eerie’ drama The Living and the Dead, he tells DQ about the six shows that have inspired his career in television.

Ashley Pharoah (pictured above alongside The Living and the Dead producer Eliza Mellor (left) and script editor Katie Kelly) broke into television on the back of British series including EastEnders, Casualty and Silent Witness. Other credits include Where the Heart Is, Bonekickers, Eternal Law and Wild At Heart, but it’s for time-travel series Life on Mars and Ashes to Ashes that the writer is best known.

In Pharoah’s new BBC1 series The Living and the Dead, Nathan and Charlotte Appleby (played by Colin Morgan and Charlotte Spencer) inherit a farmhouse in 1894 Somerset. But their presence begins to unleash strange, unsettling and dangerous supernatural phenomena that will threaten their marriage.

Produced by Pharoah and Life on Mars co-creator Matthew Graham’s Monastic Productions and BBC Wales Drama, the six-part drama will be available as a boxset on BBC iPlayer as of tomorrow, ahead of its terrestrial launch on June 28. It will also air on BBC America.

Here, Pharoah tells DQ about the six television dramas that inspired him to become a writer and have shaped his own career. 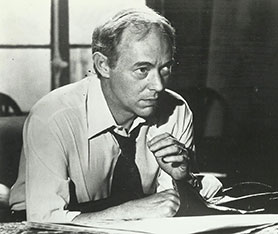 The Roads to Freedom (BBC)
I watched The Roads to Freedom in 1976 when it was already a repeat (having originally aired in 1970). It was a BBC adaptation of John-Paul Sartre’s novels – there’s a pitch that wouldn’t get made these days! But since then it’s been buried – it’s not on DVD – but it has a huge fanbase online. I was 16 and living in a very dull village in North Somerset and suddenly I was watching this series set in Paris during the Second World War and the Occupation. There were beautiful Russian girls and characters stabbing themselves, and it was very exciting.
If you read the books, which I went on to do, the challenge of adapting them must have been massive. David Turner took on the task, and they had things like a character’s voice of consciousness recreated as a voiceover on the soundtrack, which I’d certainly never seen back then, and even now it would be a quite radical thing to do. Michael Bryant played the lead and it had a beautiful theme song sung by Georgia Brown. It was a very distinct TV drama that I’m not sure you’d get away with now. So, as a teenager, it made me think about TV drama for the first time. I always wanted to be a writer but it was the first inkling that I fancied doing something like that. 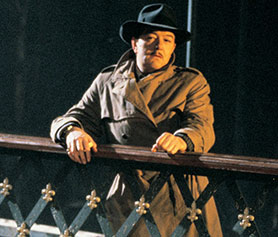 The Singing Detective
Every now and again I do talks or a bit of teaching to students, and someone always asks, ‘Is screenwriting real writing, or is the art really about the directing?’ I always tell them to read the scripts and then watch The Singing Detective (1986) by Dennis Potter, which is probably his masterpiece. I grew up in the Forest of Dean, in the South West, so you always pay more attention to pieces from where you’re from. I remember watching this and it blew me away.
On paper, the plot must appear quite dry. The main character, writer Philip E Marlow, has a chronic skin disease but refuses treatment so his mind starts throwing him into a trash Raymond Chandler novel called The Singing Detective. It was so beautifully written, deeply moving, sexy, funny and complex. I remember thinking at the time, ‘This is TV drama as art.’ It’s as good as any novel or movie. British writers like me who have come along since Potter owe him an enormous debt for making what we do seem part of the cultural conversation. He is, for me, the greatest TV dramatist and The Singing Detective is his greatest work. 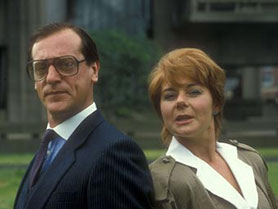 A Very Peculiar Practice (BBC)
While I was a student at the National Film School, its name was changed to the National Film and Television School. All of us students were absolutely appalled because we wanted to make movies, while television was the spawn of Satan and none of us were remotely interested in it. Then, coming home, I vividly remember watching A Very Peculiar Practice – I didn’t really watch much television in those days. Written by Andrew Davies, it debuted in 1986 and centred on a modern campus where an idealistic young doctor played by Peter Davidson arrives at the university medical centre.
There are some things television does much better than film, one of which is locating a moment in culture. A Very Peculiar Practice was a forensic look at British society at that time but done with tremendous wit and humour. The dominant British television dramas have always been about social realism and this comes from that other tradition of high-concept and more surreal series, yet somehow this show seemed tremendously accurate. I like series that mix up tone and genre, and although A Very Peculiar Practice was quite a political piece about Thatcherism and the NHS, it was screamingly funny and surreal, which again was outside the main tradition of British television. It’s very funny and brilliantly written. Andrew Davies (War & Peace) is a great adapter, probably the best we’ve ever had, but I do miss his original work. 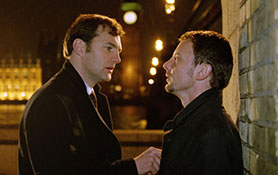 State of Play (BBC1)
One thing all these series have in common is a great writer at their heart – and, of my contemporaries, Paul Abbott is the standout. By the time his show State of Play came out in 2003, I was a professional television writer myself but I still watched it with my mouth open in awe and wonder because it’s so brilliantly written. It has a crop of British actors who all seemed to bubble up at the same time – John Simm, James McAvoy, Philip Glenister and Marc Warren.
Although it works brilliantly as a political thriller – it’s so intense and exciting – it’s a very precise evocation of the political and media class in London at the turn of the century, especially with David Morrissey’s performance as a New Labour MP losing his last vestiges of idealism. Like The Singing Detective, it was TV drama elevated to art and Paul Abbott, probably more than any other TV writer, made us all raise our game because he’s so brilliant and he can deliver in so many different genres. He’s incredibly, ferociously intelligent but also very accessible. If you’d told me when State of Play aired that I’d go on to make Life of Mars with John, I’d have been very happy. I also worked with Marc Warren on Hustle. They became part of my gang but that was the first time I’d seen that group of actors. 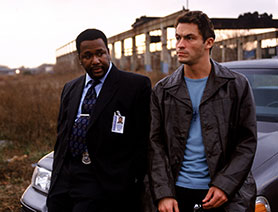 The Wire (HBO)
I came to The Wire (2002), written and created by David Simon, a bit late. I missed it when it first came out and then, annoyed by everyone telling me how wonderful it was, I started to dislike it despite having never seen a frame of it. I picked up the boxset and I remember watching the first couple of episodes and thinking, ‘It doesn’t really work.’ I couldn’t get it – and then a friend said I should turn on the subtitles, because the Baltimore accent is so impenetrable until you get used to the rhythms of the language. So I did that and suddenly, by episode four, I was completely hooked and I watched episode after episode.
What’s really interesting about The Wire is that it’s not perfect. There are episodes and entire seasons that aren’t as good as others, yet it didn’t seem to matter. It feels like a massive, sprawling novel, sometimes just by the sheer vivacity of the writing and the brilliant cast – who knew most of them were British? Although I’d never been to Baltimore, it reeked of authenticity, and there was something about the writing that had this simmering anger beneath it. It was never polemical, it was just there. The fact that the police were no better than the drug dealers, who were no better than the dock workers, made it a superb piece of work. It again raised the game of television drama all over the world.
What I admire about The Wire’s writing, especially, is that it was clearly not just a job. It’s not just a genre piece about cops. There’s complete passion and anger and detail in it. It’s screenwriting and television filmmaking aspiring to be as good as anything. That certainly wasn’t true when I started. Television was very much the poor man’s art form – lots of middle-class people would proudly tell you they didn’t have televisions, but that’s gone now. People now talk about television drama in a very different way and I think some of these series affected that. 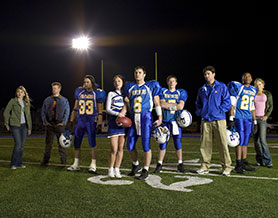 Friday Night Lights (NBC)
I was thinking about the great American cable shows of our time – they nearly all have dark, complicated male protagonists like Tony Soprano, Don Draper and Nucky Thompson. Friday Night Lights’ story of a town’s obsession with its high-school football team has a marriage at its centre – the coach and his wife (played by Kyle Chandler and Connie Britton) – but what was really brave about the writing and the acting was that in that marriage, they didn’t go for any soap tropes. They don’t sleep around, they don’t murder anybody; they just try to love each other and look after their families and the students and football players they’re entrusted with.
There are no monsters in that show, they’re just decent people trying to live decent lives in Dillon, Texas. Although there is tragedy and disappointment for individual characters, there was a sense of love and community that is quite unusual in these cynical TV times we live in.
I love American cable television – shows like True Detective, with all its bleakness and darkness – but Friday Night Lights (2006) punched through. It’s so warm and intelligent, and I remember when I signed with my American agent at CAA, they said if I were an American writer, I’d write Friday Night Lights. I then went away and watched it and thought it was a huge compliment.
One of the differences between the US and the UK is we haven’t really got an equivalent to college football. You point a camera at those little towns in Texas and they look so cinematic but our equivalent would probably be a rugby team in the Rhonnda. I would love to translate the sense of community and the warmth of that show. It’s quite a hard thing to do but I’m sure someone will get it right. And it will be a monster.

tagged in: Ashley Pharoah, BBC1, The Living and the Dead