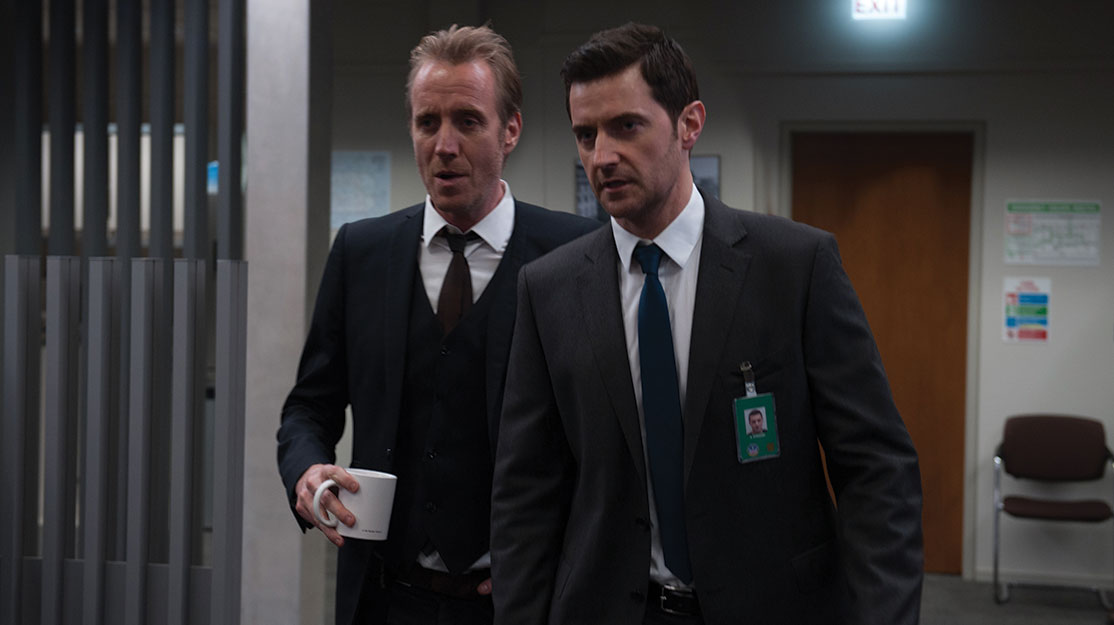 DQ speaks to the cast and creative team behind US spy drama Berlin Station, a modern-day thriller that draws parallels with the real-life case of whistleblower Edward Snowden.

Richard Armitage is a long way from the Shire. While the British actor might now be best known for his role as Thorin in Peter Jackson’s blockbuster film trilogy The Hobbit, the Spooks star’s new role sees him thrown back into the familiar world of espionage in 10-part drama Berlin Station.

The first original drama from US cable network Epix, the story follows Daniel Miller (Armitage) who has just arrived at the CIA foreign station in Berlin tasked with a clandestine mission to uncover the identity of an infamous whistleblower known as Thomas Shaw.

“It’s one of my favourite genres,” Armitage says of his decision to star in the spy thriller. “When there’s a lot of stuff on the market, it’s the thing I get drawn to. It’s down to the Jason Bourne movies. I had a taste of it with Spooks and Strike Back and I was looking to do a really good television show. There’s so much out there in terms of scripts, so the criteria I put out were that I didn’t want anything that had a gimmick and that it had to feel contemporary. The spy drama seems to fit in that mould.”

Berlin Station, which debuted on October 16, doesn’t present a glamorous view of espionage, however, with the series focusing on the everyday as much as the extraordinary.

“We all agreed that a lot of the time in this genre, it tends to be a competence fetish,” Armitage explains. “Characters are either super intelligent or have this special skill set. We wanted this story to be about ordinary people doing extraordinary jobs, how far they’re stretched and how they are flawed and make mistakes. I’m sure that, for people on the front line, it’s got to be one of the most stressful jobs out there. You have to behave like a machine. But they cannot detach themselves emotionally from what’s going on.”

That the show, which is produced by Anonymous Content and distributor Paramount TV, should be grounded in reality was a concept that was quickly agreed upon by Winters and Steinhauer.

“These are normal people who happen to work in the field of intelligence,” explains Winters, who came on board the series tasked with lifting Steinhauer’s story from page to screen. “They have lots of baggage. We wanted to humanise this cast of characters in a day and age that is filled with the more heroic or super-heroic side of people who are fighting the good fight. This show attempts to take a clear view of a system and the people who work within it, and to treat it respectfully in a character-based fashion. More than a desire to thrill or keep viewers on the edge of their seats was a hope to get people invested in the characters.”

The influence of the saga of NSA whistleblower Edward Snowden, who leaked thousands of classified government documents to journalists in 2013, looms large over the central storylines as Armitage’s CIA operative tracks down the enigmatic Shaw.

“The idea itself was conceived post-Snowden so it was deliberate and intentional to deal with issues that are very of the moment,” Winters reveals. “There was definitely foresight and deliberation in our plot. Where this wasn’t the case was in how things in Europe leant themselves to the story after filming began. Unfortunately, because of those terrible incidents in Paris and Brussels, it’s an example where our story will have an even greater relevance.”

Coming from a career writing novels, Steinhauer admits he faced a learning curve moving into television. “As a novelist, you have this extreme level of ownership, but you have to let that go [in TV],” he says. “At first it’s difficult, but once I saw the necessity of it when you’re in production, I became more comfortable with it. A lot of great ideas come out of it – your mind goes in directions it wouldn’t have gone if you were writing alone, so that’s a great benefit. It takes you out of your box.

“When you spend so long looking at words on the page, to have an actor bring their own experiences and preferences and reinterpret those words, it’s quite powerful to see that happen. They take possession of those characters and it encourages me and other writers to work that much harder to make it perfect.”

Winters reveals that working alongside Steinhauer was “a very collaborative process,” adding: “Many of the ideas and structures in the series bible definitely stayed intact but everything was fluid and malleable to serve the evolving story that we set out to tell. What we ended up with was quite different from where it started but, at its core, it was true to that essence at the heart of it. It was a healthy process.”

Production encompassed five months filming in Berlin as well as a week in the Canary Islands, which doubled for scenes set in Saudi Arabia, Morocco and Panama. And while spy stories set in the German capital have traditionally focused on the Cold War period, it’s the modern-day, progressive Berlin that emerges as a central character in this drama.

“Berlin was wonderful,” Winters exclaims. “Coming from the US and given the quantity and quality of programming and cable programming in particular, you go overseas perhaps somewhat subconsciously with a sense of, ‘Let’s see how this goes.’ But it was such a delightful surprise to see the expertise of the crew and line producer who managed to get access to such wonderful locations.

“Shooting in Berlin was fantastic. It was a fun, friendly city on an admin and a creative level. The city, with its layers of history that are so visible everywhere you go, just plays wonderfully into the themes that run through the spy genre. Questions of human identity and the masks we wear were just amplified by the city – a place that has struggled with its own identity in the last century.”

Steinhauer adds: “Most people in the US have a picture of Berlin from the Cold War – grey and dilapidated. I wanted to counter that. This is an extremely colourful city and we needed to bring that out. A lot of shots are set out that way. I didn’t want some CSI thing or people devouring satellite photos. I wanted a more human element. The focus of the show is more on the job and the toll it takes. Spies are normal people who have an abnormal job. It’s hard to take for some people.”

Before production, Armitage worked with a German language coach and used Rosetta Stone recordings to perfect his German accent for lines that called for him to speak the language, while the British actor admits it was also a challenge to find the right American dialect for his character.

“I found it difficult to drop into and out of that voice so I tended to stay in it all day,” he reveals. “I stayed in character for five months! Most people I was talking to were either American or German so it just felt easier. But speaking fluent German in front of Germans was really challenging.

“Another challenge was shooting in sub-zero temperatures, as we filmed during the winter. In episode four there’s a flashback to Chechnya and it was minus 15 degrees. On The Hobbit, it was mostly too hot but this was different – your jaw freezes, so speaking in a foreign dialect is very difficult!”

Television is far from a new medium for Armitage, whose small-screen credits range from Hannibal to Cold Feet and The Vicar of Dibley, in addition to the aforementioned Spooks and Strike Back. “I want to do both TV and film,” he says, though his latest role is in the off-Broadway play Love, Love, Love. “I’ve done a lot of independent films since The Hobbit but there’s certainly some pleasure in taking something with a bit of job security, and the opportunity to develop a character over 10 episodes is really appealing. With a film of 120 minutes, there’s not enough meat on the bone. TV has changed so much. Most actors want a great TV show and then go and do a couple of movies or theatre during the break. It’s about keeping yourself visible.”

Steinhauer is also keen to do more television after landing his first show, for which he wrote three of the 10 episodes. But once the case of Thomas Shaw is unwrapped, will there be a return visit to Berlin Station?

“The characters are rich enough that you can keep them alive for years,” he says. “One of the engines of the show is that the focus is on one location, rather than one character. People can come and go. It could go on for 25 years.”

He adds: “I would like to do more TV. There are always a lot of ideas flowing around. This has showed me that I can do it and I’m not too bad at it. It’s certainly something I would try again at some point in the future.”