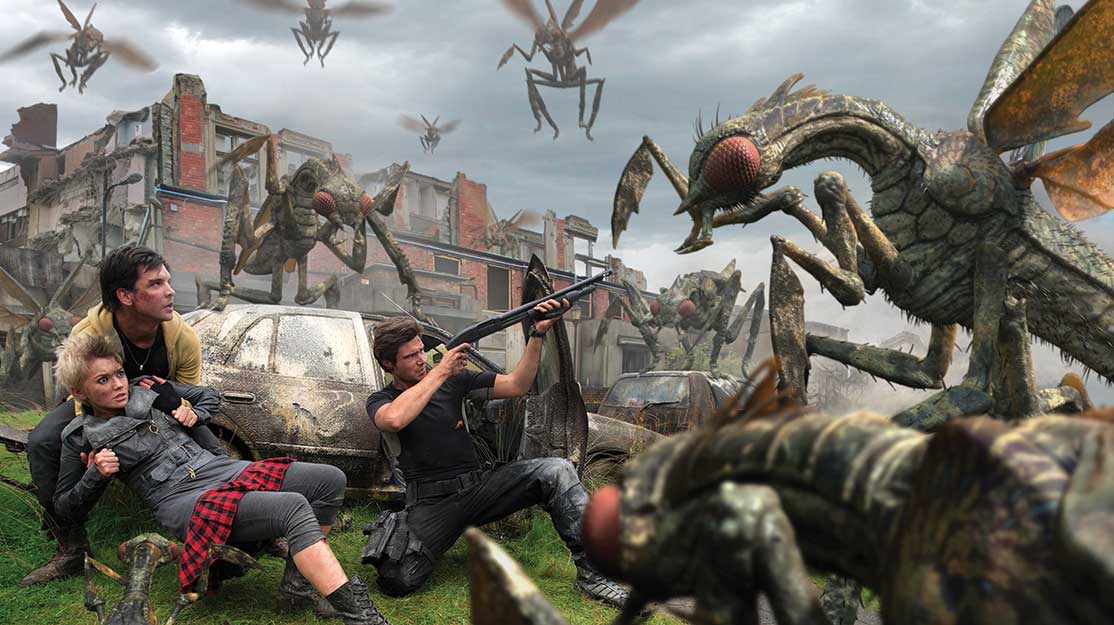 About Time: How to make time travel work on TV

DQ looks at the latest dramas to incorporate time travel into their storylines, and asks those behind the programmes exactly how they tackle a plot device that so often lends itself to confusion and complications.

Stephen Hawking, the theoretical physicist whose life was the subject of recent award-winning movie The Theory of Everything, hasn’t ruled out time travel completely. But he’s pretty sceptical about our ability to travel back in time and change or participate in events that have already happened.

His doubts were summarised succinctly in his 1998 book A Brief History of Time, in which he asked, quite reasonably, “If time travel is possible, where are the tourists from the future?”

Hawking’s concerns haven’t, however, stopped the TV business from dabbling in time travel. In recent years, a wide array of shows, ranging from hardcore science fiction to historical romance, have used time travel as a central narrative device.

A case in point is Hindsight – recently cancelled despite initially being handed a second season – the VH1 scripted series about a woman (Becca) who finds herself propelled back in time while wrestling with doubts on the eve of her second wedding.

But there are no wormholes, extra dimensions or warp drives in Hindsight, says show creator Emily Fox, who explains that Becca’s journey back to 1995 occurs when she passes out in an elevator shaft.

“We’re not trying to crack the code of time here, we’re telling a fairytale,” she explains. “Becca’s experience is something most people think about at some point – what if I had taken a different path or made a different decision at a certain moment in time?”

Of course, Becca’s attempts to change the past don’t work out as planned. “The dirty little secret of time travel is that there is no such thing as perfect knowledge,” says Fox. “Becca’s attempts to alter her future for the better inevitably go wrong.”

Fox says the writing team on the show deliberately didn’t get into a broad theoretical debate about time travel “because Hindsight isn’t that kind of show, and we sensed that our simple ‘what if?’ premise would become unwieldy.”

But there were the inevitable fan questions, “such as why doesn’t Becca make herself rich by investing in Apple shares? Again, the answer to that was that we were trying to tell a more intimate story about a character whose priority was not to get rich quick but to find an emotional resolution,” Fox adds.

Historically, there haven’t been many female time travellers in fiction. But it’s interesting to note that there are currently two on TV, the other being Claire Beauchamp Randall, the heroine of Starz drama Outlander, which is based on the book series by Diana Gabaldon.

Claire is a Second World War combat nurse on a trip to Scotland with her husband. While there, she touches a mystical stone and wakes up in 1743 – in the middle of a military skirmish between the British and the highlanders. She sides with the Scots and falls in love with one of them (Jamie).

Starz MD Carmi Zlotnik says time travel is not used in a heavy-handed way during the first season (though it will be more prominent in season two), but adds that it does inform the relationship between Claire and Jamie. “It gives the relationship a different dynamic than if this was a traditional historical romance,” he says. “Claire has more independence than Jamie would expect from a woman of his own era.”

The fact that Claire is from the 1940s, not the present day, meant the production had to contend with two historical time periods, not one.

But like with Hindsight, a key theme of Outlander is whether the future can be altered or taken advantage of. Zlotnik adds: “At the end of season one, Claire and Jamie set off to try to stop the battle of Culloden, which she knows will end badly for the Scots. But she doesn’t know if there is a way for her to stop the Scots being decimated or if history is on some kind of autopilot.”

Interest in time-travel stories isn’t limited to the Anglo-American market. In the 2001 Mexican telenovela Aventuras En El Tiempo, central character Violeta discovers a time machine built by her grandfather that allows her to witness her own birth and her mother’s death.

In Korea, meanwhile, one of the top shows in the last couple of years has been Nine: Nine Times Time Travel, which aired on cable channel tvN in 2013. And like Hindsight and Outlander, the show explores concepts like the path not travelled, the unattainableness of perfect knowledge and the way in which actions have unintended consequences.

“Nine is a fantasy drama where Lee Jin-Wook, playing a TV anchor, gets his hands on nine doses of a mysterious potion that allows him to travel 20 years back in time nine times,” says Jangho Seo, head of international sales and acquisitions at distributor CJ E&M Corporation. “Each time he goes back, there are severe consequences for the present-day timeline.”

Although there are now a number of time-travel series on the Korean market, Nine was one of the first shows to see the potential of time travel in redefining the romance genre. Seo says: “The time-travel aspect was planned from the pre-production phase with a very clear purpose. The majority of Korean dramas focus on love stories and melodrama. As such, the main characters face dilemmas involving tangled relationships and disruptions from sub-characters. With Nine, we wanted the level of dilemma to reach its maximum.”

This approach is one reason the show has travelled so well, says Seo. To date, it has sold to 55 countries and has been picked up by a US prodco for development as a scripted pilot.

While all the above shows use time travel as device to tell relationship-based stories, it also continues to have a role to play in science-based action-adventure.

In ITV’s hit series Primeval (pictured top), for example, the idea of earthquakes in time, called ‘anomalies’ in the show, was developed so dangerous creatures from the past or future could accidentally travel through time, thus causing havoc wherever they went.

Tim Haines, creative director at ITV Studios and former creative director at Impossible Pictures, where he co-created and executive produced Primeval, says: “Time travel was a device to conflate creatures from different era. The anomalies were conceptually as simple as possible, so we did not need the audience to be excited about the process; it was more about the consequences of thrusting the fauna from a different time into the present and following the chaos.”

While time travel wasn’t intended as the core of Primeval’s concept, it did inevitably play its part in storytelling. In episode one, the central character Nick Cutter and his wife Helen stumble across the remains of an expedition that has been attacked by a monster, and then realise that the destroyed expedition is the one they are now on.

“The strongest time-travel storyline in Primeval was Cutter’s wife coming back to haunt him (after being presumed dead for eight years),” says Haines. “As for individual stories, the bigger the incursion, the trickier it was to make believable, because (the central characters) were trying to keep it secret. So being surrounded by terror birds in a wood shack worked well, but a T. rex in the city was less satisfying.”

Like his peers, Haines avoided dwelling too much on paradoxes caused by time travel. “We talked about this a lot at the beginning and end of the series. But as the series went on, time travel and paradoxes became less relevant, if occasionally necessary,” he says. “Our science was more biological, using anomalies to explain evolutionary and crypto-zoological mysteries. There was consistency and the fans did not mind, even though I am sure if you looked closely you would have found holes.”

One dynamic that sets Primeval apart from other time-travel shows is that it has characters coming back to the present from an imagined future. The future’s impact on the present is also the central theme in Refugadios (Refugees), a BBC Worldwide/Atresmedia coproduction that aired in Spain in May but has yet to arrive in the UK.

Made by Bambu Producciones, the central premise of Refugees is that three billion people from the future have travelled to the present to escape an imminent global disaster.

The scale of the refugee problem is framed through a few key establishing shots, but the story itself focuses on a small town. Explaining the show at Mipcom 2014, executive producer Ben Donald said: “We haven’t gone global with a story investigating the future, that’s just a premise that helps bring out secrets and hidden stories among the protagonists.”

This is a key point. Like most the other series in the genre, Refugees uses time travel as a device to tell a certain kind of human interest story – similar to series like Les Revenants (The Returned) and Äkta Människor (Real Humans).

Donald added: “Without being didactic, Refugees is about the global immigration debate, which makes the series feel incredibly relevant. Science fiction at its best can hold up a mirror to the world and act as a fantastic metaphor.”

This assessment is echoed by writer Howard Overman, who has used time travel in Dirk Gently, Atlantis and, most prominently, his acclaimed drama Misfits.

“Sci-fi works best when it speaks to the human emotions in us. It’s a very human thing to think about the mistakes we’ve made and wonder what it would be like to rectify them,” he says. “In Misfits, time travel allowed one of our central characters to compare who he is now to what he would become in the future. Showing characters who have something at stake is more interesting than if we’d just used time travel visit the Victorian era.”

Overman says he tried hard to keep temporal consistency in Misfits’ time-travel storylines. “I was really careful about avoiding paradoxes,” he admits. “It is easy to overlook the ripple effects that are created when you use time travel. But then if you are worried about logic you probably shouldn’t be doing time travel at all.”

BBC primetime drama Atlantis also used time travel, with central character Jason Donnelly travelling back from the present to the ancient city of Atlantis via a deep-sea temporal disturbance. In that case “we started out with the idea that our hero might have some kind of basic knowledge of Greek mythology, but gradually dropped that idea,” says Overman. “In hindsight, it may have worked just as well if he had been a Greek guy washed up on the beach of Atlantis rather than someone travelling in time. But that’s the benefit of hindsight.”

For the most part, then, TV time travel is used as an allegorical device. But are there any shows for sci-fi geeks, comparable to movie extravaganzas like Terminator or Interstellar? Well, yes – but it seems the TV industry has a tendency to look back in time for its inspiration (similar to the way robotics stories give Isaac Asimov a respectful nod).

US cable channel The CW, for example, recently aired a remake of 1970s show The Tomorrow People, in which a core power of one of the main characters is the ability to manipulate time.

Then, of course, there is the BBC’s sci-fi series Doctor Who, rooted in a mythology first invented in the 1960s. Speaking to BBC America, Doctor Who showrunner Steven Moffat summed up his own feelings about the appeal of time travel as a storytelling device: “The moment you say time travel is an incidental factor of your world, it changes everything.

“You could be dealing with the consequences of an action you have not yet performed. From the point of view of a writer, especially a writer like me who likes a puzzle-box structure, it’s fascinating. The future could be your past. Come on, that’s brilliant.”