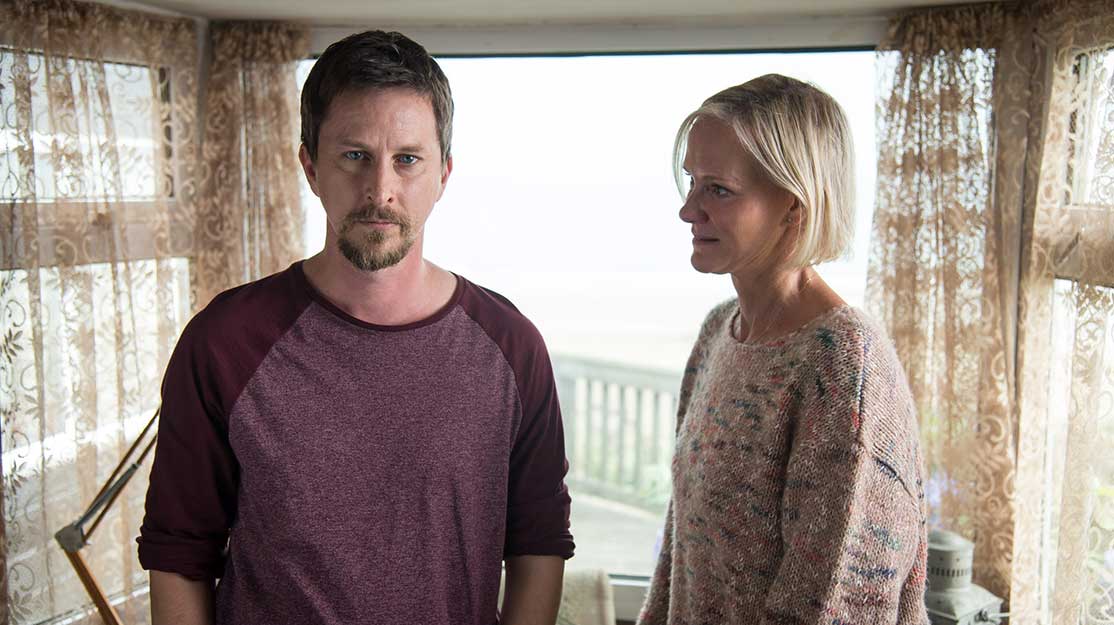 You be the judge

Lee Ingleby is out to prove he’s not a murderer in ITV’s emotionally taut four-part drama Innocent. DQ speaks to writers Matt Arlidge and Chris Lang and producer Jeremy Gwilt about putting viewers at the heart of this moral dilemma.

At the heart of every good drama is a moral dilemma, according to writer Matt Arlidge. If that’s the case, Innocent, created and written by Arlidge and Chris Lang, is a very good drama indeed.

The four-part series, which launched last night on ITV in the UK and runs on consecutive nights until Thursday, sets out its stall in the opening scene. David, played by Lee Ingleby, appears on the steps of a court and tells the waiting press that he’s spent seven years in prison for murdering his wife – a crime he claims he did not commit. During that time he’s not only lost his liberty and reputation but his kids as well. The question is, do you believe him?

To the horror of his wife’s family, including sister Alice (Hermione Norris) and her husband Rob (Adrian Rowlins), the case is reopened and the ensuing investigation will see allegiances flip-flop as the drama unfolds. Other cast members include Daniel Ryan as David’s faithful brother Phil, Nigel Lindsay as DI William Beech and Angela Coulby as DI Cathy Hudson.

Arlidge, whose credits as a producer include Mistresses and Cape Wrath, says that the aim is to ask the key characters big moral questions so that the viewers put themselves in their shoes and ask: ‘What would I do in that situation?’

The show, distributed by All3Media International, was inspired by articles Arlidge and Lang had read about miscarriages of justice. It made them think about the impact of those judgments and the consequences for the families involved. “It uses a thriller structure to explore how families work when there’s pressure put on them that exposes the fault line of a family dynamic,” says Lang, whose ITV series Unforgotten, which is filming its third season, means he is no stranger to crime drama.

It’s the combination of this thriller structure wrapped around detailed, compelling characters that is core to the success of ‘domestic noir.’

“If David’s telling the truth, it means there’s a killer out there,” continues Arlidge. “There’s someone who’s killed and got away with it, and that’s something we were always interested in exploring. On the one hand, what’s it like to be imprisoned for a crime you didn’t commit? But conversely, if you did commit murder and get away with it and lived with it for eight years, what’s that like?”

Innocent producer TXTV was founded by Arlidge, Lang and producer Jeremy Gwilt and each of its projects relies on all three creative directors being available to collaborate. While Lang’s Unforgotten was produced by Mainstreet Pictures, Innocent was greenlit at a time when the TXTV trio were free to work on the show together. Gwilt was involved in the development process from the outset and he describes this tight, creative relationship as one of the features of their company.

“Although creative imperatives take priority, we’re never afraid of confronting practical issues during storylining and scripting that might impinge on the creative during production,” says Gwilt. “It’s usually best to address them at the earliest stages of a project’s inception.”

In-demand British actors Ingleby (The A Word) and Hermione Norris (Cold Feet) head up the cast, but Gwilt says it’s getting less common to have on-screen talent in place before pre-production and describes scheduling as a jigsaw puzzle. “The availability of actors is one thing,” he explains, “but their availability also has to match the availability of locations and the design department’s ability to create our sets. In most cases, the shooting schedule is built sequentially around the locations then the cast has to fit in with that.”

Although the show is set on the Sussex coast, filming took place in Ireland and the taut emotions of the drama are counterbalanced by sweeping cinematic drone shots along the coastal estuary. Lang says they are the lungs of the piece, giving it space to breathe. Innocent editor Michael Harrowes adds that the isolated hut on the beach to which main character David returns after his incarceration adds to the emotional impact of the story.

“There was a craving for space and freedom,” he says. “David was trapped; set free from prison but trapped in this enormous space where he was surrounded by the coast. Editorially, it was a genius move to set it on the coast.

“We built this technique where we would build a character to a point of crisis, to a point they were unable to proceed emotionally and we’d crash out into these landscapes, these fabulous drone shots, and it worked incredibly well for us.”

Gwilt says director Richard Clark (Outlander, Doctor Who) was brought on board because of his reputation for emotionally driven drama: “His visual style is also fluid. It features developing movement and this was especially desirable as we have a large number of potentially static dialogue scenes in interview rooms. It subtly introduces pace and energy and allows us to explore every nuanced reaction from the characters.”

Finding areas of Ireland that matched the topography and architecture of the south coast of England was challenging, but ensuring a seamless transition between the weather of these two geographical areas was even more problematic. “The weather in Ireland was incredibly windy and for a couple of days it blew at almost gale force,” remembers Gwilt. “We were shooting in a wooden house right on the beach. It got so windy during a night shoot that we couldn’t even use the cranes we’d hired for the lights. And the blackouts we’d rigged around the cottage to enable us to shoot night interiors during the day were virtually ripped to shreds. We had an army of brilliant electricians and riggers who were clinging to our equipment for dear life so that we could carry on filming.”

In terms of Innocent’s appeal to an international audience, Lang says it tackles universal stories and themes. “Every society in the world will understand the difficulties families face, and every community ultimately believes in the idea of family and wants it to prevail,” he concludes. “So when you threaten it and place it under immense strain as we do in this story, every community in the world will want the family to prevail. Everyone starts in one place and is slowly is forced by the changing story to reappraise. Every character has to go a long way as well. It’s a big shift that all of them have to make.”