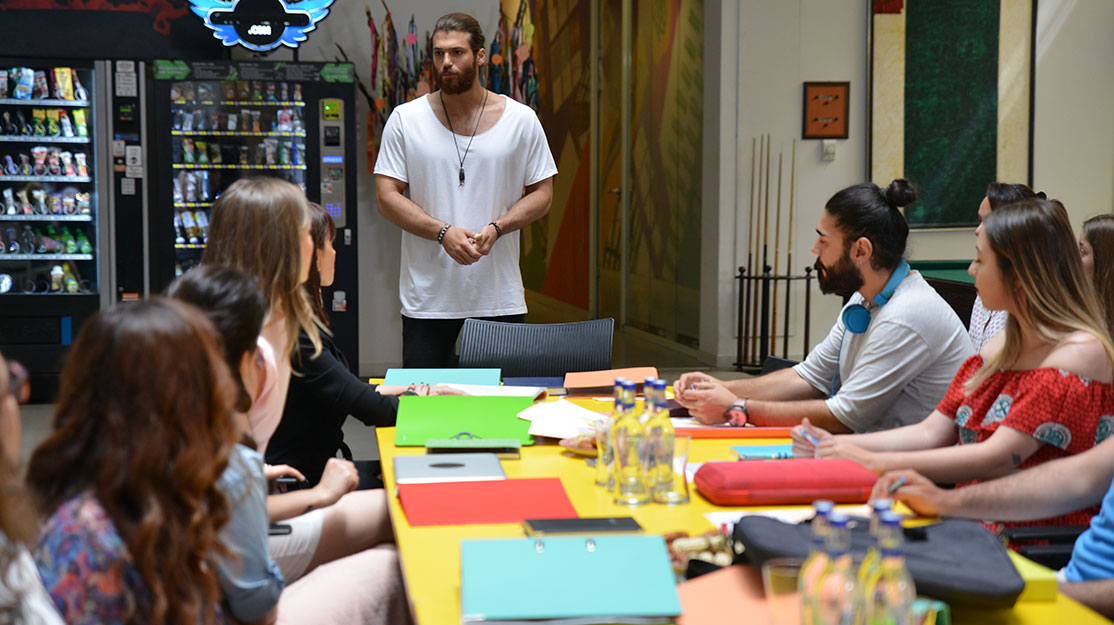 In just a few short years, Turkish actor Can Yaman has become a global star on the back of the rising popularity of the country’s drama series. He tells DQ about his approach to acting and why he’s a fan of rom-coms.

In a matter of weeks, Turkish heartthrob Can Yaman will lose the gorgeous locks that have stolen the hearts of women the world over.

Yaman’s iconic top knot will get the chop and he will have to go clean-shaven to complete his obligatory military service. For 21 days in January, Yaman will undergo basic army training in case he is called up to serve his country.

The 29-year-old seems disappointed about the style overhaul, particularly because he fought so hard for the look in his recurrent role in global smash drama Daydreamer (Erkenci Kuş). Having a big say in the styling of the characters he plays is a deal breaker for the star who insists on dictating a character’s looks.

“I have to deepen the character and I help with the styling because it’s important to the character. I choose his hair and what he wears. That’s not written in the script,” he tells DQ at Mipcom. “The way I do things is really hands-on.”

Yaman started his professional life as a lawyer before becoming a model and then only four years ago turned his attention to acting. In that short time he has become one of Turkey’s hottest exports, starring in dramas such as Daydreamer and as a clean-cut businessman in Bitter Sweet (Dolunay). This year he won the Best Foreign Actor Award at the Murex D’or in Lebanon and E! News named him TV’s Top Leading Man, a title he wrested from Supernatural’s Jensen Ackles, a four-time winner of the title.

But Yaman’s international fame is not simply off the back of Daydreamer’s success, it’s also down to the rise of Turkish drama globally.

Produced by Gold Film and distributed by Global Agency to territories such as Spain, Greece, Israel, Croatia, Bulgaria, India, Iraq, Ukraine, Poland, Czech Republic and Lithuania, the show is about a troublesome daydreamer, Sanem (Demet Özdemir.), who falls in love with the free spirited photographer Can (Yaman).

Daydreamer has made an A-list celebrity of the star. A giant, multi-storey billboard depicting Yaman kept a watchful eye over Cannes’ Croisette during Mipcom in October and the star couldn’t go anywhere without being followed by fans and paparazzi.

As the face of Turkey’s growing drama presence, Yaman credits his industry’s work ethic as the reason why everyone loves drama from both sides of the Bosporus.

“I would really love to see Turkey grow faster than this,” he says. “We produce a lot [of television] because we have a lot of channels in Turkey. When we make one episode it runs for, like, 140 minutes and can be cut into three episodes, so it’s a paradise for anyone who is buying it.”

Turkey’s high turnover of content may have garnered it international praise, but it has taken a toll on Yaman, who is looking forward to his military service as a welcome break from the gruelling shooting schedule.

“It can be devastating,” he says. “You’re working 16 hours a day, every day. So you have to love what you’re doing, love your character and love the people you are working with.”

The relationships amongst cast and crew is critical to not only surviving long days on set but to also giving the actors space to improvise. “We are laughing or joking on the set because we have a good relationship; if we didn’t have it would be very hard,” Yaman says.

On improvising, which is essential to his process, he adds: “Some characters have to be by the book and stick to the script. But I can’t do that, I hate it and I have to improvise.”

Romantic comedies are also more conducive to improvising, which is just one of several reasons he is keen to film as many as possible in the coming years.

Conscious his 30th birthday is looming, Yaman’s future is weighing heavily on him. He wonders whether he can continue in the genre and is now eyeing action roles.

“There’s a romantic side to me which women love. But when I’m 35 or 40 I may not be able to make rom-coms, so my producer and I are talking about switching gear,” he says. “People also want me to do action, but a lot of actors can do action, while not many can do rom-coms. Rom-coms make you go deep into a character and you have to help people be connected to the character.”

Make no mistake, Yaman is a man’s man who reveres some of the most alpha-male characters in recent TV history, from Walter White in Breaking Bad to Californication’s Hank Moody and Barney Stinson from How I Met Your Mother. They also inform his acting method and his desire to spend a lot of time curating and developing the characters he plays.

“I like shows that are character-driven. I can like the show only if the characters are strong,” Yaman says. “I have to be able to relate to the character and they have to inspire me.”

One thing he knows as he contemplates the rest of his career is that he is far more interested in acting than moving behind the camera to direct.

“What I love most about acting is when you finish something you can bring your friends and family together and have about 20 people in your lounge watching it together,” Yaman says. “I don’t know if there’s any other profession where you can share what you love and do with others. That’s what makes our profession so special. I love sharing and I love what I do.”

With Daydreamer now having wrapped after more than 160 episodes, Yaman has a couple of months off before his military obligations at the beginning of next year. Other than coming to terms with entering his fourth decade, the actor plans to use the time to catch up on some much-needed rest.

“Right now I’m enjoying my freedom. I’m going to stay calm and relaxed before I have to go to the military,” Yaman says.

But he promises his producer is searching for the next script that will let Yaman sweep more women off their feet on his return.