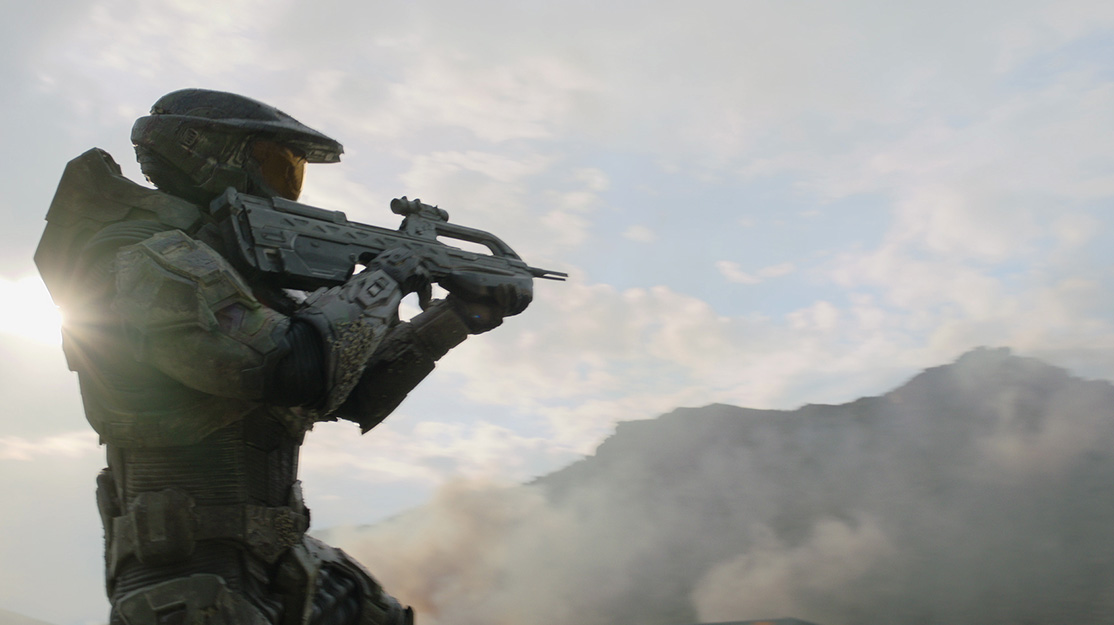 For more than 20 years, gamers playing Halo have immersed themselves in a deadly 26th century conflict  between humanity and an alien threat known as the Covenant. The fight is led by the Master Chief, the commander of a group of super soldiers aided by AI that takes the form of a woman called Cortana.

Five games have followed since the original Halo was released as the flagship launch title for Microsoft’s Xbox in 2001 – Halo Infinite came out last year – while the Halo universe has also grown to include spin-off games, books, comics and an animated series called Halo Legends. And now that world also includes a high-end drama based on the games, Halo: The Series.

Shepherding the show through a long development phase, one that began even before the series was first announced in 2018, has been Kiki Wolfkill, head of transmedia and entertainment at 343 Studios, which runs the Halo franchise for Xbox Game Studios.

“One of the things I’m super happy about is transmedia went from kind of a buzzword probably 10 years ago to a legitimate form of media expression,” Wolfkill tells DQ. “How we look at it from a Halo perspective is, in its simplest form, it’s a way for us to tell stories in different mediums.

“We have a 20-plus-year-old IP now that’s very much centred on our video game, and layered underneath 20 years of games is a universe, lore, characters and a mythology and history, so how do we look at ways of giving people different entry points into the universe and ways of bringing new audiences into the universe?”

When it comes to expanding the world of Halo, the 343 team first work out what kind of story they want to tell and in what medium it would be best told. Projects like Halo Legends also bring new creative voices into the mix, compared with the games, which are told from the studio’s perspective.

“But for sure, the television series is probably the biggest transmedia effort we’ve embarked on, as is proven by the amount of time it took us to get here,” Wolfkill says. “It was really meant to be a way of expressing Halo and the Halo stories in a different way, outside of what we call ‘core canon.’ It’s part of the Halo silver timeline, which means it’s very true to the core belief systems of Halo and who the characters are and some of the bigger historical moments of Halo, but is optimised for television to create eight or nine hours of very character-focused drama.”

While it may seem like computer games are all over film and television – see recent Sonic the Hedgehog and Resident Evil adaptations, among others – Wolfkill says that, for a long time, Hollywood wasn’t particularly interested.

She believes that can be at least partially attributed to the majority of the industry failing to understand the depth of narrative and mythos games can have, and also the attachment players can develop to games through the immersive experience of playing them.

“At the same time, it’s really tricky to go from such an immersive medium where you have so much player agency and so much of the story is really co-owned by the player to then take it into a medium where it’s very authored and you’re asking the viewer to sit back instead of lean in and participate,” she says. “When you actually start to get into the practice of it, you discover it’s really creatively complex to navigate.”

Development of a Halo TV series began after the release of the Halo 4 game back in 2012, with ambitions to explore the Master Chief and the man inside the armour, John-117.

“That’s when it was clear TV was the way to do that because, rather than having two hours [for a film], you have a much longer span of time to really do some character development,” Wolfkill says. The studio signed on with Steven Spielberg’s Amblin Entertainment and then partnered with US premium cable network Showtime, but it wasn’t until the creative team behind the camera was put in place in 2018 that the series started to become a reality. Steven Kane and Kyle Killen developed the show, while Paramount Global Content Distribution handles international sales.

After overcoming further production delays caused by the pandemic, the series subsequently debuted on Showtime’s sister streamer Paramount+, first arriving in the US this March and then being made available around the world a few months later.

Opening in 2552, episode one introduces humans on the planet Madrigal, who are fighting for independence from Earth when a fatal encounter with the Covenant complicates things, leading to the involvement of Master Chief John-117 and his fellow Spartan super soldiers.

Blending personal stories with action, adventure and a detailed vision of the future, Halo: The Series stars Pablo Schreiber (The Wire, Orange is the New Black) as the Master Chief, with Natascha McElhone (The Truman Show, Solaris) as Dr Halsey – the brilliant, conflicted and inscrutable creator of the Spartans – and Jen Taylor as Cortana, the most advanced AI in human history, and potentially the key to the survival of the human race.

“There are these epic sci-fi stories, but at the heart of each of them is a more intimate story about humanity, heroism and hope,” says Wolfkill. “That’s probably the strongest thread through all that we do. It can be a dark story with humanity at threat, but hope is a huge part of it, and then the wonder of sci-fi.

“The television series explores all of those things and goes back a little bit to the origin story of the Spartans. It is about the Master Chief, who’s the best of them all, and explores who he is as a person. These soldiers have been trained since they were children to be very single-minded human weapons, so what does it mean as he starts to discover a little bit of his own humanity and, in doing so, understand what he’s fighting for and what he’s saving?”

Those themes of hope, heroism, humanity and wonder became the building blocks for Halo – and potential subsequent series – with a focus on exploring the Master Chief character and offering a different perspective from those in the games. The Chief’s relationship with Cortana also comes under the spotlight, while viewers will discover more about Dr Halsey, the mastermind behind the Spartan project.

At every stage, Wolfkill was involved in development and production to ensure the project remained true to its source material – whether that’s the characters that appear or the “Halo-ness” of the world on screen. Senior Halo writer Kenneth Peters was also on set as a consultant.

“One of the big pieces of season one in particular is the worldbuilding,” says Wolfkill. “With the hope to bring new people to Halo, defining that world is super important. And then for fans, how do we give them the things they expect and also delight them with things they may not expect?

“Some fans really love and appreciate those things, and some fans don’t. That’s not unexpected. I have so much love for all of our fans. Some fans like being able to experience the story differently, and other fans really want very strict adherence to a core canon. That’s perfectly understandable. There are other experiences that deliver on that. This one’s a little bit different.”

Part of working in transmedia is “having the stomach for some of the fan feedback that isn’t as positive,” the exec admits. On the flip side, it’s about opportunities to create new fans and reach new audiences as well as the diehard fans. Wolfkill continues: “The thing that’s been most gratifying for me in terms of working across the fandom and the impact of the show is how many fans have said, ‘I loved that I could share this with person X, Y or Z in my life who never understood why I loved Halo so much. And now they sit and they watch the show with me and we can enjoy it together.’ That’s incredibly gratifying,”

One lesson Wolfkill learned making season one is the importance of telling a story that’s true to the world of Halo, rather than putting Halo wrapping around a story that isn’t authentic to the source material.

When DQ speaks to Wolfkill, she is back on location in Budapest in pre-production for season two of Halo, which was announced in February this year, before the show’s launch. Now under the stewardship of new showrunner David Wiener (Brave New World), new episodes are set to continue the scale, scope and ambition of a series that turns production up to 11 “on all fronts.”

Filmed on seven soundstages in the Hungarian capital, plus additional locations, Halo: The Series makes use of every aspect of modern television production – from green screen and visual effects to a dazzling array of costumes, set builds and practical effects.

“Our pyro is my favourite part. We try to do as much practically as we can but, at the same time, we’re also very VFX-heavy, not just for the Covenant, where we have a lot of grey-suited actors on stilts with tall eye lines, but also to capture some of those really fantastic sci-fi moments,” Wolfkill says. “We have all of those things, and a lot of it.”

The biggest challenges on set are making the day’s schedule and ensuring a standard of storytelling and visuals that meets those sky-high ambitions. Wolfkill also spends a lot of time thinking about crew dynamics and wellbeing, while she notably held Halo boot camps ahead of season one to introduce every member of the crew to all things Halo.

“Those are things I care very much about – the culture of the crew and what the culture on the set feels like – because that’s so critical to healthy game development,” she explains. When you have a 1,000-person family working 10 or 12 hours a day, things can get crunchy. Something I take really seriously is the functioning of the crew.”

Meanwhile, in addition to Halo and Netflix’s Resident Evil series, the new wave of video game adaptations is building further with another highly anticipated series in the works, The Last of Us. The HBO series is based on the hit PlayStation game of the same name and is set in a dystopian world 20 years after modern civilisation has been destroyed. It is being brought to the screen by Craig Mazin, who previously linked with HBO on renowned historical miniseries Chernobyl.

“We’re definitely seeing a heyday. Maybe we’ll start to see the volume come down a little bit because, right now, it’s ‘take every kind of game and give it a try.’ As people get into it, we’ll start to get back to what are the right kinds of games – and there are so many,” Wolfkill says. “But adapting games is here to stay, for sure. To me, it’s such an interesting creative process. I love games and I also love TV and movies, so it’s just more great content.”