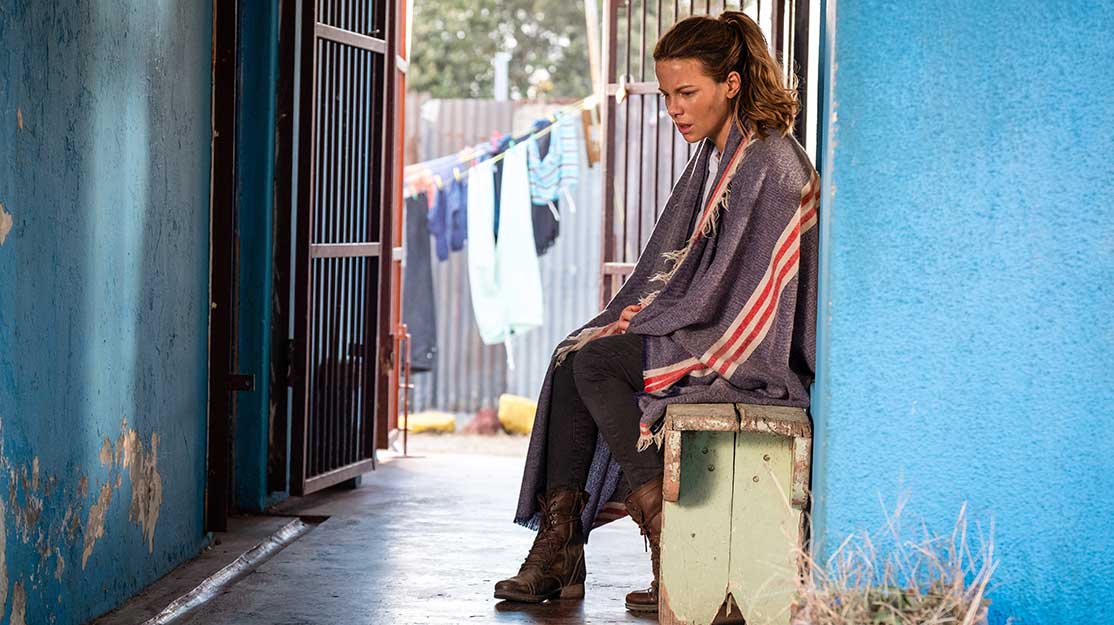 Writer brothers Harry and Jack Williams discuss the origins of The Widow, the globetrotting ITV drama starring Kate Beckinsale in her first TV role in more than two decades.

As is par for the course for a Hollywood actress, much of the media attention around Kate Beckinsale focuses on her romantic relationships.

But in the Underworld star’s new TV drama – her first small-screen project in more than 20 years – it’s the absence of a partner that drives the action.

The Widow focuses on Beckinsale’s Georgia Wells, who has been living as a recluse in the Welsh countryside for three years since her husband Will’s death in a plane crash in the Democratic Republic of Congo.

Everything changes for Georgia when she spots a man with a remarkable resemblance to Will (Matt Le Nevez) in the background of a news report about the troubled African country. Convinced that, somehow, Will is still alive, she returns to DRC capital Kinshasa for the first time since the plane crash, embarking on a quest for truth that takes her down a dangerous and difficult path.

So begins the latest series from Harry and Jack Williams, the writing brothers behind acclaimed dramas such as The Missing (BBC1), Liar (ITV) and, most recently, Baptiste, a spin-off from The Missing. The show is produced by the writers’ prodco Two Brothers Pictures and distributed by All3Media International.

Making its UK debut on ITV last week after being released in its entirety on Amazon elsewhere in March, The Widow first began to take shape following conversations Harry had with his then girlfriend (now his fiancée), herself a widow. “She had actually written a blog about it, and being in that emotional place was something we’d been talking about – so naturally I ended up coming up with a TV drama with that at the heart of it,” he says wryly.

“We thought it was intriguing to start with a character who’s lost someone. And then, putting our mystery and thriller hats on, we thought, ‘What happens if you see that person again, and what does that do to you?’ It felt like there were a lot of stories there and a lot of ideas, which we were keen to embrace.”

The writers had hoped from the off that Beckinsale could be secured as their lead – something that must have seemed a tall order given it had been two decades since her last dabble with TV, in 1998 telemovie Alice Through the Looking Glass. Sam Donovan, a director on The Widow alongside Olly Blackburn, says: “She was nervous about doing eight hours. It’s a lot of work – four feature films back-to-back, essentially.

“We had a lot of rehearsals, we worked with all the other actors together, we did big page-turns, we had chats on the phone. It was the whole kind of skirting round each other before she agreed, before we agreed. We checked each other out, essentially, before we all said yes. But she got it – she got the character, she got the loss and the determination that Georgia has, and she was super excited to get stuck into the eight hours.”

Donovan was one of several members of the team behind Liar who reunited for The Widow, alongside the Williams brothers and producer Eliza Mellor. “Sam directed the second block of Liar,” says Jack. “There are some scenes that you write and you go, ‘This could be awful’ – it’s a good scene but it could, in the wrong hands, be shit. There was a scene where Joanne Froggatt’s character drugs Ioan Gruffudd’s character and kidnaps him, and it was one of those that could have been awful. But it was amazing when we watched it, so we were like, ‘He’s good – let’s get him again.’”

Harry adds: “It looked fantastic, everything he did in Liar, and we were on the same page in this one as well.”

Beckinsale was undoubtedly encouraged by the continuing success other movie actors have found by migrating to the small screen, offering them the opportunity to flesh out a character across several hours of drama. The latest include Richard Gere in BBC series MotherFatherSon and Julia Roberts in Amazon’s Homecoming.

“You can tell proper character stories over a longer period of time,” Harry says of TV drama. “You can really dig into character. For us as writers, we love having eight hours to dig into a story and tell loads of stories, so I suppose the same must apply to actors when they’re looking at roles. People don’t see it as a step down to go and do a TV show.”

Jack adds: “Everyone’s getting spoilt by the amount of good TV. Actors want something to get their teeth into, a proper role to get stuck into.”

Georgia is the latest in a long line of strong, believable female characters written by Jack and Harry Williams. “With her character in particular, it was quite interesting. You see her in Wales, very closed off, very shut off emotionally. Over the first hour, it’s interesting to watch someone face the challenges that she goes through,” says Jack.

“It was a very good character to write but a very hard one to play,” says Harry, praising Beckinsale for both her performance and her stunt work throughout the show, with Donovan describing her as a “one-take wonder” when it comes to action scenes.

The brothers decided to marry their widow starting point with a longstanding aim to place a drama in Africa. “We’d been talking about something set in Africa for a while, something about the Congo,” says Jack. “It’s just a very interesting place to set something. It was lots of different ideas coming together at the right time.”

While the series is fictitious, it touches on many real-life issues facing countries like the DRC, including child soldiers and corruption. Jack also admits true events helped feed the story, but adds: “I can’t fully say what. A lot of it was informed by the Congo as a place – historically why it’s important, why it’s interesting and why the country faces challenges. Some of that has been in the news recently and I think that’s reflected here. There are some specific things that I won’t spoil.

“This story couldn’t happen anywhere else; by the time you get to the end, this is not a story that could have happened in any other country. It’s not an issue-led show, but that’s there and it’s part of the tapestry. Hopefully it’s accurate.”

Harry adds: “There was a lot of research. A lot goes into it.”

Unfortunately, it proved too complicated to actually film in the DRC, so much of the action was shot in South Africa instead, with the globetrotting production also spending time in Wales and the Dutch city of Rotterdam. The latter plays host to a subplot involving experimental treatment for the blind, which promises to tie into The Widow’s complex narrative as the plot develops.

“We’ve done a lot of shows that are very intricate and involved, but this one more than anything. It’s one of those that, when you get to the end, it would bear re-watching,” says Jack, revealing that the writing process for the series took around 18 months.

“Quite often, we’re working it out as we go, but with this one we kind of knew the shape and the arc of the whole thing a little bit more,” adds Harry. “It took a long time, but I really enjoyed it.”

Despite their impressive hit list, the brothers say the way they write together is far from a fine science. “There’s no process or anything,” says Jack. “It’s like making sausages – no one wants to see that; you just want to eat them.”

Harry picks up: “It’s struggling through ideas and thoughts for a really long time and talking about what the story might be, what we want to say, and then interrogating it as much as we can. Once we’ve figured out what the story is, we divide it in half and go away and not look at each other. Then we write our own halves and swap them over. You can kind of rewrite over the other person’s as much as you want.”

The approach often leads to confusion in terms of who has written what in the final script, with Jack admitting he has found himself praising his brother for his own work on more than one occasion. “I turned to Harry after watching something the other day and I was like, ‘That’s so good, that was a great scene,’ and he said, ‘Well, you wrote it,’” he explains. “I did feel quite ashamed but also quite proud of myself, like, ‘Good on me!’”