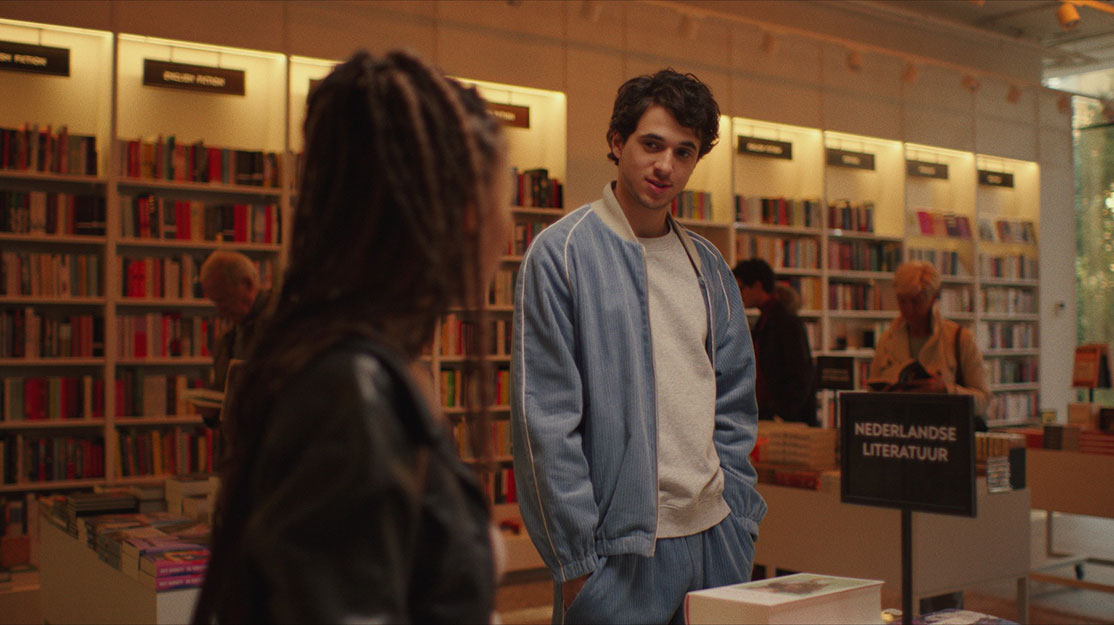 The creative team behind Dutch dramedy Bestseller Boy discuss adapting the eponymous book, which is about a young man’s experience of writing a hit novel, and the US-Netherlands partnership bringing it to the screen.

Based on the novel by literary star Mano Bouzamour, Bestseller Boy is an autobiographical story inspired by the author’s struggles as a Dutch-Moroccan millennial navigating two cultures, overnight success and identity in Amsterdam.

Shahine El-Hamus (De Belofte van Pisa, The Promise of Pisa) plays protagonist Momo Zebbi in the series, which has been created by producer Robert Alberdingk Thijm (A’Dam & Eva) and Bouzamour. It is written by Thijm and Bouzamour and directed by Norbert ter Hall and Sharif Abdel Mawla, with Alon Aranya (Tehran) executive producing alongside Hall and Bouzamour.

The Dutch-language series is produced by CBS Studios and Willy Waltz International in association with Paper Plane Productions for Dutch broadcaster NPO’s Avrotros channel, where the show is expected to debut this autumn. ViacomCBS Global Distribution Group will handle international distribution outside the Netherlands.

Bouzamour was joined by showrunner Thijm, Aranya and Meghan Lyvers, senior VP of international coproductions and development for CBS Studios, when he discussed the series at Content London in December.

Mano Bouzamour’s first novel, De belofte van Pisa (The Promise of Pisa), was based on his own life and became a breakout hit – an experience that would inspire his second novel, Bestseller Boy.
Bouzamour: I was born and raised in Amsterdam. My father and mother migrated to Amsterdam in the 1970s and I have three brothers, three sisters – a big family. When I was growing up, we used to gather around the television, the whole family, to watch movies. I learned a lot about film, storytelling and character development unconsciously.
Fast-forward to when I went to high school, I was the only Moroccan kid at a very elite high school. Those were turbulent but very nice years for me. I learned a lot and when I was 19 years old and got my diploma. All my friends went to university, but I decided to write a novel about my experiences. I wrote every day and worked at a sushi bar. At the age of 22, I published my first novel. It became a hit, was published in German and Spanish and we sold the film rights.
When the book was published, my parents kicked me out of the house. That was very hard for me. I really love them. But they were very religious and they cannot read and write. We had all kinds of families and people in the neighbourhood telling my parents how awful my book was, how explicit the sex scenes were and that it raised doubts of an existence of a god.
I didn’t speak to my parents for three years, and the day we made up was a very emotional moment. I couldn’t sleep for a whole night. Then the next day I had the idea to write about that period [after my book was published]. I went to my publisher and told him, ‘I need to write about what happened to me after my novel came out.’ He said, ‘Great idea. Here’s some money, go and write.’ And that’s the idea behind the series.

However, the lead character in the series, Momo, isn’t based entirely on Bouzamour.
Bouzamour: He thinks and acts like me sometimes, but I fictionalised a lot of stuff together with Robert.

Thijm: The beauty of the novel is it’s so honest. It’s right from the heart and it is so much in Mano’s voice. We did the movie of Mano’s first book and his parents came to the premiere. That was wonderful. For the first time, they could experience the story. When we were doing the show, we really wanted to involve Mano as a writer and executive producer, and it has been really good for the whole voice of the show.

Through his company Paper Plane Productions, exec producer Alon Aranya is always looking for unique stories that can appeal to international audiences.
Aranya: Mano’s story is that kind of story. It’s a unique story but, more than that, it’s a story about what we refer to as ‘a generation of orphans.’ Why? Because Mano represents a lot of sons and daughters of immigrants who don’t really have the right parents to guide them in their new world. We look at them a little bit as orphans in that sense.
But it is also an issue of identity. On the one hand, Mano comes from this background, from this family, from this community. And on the other hand, he has this whole new life and new experience in the Dutch literary world, and it’s this clash between these two worlds that fascinates me. While it’s a Dutch story and it’s an Amsterdam show, the theme resonates all around the world.

Aranya took the idea of adapting Bestseller Boy to CBS Studios’ Meghan Lyvers, who is based in Amsterdam and is looking for projects outside the US that the studio can invest in.
Lyvers: It’s an interesting thing. I live in Amsterdam and I consider myself to be much more of a local than an expat. Certainly, the Netherlands is a smaller creative community [than the US]. Robert is an incredible established showrunner and has worked in that world for a long time and has some beloved series that I’d known were just special, character-driven, incredible stories, but I hadn’t heard Mono’s story.
This story is such a pleasure and delight to support because it does speak to a community globally – not just in the Netherlands – of underrepresented voices. There are not enough shows that speak to people coming up in this generation, so it was, of course, a very easy ‘yes.’
In terms of what we know as storytelling in the Netherlands, there is so much more potential there to mine, and it’s not just these wild stories of people partying in Amsterdam. We know those stories and everyone loves Amsterdam; it’s a popular place for people and it’s a well-known world and environment. But to tell something we haven’t told before with people who are really organically, authentically from those worlds is always exciting.

Aranya has previously adapted Dutch shows for the US, such as Red Widow and Betrayal, and is also working on a remake of Thijm’s series A’dam – E.V.A. He was sitting in Thijm’s apartment in Amsterdam, about to meet Lyvers for dinner, when he was invited to go on a boat ride.
Aranya: We go on the boat and Mano is sitting there. Perhaps I’ve lived in Hollywood for too many years, but I start talking to Mano and he tells me his story, and I’m fascinated. I’m thinking to myself, ‘Robert put me on this boat to meet Mano. I get what’s going on here.’ At the end of it, I realise Bestseller Boy is a TV series. That’s how it was born, out of a beautiful boat ride in the canals. And then we got off that boat and went to dinner with Meghan, and I said to her, ‘You need to hear this.’

Watching Thijm adapt his first novel for the big screen taught Bouzamour plenty of lessons he could use when he contributed to the adaptation of Bestseller Boy.
Bouzamour: As a novelist, you’re the actor, the director and the producer – everything. As a screenwriter, you’re just the screenwriter. For years, I was looking over Robert’s shoulder while he was writing the film script of my first novel. We had a lot of conversations about how scripts were developed. We had a very joyful, intense period of writing during Covid, and we brought a lot of characters up to sharpen Momo’s conflict more. That was a pleasure.
With Meghan and Alon in the team, that was amazing. I always hear their voices while I’m writing these damned sentences. The note calls were amazing and I leared a lot in a short period.

As a showrunner, Thijm says Bouzamour’s story is a fantastic project because the protagonist himself is a storyteller.
Thijm: Every thought from Momo can be put in a scene, so we have this whole surreal world – his imaginary world, his flashbacks, what he writes. Bringing all that into the production, when we were all on the set, we had to pinch each other to make sure it was really happening. It is also thanks to our lead actor, Shahine, who is a very young, brilliant rising star in the Netherlands, and he glues everything together. It’s so organic. I’ve leared so very much. I always had Meghan and Alon at my side during production and that has been a great joy.

With Paper Plane, Aranya has adapted numerous non-English-language series for the US. Now, amid the ongoing streaming boom, he is speaking to producers about making shows together, rather than waiting for remake rights.
Aranya: It’s no longer that world. Sure, there are adaptations as well and I still make those too, but the new game here is actually making the originals. That is the main product here. The first show we did out of that was Tehran [which was picked up by Apple TV+]. The idea was, can we come together with creators and producers locally and bring in our experience in development and production, and what is that going to do to the scripts?
We applied the same approach to Bestseller Boy to really elevate the storytelling, so this show will stand out not only as a Dutch show but way beyond the Netherlands. The idea is to make the show feel very authentic, real and elevated as far as the storytelling goes. When people ask, ‘What’s a great international show?’ my answer is just making a great show will make it a great international show. Bestseller Boy is a great example of that.

Bestseller Boy was developed before it was pitched to NPO, which reinforced the creative team’s desire to make a Dutch-language series that could appeal to viewers around the world.
Lyvers: It was about having clarity of vision in terms of what the show and the identity of the piece was to be, and the voice and the tone of it, and everyone signing on to that creative direction early on, and then being very transparent in meeting the needs of the broadcaster and our needs in terms of looking at it through a slightly different, more international filter.
That’s not to change or dilute the concept, the storytelling or the characters, but to make sure there’s an entry point and a connectivity for audiences who don’t live in the Netherlands or don’t speak Dutch.