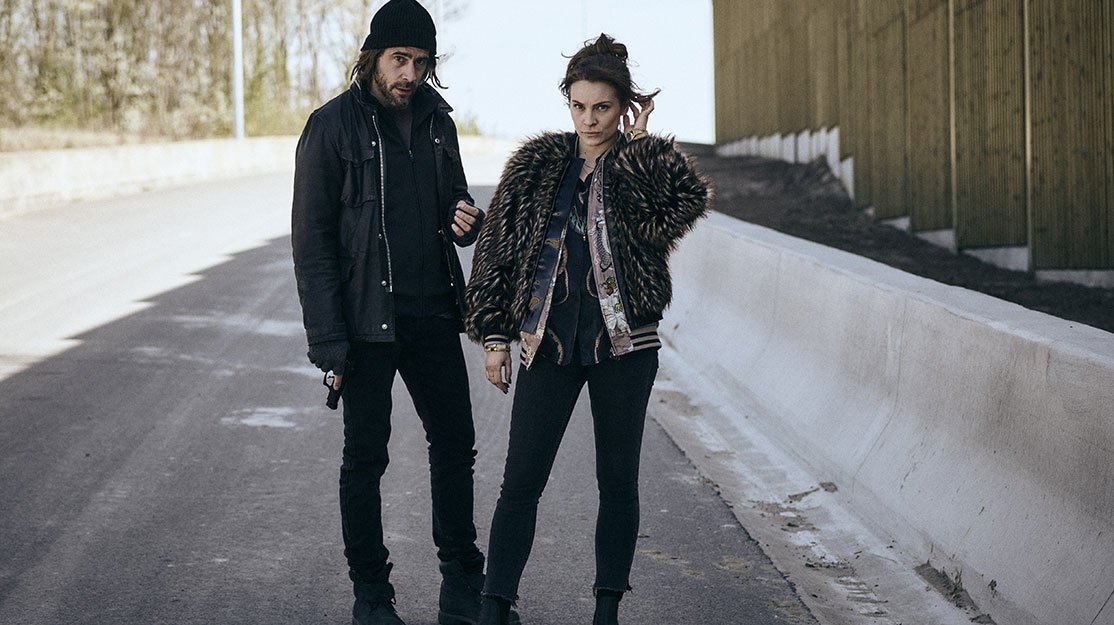 Coming from a background directing commercials and music videos, Amir Chamdin has an ear for a tune. So it’s no surprise that when he started work on his first television drama, the soundtrack played an integral part in shaping its mood, tone and style.

Hassel, based on the novels by Olov Svedelid, tells the story of Roland Hassel, a street-smart detective fighting increased levels of crime in Stockholm. When his mentor, Yngve Ruda, is brutally murdered, he leads a below-the-radar task force to investigate and avenge his death – with consequences for his family.

One of the first meetings Chamdin had with star Ola Rapace (Section Zéro, Farang) was in a music studio where they shared ideas about the soundtrack – provided by Nicke Andersson, the frontman of Swedish rock band The Hellacopters.

“We sat in the studio working out how does Hassel sound, how does the street sound and how does our Stockholm sound?” the director reveals. “To start in that corner, you lay a pretty good foundation for the TV show because you know how it sounds. Then you build your characters. We started in that way so when we were on set we knew who the characters were; we didn’t have to discuss that.

“Then when we were filming, I started with a close-up most of the time to get the acting pure and natural, because the first couple of takes are often magical. When that’s done, I go for the wider takes because then I know it’s more about the scenario than the acting. For many people, that way is upside down, but for our world it really worked.”

Svedelid first introduced Hassel in 1972 novel Anmäld Försvunnen (Reported Missing) and his most recent appearance was in 2004’s Död i Ruta Ett (Death in a Box). The author died in 2008.

The 10-part series, which debuted in September, places Hassel in a brand new story set in contemporary Stockholm. It was created by Henrik Jansson-Schweizer and Morgan Jensen, who wrote the scripts with Björn Paqualin, Charlotte Lesche, Johanna Ginstmark and Oliver Dixon. Hassel is produced by Nice Drama for Nordic SVoD streamer Viaplay and distributed by Beta Film.

“I’ve never done a TV series before. Five or 10 years ago, people were laughing at TV and thought films were the big thing,” says Chamdin, who also has feature films God Willing and Cornelius to his name. “Then TV swept everybody away and now they want to be in TV. Feature films are either art house or really big – there’s nothing in between. But it’s the same as in the 80s, when nobody believed in cinema because TV and video players were taking up all the attention. It’s all cyclical.

“For me to get into TV was more an opportunity because I knew the showrunner [Jansson-Schweizer] and it felt like common ground. TV today is much more cinematic than it was 10 years ago – especially this show, because it’s only one case, it’s character-driven. As a director, you can pay more attention to detail or the characters, so for me it was a really good experience.”

This isn’t the first time Hassel has been dramatised for the screen, with the novels first adapted in the 1980s and 1990s. It’s a series Chamdin remembers, recalling how the police officer and the look of the series stood out from other cop dramas on television at that time.

“He’s not a one-line detective, he’s not pretentious at all,” the director says. “In Sweden, we have a problem that many police officers leave because they think the salaries are really bad. I wanted to portray that. They do so much work but no one really gives them any thanks. Hassel will get the job done. If he crosses the line, who cares? Because the bad guys do all the time and nobody cares.

“He’s a working-class hero. That’s a cliché but we’re portraying it in that way. That led me to build the cop family more realistically. I grew up with [1970s US police series] Baretta and Kojack so it’s a dream to do a crime series, but I didn’t want to fall into the trap of clichés. I tried to treat it in a different way and not focus too much on the action scenes, even though there is action. It’s pretty hard-boiled.”

Chamdin describes an “organic” shooting practice on set in which he shoots the action with long lenses, with the aim of following the actors instead of leading them. “It’s a mix between shooting it very much 70s-style with long lenses or handheld and up close, so you get more of a spaghetti western feel to it. [It’s not] the Scandi noir thing where everything is very perfect and clean – this is more gritty and the look of it is not cold and blue. I went for a warmer colour scheme, so it’s more about the reds and the greens. Almost all the Scandinavian series are blue for some reason, I don’t know why. I’m more into the warm colours and I think that shows more of the truth of Stockholm.”

The director also found that his background in music videos and commercials meant he well suited to the faster nature of television shoots compared with feature films.

“If you need more than three takes, something is wrong with the script, the actor or I haven’t done my job preparing it as a director beforehand,” he asserts. “So everything is in the preparation and understanding how long a scene will take. You really learn that from music videos and commercials because you’re on the clock. I don’t get stressed if it’s late in the day because I know how much time I need. That’s why it’s so important you’re well prepared and know what you want. That has helped me.”

Chamdin directs six episodes – the first four plus episodes seven and eight – and says he had loved exploring television, which he describes as a new world. “I love this format and it’s so accessible for everybody,” he concludes. “I’m so glad I can do this – if it’s film on the big screen, lovely; if it’s TV, great. It doesn’t really matter as long as you can do the craftsmanship. It’s a magic world.”