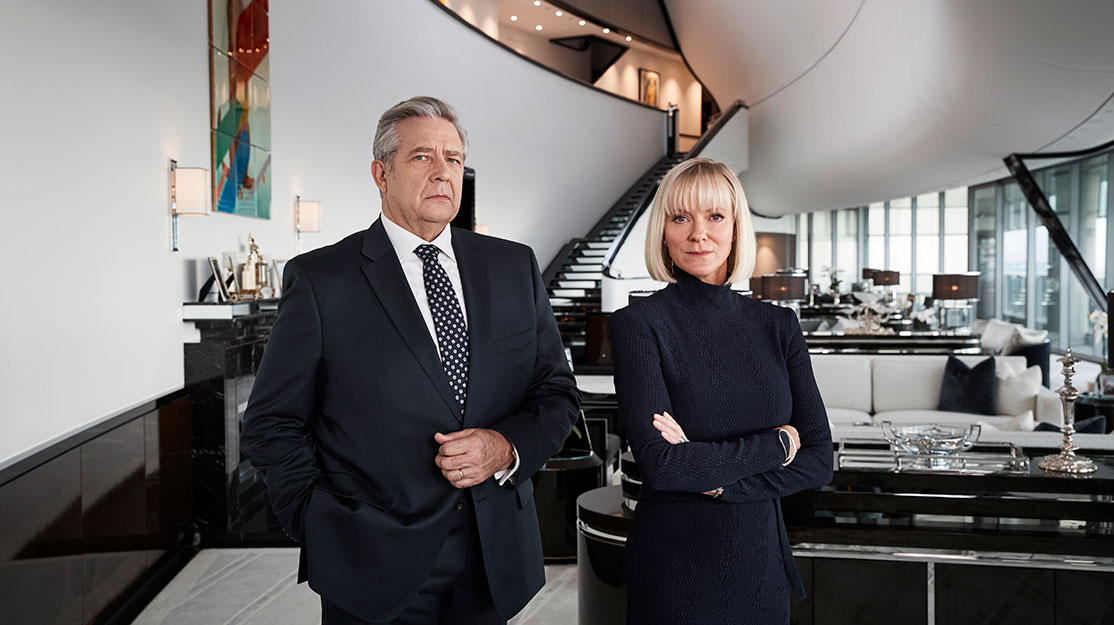 Cold Feet star Hermione Norris tells DQ why she travelled around the world to join the cast of Australian drama Between Two Worlds, a complex melodrama that creator Bevan Lee describes as his best work yet.

It sounds like hyperbole, particularly coming from a writer who has created long-running series such as Back to the Rafters and A Place to Call Home, but when Bevan Lee says his latest drama, Between Two Worlds, is “categorically the best thing I’ve ever done” and then repeats that claim several more times, you know he means it.

If this is the final project in his 40-year career, Lee – whose other writing credits include Prisoner: Cell Block H, Sons & Daughters and Home & Away – says he’ll be happy to go out on a high point. “It is without a shadow of a doubt the best thing I’ve done,” the Australian says again, adding that Between Two Worlds is also the “most complex narrative I’ve ever done.” It blends the two staples of his career: an optimistic suburban family drama like Back to the Rafters with the type of rich emotional melodrama seen in A Place to Call Home.

“I’ve done a mash-up of the two forms and that’s what is most interesting about it,” Lee tells DQ. “I wanted to start two completely different shows in the same hour of television and then, as it goes on, because of certain things that happen between these two utterly unconnected and unrelated worlds, have them slowly merge. The show is very compelling and surprising, and it frequently pulls the rug out from under your feet. These two worlds have no reason to have anything to do with each other but, slowly and surely, they become one world. It is everything I’ve done before but done in a different way than I’ve ever done it before.”

Produced by Seven Studios for Australia’s Seven Network and distributed by Entertainment One, Between Two Worlds is pitched as an intense, high-stakes drama about two disparate and disconnected worlds. The first revolves around Cate Walford, played by British actor Hermione Norris (Cold Feet, Luther).

Cate’s relationship with vicious, wealthy business tycoon husband Phillip (Philip Quast, Picnic at Hanging Rock) is on the ropes and her tempestuous home life is trapped in a tangled web of lies and manipulation. Through a shocking twist of fate, this dark and murky world collides with that of widow Sophia Grey (Sara Wiseman, A Place to Call Home), her football star son Danny (Alex Cubis) and her musical daughter Bella (Megan Smart).

Creator Lee, who writes nine of the 10 episodes, says he had two choices “at my age”: put his feet up and retire or “mix it up.” He continues: “Our life is a mishmash of conventions. What I wanted to do with this show is take two conventions, two worlds, and see how both stories affect each other. It was a really interesting experiment. I guess it was a homage to the two forms that have earned me a living for 40 years.”

Those two worlds are clearly defined in episode one. On one side is the toxic relationship between Cate and Phillip, which is juxtaposed with the warm and loving family life of Sophia, Danny and Bella. Confident the show will keep viewers guessing, Lee challenges anyone to watch the series and successfully predict how events might play out over the next 10 hours. It’s a bet he’s more than likely to win, considering the unusual narrative structure he utilises. It involves cliffhangers at the end of each episode that are then replayed from a different perspective at the start of the next episode, revealing information that turns events on their head. He also throws in flashbacks to further confound audiences.

“It’s compelling,” he asserts. “I loved giving scripts to people as I wrote them, because I loved watching them go, ‘Oh my God!’ It’s a great thrill for an author when you surprise people, and this show does twist and turn and surprise as it goes along.”

The series has had a long gestation period over four years, Lee says, with the world of Cate and Phillip coming to him very clearly. The Danny storyline was originally much darker, however, and embodied a “scabrous” attack on television talent shows.

“When you combined it with the Phillip and Cate story, there was a really unpleasant aftertaste, so I jettisoned that and brought in the new story of Sophia and Danny, which is a world that, almost in its own way, is too good to be true,” he says.

“Phillip’s world is so toxic at the beginning and, as the show goes on, you realise there are depths and layers that let you forgive that toxicity. Sophia and Danny’s world is almost too cute for words but, as with so many suburban families, it’s all about denial and years of sweeping dirt under the rug so you don’t have to see it in the living room. But it was still a nicer world to come into. Slowly, the elements came together, but it was an interesting journey to find those separate worlds. The rest is just that weird alchemy that gives you the characters and you don’t know why or how or whatever, they just come to you. That is some sort of magic.”

What’s clear from the opening episode is that the series, which debuts in Australia this Sunday, will rattle along at a fair pace, with plenty of twists and turns packed into the first hour, which also sets up the characters and their relationships. It’s also obvious the show won’t slow down.

“I wanted to write a piece where it doesn’t stop to take prisoners,” Lee says. “It does rip along. I wanted to challenge myself and see if I could pull off such a twisty, turny driven narrative, the sort of narrative I really like if I watch a show. I certainly don’t think it sacrifices any depth or character examination to narrative pace. As we go on, we backfill some of the stuff you missed. It’s actually quite a complex show, structurally. It’s certainly not a purely linear narrative by any means, and there are lots of flashbacks and re-examining of material.

“You’ll see stuff in the first episode and then, in episode three, you’ll see exactly the same thing but from a completely different angle, and you’ll realise what you thought you saw in episode one is not what was going on. It’s that sort of show. That’s one of the reasons I had to write so many of them myself; the narrative threads are so complex, you have to hold them in one hand, otherwise it becomes plot spaghetti.”

A running theme of the series is damage, and how it doesn’t excuse people’s mistakes but does make them more understandable. This leads the characters to either face the world head-on or hide away to protect themselves, meaning no one can be taken entirely at face value.

“Cate, played gloriously by Hermione Norris, is this borderline alcoholic, adulteress ice queen who has this toxic relationship with Phillip, but nobody will guess why until it’s ultimately revealed,” Lee teases. “ You realise the real Cate has got nothing to do with this woman we’ve seen in the first hour. The story goes behind the masks of all these people to see the damage that is the fuel for their behaviour patterns and outer shell. That’s the most interesting thing to write. There’s the duality of the version of ourself we present to the world and the version that is true. That is ultimately the two worlds the show is about.”

Lee admits Norris didn’t initially fit the version of Cate he had imagined when he wrote the scripts. But after speaking to her about the show, he was bowled over by how Norris elevated the character and made her better than he had on the page.

“I can’t remember what my version of her was anymore because she came in and overwrote it and made it better,” Lee says. “That is so exciting; she’s a lovely lady and I have the most enormous admiration for her. She can do more with one quiet look than I can write in a whole page of motivational description for the character. She can flick an eyelid and get it all. She’s fabulous.”

Norris, who previously worked down under 20 years ago for an episode of Cold Feet, says Lee’s infectious passion and enthusiasm inspired her to join Between Two Worlds. She’s also the latest British actor to join an Australian series, following in the footsteps of Downton Abbey alums Joanne Froggatt and Laura Carmichael, who have starred in The Commons and The Secrets She Keeps, respectively.

Norris spent five months in Sydney filming the show, which she says doesn’t pull any punches. “It goes everywhere and anywhere,” the actor says. “Bevan’s not frightened by turning things on their head. I’ve never read a script where there are so many threads in a story. It’s two worlds that are completely separate, so I don’t really cross over into the other world. It’s a very slow burn of what will be revealed, but when it is revealed, it’s very surprising.”

Norris describes Cate as a prisoner of Phillip and a prisoner of great wealth, “which sounds a contradiction but I think she’s a prisoner of that life and predominantly a prisoner of her own secrets and what she’s trying to protect. She’s totally held captive by Phillip.

Back in the UK, Norris says she had forged lifelong friends with the “open-hearted, generous people” with whom she worked on the show. “Those people I’ve met with cast and crew will stay with me,” she adds. “People become part of the fabric of your life and I met some people who were real diamonds, and that’s what I’ll take away from it. It’s always the people you work with.”

Lee believes audiences will relate to the journeys of discovery the characters go through, if not the characters themselves. While Sophia’s perfect facade begins to show the cracks beneath, Phillip and Cate emerge from a “toxic pit” and spend 10 hours “having a shower to wash off the sludge and see whether anything left underneath is worth touching,” the writer remarks.

“In different ways, they all go on their journey of self-realisation. That’s the whole duality and I would like the show to encourage people to work on yourself. It can be pretty painful but can bring its own benefits.”

Hopeful that the show will become a long-running drama, Lee re-emphasises the fact that, like the characters, Between Two Worlds is not the show it might appear to be.