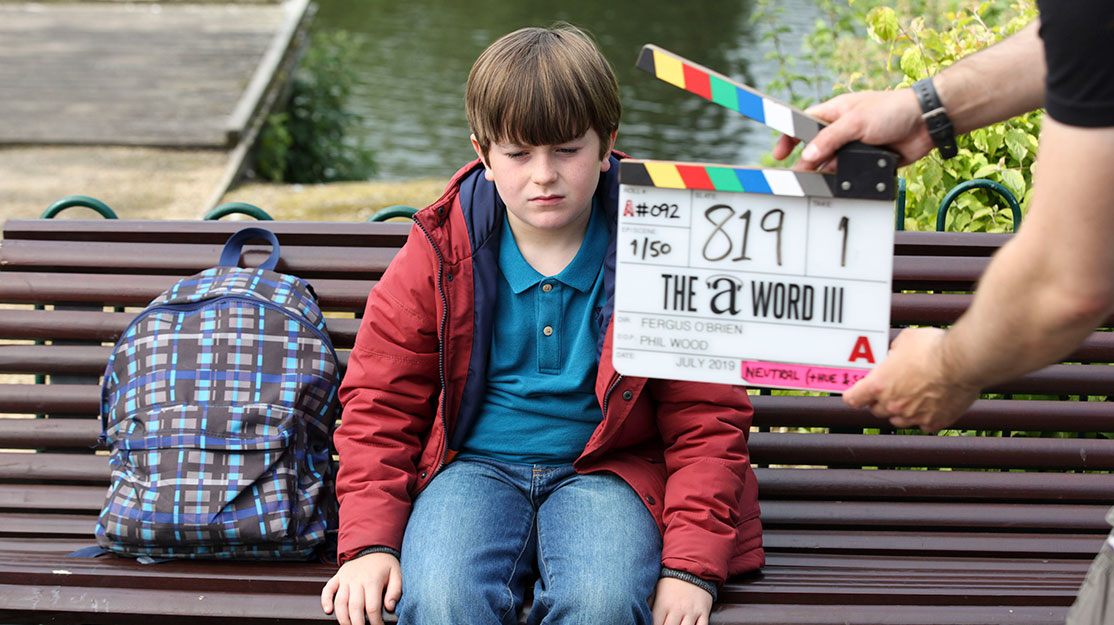 Word to the wise

Peter Bowker, creator and writer of The A Word, and director Fergus O’Brien discuss making the third season of the BBC family drama and their joy at pushing sidelined characters and stories of disability into the limelight.

Delivered to the BBC at the end of November last year, there was no risk of the third season of family drama The A Word falling foul of the production shutdown that has hampered numerous series around the world as a result of the coronavirus pandemic.

Other projects for creator and writer Peter Bowker and lead director Fergus O’Brien haven’t been so lucky, however. Bowker is currently writing the second season of ITV’s World on Fire, which was due to start filming in September but he now expects that to be pushed back, with leading actor Jonah Hauer-King currently mid-way through the production of Disney’s live-action movie Little Mermaid.

“It starts to get complicated because they also wanted to film the first block in Spain, which doesn’t help. But I am actually writing,” Bowker tells DQ. “The one bit of certainty they’re trying to cling on to is that they will have all the scripts before they start because they want to schedule it. Availability might mean it will have to be one of those incredible jigsaws.”

Writing World on Fire, which is locked in the past, means he isn’t troubled by questions about whether he should refer to Covid-19. But for crime dramas, “all the alibis for this period of time will stack up because they’ll say, ‘I was in the house for six months.’ So every series will have to factor in a six-month spell where nobody committed crime,” he remarks. “I’m also writing a romantic comedy and there’s references to the past in it all the time and I keep thinking, ‘I’m writing something in the future and I don’t know what it’s going to be.’ Who knows?”

Meanwhile, O’Brien was due to film a block of the second season of another BBC drama, historical series Gentleman Jack, although he is now doubtful that will take place at all this year. He has, instead, returned to his documentary roots to help develop a programme charting the UK’s entire response to the pandemic.

“It’s going to be really interesting,” he says. “There’s quite a lot to keep in your head because it’s quite strict about what you can get out there and film and UGC [user-generated content], which is quite in vogue at the moment, is pretty unsatisfying.”

For now, there are no such worries for The A Word, which has won critical and audience acclaim since it first aired in 2016. Based on Israeli drama Yellow Peppers, it follows the Hughes family in the Lake District, where they are struggling to raise youngest son Joe (Max Vento), who is diagnosed with autism. Now, two years on from season two, Joe is 10 and living in two places at once following the divorce of his parents Alison (Morven Christie) and Paul (Lee Ingleby).

“It’s one of the few times the writer says, ‘I’m really glad it’s been such a long gap between seasons’ and actually means it because what it allowed us to do was move the family all into a new phase,” Bowker says of the central family, which has splintered in several directions. “Joe is now that little bit older. His next phase would be puberty, so that creates new challenges and new issues around it. Alison’s in Manchester, Paul’s in the Lakes still. We’ve got a family that’s split into two different places and a child with autism to deal with.”

Produced by Fifty Fathoms and Keshet UK, The A Word doesn’t just focus on the central members of the family but enjoys the company of other figures, such as Alison’s brother Eddie (Greg McHugh), their father Maurice (Christopher Eccleston) and Eddie’s wife Nicola (Vinette Robinson). Bowker says a big change in season three is how the drama has begun to widen its focus further on to these characters and others with disabilities, such as Mark (Travis Smith), the son of Sophie, who works at Paul’s pub.

“The second episode is really Mark’s episode with Paul, which Fergus filmed, where Travis declares his intention to try to join the army and it becomes a story about the responsibility of those trying to encourage somebody with a disability to fulfil their potential and where you draw the line by saying, ‘That’s unrealistic’ and where you say, ‘Let that person try and fail,’ and how you then deal with that. It’s a bit of a road movie, too,” Bowker says.

Distributed by Keshet International, season three sees new cast members including Julie Hesmondhalgh (Broadchurch), David Gyasi (Troy: Fall of a City) and Sarah Gordy (Call The Midwife), with Bowker calling the introduction of Gordy, who has Down’s syndrome, as one of the “joys” of the series as her character, Katie, embarks on a relationship with Ralph (Leon Harrop), who also has Down’s.

“It’s a story about a young couple trying to break away from their parents and make their way in the world,” Bowker explains. “It’s a rite of passage we’ve seen before and it’s doing that through the filter of the fact they have Down’s syndrome. I’ve tried to always flip the expectations so that it’s often about the young people with learning disabilities managing their parents’ expectations, rather than the other way around.

“Chris Eccleston gives a kind of bravura performance throughout the whole thing but his relationship with Leon and his onscreen chemistry with the Ralph character makes them just this great double act.”

Ralph and Katie share just one of the blossoming romances this season, alongside Alison and new character Ben (Gyasi) and between Paul and Sarah (Gemma Paige North), the neurotic parent of Bill, a child who has hearing difficulties. “It’s very sweet,” Bowker notes, “because I created this character of Sarah as the butt of everybody’s jokes in two seasons, so the luxury of having a third season means you can suddenly flip it and Paul sees something in her he hasn’t seen before. It’s that classic one where in the [school] sixth form you’ve spent all this time taking the piss out of this girl and then you end up going out with her.”

Sarah’s evolution through the series is one that Bowker has been able to complete with a third season of The A Word, as he has been able to play with his ensemble of characters and subvert viewers’ expectations of them along the way.

“We know what Morris’s reaction is going to be to something. We expect him to be either blundering or have a use of language that’s incredibly insensitive, and sometimes it’s nice to fight that and he shows himself to be remarkably sensitive, but you know you’re surprising the audience,” he explains. “The joy for me [this season] was running with the Ralph and Morris relationship, which we’d seen something of almost by accident in season two.

“With Joe, he is more verbal than he was, he has more speech, but he often uses that speech in a way to still keep the world at arm’s length, and that’s far more challenging for Max, the actor. When I look now at what a baby he was in the first season, it’s quite a shock to me. Everything was instinctive and you just had to play with that. Fergus is probably the first director who’s been in a director-actor relationship with him. He would ask questions, you would explain things, whereas before it was often a case of working round Max’s instincts. He’s great. He grew as an actor before your very eyes.”

“He’s an extraordinary talent,” agrees O’Brien, who had watched the first two seasons and then rewatched them while preparing to shoot season three. “The difference with him this time was he really responded to being treated like an actor and to being talked to about what he thought his character would do in that situation and giving him that status as somebody who knew his character probably better than a lot of people. He really rose to that. Max just seems to have an instinct. He would know where to be, what to bring to his face and what to do with his hands in a really interesting way and brought truth to what he was doing.”

Coming from a documentary background and fact-based dramas such as Mother’s Day and Against The Law, the director says he was mindful of respecting the style of the series, harnessing the power of the Lake District setting and finding a visual rhythm to Bowker’s writing. “Things would slow down when they needed to slow down and be still so you could really be in an emotional moment, or if it was something that deserved to have more movement and more energy, then we would bring that,” he says. “It was just working to the undulation and the writing. That’s all I wanted to try and amplify a bit more if I could.”

That rhythm is affected by Joe’s increasing self-empowerment. In season one, he is somebody that things happen to and decisions made about. Now events play out from Joe’s point of view, meaning the show and the show’s “grammar” both moved forward this season.

O’Brien says his aim was to acknowledge Joe and make it clear he was now seeing and hearing what was going on around him, even if he wasn’t responding in the moment. “Even to just let the audience be party to wondering what that might be felt like an extra element I could bring to it.”

Bowker is rightly proud of writing a mainstream drama that shines a light on people and stories that are usually marginalised on television. “That’s the thing that’s most joyous for me,” he concludes. “And from Lee, Morven, Chris and Pooky [Quesnel, who plays Ralph’s mother Louise], the support the cast lend to this can’t be underestimated. My experience with actors is they’re incredibly hardworking, incredibly accommodating and when they’re responding to work they appreciate, they’re second to none in adjusting and adapting.

“Another joy was having two actors like Julie and David come in, own it and become part of the A Word family, because I like to write about families that are unconventional and find a way of being and are legitimate.”