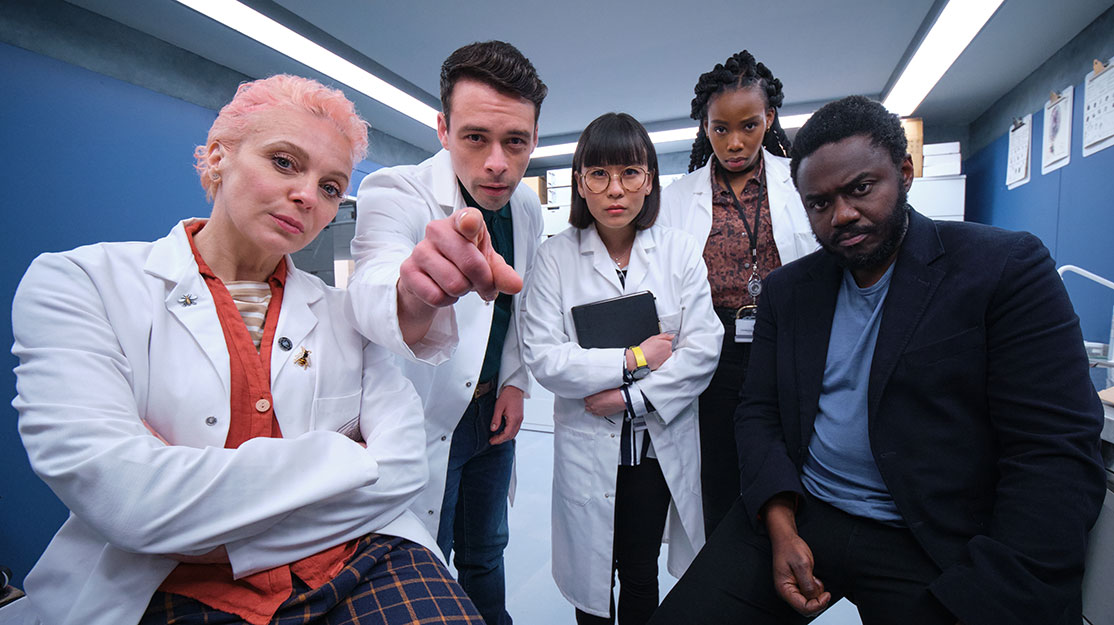 Wolfe at the door

Shameless and No Offence creator and writer Paul Abbott tells DQ about his latest series, darkly funny forensic crime drama Wolfe, and how he created the unique character at the heart of the show.

In the first episode of Sky Max crime drama Wolfe, a woman rushes to the food processing plant where her husband works, unaware he has met an extremely gruesome death after falling headfirst into a deboning machine.

As she looks for someone to help her uncover the details of his accident, she approaches two forensics officers wearing full-body overalls and carrying buckets filled with his bloody remains.

Paul Abbott, the creator and writer of the series, speaks through a characteristic roar of laughter as he recalls the scene. “They’ve finished picking bits out of the meat machine, good old Ted, and his wife comes up saying, ‘My husband, I don’t know where he is,’ and he’s in the bucket,” he says. “It’s a cheap gag but we just get away with it. We’re allowed a bit of theatricality on that stuff.”

The scene stands out as a perfect example of Wolfe’s mix of darkly funny humour and the type of unique and unconventional crimes – and crime scenes – the title character and his team are sent to investigate during the six-part series, which begins this Friday with the hunt for Ted’s killer.

But while Wolfe is brilliant at work, his home life is more problematic as he tries to hold together his relationship with his ex-wife Val (Natalie Tena) for the sake of their daughter. Matters are complicated further by Wolfe’s bipolar disorder.

Described as a fresh and unfiltered take on the traditional crime drama, the series comes from Abbott, the Bafta- and Emmy-winning writer best known for political thriller State of Play, council estate-set comedy drama Shameless and No Offence. It was the latter series, a police comedy drama set in Manchester, that provided the catalyst for Abbott to pen Wolfe, though he says the two shows operate at different frequencies.

“The amount we got away with on No Offence… you’d expect coppers and lawyers to hate it because we spoke their minds in a way they couldn’t. We were their mascots,” he tells DQ of the show, which ended with its third season in 2018. “That drove me to Wolfe because I love real forensic shows and it’s what I want to write.”

Abbott says there’s “no shame” in writers being motivated solely by a desire to create a show they would like to watch themselves, and believes trying to write a series to fill an apparent gap in the market isn’t always the best way to start a new project. “Many times I’ve gone down that route and it becomes perverse. You think, ‘There’s a reason people haven’t done this,’ and you’re running a million miles backwards. But out of petulance or I don’t know what it is, I go, ‘I bet I could,’ and a year later you’re like, ‘You know what, do you want your money back?’”

Like Wolfe, Abbott is bipolar – he is a patron of charity Bipolar UK – and he says the condition is one he wanted to address in the series without putting it front and centre of the story, and hardly even mentioning it directly.

“I wanted to use the bipolar thing out of respect to the fact it’s still not talked about, but you can’t do it with a sledgehammer,” he says. “I wanted to do it in a smart way, and also in an entertaining way to make it digestible, but without lies. You can exaggerate, you can tilt it, but you can’t tell lies. We do say it a couple of times, but it was originally said a lot more and we stripped it right out because when simple things are done, you understand it.”

When he does encounter his extreme mood swings, Wolfe can count on his friends and colleagues to rally round him. Abbott was keen to give his leading character a close support network akin to a family, with individual members willing and able to take charge in his professional life when necessary.

“The minute he starts to go manic, the first thing they do is mop around him like his parents, and they know there’s a big spark going to come out. This is part of the voltage I wanted to throw behind [the show],” he says. “Since I learned to write, and write better and better, if I get manic, it’s like a vortex, a funnel. You’re being sucked into it and it’s good and bad. Once you can write people really well, you don’t have to be yourself. You don’t have to have a go at yourself with that kind of electricity. You invent people – and you get paid for it on top! The better you get at writing, the more of a distraction it is from the toxic version of that thing, and you weaponise what used to be a shocking enemy.”

Abbott says that although people are not aware of themselves at the start of a manic phase, he wanted to convey that to the audience without making it too explicit. “‘Singing in the rain’ is what they call it,” he says. “You want to make that felt, not said, and I think we have. Wolfe’s magical in his own space, and they’re all running around him like chickens. It’s not to watch him fall, it’s because he might. Often he does come out alright, but his work might need checking because it needs to be admissible in court, so they’re behaving like supervisory parents.”

Those relationships with his colleagues – the “connective glue” that keeps the characters together – have an easy camaraderie about them, which also helps the show avoid getting bogged down in overly scientific dialogue, which “bores me shitless,” Abbott jokes. “There’s so much room for sparkle in such a short space of time, we can do magical stuff. That’s what I hope we keep on doing. I’m really proud of it. It’s a really well-baked cake. Everything we wanted it to be, it’s come out like.”

Produced by the writer’s AbbottVision in association with Sky Studios, with NBCUniversal Global Distribution handling international sales, Wolfe combines a serial storyline featuring Dominique alongside a standalone story in each of the six episodes.

“Audiences like a serial story,” Abbott says, “but they’re a bit boring because they get in the way of a good story-of-the-week. But if you let it bleed into the story, it registers.” The aim was then to draw viewers into a world where they didn’t mind who the camera would be focused on as they would still get an insight into the whole story, from the forensics to a tale of unrequited love. “Val’s never going to stop loving Wolfe,” the writer notes, “but she can’t stick him for longer than 20 minutes. It’s sad, it’s funny and he knows when to give up – he just doesn’t.”

Inside the writers room, a one-page outline was constructed for the serial story, which could then be blended with episodic stories that writers would bring to the table. Abbott was keen to ensure each script was in the writer’s individual voice, though they worked closely together to ensure story or character points weren’t repeated.

“Because we’ve only got six episodes, we can afford to go, ‘What’s interesting?’” he notes. “You’re always thinking of the audience. There’s a lot of inevitability about telling a forensics story, so you’ve got to be inventive about the way you do it. We’ve got to play with it.”

Abbott met with star Ceesay via Zoom during the early stages of the pandemic. He could have gone to auditions in person, the show’s base being a short distance from the writer’s Manchester home, “but everything had been said. He got it,” he says of the actor. “You can smell his [Wolfe’s] history because [Babou’s] Gambian accent’s still there. And once he makes you laugh, we’re quids in. Somebody said on Twitter, ‘Oh, Paul Abbott’s new drama? Tell him there are white actors, you know.’ I know – that’s all I fucking work with. Did you watch Shameless?”

Working with directors Adrian Shergold (Mad Dogs) and Sean Spencer (Panic) was “brilliant – I couldn’t direct urine,” Abbott jokes. Commenting on the show’s walk-and-talks and the circular movements of the camera, he adds: “It has an elegance to it that’s hard to shoot. But we found a way of capturing it.”

The production team also worked with forensic science experts from the University of Lancaster to ensure the show is somewhat grounded in reality, even if some of Abbott’s initial ideas proved to be too outlandish.

“They go, ‘It’ll never happen,’ but when they see I’m not going away, they say, ‘Well, you might get away with this…’ We sent teams to watch what they do, and they do it in a much more rudimentary way than our 21st century set.”

With studio space unavailable, the show’s forensic labs were constructed inside a potato barn, while the production also had its own Covid testing facilities to enable frequent testing of cast and crew.

“We had the most dextrous team I can ever remember because anything you had to do, you had to do it in the time you were given because of Covid,” Abbott says. “I do think there’s going to be a residual effect from this [in the industry] because people have never been so generous to each other and helpful, as we know we’ve got to make it work — no snapping, no spiking, no shit-stirring. It was a really good atmosphere to shoot in.”

That atmosphere certainly translates to the screen, with Wolfe at the head of a cast of characters who have an effortless charm despite some of the grisly discoveries they make along the way. With all episodes of the series launching this Friday on Sky Max and streaming service Now, work is now already underway to continue his story in a potential second season.

“I don’t think he’ll ever be predictable and he’ll never be disappointing. He’s never going to be dull,” Abbott says. “That’s your perfect houseguest. But his wife would say, ‘Only for 20 minutes.’”