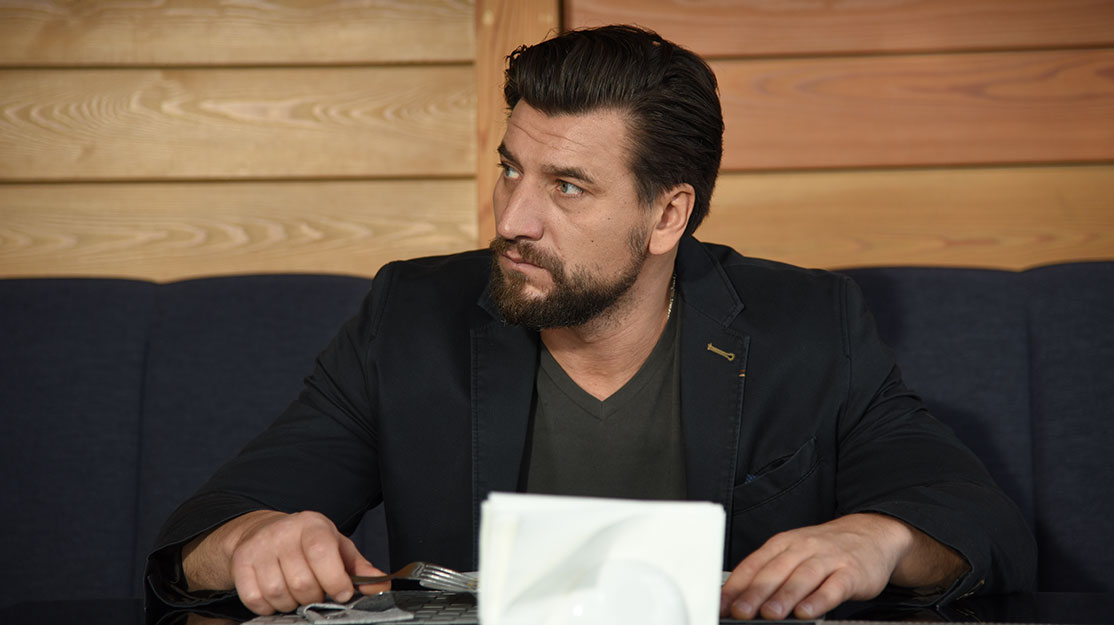 Wolf at the door

Writer and director Denis Karyshev introduces Russian drama Wolf Trap, in which a gangster seeks revenge for his parents’ death by taking on the crime bosses now running his hometown.

A violent gangster looks to change his ways and protect his hometown from a new wave of criminals in pulsating action thriller Wolf Trap, which comes from Russian broadcaster NTV.

Produced by KIT Film Studio and distributed by NTV, the 16-part series begins when notorious gangster Artyom Volkov (Wolf) fakes his own death and retires overseas under a new identity.

When his parents die in a car accident 20 years later, he secretly returns to his hometown. There he discovers that a local mobster’s nephew was responsible for his parents’ death. In the subsequent battle between Wolf and local crime bosses, it becomes clear that for him to survive, Wolf must take back his town from criminals.

The series is directed by Denis Karyshev and Vyacheslav Kirillov, who also write alongside Rodion Beletsky, Alexander Turbin, Anna Grafkova and Valeria Podorozhnova. The producers are Janik Faysiev and Rafael Minasbekyan.

The only Russian project to be featured at this year’s MipTV Drama Buyer’s Summit, Wolf Trap was recently showcased during Roskino’s Key Buyers Event, the first Russian virtual content market, which brought together Russian producers with buyers from around the world.

Here, Karyshev introduces the series and talks about his showrunning role, the constant time pressures he faced in production and battling with zombies.

How would you describe the story of Wolf Trap?
Back in the 1990s, Artyom Volkov used to be a mob boss with lots of enemies. There was an assassination attempt on him. Everyone thought he was dead, and he was even officially buried, but in reality the coffin they put in the ground was empty. Artyom faked his death to throw his enemies off his trail.
With a new name and a new face, he started from scratch in Sweden, where it was quiet and safe. But 20 years later, the unexpected death of his parents forces him to resurface. He goes back to the city of his birth for the funeral and finds himself in the middle of a gang war. He realises he can’t erase his past mistakes, but he can try to change something in the present. So he stays home to protect his sister from the danger that looms over her and take on an entire crime syndicate all by himself.

Does Russia have a history of mob dramas? How does Wolf Trap fit into the genre?
Twenty-five years ago, you could watch a mob drama if you just looked out of your window. The 1990s are enshrined in modern Russian history as the years when crime ran rampant. Of course, our movies reflected that. On the one hand, Wolf Trap builds on the Russian crime drama tradition, which includes shows like Brother and The Law of the Lawless.
On the other hand, we’ve had no choice but to draw from modern foreign shows such as Banshee, Peaky Blinders and The Punisher. The main difference between these two traditions is that the Russian audience is not in any way partial to a comic book style of show. Any attempt to introduce larger-than-life events or characters is going to make them feel mistrustful. Our audience is used to the criminal dramas that go on right outside their windows.

What are the origins of the project and how was it developed?
I told the story to Timur Weinstein, NTV’s general producer, and he liked it. Then Aleksandr Ustyugov, who plays Wolf, came on board. You can’t really think of another Russian actor that would be better in the part. Beside the fact that he’s a star, he’s also perfect for the character we imagined. After that, nothing could stop the train.

How would you describe the writing process?
We were working on the script according to the generally established method. I was the showrunner and the leading scriptwriter. I was responsible for the main storyline, i.e. I was the person who OK’d – or didn’t – major plot developments that other writers suggested. That was how we wrote 16 episodes of the first season together.

What were the themes you wanted to discuss through the story?
I wanted to make a gritty, brutal and realistic fairy tale for grown-ups. I think we achieved that.

What were the advantages of you and fellow director Vyacheslav Kirillov being among the writers?
I wouldn’t say it was exactly an advantage. When I invited Vyacheslav Kirillov to write our screenplay, I already knew he was one of the show’s directors. So, before writing something down, he had to imagine that thing and test it in his head from a cinematic point of view. That definitely made the literary screenplay closer to the reality of film production. If all screenwriters had little directors inside them, that would be perfect.

Where was Wolf Trap filmed and how are locations used in the series?
Aninsk is a made-up city. It’s our version of Gotham City, reminiscent of multiple real Russian cities. If you observe the comings and goings there, you would be able to imagine life in some far-out Russian cities. Aninsk is a composite image. We shot in Moscow and five other cities.

What were the biggest challenges you faced and how did you overcome them?
The main challenge of Russian showrunning is the race against time. You’re terminally out of time, especially when it comes to action, stunts and car chases. It’s like we were always looking at the stopwatch. You could say we were working as a Formula One pit stop crew.

What were the most memorable scenes to film and why?
That was our last production day. We went to the location, but there was already another crew there. It was a public space, so we were all on equal footing. We had to make it work by communicating. We had to shoot all day by taking turns. One director would signal action and, for that time, the other crew had to keep completely still. Then the other crew would start shooting. To an outside observer, that all looked weird. There was a love scene that we were shooting while, 60 feet away, the other team was doing a violent zombie fight. I will never forget that.

What should viewers expect from watching the series?
I would love to make the audience empathise with our characters. We made a show with a lot of emotions and it would be great to share them from the screen. I think every movie is, in the end, about love. Wolf Trap definitely is.

Why might Wolf Trap appeal to international audiences?
The genre shows are the most universal ones. People living on different continents are able to understand them without much difficulty. On the one hand, Wolf Trap is a crime drama made according to all the genre conventions; on the other, it’s full of uniquely Russian things. That combination of familiar form and exotic content would be very attractive to international audiences.

How is Russian drama evolving at home and overseas?
Until recently, the movie industry in Russia was mostly domestically oriented. That’s now starting to gradually change. The producers want their products to be interesting not only to the domestic audiences but to the foreign ones. I’m all for that. I think I’m making shows that foreign viewers can understand and relate to.

What are you working on next?
At the moment, I have my next show, Hitman, in pre-production. It’s a story about a hitman who loses his memory in a car crash. I’m also already writing screenplays for the second season of Wolf Trap. The first season was aired to a lot of success and generated a lot of interest internationally. It was the only show from Russia listed at the prestigious MipTV Drama Buyers Summit programme.