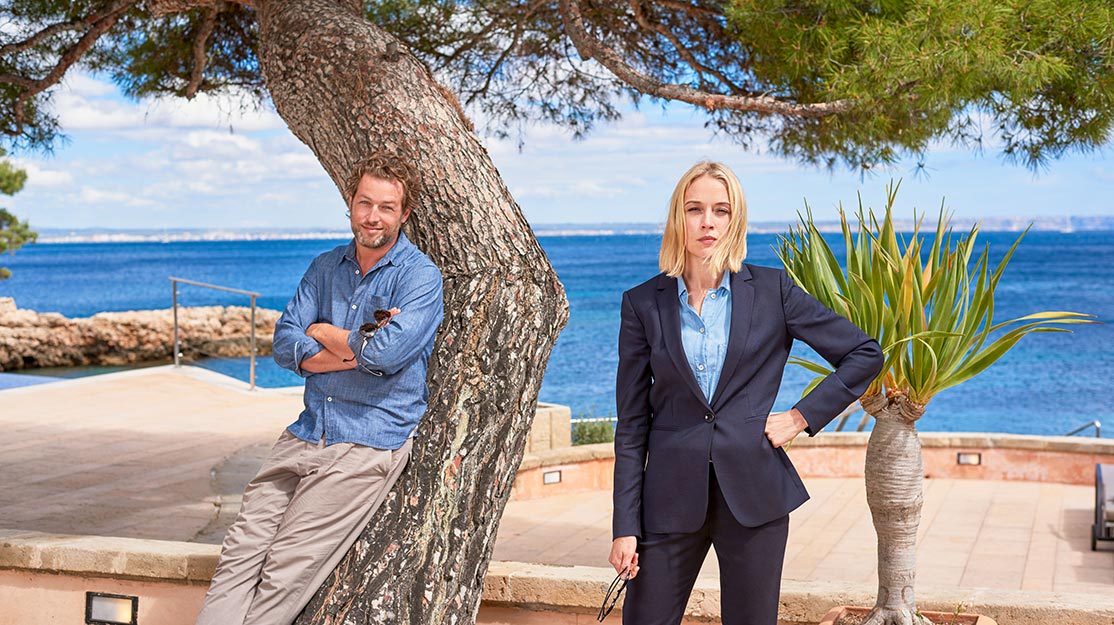 The Mallorca Files aims to be the bright and breezy antidote to the trend for dark, melancholic crime dramas. DQ visited the set on the Balearic isle.

If you heard the word ‘Mallorca,’ your immediate reaction might well be to imagine Magaluf (or its ruder nickname) echoing to the sound of wall-to-wall British stag dos dressed in matching Viking helmets and singing ‘ere we go!’

What you might not think of is breathtaking scenery, marvellous architecture, picturesque town squares, delightful restaurants, historic churches, gorgeous coastlines and mighty mountains.

But that’s exactly what you get in The Mallorca Files, BBC1’s sunny 10-part daytime detective drama. Created by Dan Sefton (The Good Karma Hospital, Trust Me, Delicious), the series offers less of the lager louts and more of the luscious landscapes.

A variation on the theme of the buddy cop movie, The Mallorca Files centres on a mismatched pair of detectives, Miranda (Elen Rhys) from the UK and the German Max (Julian Looman). They reluctantly team up to investigate crimes on the otherwise idyllic Spanish island.

In this series, which is produced by Clerkenwell Films and Cosmopolitan Pictures and distributed by BBC Studios, the twist is that Miranda and Max overturn the national stereotypes: Miranda is uptight and efficient, while Max is charming and easy-going.

Ben Donald, the executive producer, is sitting on a bench in the capital city of Palma, outside the splendiferous Gothic Cathedral of Santa Maria. Known locally as La Seu, this stunning edifice commands a spectacular view of the glistening blue sea.

It is a stone’s throw away from the Port Authority building that is doubling as the exterior of the police station in The Mallorca Files. Over more decades in this job than I care to remember, this may well be the most glamorous location for a fictional police station that I have ever visited. It certainly beats an industrial estate on the outskirts of a gloomy London suburb.

Donald, who has previously exec produced such BBC hits as Wolf Hall, Death in Paradise, Parade’s End and Spies of Warsaw, begins by outlining what he hopes to achieve with The Mallorca Files, which starts on BBC1 on Monday. “Mallorca is not all Kiss Me Quick hats and lobster-red, sunburnt Brits on the lash. It’s a beautiful island.

“When Miranda is posted here, she starts off very buttoned up. But quickly we begin to explore every aspect of the island through her eyes, and she soon grows to love it. She is very happy to stay because it’s so gorgeous and there are so many different facets to it. She sees that it’s a great place to be, and we want viewers to feel the same thing. When they see the show, I want everyone to go, ‘Wow! I would love to be Miranda and Max!'”

Like many feel-good dramas filmed in sunlit foreign locations – Death in Paradise, The Good Karma Hospital or Wild at Heart – The Mallorca Files is cannily scheduled in the bleak British midwinter. “Winter is often a depressing time of year. They call the last Monday in January ‘Blue Monday,’” Donald notes. “We hope that The Mallorca Files will cheer people up in the way that Death in Paradise does. It’s the time of year when series like this do well and when holiday companies start to advertise. People think, ‘Ooh, I wish I was there and on holiday.'”

The Mallorca Files certainly makes the most of the island’s ravishing scenery, also a draw for the makers of upmarket commercials and series as diverse as The Night Manager, Mad Dogs and, of course, reality series Love Island. “We thought about filming this on the Isle of Sheppey,” jokes Dominic Barlow, the show’s producer. “Mallorca is a unique island. It’s got so much going for it. I’m always surprised by what you see around the next corner in Mallorca. It’s the gift that keeps on giving.”

Donald is keen to emphasise that The Mallorca Files – which is also heading to BritBox in the US and Canada and Germany’s ZDFneo – could not have been filmed anywhere else. “We are not in generic Spain. The stories in this series are very much connected to this place and embedded in the local culture. Mallorca has got a very proud history and a strong cultural sense of its own identity, which is reflected in the cuisine and the dialect.

“The Mallorca Files is not a parallel universe of expats. What you get is a very strong sense of this particular island, as opposed anywhere else in the Mediterranean. It’s not an invented island.”

The production has shot everywhere from the airport, a vineyard and an oligarch’s yacht to a nightclub, a bike race, a bullfighting arena and a judge’s house in a TV talent show.

Bryn Higgins, who directs the opening and closing blocks of The Mallorca Files, has found the island an eye-catching and extremely versatile backdrop for the drama, 95% of which is shot on location.

“Mallorca is the third character in the drama after Miranda and Max,” he observes. “It’s an island of great variety and history, and it allows you to go into so many different worlds. In 20 minutes, you can move from the ancient history of the old town to the modernity of the marina. It offers a huge range of locations. The island is a giant film lot.”

Higgins, who has also directed Black Mirror, Garrow’s Law, Casualty 1909, Inspector George Gently and Silent Witness, says what distinguishes this series is its cinematic feel. “In my very early conversations with Dan, most of our references were to American movies of the 1970s. There is a retro movie feel to it. It has pace, style and energy, and each episode draws on a different genre.

“The first episode is a chase movie like Kiss Kiss Bang Bang. The second is a western set in the world of bullfighting, which borrows from Sergio Leone. Then we did an episode about drugs in the clubs using handheld cameras, which has an element of The French Connection. We also did a wonderful satire of The X Factor. It’s wild, funny, intense and has references to Dog Day Afternoon, Network and The King of Comedy.”

The producers go on to underline that, in contrast to many fashionably dark cop dramas at the moment, the tone of The Mallorca Files is bright and breezy.”Sometimes police dramas can be very serious, gritty and depressing. But this is fun and has a lot of energy. It’s like Moonlighting or Dempsey & Makepeace,” Barlow says.

“The police station is not important in The Mallorca Files. It’s not a procedural show. Miranda and Max solve cases in cafés and sitting on the seawalls. We try to keep the island in view all the time. It’s like The Holiday Programme, where you just love looking at the locations. This is Dempsey & Makepeace mashed up with The Holiday Programme.”

Sefton chips in: “The tone is very clear. When we created the show, we said there is going to be no sex crime or missing children – just good, wholesome murder!

“It’s full of interesting themes – drugs, death and bullfighting. It’s not anodyne, but we haven’t gone to the places other cop shows go to – that’s just not my thing.”

One blot on the landscape is the memory of BBC1’s last drama set in Spain: the late and very unlamented El Dorado. Unsurprisingly, the producers of The Mallorca Files think there is no comparison between the two series. “The only similarity is they’re both set in Spain,” asserts Higgins.

“That was a soap. This has genuine cinematic ambition and style. It’s a beautifully written piece, and every film is very distinctive. Yes, it’s a detective series, but it doesn’t settle into familiar detective tropes.”

Before we go, there is one character trait of Miranda’s that we have so far neglected to mention: her piano playing. Might we see more of that in the second season of The Mallorca Files, which the BBC has just announced? “Why not?” laughs Rhys. “We could have The Mallorca Files: The Musical. Who wouldn’t enjoy that?”