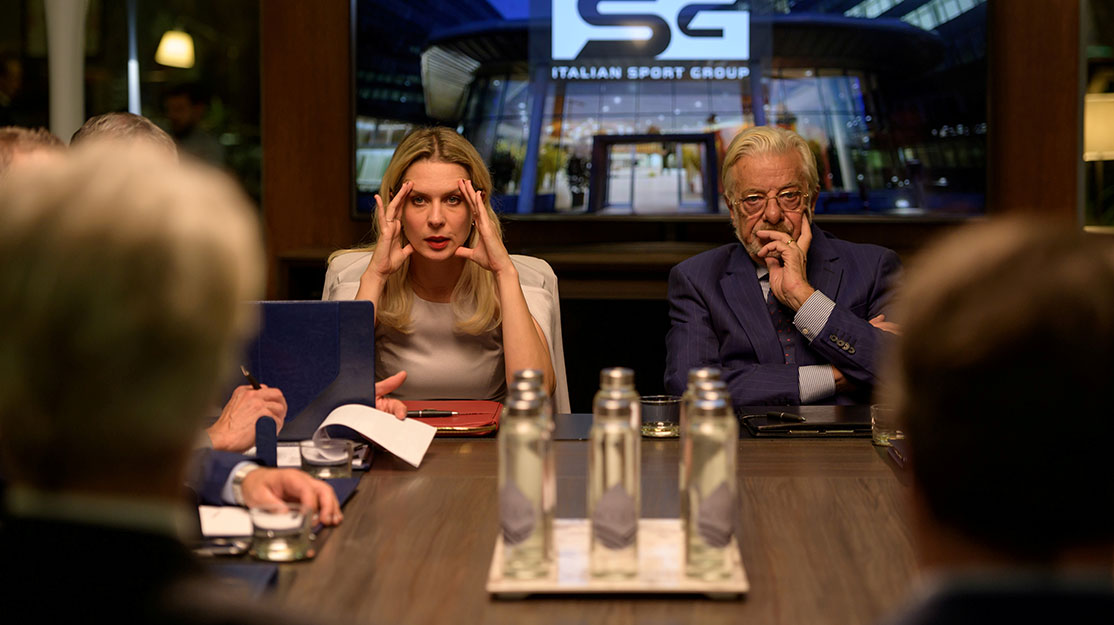 As the World Cup gets underway, a Sky Italia drama focuses on a murkier side of the beautiful game in a story about football agents during one high-stakes summer transfer window. DQ speaks to the cast and creative team behind Il Grande Gioco (The Great Game).

Fuelled by the social media-driven rumour mill, the hopes and dreams of football fans can rest on who their team signs during the summer transfer window. Now, an Italian drama looks set to capitalise on the intense interest in transfers by going behind the scenes with a fictionalised story about this glamorous yet dark market, featuring mega-money deals, ruthless characters, dream locations and nail-biting negotiations.

Il Grande Gioco (The Grand Game) unfolds from the perspective of protagonist Corso Manni (played by Francesco Montanari). Discredited by false accusations, he has gone from being the golden boy of ISG, Italy’s largest football agency, to a pariah.

“When I read the screenplay, I didn’t understand a single word because I am not an expert on soccer,” Giannini tells DQ. “I don’t even know what it means to be a soccer agent, and when I met one, I was just asking, ‘What I should do?’ He gave me two or three hints, and said to make [Dino] very ambiguous. From that, I built my character. Hopefully that comes through.”

Produced by Sky Studios and Èliseo Entertainment, with NBCUniversal Global Distribution handling international sales, the series debuted in Italy and the UK last week, with its German launch coming tomorrow.

Francesco, is your character Corso based on anyone?
Montanari: No, not really. My inspiration was not one single person but more people I happen to know about or have met, and about the fact they [the characters] are ruthless – all of us can become ruthless in certain circumstances.

Giannini: My character is both good and evil. Of course, where there’s good, there’s also evil. That’s the way I played it, in the way my soccer agent [advisor] suggested.

Radonicich: I didn’t get my inspiration from anyone in particular. I agree that none of our characters are ruthless unless they are put in a position to become ruthless. Elena is always in dire straits. She’s having a hard time living up to the expectations everyone has of her. She’s trying to perform and live up to what she has to do, and she puts on many different masks. She’s always looking to be loved by her father – something she’s not receiving.

Were you shocked by what you learned about the transfer window?
Radonicich: I was very impressed by its frantic pace. Cards can change in a second – it’s like gambling at a certain moment. You have to act very quickly, considering the huge economic interest that lies behind all the negotiations. Maybe I was naïve before, but I didn’t expect such a frantic pace after such a long negotiation.

Giannini: I was attracted by the screenplay because I’m not a particular soccer fan and I didn’t know all the dynamics, but I’ve heard about stories of corruption in soccer players and referees, for instance, and I was very curious. That’s the approach I had with the script. I learned a lot and I had fun making the series.

Giacomo, you wrote the series with Tommaso Capolicchio, Filippo Kalomenidis, Marcello Oliveri and Andrea Cotti, from a concept by Alessandro Roja and Riccardo Grandi. What were the origins of the project?
Durzi: The idea was to build a narrative for a show about soccer but not from the point of view of experts or professionals – one able to attract people with the feelings and passion that would be displayed. We built a story about this family and all the dynamics that emerge when there’s the big challenge of the summer transfer window.

Tell us about how you worked with people from the sport.
Marzano: We used consultants involved in the soccer world – players and agents and journalists, especially, but also experts in the transfer market such as [Italian journalist] Gianluca Di Marzio. That gave us a different perspective on the story.
The personal experience of two actors in the series who were semi-professional players in the past was also very important. For instance, Antonio Lagioia played in the Sampdoria youth team, and Jesus Mosquera Bernal [Quintana] actually played in the second division in Spain with Malaga. They had real experience in terms of training, having contact with the press and everything, so that was an important angle.

Why did you think the world of Italian football transfers would make an interesting and dynamic series?
Resinaro: My point of view was that of someone who is not an expert on soccer. I’ve always enjoyed watching football but I don’t support a particular team. I did not really follow the transfer market but, by exploring it, we realised the motives involved are not so well known. We know the players, but not the motives that move the agents. These are very dramatic and important – they hold in their hands the destiny of not just thousands of fans, but also the teams and the players themselves.

Marzano: The transfer market lends itself to being considered as a dramatic, tragic war in a way. It’s a real duel, with alliances, moves and strategies that are set into play to have a winner.

How would you describe the style of the show? Is it very heightened, or did you try to ground it in reality?
Resinaro: We wanted to find a style that could be realistic and true to life while also giving a sense of something epic. We define it as ‘epic realism.’ It was important to find this because we wanted to go behind the scenes of a transfer market that is very well known, so we could not stylise or heighten it too much.

Marzano: It’s not that it’s halfway between realistic and epic – it’s intertwined all the time, depending on the moment of the story.

With calls for shows like The Crown to explicitly state they are dramatisations, do you think there is a similar risk with The Great Game?
Resinaro: I don’t think so. We tried to build a parallel universe; it does not reflect reality. But who knows? Our approach was very different from that of the screenwriters and directors of The Crown, because the language is different and also the motivation. It’s not an account of a true story.

With the series launching to coincide with the controversial World Cup in Qatar, did you want to include themes of corruption in The Great Game?
Marzano: What’s happening behind the scenes with people talking about corruption is something we keep in mind in our storytelling, but it’s not depicted in our series. We know there are dark areas that are not particularly put under the spotlight, and people should investigate [those]. Sometimes in our story, we liked to give a sense that something’s a bit off. The audience will have a sense that there is a darker side.

Durzi: We include some of those areas of the transfer market, but we try not to be negative or positive. We don’t judge, we try to be more open.