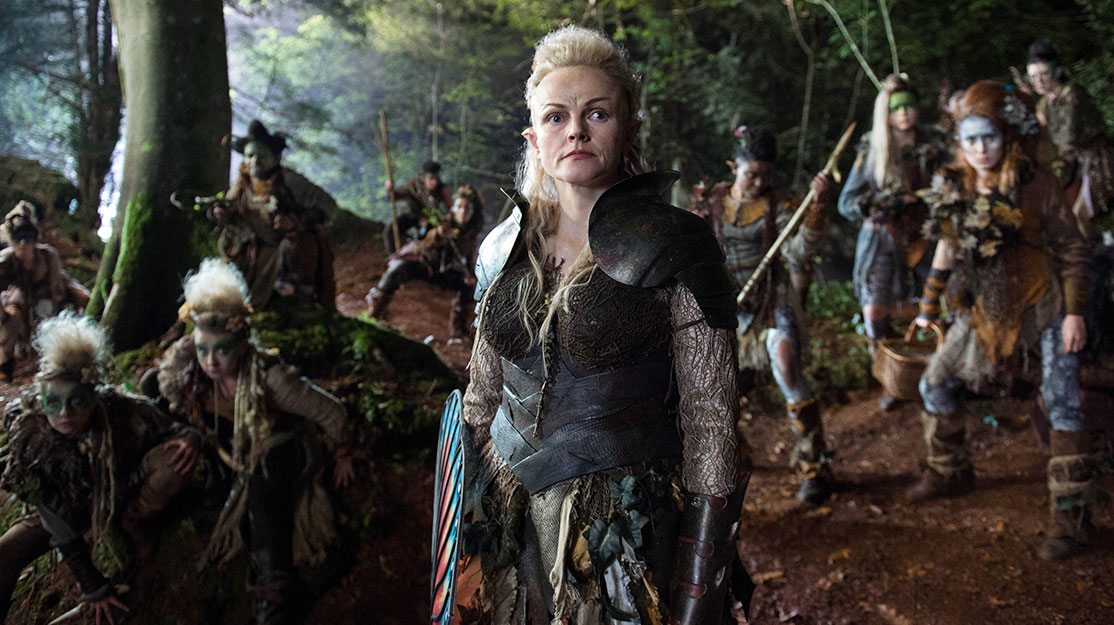 With TNT’s Will and ABC’s Romeo & Juliet sequel Still Star-Crossed airing this summer, Stephen Arnell looks at William Shakespeare’s record as a drama character in his own right.

From the BBC’s recent The Hollow Crown and Russell T Davies’ Midsummer Night’s Dream (pictured top) to Joss Whedon’s Much Ado About Nothing, Michael Fassbender’s Macbeth and Ralph Fiennes’ Coriolanus, TV or movie adaptations of the William Shakespeare’s work always seem to be in production.

And, of course, spoofs (Gnomeo & Juliet, Hamlet Goes Business, Strange Brew), present-day versions using Shakespeare’s plotlines but ditching the verse (My Kingdom/King Lear and My Own Private Idaho/Henry IV and V) and teen comedies based on his work but similarly verse-free, such as 10 Things I Hate About You (The Taming of The Shrew), Get Over It (A Midsummer Night’s Dream) and She’s The Man (Twelfth Night) have become cottage industries in themselves.

But recent years have seen a new twist, with Shakespeare the man making increasing appearances as a character on TV and in movies.

This month will see US cable channel TNT debut the ‘young Shakespeare’ series Will, which launches on July 10. Originally intended for the now defunct Pivot, Will is part of TNT’s ongoing transformational drama drive, led by ex-Fox boss Kevin Reilly.

Apparently presenting the feisty iconoclastic ‘rock ’n’ roll’ side of the Bard, the tone of the series looks set to mirror writer and creator Craig Pearce’s previous work as the scribe on fellow Australian Baz Luhrmann’s Strictly Ballroom, Romeo + Juliet, Moulin Rouge! and The Great Gatsby.

Echoing these movies and other period dramas such as Peaky Blinders, Will boasts a contemporary soundtrack, although veteran composer Stephen Warbeck will be handling the score.

Coincidentally, Warbeck was responsible for the score to Shakespeare in Love, as well as the Henry IV section of The Hollow Crown.

Back in January, Pearce was quoted at the TCA Winter Press Tour as saying that his models in the show for the playwriting fraternity of Elizabethan England were rock stars Mick Jagger and David Bowie, adding: “Theatre back then was like punk rock.”

The show boasts an excellent pedigree behind the camera, with the renowned Shekhar Kapur both directing and executive-producing Will. Having helmed both Elizabeth (1998) and its sequel The Golden Age (2007), Kapur obviously has a feel for the era.

To some, Kapur’s statement that: “If today Shakespeare was around he would’ve been a rapper on the streets,” may ring alarm bells for those who prefer their historical drama straighter than the likes of Reign (The CW) and Casanova (BBC3).

Looking at the acting talent on display, Will has balanced the casting of the largely unknown young British stage actor Laurie Davidson as the lead with a strong supporting company grounded in period drama.

ABC’s Still Star-Crossed, the ‘sequel’ to Romeo & Juliet based on the popular Melinda Taub novel, made its debut in May. Produced by one-woman production powerhouse Shonda Rhimes (Grey’s Anatomy, Scandal, How to Get Away With Murder), the show’s Brit-skewed cast includes relative newcomers Lashana Lynch (Death in Paradise) and Wade Briggs (Please Like Me), together with old hands Anthony Head (Buffy The Vampire Slayer) and Grant Bowler (Ugly Betty).

The role of Count Paris falls to doublet and hose go-to guy Torrance Coombs, familiar to viewers as Thomas Culpepper in The Tudors (Showtime) and as Sebastian (Bash) in Reign (The CW). Reviews have been mixed, whilst audiences have declined from a soft 2.29 million launch, necessitating a schedule move from Monday to Saturday, typically the sign of imminent cancellation.

Variety commented: “While there’s pageantry aplenty, the dialogue is littered with too many lumpy Shakespeare-lite lines and some jarring uses of slang.” The Los Angeles Times wasn’t any kinder: “Parting with Still Star-Crossed after one episode isn’t likely to bring sweet sorrow, but rather the relief of a tragedy averted.”

Shakespeare has featured as a character in a fair few movies over the years, including Roland Emmerich’s Was Shakespeare a Fraud?, drama Anonymous (2011) and the Oscar-winning Shakespeare in Love (1998), the popularity of which tempted the French to try their hand with less success in 2007 with the similar Moliere.

On television, Shakespeare is currently the subject of Ben Elton’s sitcom Upstart Crow (BBC2), a show which has gone some way to restoring the writer’s reputation, harking back to his fondly remembered Blackadder – interestingly, the millennium special Blackadder Back & Forth featured Colin Firth as The Bard of Avon. And, of course, the period-drama-friendly Firth played Lord Wessex in the aforementioned Shakespeare in Love.

Recent comedy shows that have featured the playwright as a character include Comedy Central’s Drunk History (where he was played by John Cho) and The History Channel’s Great Minds with Dan Harmon, where in a bar conversation Shakespeare (Thomas Middleditch) praises the reviled De Niro/Efron comedy Dirty Grandpa at the expense of Harmon’s own Community.

In April 2016, Tom Stourton (Loaded) played Shakespeare in the popular BBC children’s history sketch series Horrible Histories. Prior to this, the Horrible Histories team were behind the little-seen 2015 comedy movie Bill, with Mathew Baynton (You Me & The Apocalypse) as the titular character, together with support turns from Damien Lewis (Billions) and Helen McCory (Peaky Blinders).

Shakespeare has also featured as a character in the long-running sci-fi series Dr Who, notably in 2007’s The Shakespeare Code, an episode that spoofed The Da Vinci Code author Dan Brown and the Back to the Future and Harry Potter movies.

The episode sees the Doctor suggesting some of the playwright’s most famous lines, including “All the world’s a stage” and “The play’s the thing” – which, to some, consciously mirrors Back to the Future’s controversial scene where Marty McFly’s guitar riffs ‘inspire’ a young Chuck Berry.

One has to go back to 1978 for the last fully fledged series with the Bard as the main character, ITV’s Will Shakespeare, a six-part series starring Tim Curry (The Rocky Horror Picture Show, It) in the lead role and Ian McShane (American Gods, Deadwood) as his peer ‘Kit’ Marlowe.

Writer John Mortimer (A Voyage Around My Father) based each episode on the creation of a particular play, with Shakespeare often introducing autobiographical details, such as ‘The Dark Lady’ and a supposedly homoerotic relationship with the Earl of Southampton (played by Nicholas Clay).

Possessing the handsome production values typical of Lew Grade’s ATV (Jesus of Nazareth, Moses the Lawgiver), the series may gain a second life if Will proves a hit.