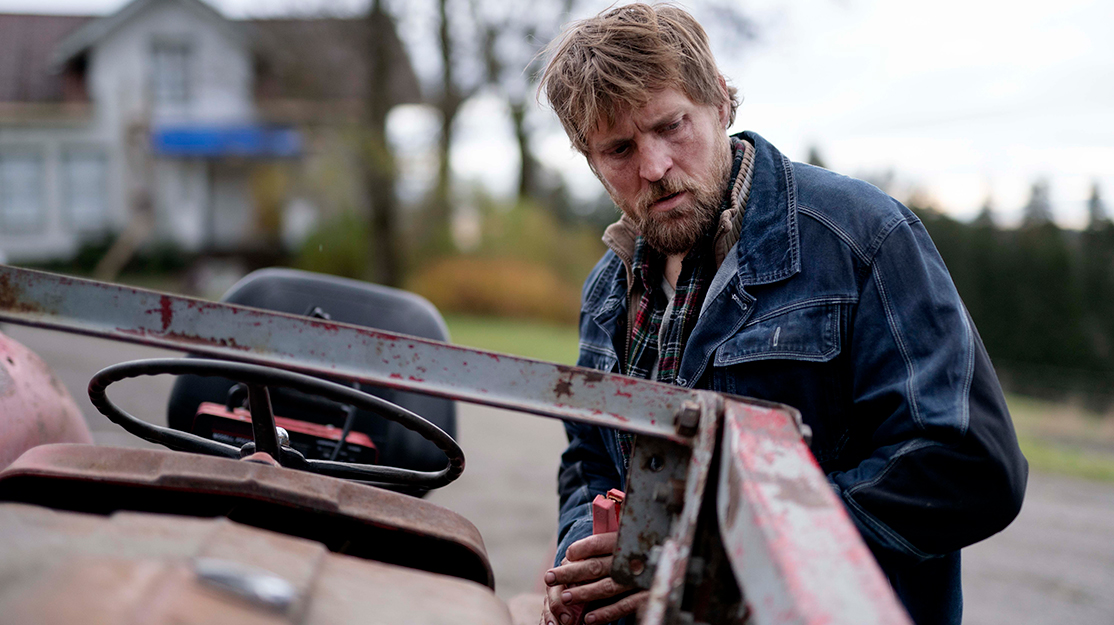 Kim Fupz Aakeson, the writer of Norwegian comedy-drama Velkommen til Utmark (Welcome to Utmark), speaks to DQ about the film origins of his quirky series and the open landscapes that make it a Nordic western.

While HBO Nordic’s eight-part Norwegian comedy-drama Velkommen til Utmark (Welcome to Utmark) has its origins as a feature film, writer Kim Fupz Aakeson wasn’t initially convinced by the idea to turn his movie pitch into a series.

“We had a short couple of pages; it was an idea for a feature film,” Aakeson tells DQ. “I’ve worked with [producer] Paradox in Norway on three feature films but on this one they said, ‘Why don’t we make it a series?’ I was like, ‘Oh man, why does everyone want to make series?’”

But drawn to the idea of expanding the world and the inhabitants of Utmark into an eight-part series, he approached HBO with his pitch for a frontier story set in the very north of Norway. The idea then went back and forth between HBO Europe’s main office in London before the series was greenlit.

With a blend of drama and humour that will be familiar to fans of the Coen Brothers, Welcome to Utmark opens with series of events taking place in the titular town in the middle of the Norwegian countryside, open and isolated. A sheep is savaged, a dog runs free, a wife leaves her husband and one man’s thirst for revenge is set into motion as these events begin to engulf the whole town. Viewers will meet a corrupt sheriff, an alcoholic shepherd, a nature-loving bootlegger, a God-hating pastor and a grieving pimp, as well as an optimistic teacher hoping for a fresh start and the opportunity to live amongst nature.

The show opens with Santelmann’s shepherd, Finn, discovering one of his sheep mauled to death and then confronting Hoff’s wild and unpredictable Bilzi, who has been having an affair with Finn’s wife Siri (Blokhus) and whose dog is responsible for the sheep’s death.

“The basic story was the dog and the sheep and these two guys. This was the feature film,” Aakeson explains. “There was an element of crime in it and one of the first notes HBO gave me was, ‘Lose the crime.’ I was quite happy with that because I’m not a very good crime writer.”

Instead, Welcome to Utmark became a western, with Norway’s northern expanses replicating the vistas normally associated with the genre of gunslingers, saloons, barren deserts and rolling tumbleweeds.

“The north of Norway is our frontier,” the writer continues. “You have the Sámi population that was originally there, you have a lot of booze because it’s very expensive so you buy it from unofficial sources and you have a lot of guns because there’s a lot of hunting there. It’s as western as it gets in our part of the world. Then we said, ‘OK, there’s an undertaker, a priest, a sheriff…’ We made this an updated Norwegian western and then expanded the characters and stories we would tell. We made a lot of decisions on our characters not knowing where they would go or how they would fit in. Then we explored the basic story of the sheep and the dog and how it expands and affects society, and we started playing with the characters and who would do what.

“Quite often in feature films you have a very tight idea and a very tight structure from the beginning. You know exactly what’s going to happen and what’s your mid-point. This was more like a safari, trying to figure out how these people affect each other.”

Aakeson has previous experience working on series in his native Denmark, with credits on restaurant drama Bankerot, its US remake Feed the Beast and Ulven Kommer https://dramaquarterly.com/social-responsibility/ (Cry Wolf). But he admits he feels more at home in the world of feature films, having won awards for Den man älskar, Gnade and Den eneste one. What he does like about writing series, however, is the space he has to take the story in different directions – a freedom not usually afforded to a feature film.

“This was quite a journey because you can allow yourself to take detours in a way you can’t in a feature film,” he says. “It was definitely a different type of job [compared with writing movies] but I was quite happy to write it alone. If I’d had two other writers with me, that would have been overwhelming. It was nice to know if I changed something in episode seven, I could go back and edit what needs to be changed in episode two. What I also like about writing a larger text is it carries on when you’re not in front of your computer. It’s always simmering away and suddenly you’ll know what to do about scene 64.”

Working behind the scenes with Kári, Aakeson found a director who understood the offbeat tone and humour he had written into the series, which features a band of eclectic, often eccentric characters with heightened elements to their personality and numerous sight gags, such as a petty bus driver missing a stop just to annoy the waiting passenger. The scripts – written in Danish and later translated – were finished before the director came on board, but Kári then worked with Aakeson to further develop the scripts with a view to filming the series.

“We’d never worked together before but I knew his work,” he says of Kári. “You can call his work quirky, gritty, funny – but not that funny. The balance of styles [in Welcome to Utmark] is not for everybody but I knew Dagur has this in his feature films. He’s made films in Iceland, Denmark and the US, and he knows when to pause, when to shut up, when it’s funny, when it’s hurtful.

“He read the scripts and I was sure he would say no because he makes his own stuff, but luckily and surprisingly he said yes and he wanted to do all eight. We had no shifts during filming. We had this one steady Icelandic hand on everything, which made it easier to have the same tone all the way through.”

It’s finding and keeping that tone through the series that proved to be the writer’s biggest challenge, admitting Welcome to Utmark stands apart from other series in Denmark. But by adopting a languid, slow-paced style punctuated with moments of often surreal humour, he was able to find common ground with other creatives such as the Coen Brothers, the creators of Fargo, The Big Lebowski and Burn After Reading, among others.

“One of the things they’re always able to do and what fits in neatly into the Danish industry is we don’t have a lot of money,” Aakeson says of the US filmmakers. “I remember in film school, you were often told, ‘You have a man and a woman in an apartment. Now make it interesting.’ Then you think, ‘Well what could I do with these characters? How could I make it funny or surprising?’ Very often you have people talking to each other and you have to line up expectations and twists and make them funny or something other than you expected. This is one of the things the Coen Brothers are great at, making conversation and still being able to attract my attention.”

As the story unfolds, Welcome to Utmark becomes a series about secrets, with the growing rivalry between Finn and Bilzi at its centre and a cast of characters all affected by the unfolding events in surprising ways.

“Bilzi is not very good at hearing opinions other than his own,” Aakeson says. “He makes a lot of trouble for his brother and his new girlfriend and her daughter who moves in, and this leads to the shootout at the end. A western must have a shootout. Some of the other characters, they don’t even know what they are a part of.

“It’s quite rare that what happens in the world is the result of a crazy mastermind or a gangster. Often it’s just people wanting to go from A to B and the effect that has on other people. Nobody knows what’s going on really and things happen to them that they then have to deal with. There are very small stories that don’t do much and then one big one that we start in episode one with these two guys. Someone has to lose and someone has to be victorious, but in a very bittersweet way. It’s not like, ‘Yay,’ it’s like, ‘Oh shit!’”

Filming on the series, which is coproduced by Reinvent Studios, had wrapped before the Covid-19 pandemic spread around the world last spring, leaving only some of the establishing shots of the Norwegian landscape to pick up afterwards. Editing was then completed remotely just before Christmas.

“Editing was different than it usually is,” Aakeson recalls. “I like to be there, not all the time but now and then so you can bounce ideas around, solve problems and get new ideas. This time the director was in Iceland, the editor was in Norway and I was in Copenhagen, so it was different, and not in a good way. It’s nice to meet up now and then but we got through it.”

Aakeson is now awaiting the result of the Nordic TV Drama Screenplay Award, having been nominated for his work on Welcome to Utmark. He also has a connection to another of the nominees, Marja Jul Larsen, the head writer of Cry Wolf, on which he worked and his wife Pernille Fischer Christensen also directed two episodes. The result is due to be announced later today during Göteborg Film Festival’s TV Drama Vision event.

Yet while Nordic noir remains synonymous with the region, having drawn in viewers from around the world with its broody landscapes and gritty, often tortured characters, Aakeson says broadcasters in Scandinavia have shown a lot of “courage” and taken risks to continue its rich storytelling heritage.

“You can’t go on making Nordic noir crime series,” he says. “When we only had two channels that showed drama in Denmark, you were very limited with what you could do. Now it’s all over the place. The number of drama projects in Denmark, Norway and Sweden is crazy because of Netflix and HBO. Before, you had to do something because we knew it worked. Now it’s more like you have to be different because there’s so much of everything. The big issue is now is making something that doesn’t look like the others, which is expanding diversity in drama series.”

Launching across HBO Europe this year, Welcome to Utmark is a prime example of this new-found courage, blending isolated locations with unconventional figures and an unfamiliar blend of comedy and drama. “Everyone’s doing the same thing,” he says of the show’s characters. “They’re looking for love. It’s important you have hope or love or something nice in all the grittiness. There’s always a human ambition to find love and friendship, one way or another, or have a dog.”