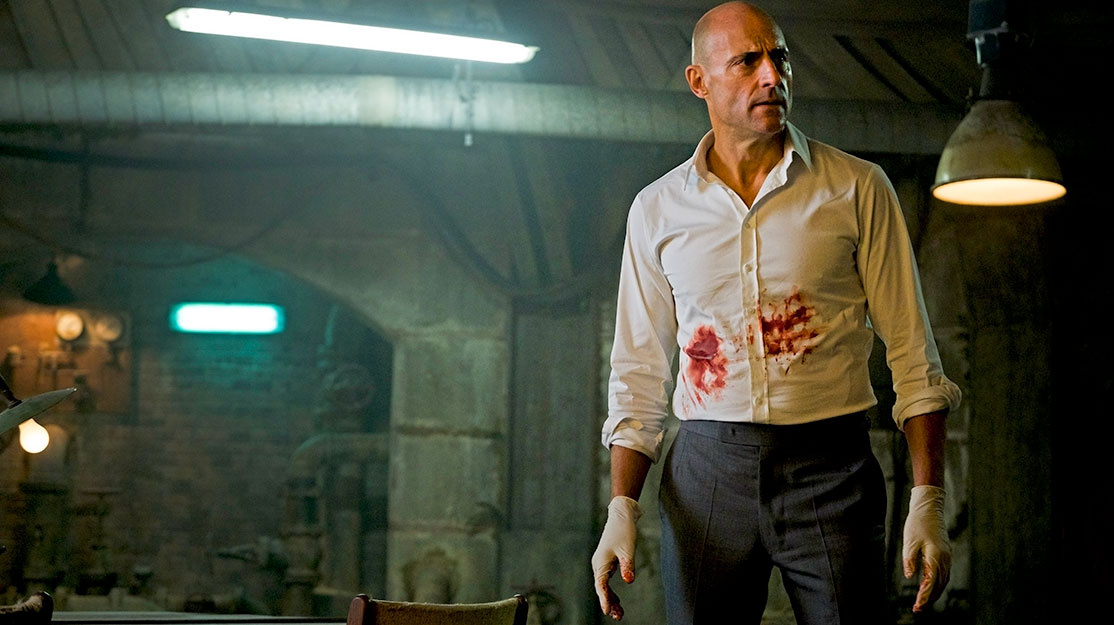 Executive producer Liza Marshall, writer Mark O’Rowe and actor Mark Strong open up about the making of Sky1’s emotionally complex Temple, which is based on Norwegian drama Valkyrien.

Liza Marshall, head of Hera Pictures, and her husband, actor Mark Strong, had sat down together to watch their latest boxset, a Norwegian drama called Valkyrien. Forty-eight hours later, they were enjoying the sights of the country’s capital, Oslo, while they discussed with the show’s creator their ambition to remake the series for English-language audiences.

The result is Temple, an eight-part drama commissioned by the UK’s Sky1 that is set deep beneath London Underground station Temple, where an illegal clinic has been set up in an abandoned network of tunnels.

Strong plays Daniel, a talented surgeon whose world is turned upside down when his wife (Catherine McCormack) develops a life-threatening illness. When conventional options for treatment run out, he partners with obsessive yet surprisingly resourceful misfit Lee (Daniel Mays) to start the subterranean clinic.

They are soon joined by medical researcher Anna (Carice van Houten) to treat a variety of increasingly desperate and highly dangerous patients as Daniel’s morality is tested to the limit in a story that asks how far he is willing to go for love.

Although based on Valkyrien, Temple is less of an adaptation than it is a blend of that show’s central premise and spirit with writer Mark O’Rowe’s dynamic use of character and dark humour. Hera Pictures produces, with Sky Vision distributing internationally.

Marshall, who says O’Rowe comes from the “Martin McDonaugh [In Bruges] school of writing,” agrees Temple is not a straightforward copy. “Because Mark is such a singular writer, in a way it’s a jumping off point. We’ve taken the concept and Mark’s made it his own,” she explains. “As the show develops, we’ve introduced new characters and we take Daniel, our doctor, in a slightly different direction. So both series can sit side by side. In the past, some remakes have been made almost like a translation, a very faithful remake. Ours has the spirit of the original but is something quite different.”

Temple marks playwright O’Rowe’s first TV series, having previously made films including Boy A. “It was a really brilliant piece of work and I’ve wanted work with Mark ever since,” Marshall says of the 2007 movie. “So once I got the rights to the show, he was an obvious choice because I thought his sensibility and tone would really suit the material and he really just got it and wanted to write it.”

O’Rowe describes Valkyrien as “crazy,” with a lot of story crammed into its eight episodes. However, gaps in the plot and new avenues he wanted to explore gave the writer the opportunity to create more complex and conflicted characters.

“We felt the template of the setup, who the characters were and their relationships with each other were the main things to stay close to and, at a certain point, we would have to diverge from the story of the original because there was too much packed in there,” he says.

The writing process began with a writers room designed to assist O’Rowe in the storylining, before he went away and penned all eight scripts. Another writer, DC Moore, also collaborated on the final script.

“In the beginning, there’s a deadline for the shoot – so whether I got there or not, the shoot was happening. I was under a huge amount of pressure but also inspired by the work and running on creative fuel,” O’Rowe says. “I would be writing episodes while people were sending me cuts of earlier episodes so I definitely had to keep ahead of the shoot as we came to the end of the process. As the earlier episodes were filmed and cut together, certain things we had decided on proved not to be what we wanted and we thought we’d taken a step too far. So the last couple of episodes changed the most during the writing.”

Having predominantly starred in movies during his 30-year career, with roles in Hollywood hits including Kick-Ass, Tinker Tailor Soldier Spy and Zero Dark Thirty, Strong had been looking for a  new television series to dive into following his recent appearance in Fox Networks Group action thriller Deep State. “I was definitely looking for something in the TV world to grab hold of and run with, so if we were lucky enough to get a second season of Temple or even a third, it would be a wonderful thing to work on,” he says.

What attracted him to playing Daniel, Strong says, is that the character is an upstanding member of society who, by a series of increasingly desperate decisions, finds himself in a world he doesn’t understand.

“Surgeons don’t get more upstanding. He has a very happy life. He’s married, he has a daughter. They’re all very content. Life is good. Then his wife falls ill and he makes a decision to open the clinic and find a cure for her, which means he finds himself suddenly in cahoots with bank robbers, preppers [survivalists], disgruntled research people and a world he’s not been used to. So his whole world is turned upside down.

“As a character, what you’re watching is someone make a series of decisions that sometimes are ethically and morally unsound, and you have to work out whether this guy, who is essentially an everyman, cope with the most extraordinary decisions to keep his head above water.”

According to O’Rowe, the character of Daniel marks the biggest departure from Valkyrien. In the original, Ravn (Sven Nordin) has set up a illegal clinic and is also trying to find a cure for his wife. In Temple, van Houten’s character Anna is given a beefed-up role to help Daniel. “We’re not trying to sell the lead character as this amazing medical mind, but rather have him as a normal professional up against extraordinary circumstances,” the writer says. “He’s a little less capable in this than in the original.”

Meanwhile, Marshall says Mays (Line of Duty) was her “number-one choice” to play Lee, who has an “odd couple” relationship with Daniel, while van Houten (Game of Thrones) brings an enigmatic quality to Anna, with whom Daniel shares a dubious past.

Wunmi Mosaku (Damilola: Our Loved Boy), Craig Parkinson (Line of Duty), Chloe Pirrie (The Victim) and Ryan McKen (The State) also appear. But the most interesting casting choice is Tobi King Bakare, who plays young bank robber Jamie. “He’d never acted before,” Marshall says. “We found him in a drama group in West London. He had never been on a set before he turned up for his first day at work. He’s really great. He’s now got an agent and he’s in a Netflix show [Cursed]. He’s such a nice man – he’s totally brilliant and a real discovery. [Casting director] Jina Jay did a really great job. Lily Newmark [as Eve, Daniel’s daughter] is great as well.”

Valkyrien took its name from the Oslo train station beneath which Ravn sets up his clinic. Transplanting the story to the UK, there are few better alternative locations than London, with Temple station lying on the northern embankment of the River Thames. The city is well known for its labyrinthine network of tunnels, and some that have been long abandoned and disused were reopened for the show’s production team.

“We shot a lot of the show in the closed Aldwych Tube station,” Marshall says. “There are two platforms that were once in use but beyond them are all these unfinished tunnels. They built three lift shafts and they only ever used one. So there’s all this crazy stuff under London, and the history of the city makes it a really exciting place to set the show.”

When not filming in the real tunnels, production designer David Roger was tasked with recreating the clinic in a disused warehouse in Southall, West London. Marshall marvels at his achievement, describing the set as a faithful recreation of every curve and corner of the London Underground system.

Strong was among those who came to call the set a second home. “When you make movies, you have your nominated days, you go in, you play your scenes and you know that you’re going to be in and out,” he says. “With Temple, I was consistently shooting pretty much every day for five months. But leading a show is a real privilege and the cast we had was amazing. We all got on incredibly well, as we did with the crew, but it’s hard work, waking up at 5am and getting back home at 9pm. The days accumulate. It was tough but incredibly rewarding.”

The actor is not afraid to play a variety of characters, having also starred as “the big bad guy” in superhero movie Shazam and as a First World War officer in Sam Mendes’s upcoming feature 1917.

He’s now also stepping up his role behind the scenes, working as an executive producer on Temple. “Having done a fair bit over the last 30 years, I suddenly realised I do have a useful opinion on certain matters,” Strong says. “I was able to help out with casting and was also able to help out with dialogue a little bit, just to make it sit a little more comfortably in the mouth.

“But the most interesting thing was really realising how much work goes into these things; how much work behind the scenes. Often, as an actor, you’re brought on set to do your job and you’re not aware of how hard everybody else is working. But there’s an incredible amount of organisation required to tell a story like this, and it was a privilege to be to be able to see how is all put together.”

Strong believes Temple contains the best type of storytelling, where viewers will not be sure which way the story is heading or how they feel about the protagonist. “You judge whether what he’s doing is morally unsound or not and, hopefully, if I played it right, and if the story works properly, you’ll feel a little bit of both. You’ll get where he’s coming from and then, at other times, think what he’s doing is beyond the pale.”

Marshall sums up the series, which is already in development for a second season, by describing it as a morality tale. “It’s not a medical drama, it’s not a thriller. It’s about how far will this man go for love and, by the end of the eight hours, how many lines will he have crossed?

“Basically, quite a lot! It’s a genre-defying, rich character-led drama, and that’s what we always wanted to make.”