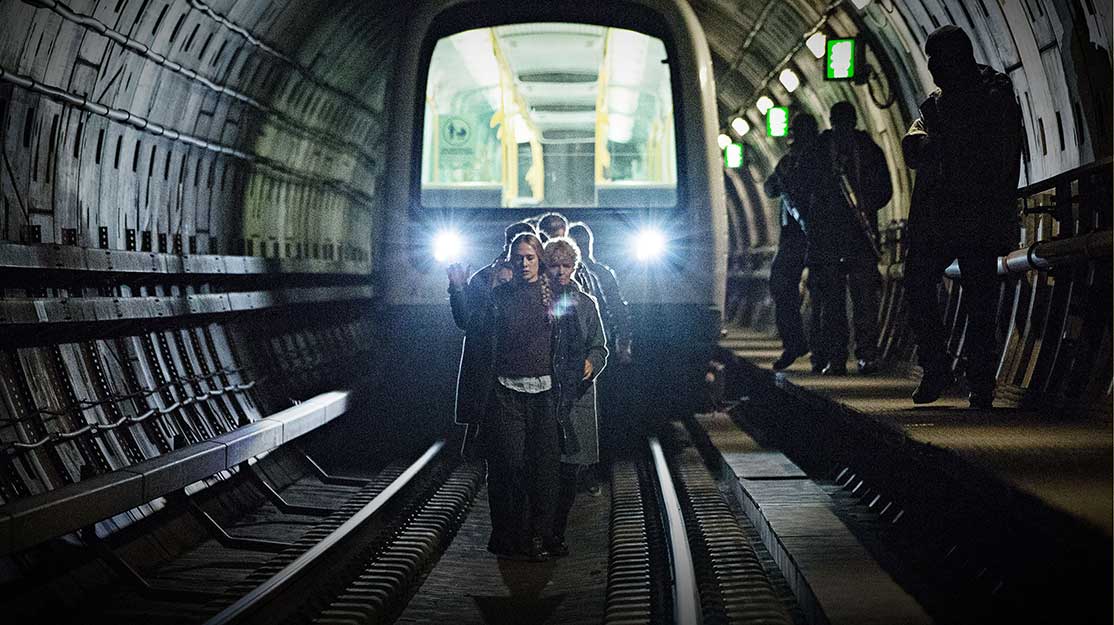 Terror comes to Copenhagen when a group of people are taken hostage aboard a subway train. DQ chats to the creator and producer of Danish drama Gidseltagningen (Below the Surface).

Drama series can be years in the making – yet the team behind Danish hostage series
Gidseltagningen (Below the Surface) went from idea to air in just over a year.

The show’s debut on Discovery Networks-owned Kanal 5 earlier this month was the culmination of a remarkable journey for creator/director Kaspar Barfoed and producer Morten Kjems Hytten Juhl, who came together to bring to life a premise that had already been pitched to the network.

SAM Productions – set up by writers Soren Sveistrup (The Killing) and Adam Price (Borgen) plus producer Meta Louise Foldager Sorensen (A Royal Affair) – had taken the idea of a drama following a hostage situation in Copenhagen to the channel in fall 2015, before Sorensen approached Barfoed to develop the story.

“There were no stops, we just kept moving,” Barfoed tells DQ. “We developed the idea for two or three months, then we got a writers room up and running and started writing the episodes. We went straight into pre-production and started shooting in September 2016, so it was 12 months from the idea to shooting.”

Set across eight days, the eight-part series sees a terror task force led by Philip Norgaard (played by Johannes Lassen) and Louise Falk (Sara Hjort Ditlevsen) attempt to rescue 15 people who are being held hostage on a subway train.

Reporter Naja Toft (Paprika Steen) acts as a go-between with the hostages and police as the savvy captors bait the press with information about the pasts of each of their hostages. And as a media frenzy erupts, the country becomes divided over whether to negotiate with terrorists.

Below the Surface is produced by SAM for Kanal 5 and Germany’s ZDF Neo, which will air the series this autumn. StudioCanal holds distribution rights.

“The main dilemma is the fact that in Denmark, we don’t pay ransom for hostages – it’s just the law,” explains Barfoed of the conundrum at the heart of the series. “We don’t want to encourage others to do it and we don’t want to pay terrorists, which is a great concept – except when it meets reality. It means we’re going to let people die over amounts of money, so we wanted to put that dilemma in front of people.

“Then for the hostage takers, we thought you would use a journalist to let the public get to know these people and put faces on these hostages. Then let’s see if you can still keep that law. And also, perhaps rightly, the journalist feels she’s the one who can help these people, so it’s not just an evil journalist who wants to sell papers. It’s really difficult – it’s an insane dilemma. I don’t know the answer but we thought it would be interesting to ask those questions.”

Barfoed admits he was instantly drawn to the idea of a hostage drama, but adds that Below the Surface isn’t based on any specific real-life incident.

“Just hearing the word ‘hostage,’ there’s instantly a lot of drama that can grow from that. But our ambition was to look at who gets involved, who gets the phone call and what the dilemmas are. What are the tough choices someone has to make and, if you’re the one who gets taken as a hostage, what do you go through? That was really interesting and the more we talked to people, the more research we did, we found there was so much there.”

Barfoed spent several months outlining the story before linking up with four other writers, Astrid Oye, Per Daumiller, Lars K Andersen and Michael W Horsten. He then opened a writers room, which mapped out each individual episode.

“One person would go and write an outline, come back, we’d talk some more and then they would go home and write a draft,” he explains, adding that there would only be three writers in the room at a time. “We’d talk about it more and do another draft. That was the process. People in the room would change but typically it was three people beating out the story.”

With such a rapid schedule in place to get the series ready for Kanal 5’s spring schedule, lots of joined-up thinking was needed between Barfoed and producer Juhl.

This meant there were discussions from the outset about the scope of the series, how it would look and how they could maximise their modest budget.

“It could have been a totally high-end show or it could also be scaled down,” Juhl explains. “We found a reality in the middle somewhere. With the financing going on quickly, we had to develop the idea with flexibility in the budget. So we had to keep an open mind and constantly communicate, sometimes daily but always weekly.”

One key decision made early on was to build a Metro station, which would be used to complement the limited amount of location shooting the producers were able to do at a real underground station. But building the set also afforded the production team the chance to then construct the police base right on top.

“That’s quite a cheap thing to build because it’s not an actual police station, it’s more like a barracks, and it gave us a lot of flexibility in terms of shooting,” the producer says. “So with these two primary sets built and an idea that we should shoot half of the show there and the rest on location, that shaped a nice production design that we would work from.”

“That was very important because we could then write for a specific number of speaking parts, so that we didn’t deliver a script only to be told you can’t do this and you can’t do that,” says Barfoed.

“From the first arc, we knew what the beats would be. We also knew which characters we wanted to focus on in each episode. Each one has a main character we focus on, who is then a less important character in the rest of the show, so along the way you get to know the whole ensemble more. We do have a few characters in the police we get to know, but the deep character studies are with the hostages, because they are in a situation where it makes sense to reflect on who they are and how they ended up there. The thought that you could be on the train that day is something we can all relate to – those who are caught there are just unlucky. They just happened to be in the wrong place at the wrong time.”

Barfoed’s duties weren’t confined to the writers room, however: he also directed the first two episodes, with Christian E Christiansen and Roni Ezra helming later instalments. And rather than create a series full of overblown action sequences, Barfoed says character took centre stage, with the belief that the inherent drama of a hostage situation would be entertaining on its own merits.

“We just needed to make the characters engaging,” he says. “It has a lot of pace but we never wanted to Hollywood it up. We wanted it to feel realistic. We got really good directors to do the following episodes so I didn’t want to lead them too much. I wanted to give them the opportunity to do it themselves. Obviously we talked a lot and they saw the rushes, so they had a pretty good idea of how we shot it. We kept the crew as much as we could all the way through, so it was actually a pretty smooth transition when we changed directors and DPs.

“The basic stylistic approach is that there are two worlds – right next to each other, separated by height. But they have completely different looks and paces. It’s a dungeon down there, it’s in Copenhagen where we’re building a metro right now. And upstairs is where the negotiators and investigators work, so they want a lot of light and a place where they can move around quickly and talk to everyone. It lends itself to lots of contrasts.”

Designed as a closed-ended series, Below the Surface could return with a new challenge facing the terror task department and its main characters. But should it not get a second season, Barfoed hopes the show will leave its mark.

“We hope it will be something that is perceived as having more substance than a standard crime thriller,” he says. “It goes into the psychology of people caught up in this and takes a realistic approach to what would happen.”

And with other hostage dramas on air and in development, including Ransom and Embassy Down, it looks set to lead a new wave of crime series on television.