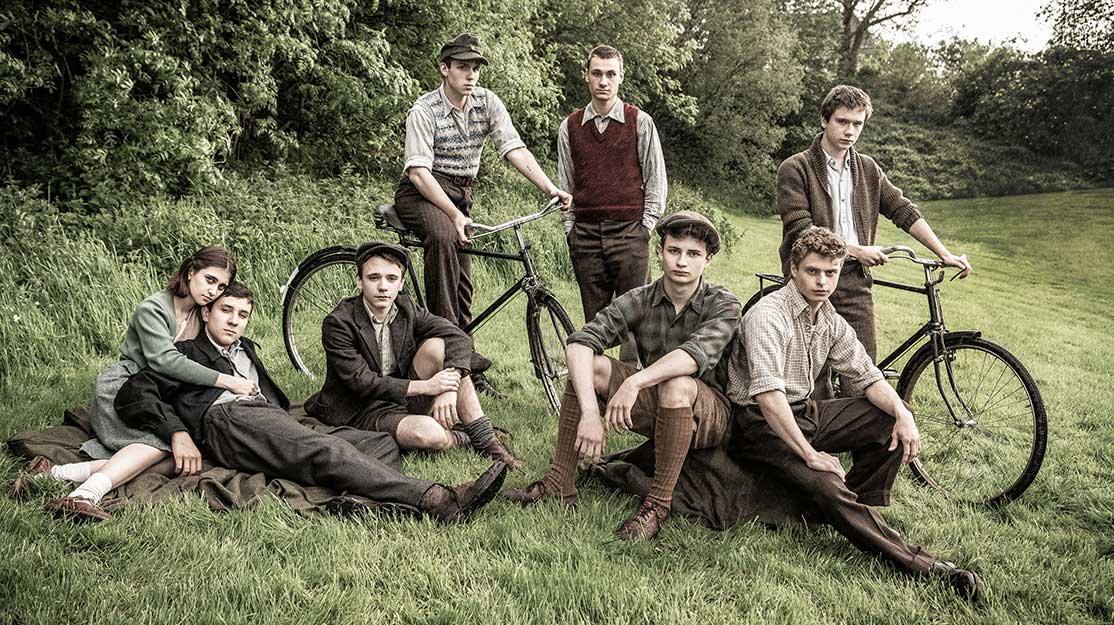 The previously untold story of how hundreds of children came to the UK from concentration camps at the end of the Second World War is dramatised in The Windermere Children, a stark and poignant film commissioned to mark the 75th anniversary of the liberation of Auschwitz.

In the summer of 1945, following the end of the Second World War and the Holocaust, hundreds of orphaned Jewish refugees started new lives in the picturesque surroundings of England’s Lake District.

When the Nazi concentration camps were liberated at the end of the six-year conflict, the survivors included many Jewish children who had been separated from their families and lived through the horrendous conditions they were confronted with.

On August 14, 1945, 300 young people – of a variety of ages and backgrounds – were brought from Prague via RAF aircraft to the Calgarth Estate beside Lake Windermere, where these children would spend four months together. In total, more than 700 young Jewish refugees came to England after the war.

This remarkable story is now the focus of a single drama commissioned by BBC2 in the UK and Germany’s ZDF, which airs today to mark the 75th anniversary of the liberation of Auschwitz.

The 90-minute film opens when a coach full of quiet, nervous children arrives at the former factory accommodation that would become their temporary home.

Carrying only a few small possessions and the clothes on their back, they are initially hesitant about what awaits them as they are asked to line up and hand over their belongings – a process echoing their time in the camps. The subsequent sight of their own bedrooms and plentiful baskets of fresh bread is initially overwhelming.

What transpires is a story of hope and survival as a team of counsellors try to help the children come to terms with their horrifying experiences and reclaim their lives. Together, they learn English, ride bikes and play football, while revolutionary art therapy sessions reveal some of their darkest nightmares – an element fully realised by the haunting screams that fill their dormitories each evening.

“I’d heard of The Windermere Children story before but I’d never understood the importance or the audacity of the undertaking or just what a life-changing event this was,” says Patrick Holland, controller of BBC2.

“Taking hundreds of children who had experienced the very worst of humanity is capable of and using the bucolic setting of the Lakes to help restart and reset what life could be felt like a work of fiction. But it was clear this transformative story demanded to be told.

“The Windermere Children explores the ability to start again in the darkest of times. It shows the profound positive impact one group of people had on the lives of others. It celebrates a nation welcoming the most vulnerable and allowing them to thrive.”

Writer Simon Block didn’t know the story, but was approached by producer Wall to Wall with the idea of bringing it to the screen. He says the way into the story became clear after meeting some of the real-life Windermere Children, the majority of whom were boys, and speaking to historians and researchers about what took place over those four months in 1945. Advisors included Trevor Avery and Rose Smith of the Lake District Holocaust Museum and the 45 Aid Society.

‘It was then a question of processing all that information and making sure we had a skeleton of a good story,” Block says. “However much information you have of a story that happened in real life, it still has to have the shape of a drama – but you don’t want to bend the facts to the shape. There was quite a lot of reworking to make sure we were accurate but also telling a compelling story.”

Garai, whose father’s family emigrated to the UK from Hungary before the war, describes Paneth as a “really incredible person.” She continues: “She developed art therapy and play therapy and had worked originally with children affected by the Blitz, and that was how she was drawn into the project.

“What the film really describes brilliantly and interestingly is the understanding that people came up against the greatest tragedy of all human history and found themselves maybe not quite prepared for that. They had all these wonderful intentions but the tsunami of suffering was something I don’t think they were ready for.

“People didn’t really know what they were doing except that they understood the human experience had to be more than just survival. It also had to be happiness, and they were trying to generate that feeling in the children again, or at least suggest it could be something they were striving for. It was very moving to me. They were really courageous people who were also slightly struggling in this very difficult situation.”

Glen expresses admiration for the way The Windermere Children, which was filmed in Northern Ireland, captures the horrors of the Holocaust without showing them, with the drama absent of any flashbacks or concentration camp reenactments.

“It was really down to these young actors who managed to do it, and Michael [Samuels, director] was brilliant with them,” he says. “You wanted that suggested history without every depicting it.”

Lawrence was a retired PE teacher who offered to help the children when they arrived at Windermere. “Just being outside and being active in the beautiful surroundings was actually really vital to a lot of their recovery,” Glen says. “All the people who received the kids weren’t quite prepared with the level of trauma and how to deal with it. In a simple sense, just getting them out and active was incredibly beneficial.”

Montefiore was behind the project, persuading the British government to allow hundreds of young Jewish concentration camp survivors to come to Britain, with the project supported by donations from the British Jewish community.

“They had no family to go home to. Something had to be done, and Leonard’s the kind of guy who fights and fights until those things happen,” McInnery says of his character. “He manages to raise money and convince politicians. I have huge admiration for these people; I’m hopeless at anything like that, so it’s humbling to play someone like that – who fights so hard on behalf of other people and dedicates their lives to it.

“What everybody managed to do in the space of four months is astonishing really. With these extraordinary people, the lives they [the children] managed to have afterwards are partly down to the people who gave them such help then.”

While the film – coproduced by Warner Bros ITVP Germany and distributed by Fremantle – is moving throughout and at times nightmarish and distressing, it is particularly poignant when the Red Cross delivers news of the fate of the children’s families, with none of it being positive. But it is ultimately a hugely uplifting and hopeful story, not least in the beautifully shot finale when the main characters stand on the bank of Lake Windermere, only to morph into their older, real-life counterparts.

“I would be instinctively cautious about doing something like that, but I felt in this situation it was absolutely merited and a way to link the past and the present,” Samuels says. “What we tried to avoid was the sense that ‘everything’s sorted out now’ in four months, which would be ludicrous. But what we’re saying is we can imagine these people have hope and they will take something away from Windermere that didn’t exist beforehand.”

Block notes that it would be too easy to downplay the amount of suffering the children went through. “It didn’t end at Windermere by any stretch of the imagination,” he adds. “We wanted to avoid patness and it wasn’t about trying to rub the audience’s nose in human misery. It’s a much more interesting story about how these children came together and built a platform for the rest of their lives. They weren’t necessarily easy [lives], but they did that and it was important to end the film on an uplifting note.”

Certainly, the survivors and their families who attended a BBC screening of the film were satisfied by what they saw.

Polish-born Arek Hersh, who spent three years in concentration camps and now lives in Leeds, said the show was “very realistic,” adding: “It made me weep a bit, from time to time, and it was a true story of what actually happened.”

Harry Olmer, a fellow Polish survivor who went on to become a dentist in Glasgow, added: “The people who portrayed us were absolutely spot on. We were seen to begin with as semi-savages and yet we were brought back into humanity. We became human beings again.”