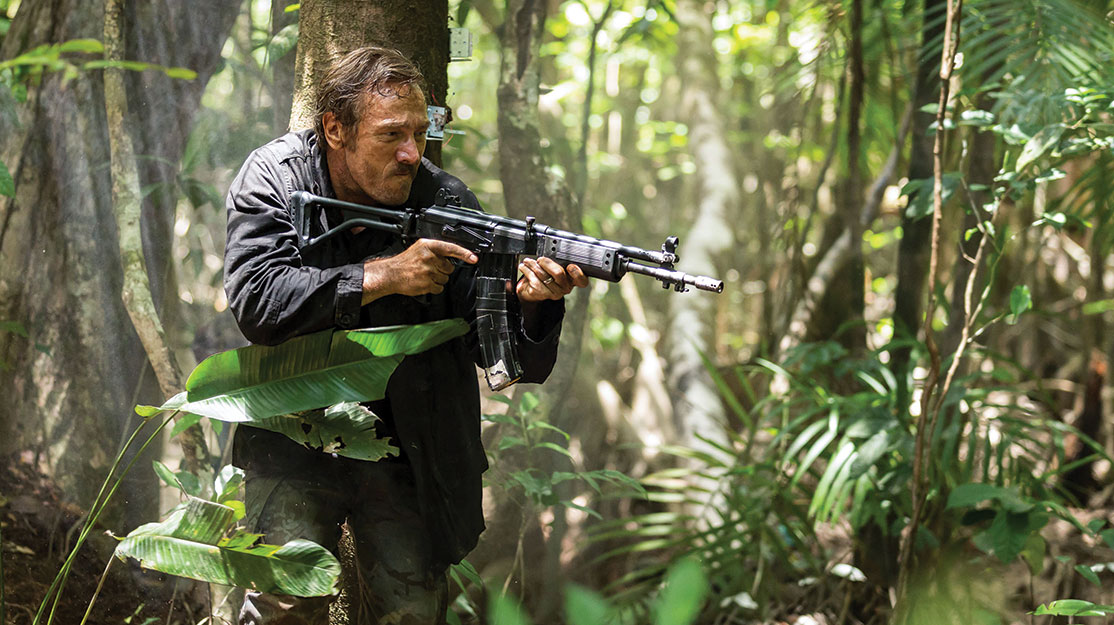 Welcome to the jungle

A new French drama is set to take Canal+ viewers on a thrilling ride deep into the Amazon jungle. Creator Fabien Nury and producer Bénédicte Lesage tell DQ about their own journey with Guyane (Ouro).

When Parisian geology student Vincent heads to French Guiana to complete an internship at a gold-mining company, he quickly falls under the wing of a local gold lord and into the lucrative world of trafficking the precious metal.

So begins a heart-stopping adventure ride in Guyane (aka Ouro), French pay TV broadcaster Canal+’s original drama from creator Fabien Nury and director Kim Chapiron. Led by a cast including Olivier Rabourdin and Mathieu Spinosi, the show will take viewers deep into the Amazon jungle for an experience distributor Newen Distribution vows they will never forget.

Guyane is produced by Mascaret Films and distributed by Newen Distribution, who have already sold it to RTL Crime in Germany.

Here, Nury and Mascaret producer Bénédicte Lesage tell DQ how the eight-part story – which debuts tonight – was pieced together, how they settled on a visual identity for the series and the challenges of filming entirely on location in a remote and isolated environment.


Where did the idea for the show come from?
Fabien Nury: I have to say, even if it’s not romantic, that it was an order from Canal+. They wanted an adventure story set in modern-day French Guiana, and that was it. I asked them if it had to deal with illegal gold mining, which is ongoing in the region, and, of course, they said yes. My first idea, which stayed true to the end of the season, was that if we told the story of one illegal gold site, it would give us a great look at the reality of the entire process. It all comes down to this: nowadays, 5,000 miles away, men risk their lives in the wilderness, kill and get killed for a fistful of gold. It’s real and it’s happening today.

How was the story developed for the broadcaster, Canal+?
Nury: We defined a genre – ‘crime and adventure’ – and a double point of view: a young newcomer, Vincent, and an ageing gold kingpin, Antoine Serra. We also defined the level of realism we needed – and with that, the pace of our storytelling. High realism means a slower pace but we needed our story to remain believable and to move fast. So we decided to aim for something closer to Breaking Bad than The Wire.
The rest of it was, mostly, a lot of work – a great deal of research, narrative construction, writing and rewriting. Once the pilot was constructed, written and dialogued, I decided to complete a full treatment of the entire season – around 100 pages – to have the storylines, character arcs and structures precisely mapped out for everybody working on the series. It took a long time but, in the end, it proved useful.

How would you describe the writing process on the show?
Nury: Exhausting. The treatment helped a lot. I had collaborators, Sabine Dabadie and Frederik Folkenirnga, who did research, took notes and discussed the story with the producers and myself, but at some point it was decided that I should write every episode of the first season to maintain the consistency and the style of the show. Like always, the first part felt like a marathon and the last part like a sprint. I still had to complete four episodes once pre-production had started. I was lucky enough to find most of my work validated by people living in French Guiana, or familiar with the gold business. It gave me enough confidence to complete the second half of the season, while polishing the first half with the directors.

How did you work with the directors on the visual style and tone of the series?
Nury: Kim Chapiron, the first director, always shoots in a documentary style: hand-held camera, lots of takes and heavy editing. In the end, a number of shots were way above average. I believe this style matches quite well with the first half of the season, while we’re still in discovery mode. It makes us feel there’s life around the story. Then Philippe Triboit efficiently took over, adjusted his own style to Kim’s and streamlined it a bit, to add intensity as the season went on. And I directed the last episode, focusing mostly on the characters, the violence and the hell they’ve created for themselves. It was only possible because the environment and characters had been brilliantly established by Kim and developed by Philippe.
I was very happy to direct the season finale; I can’t help it, I like endings more than beginnings. There’s always more emotion to saying goodbye than there is to saying hello. Directing was hard and stressful work too, but I saw it as a great reward. And I tried to bring a real feeling of closure to the finale, like the last chapter of a novel. Of course, there will be other seasons, other “novels” with these same characters and the ending has to remain open and promising. But it can’t be just one more episode with a cliffhanger. As a viewer, I always resent that kind of trick. I take pride in thinking we avoided it.

Who are the lead cast members and what do they bring to the series?
Bénédicte Lesage: The cast – Olivier Rabourdin (who plays Antoine Serra), Mathieu Spinosi (Vincent), Issaka Sawadogo, Anne Suarez and Flora Bofanti – are highly talented actors from a wide variety of backgrounds, who shared a passionate interest in embodying a new type of character and in participating in this great jungle adventure. They worked on location as they might have in a theatre or on tour, some 5,000 miles from home. They drew inspiration from the fabulous natural settings of French Guiana, of [capital city] Cayenne and its hinterland, the natural beauty, the tropical heat, the harsh conditions, the mosquitoes and the exhaustion. They also found strength in their local partners, Guianan actors, many of them non-professionals but filled with a desire to act and a great sense of accuracy too, which re-energised everyone’s passionate fervour.

Where was the series filmed and how were locations used?
Lesage: The series was shot entirely in French Guiana, apart from an opening scene in Paris. This was an enormous challenge because French Guiana is a South American country deep in the Amazon, practically hemmed in by northern Brazil. It is basically only known as the hinterland of Cayenne, infamous for the forced-labour camp seen in the 1973 Steve McQueen movie Papillon. Outside of its towns, there is not much infrastructure. Film or other audiovisual facilities are rudimentary. One effect of the series has been to help develop local acting talent and help institutions develop a cultural and economic sector. Our ideal would be that, from season to season, the series would become majority Guianese-made.
Most of the locations are within two hours’ travel from Cayenne. The village called St Elias in the series was shot at Kaw, a place only accessible by dug-out canoe! The gold-panning site, Camp Alpha, was entirely built in the middle of the jungle on public land at Roura. The various canoe trips were shot at Roura, in the Kaw Marshes or at Petit Saut.

Nury: A script will only show you how a story works. It’s when you’ve got the locations and casting that you discover how it lives. We had great locations and wonderful actors on this show; places and faces we’ve barely ever seen on screen. And some of them are wild!

What were the biggest challenges of the production?
Lesage: Our greatest challenges were getting the infrastructure for a major production into place – portable toilets, water, food for cast and crew, getting gear into Kaw by helicopter and so on. We also wanted to avoid serious accidents or disease in our crew. We needed to work out ethical ways of working with the locals and to make sure each of the many communities based in French Guiana – Creole, Maroon, Hmong, Brazilians, French – got a share of the work. We felt they were very happy we were there but also that they were scared we might not be able to pull it off. In fact, to them, the shoot itself was the adventure story, the drama – a fantasy compared with the hardship of their everyday lives. Another problem we had was scheduling a shoot in the dry season. Fabien, who shot the last episode in December 2015, had to run against the first rains that would have made shooting just totally impossible. He completed it just in time.

Nury: The shooting schedule was tight. People didn’t sleep much and lost weight. But that pressure also kept everybody sharp, on edge, and I hope it shows in the finished cut. It takes an adventure to create an adventure. It’s always more difficult to shoot nights in the jungle than days in the office, but it’s also very stimulating. You can’t shoot that in your backyard and sometimes you think it’s too hard or demanding. But the good side is that it doesn’t look like your backyard.

What do you hope viewers take away from the series?
Lesage: I hope viewers come away with a taste of adventure, a desire to visit Guiana and a love for this unusual cast. And, of course, a big sense of discovery.

Nury: I hope they see it as a proof that it’s still possible, in 2017, to find adventure in this world. It’s a journey, a great ride far away from home, but set in our modern reality. I think the main promise of any adventure story is this: dangerous men entering unknown territories. I was happy to create such a story on TV; they’ve become too rare.

What are you working on next?
Lesage: Right now, we’re working on season two, and a few other unlikely projects, which is how I like it – different, varied, compelling. And I hope Fabien and I will come up with a new adventure to work on together soon.

Nury: When I don’t work for TV or film, I write graphic novels. There, I have unlimited budget. One I wrote called The Death of Stalin has just been adapted for the big screen by Armando Iannucci, with an incredible all-star cast.