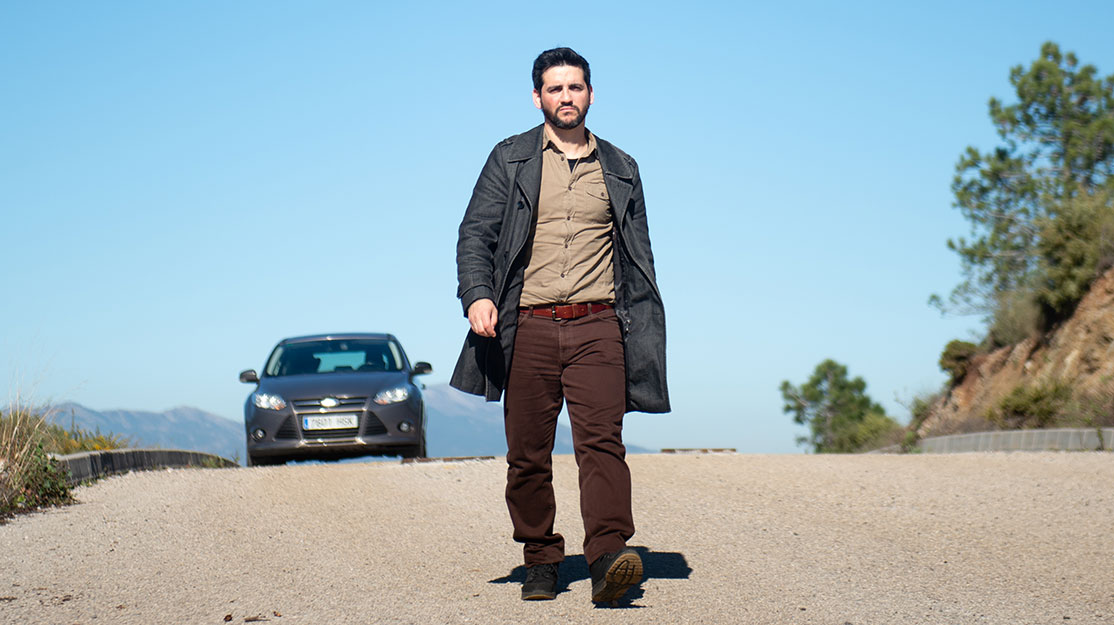 Nordic noir collides with the sunny Mediterranean in Finnish-Spanish drama Paratiisi (The Paradise), a crime series inspired by a community of Finns living on the Costa del Sol.

The story of how Fuengirola, a town on Spain’s sun-soaked Costa del Sol, became home to a vibrant Finnish community begins with the 1976 Olympics. Looking for a warm weather destination to prepare for the event during the cold and dark winter months, Finnish athletes began training there – and in the subsequent years, thousands of their compatriots followed in their footsteps.

In this corner of southern Europe, one area of Fuengirola, Los Pacos, is now home to a Finnish school, shops and roads, with signs in both Finnish and Spanish. It also provides the perfect backdrop to a new drama set in this unique neighbourhood.

Paratiisi (The Paradise) introduces 60-year-old police officer Hilkka Mäntämäki (played by Riitta Havukainen), a senior criminal investigator from Oulu who travels to Spain to investigate the disappearance of a Finnish family. At home she is struggling to cope with her husband, Aarne, who is suffering from dementia, so the opportunity to travel gives her a chance to escape her problems. But following a spate of crimes, she becomes drawn into solving them alongside the Spanish police and soon discovers a connection with Detective Andrés Villanueva (Fran Perea).

Jarmo Lampela, head of drama at Finnish broadcaster YLE, and David Troncoso, formerly an exec at Spain’s Mediapro Studio, were thinking of creating a story involving Finland and Spain when they discovered Fuengirola and thought it would be the ideal setting for a drama, bringing together the best elements of Nordic noir and the Mediterranean. Writer Matti Laine, Lampela and Ran Tellem, head of international content development at Mediapro Studio, then spent time in Spain to discover what that story might be.

“We had two really interesting visits when we first started,” Tellem recalls. “First we went to see the head of police and we asked them, ‘Is there anything happening in Fuengirola with the Finnish community?’ He says, ‘Yeah, there’s lots of problems. There is drinking problems, drugs, violence.’ Then we went to meet the woman in charge of the local Finnish newspaper. We told her we heard there’s lots of problems but she says, ‘No, it’s paradise.’

“So that was the beginning of a story that talks about a very unique community. It’s almost like a little Finland in a place that doesn’t look like Finland and that has completely different temperature, not just weather wise but also in the way that people act and interact.”

From early on, themes of memory became a thread through the drama, from Aarne’s memory loss to the question of when you move to a new country, what do you take with you or leave behind. What do you try to forget?

“It’s the metaphor of the whole show – a person trying to cling to his memories, but they’re fading away,” Tellem says. “All of us that have ageing fathers and mothers can relate to that. The origin of the story, for me, it resembled what the kibbutz is in Israel: a very small, closed community where horrible things can happen, and nobody knows what’s happening. That’s why the story connected really well because that little community was also the little community in a small town in northern Finland. This is where the story came from.”

After several writing conferences, Laine wrote the scripts first in English and then, when they were locked down, they were translated into Finnish and Spanish. Part of the series also uses English as a common language between Hilkka and Fran.

“It was really interesting when we had our first meeting in Malaga,” Laine says. “I had never met Ran or David and I was so totally nervous about how it was going to work. I couldn’t eat. It was amazing, because after two hours, we were all working together. We did a lot of drafts and Ran especially gave me feedback all the time which made my work much easier.”

The backdrop provides an interesting culture clash, something that also drew director Marja Pyykkö to the project. “All of us who live in the northern countries, there’s a little Spanish person living inside of us,” she jokes. “What was really special was the mixture of languages, but also a mixture of rhythm. There’s a cliche about the Spanish – hot tempered, fast-speaking people – and the calm Finnish people, but there are so many similarities you can find within the story.”

Pyykkö, who speaks Spanish, joined early in development so was able to offer notes and feedback to during the writing process. “I’ve done some crime stuff before, but really what’s in my interest is the character lines, to really be able to follow them emotionally,” says the director, whose credits include Finnish series Hooked and Onnela. “It was easy to find who Hilkka is but I also spent some time in Spain trying to find Andrés’ character, like why is he a policeman? What happened to him? Hilkka’s husband is fighting to hang on to his memories but then Andrés is fighting to forget something.

“To be able to rehearse [with the actors] was also very nice. We had time, first in Finland with the Finnish cast, then in Spain and then with a mixture rehearsing and going through the text, so that we really understood what we’re doing.”

At the centre of the story is Hilkka, who might ordinarily be an outsider in a foreign country but finds herself in somewhat familiar territory, surrounded by other Finns living on the other side of Europe.

“She’s struggling with family life. She really loves her work but it’s obviously taking too much of her time from her grown-up daughter and her husband and then she still has a flame inside her – she’s really energetic and there is a drive in her,” Pyykkö says.

Tellem continues: “There’s a lot of pain because we’re telling a story that isn’t told very often. We tell many stories about falling in love but we rarely tell a story where you untie your love, but not because you’ve fallen out of love but because that person is no longer the person you’re in love with.

“In the beginning of the story, Hilkka has left her career to take care of her husband, and she does that with a lot of respect and a lot of love and she knows it is her role. But after this becomes harder and harder and sometimes violent, she needs to make a decision, whether she is going to be her husband’s nurse or herself. It’s such a hard dilemma. It’s so painful but she has to go through that. That’s also the moment she’s coming back to life. It’s a dramatic tragedy, letting go. But in order to keep living, she has to do that.”

Havukainen (Fakta homma, Harjunpää ja heimolaiset) was cast as Hilkka from the start, with Tellem and Laine immediately set on the actor. For the part of Andrés, a poster in Madrid of long-running Spanish series Los Serrano reminded Laine of the programme he watched as a teenager, in which Perea played Marcos Serrano Moreno, the writer’s “hero.”

“So I thought, ‘Where is Fran Perea these days?’” he says.

Perea, it transpired, has been a regular fixture on television since Los Serrano, a family drama that ended in 2008. But working on The Paradise was “one of the best experiences I have had,” the actor says, “because every day you had a challenge in front of you and you had to fight with that. It’s the best job you can have as an actor, because if you don’t have conflict, you don’t have work.”

Rehearsals, which he says are uncommon in Spain, were hugely valued because “we went through the whole season line by line, making little changes. When we were at the set, you only had to act and to enjoy. There was a lot of humour on set and in the show.”

While Hilkka is coming to terms with her husband’s health issues, Andrés is also struggling with a loss of his own. This means that despite their differences in age and culture, they are able to comfort each other, leading to friendship and a love affair.

“It’s a more mature relationship,” says Tellem. “Usually what we see in TV series is infatuation, where people push each other to the wall and take their clothes off but in real life, it’s much more complicated. Especially when you have many things happening in your life.”

Production was handled by Finland’s Matila Röhr Productions (MRP), with CEO and producer Marco Röhr admitting he was surprised how well the combined Finnish and Spanish crew worked together.

“We were using the Finnish way of working and we had really good crews in Spain and people adapted,” he says. “But of course, it’s all to do with the production management and the director. If they can run the show, I don’t see much of a difference working in Fuengirola or in Utsjoki, which is the most northern part of Finland. The whole show was so well prepared that actually, for us, it was quite easy.”

Working for YLE, with Laine providing the voice of the series and Pyykkö taking charge on set, meant there were also clear leaders at every step.

“It’s not a challenge working in two different countries because you’re working for a channel,” Tellem explains. “You have to accept they take the calls. It’s very clear you are working for somebody and you need to make the show the way they like it. There’s always an open discussion. You can always say what you want, you can always have an argument, you can always have a discussion. Then, at the last moment, they take the decision but you know your voice is heard.”

Suvi Mansnerus, a producer for YLE, says: “There were three partners [YLE, Mediapro Studio and MRP] and we had trust and commitment between us. Every time we were talking about the series we were on the same side and we had the same goal. So it was very clear for all of us what we are doing. Maybe there’s something about Finnish humour. Maybe some of us know about ‘Finnish weird’ and mostly we talk about it in comedies, but I think there’s some Finnish weird in The Paradise, and that comes from the comedy that Matti and Marja have put in the show.”

With YLE airing the series in Finland, Orange TV will carry it in Spain under the title Kosta. It’s a premise that could see the show return for several seasons – season two is in development though not formally confirmed – but one that also has the potential for worldwide remakes, set among ex-pats who create a slice of home in a new country.

“I definitely think they are many, many more stories that can be told,” Tellem concludes. “The Paradise is also a format. There are many communities like this around the world and we would love to tell their stories.”