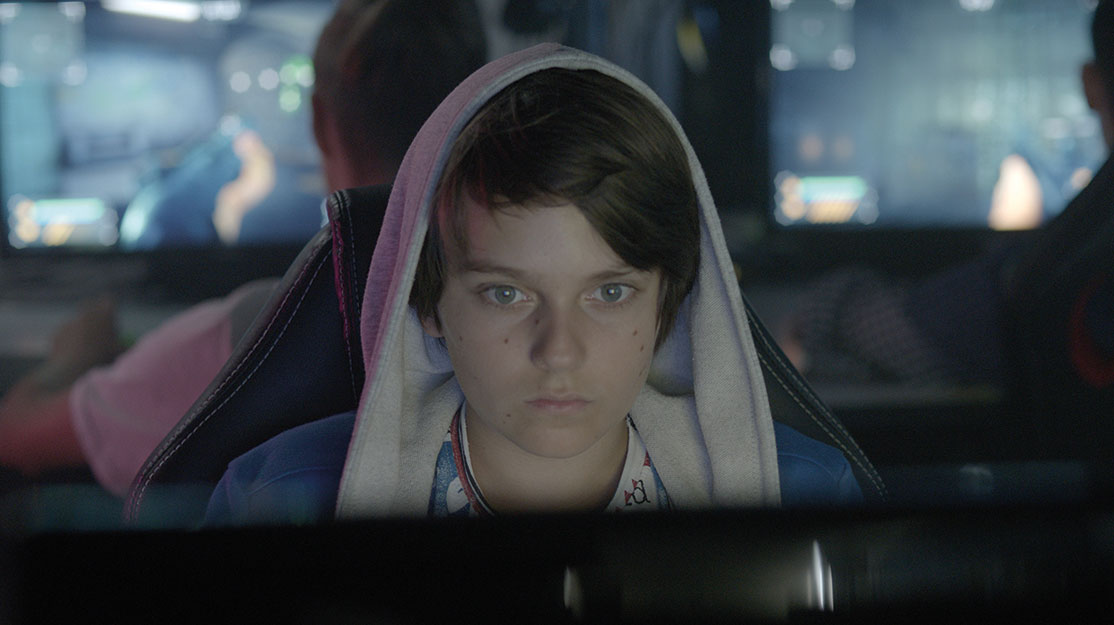 The cast and crew behind HBO Europe’s first international coproduction, Hackerville, explain why the drama is as much about relationships and culture as computers.

Outside, it’s a bright, early summer’s afternoon in the Romanian town of Timisoara, the setting for HBO Europe’s first international coproduction. Behind the tinted windows of the gaming café location of today’s shoot, however, it’s an altogether darker, stuffier atmosphere as computer fans whir and teenagers fidget impatiently.

Hackerville is the latest venture into Romanian drama for HBO Europe after the likes of gangster series Umbre. While it might not be tackling an entirely new subject matter – ostensibly police searching for computer hackers – the rich framework on which the story is laid down allows the plot to foray into the cultures and histories of two different countries.

On the surface, that story follows two police investigators who are tasked with tracking down the perpetrators of a hacking attack on a German bank. Delve a little deeper, however, and this seems to be as much an exploration of the differing cultures of Romania and Germany as it is about the havoc that can be wreaked by talented hackers.

Reflecting this wider premise, HBO Europe has German cablenet TNT Serie on board to coproduce – and the cross-country relationships don’t end there. The story itself comes from Deutschland 83’s Joerg Winger and Ralph Martin for UFA Fiction, while Tudor Reu and Cristian Mungiu produce through Romania’s Mobra Films.

The series will air on HBO Europe across Central Europe, Scandinavia and Spain, and on TNT Serie in Germany, Austria and Switzerland and launches this Sunday, November 4. Turner International is handling sales outside the HBO Europe, TNT Serie and US territories.

Anna Schumacher, who was born in Bucharest before moving to Germany after the Romanian revolution in 1989, leads the cast as Lisa, alongside Romania’s Andi Vasluianu, who plays Adam. Voicu Dumitras (pictured above) is Cipi, the young boy seemingly at the centre of the story.

The roots of the show lie in an article from tech magazine Wired about the global exploits of a group of hackers. “Ralf approached me with this story he had read about the real ‘Hackerville’ in Romania,” Winger explains. “He told me he had been thinking about new ideas and I said to go check it out, so he spent five days there and came back with a whole lot of stories.

“We thought it was so fascinating. All this hacking was coming from a town in Romania – not even the capital, but a rather small city, yet they could be so effective in their actions globally. This type of story is right up my alley. I’m really interested in international collaboration and exploring new territories and cultures, so we started to develop it.”

It helped that HBO had just aired a documentary exploring the mass migration of Romanians into Germany following the 1989 revolution. And when Antony Root, HBO Europe’s exec VP of original programming, suggested that rather than having an FBI chief flying to Romania, it should be a German, a rounded vision for the show came together.

Winger admits he did not have great knowledge of Romania, so local writers were drafted in to help pen the script. “We then had a lot of discussions about Romania, Germany, Romanians in Germany, Europe. I always think these discussions that can be controversial are great food for the scripts.”

Unlike dramas driven by a single showrunner or creative lead, numerous voices had their say on the Hackerville scripts and, indeed, the production as a whole. They delivered what HBO Europe VP of original programming and production Johnathan Young describes as a “layered cake” approach to production, allowing the show to make the most of local expertise in both Romania and Germany and adding to its authenticity.

It’s a point neatly highlighted by Anca Miruna Lazarescu, from Germany but born in Romania, who directs alongside Romania’s Igor Cobileanski (Shadows). “We had to decide about Lisa’s watch, for example,” she says. “We were on the same page with the big decisions – the cast, locations – but this fucking watch kept coming up week after week.

“Lisa was supposed to wear a Casio. It was a bit of a vintage, old-fashioned digital thing. But when Igor saw it, he took one look and said, ‘This is not hip, this is not hip at all, you can get it for like 10 leu [US$2.50] at the piazza.’ I thought it was totally hip. These things are great in Berlin. It’s über hip.

“You’ll see what happens in the end, but things like this tell you so much about what is hip there and what’s cool here, and what could be boring here and what could be boring there. Things I think could be so Romanian, he’ll say, ‘No, it’s not Romanian at all, it’s a cliché about Romania.’ And I have to realise that I left 20 years ago so perhaps it’s not real and it is clichéd.”

Having been born in Romania herself, Schumacher also had some knowledge of the country, and took her experiences into the show. “Lisa speaks two languages – Romanian and German – and funnily enough it is kind of my life story too, because I was born in Romania but have lived in Germany for 28 years now,” explains the actor, who also has scenes with her actor father, Ovidiu Schumacher, in Hackerville.

“It’s amazing to balance German and Romanian cultures and languages, and a nice part of it all is that what my character is experiencing, I too am experiencing myself,” Schumacher adds.

The premise, the actor explains, is that a German bank’s IT systems have been attacked by someone based in Romania, with her character then sent to Timisoara to sort out the problem. The town of just over 300,000 people, tucked to the south of Hungary and to the East of Serbia, offers both stunning Gothic architecture and more brutal Communist-era constructions and is, as Young puts it, “very colourful with layers of history.”

“We’ve been shooting since the beginning of March, going from winter to summer in about two weeks,” he jokes, with scenes being filmed “more or less” chronologically.

“Lisa is the right person to do the job, as she speaks both languages and cyber crime is her specialism,” Schumacher says of her character. “She comes here and finds herself having more challenges than just doing her job, particularly having challenges with the culture that she’d left behind that was still inside of her.

“She’s trying to find new ways to adapt to the person she really is,” she continues, “and maybe who she forgot she was when she was in Germany. She finds her roots and where she really comes from, she finds out things she didn’t know about herself. That changes her.”

For Young, Hackerville is “both about homecoming and a culture clash story.” It also allows Schumacher to tap into her real-life experiences – Vasluianu, who plays her male counterpart in Romania, says that when they started shooting in Romania, certain smells would evoke childhood memories for the female lead.

For the young Dumitras, who plays Cipi, these are the scents of home. Although shooting has taken in locations in Bucharest and Frankfurt, it is Timisoara – Dumitras’s home town – that has been the main hub for the production. He describes his character as a boy “with a good heart but like the genius who does stuff and doesn’t realise it has consequences.”

“He spends most of his time playing and hacking, but not many people know about the hacking. He kind of loses track of the world. He’s just playing with his games and doesn’t realise his actions may lead to unexpected effects.”

The show also explores the non-existent boundaries of being online, both in terms of hacking and playing games against others regardless of their actual location. A first-person computer game has already been created – set in Timisoara – that features in the show, and the story delves deeper into this theme of freedom.

“The juxtaposition of what you see on the ground and where you can be in the online space is really interesting,” says Young. “You can be in a basement on a computer, but in your head you could be anywhere in the world. That is a big part of the hacking and gaming story.”

But the show, set for a November launch on both HBO Europe and TNT Serie, also includes elements of comedy and humour that differentiate it from other hacking-focused programmes.

“We started with a fear of being another hacking show; fear because they tend to centre on doomsday scenarios involving bringing down a satellite or blowing up a nuclear power station. I won’t tell you where Hackerville goes, but it doesn’t go there,” Young says.

“We wanted to make it much more of a human story, and we’ve achieved that. Part of why we’ve been able to do so is because the gaming strand parallels the hacking strand.” Both activities involve similar mindsets, he adds, offering an element of “play fun alongside the more serious undercurrent of the real world.”

The show has been largely edited alongside filming, with musical elements being added concurrently. This has meant everyone is involved in the process together at the same time, according to Young. “It’s part of this layered cake process and that is making it a very rich, collaborative experience.

“We’re very much brought up on this notion of a showrunner and writers division, and actually this is something we believe in and that we are developing in almost every other instance. But this show has evolved in a very different way. There was the idea from Ralf and Joerg, and then we had Romanian writer input.

“It wasn’t immediately apparent where the overlaps between cultures came, and it took a little bit of time to find common ground, which is why I think of it as a layer cake. We had Joerg and Ralf come in, then the Romanians and we kept building it up like that. But then when you slice through it, you have a coherent show.”

What makes it coherent, Young adds, is Schumacher, who is “an absolutely authentic German-Romanian lead who is fascinating to watch. She flips from speaking German to Romanian, and I find that magic. It’s unfakeable.”

Such authenticity underlines HBO Europe’s wider remit, according to Root, who says the company “defines itself by its localism.” Certainly, emerging from that dingy internet café in Timisoara and back onto the breezy streets after the shoot, the world of internet gaming and hacking seems a million miles away. And perhaps that’s the point.