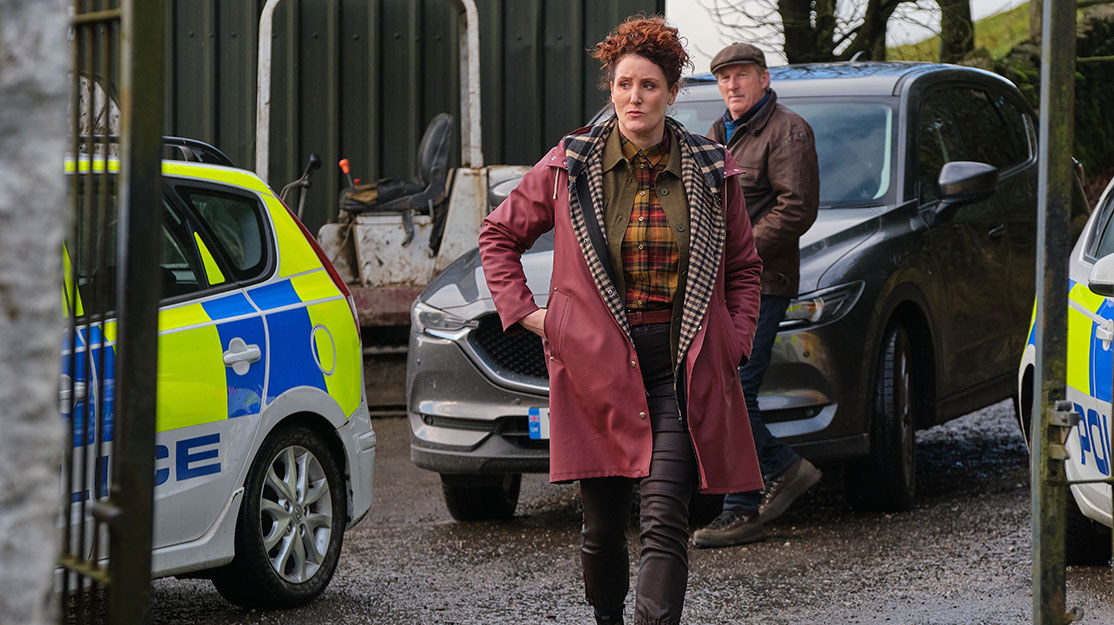 From supporting roles in The Fall and Our House, Bronagh Waugh takes the lead alongside Adrian Dunbar in ITV drama Ridley. She tells DQ about accents, knitwear and the demands of filming with a new baby.

When BBC dramas The Fall and Line of Duty were both in production in Belfast, there would have been a strong chance of actors Bronagh Waugh and Adrian Dunbar crossing paths every once in a while.

Yet it wasn’t until they both signed on to star in ITV detective drama Ridley that the pair finally met. Waugh, who played serial killer Paul Spector’s wife Sally Ann in The Fall, says the chance to work with Dunbar – otherwise known as Superintendent Ted Hastings in Line of Duty – was one of the main reasons she took the role.

In fact, Waugh had a choice between two different jobs and was struggling over which one to select. In the end, teaming up with Dunbar, the appeal of her character Carol and the quality of the scripts from writer Paul Matthew Thompson led her to pick Ridley.

“Paul and I were on the same page right from the beginning about Carol. I loved that he gave me free rein with that and that her sexuality didn’t define her,” the actor says of her character, who is in a same-sex relationship. “Sometimes people will try to make that the story, and it just shouldn’t be that. She is a family woman, incredibly successful and ambitious, but constantly having to prove herself in a very masculine world. He gave me free rein to play with it a little bit, which I really respect.”

In Ridley, Dunbar plays the title character, Alex Ridley, a retired detective who was once a mentor to Waugh’s Carol Farman and is now grieving the deaths of his wife and daughter in a tragic house fire. When Carol asks for his help on a complex murder investigation, Ridley returns as a police consultant, with audiences following the pair as they team up across four two-hour films.

Waugh likens her relationship with Dunbar to that between Carol and Ridley. “He’s such an amazing actor, but he’s also so kind and funny. He really looked after me,” she says. “We’ve mimicked our relationship with Carol and Ridley because he’s been a mentor to me and I’ve learnt a lot from him. It’s been a real riot and, from the chemistry test onwards, we both just knew we had a bit of a thing.”

Carol, Waugh says, is “a bit cheeky and does things slightly differently. She’s a bit of a maverick, the same as him – they’re kindred spirits. That’s why they they’ve kind of come together. They’re not like the other coppers at this place. That’s what bonds them together. But she was missing a father figure, and she wouldn’t normally accept that from certain people. But with Ridley, she does because he’s his own person and she likes that.”

Through the series, the third instalment of which airs this Sunday, viewers also learn about Carol’s home life, which was one of the aspects of the show Waugh really liked. She compares this aspect of Ridley to another ITV crime drama, Unforgotten, in which the audience spends time at home with detectives Cassie Stuart and Sunny Khan. Waugh was a guest star in its third season.

“I loved their relationship and how they told that story [in Unforgotten], and what I loved about Ridley was that there were some echoes of that, that we get to see their home life a lot,” Waugh explains. “You see a lot about Ridley’s and a lot about Carol’s. You’ll see my wife lots, my son, you’ll get to know about our life.

“There are so many crime dramas around at the moment and we’re mad about them as Brits. We love it. But what can you do to set yourself apart and what can you do to make it different? There are several things in Ridley: there’s a huge music theme and jazz, and I’ve never seen that before, and it actually looks different. It’s got a different feel to it. The other thing is you get to look into their home lives, and that’s a way of us being able to connect with the audience and get them to care about you, because ultimately if they don’t care about you, they’re not going to stay with you.”

Waugh’s part in Ridley is her first leading role in a TV series, after appearances in The Fall, Unforgotten, Des, Viewpoint and Our House. But while it comes with a step-up in screen time, the actor admits there’s also an increase in pressure on her shoulders to lead the show, both on and off screen.

“That’s a tricky dynamic because Ridley used to be the boss, so you’re finding your feet in terms of both the job and also as the character, where I’m having to command quite a bit of presence and authority in a very male environment. I definitely felt a bit of pressure.”

She also had to come to terms with learning often perplexing “police speak,” but was aided by Dunbar, who is no stranger to unwieldy acronyms after six seasons in Line of Duty.

“Adrian kept reassuring me and saying, ‘Listen, once you’ve done a couple of episodes, it will become second nature to you.’ But it’s just getting your mind around that to begin with and making it look like you deal with this all the time. That was definitely a challenge, especially with a newborn baby who didn’t sleep,” says Waugh, who moved to Manchester, north-west England, for the shoot with her five-month-old son in tow.

Waugh praises production company West Road Pictures for providing a supportive workplace environment for her while making the series, which was actually her fifth acting job since giving birth.

“I started back when he was three weeks old and I did Our House, another ITV drama with Martin Compston and Tuppence Middleton,” she recalls. “I then did two other projects and a film in between, and every single place, including Ridley, was just super supportive and amazing. It was a challenge because my son didn’t sleep, so the main difficulty was I didn’t get any sleep [before filming] the first episode. Now he sleeps and that makes my job easier.”

Ridley was filmed across the North of England, with scenes shot in the Yorkshire Dales and the North Yorkshire Moors lending the series a vast, rural atmosphere that is juxtaposed with those set inside the police station or Ridley’s jazz bar. Towns and cities including Southport, Bury, Bolton, Hebden Bridge, Harrogate and Halifax also feature in the series, which is distributed by All3Media International.

“It was freezing. It was very, very cold,” Waugh says. “But I’m Irish and I’m used to that. And Adrian is not soft. He’s Irish as well. He’s a farmer. He knows what it’s like. It was very cold and challenging, but that’s what makes it look this way. It’s got a real Northern noir feel to it.

“When we did The Fall, we were going for Celtic noir, and it works with the rain and the cold and the isolation, especially for Ridley. But the landscapes we worked in were just stunning. It’s a very different genre and you don’t really get to see that landscape and topography in many shows. It’s a real country thing and it shows some grittiness.

“The farm in episode one, it took us like an hour to get to that location [from Manchester] and the roads would get closed off. We had to dig out of the roads to get the buses down there. They’re really remote locations, but they look great.”

To match the locations, Northern Ireland-born Waugh adopted a Mancunian accent for the duration of the shoot. She would mimic her friends and one of the producers from that part of the country, and also visited pubs and spoke to locals to immerse herself in the area’s customs, colloquialisms and mannerisms.

“That, for me, is the best way to learn,” she says. “There was this wee old man’s pub down by our apartment and I just went and sat there and started chatting to some guys and was trying to work out where I wanted [Carol] to be from. In Greater Manchester, there’s a huge number of different accents you could do. I like to be very detailed and specific.

“Then I made a decision – I do this on every job – to speak that way from beginning to end, especially because Adrian is from Northern Ireland. That made it the hardest job in terms of accent, because I had someone from where I’m from, so that’s even more reason to stay in.”

As well as Carol’s accent, Waugh also had a say on her character’s costumes. The actor worked with costume designer Claire Lynch to decide what Carol would wear, eventually opting against a suit and going with a range of knitwear not unlike that sported by Danish detective Sarah Lund in Forbrydelsen (The Killing).

“I was very pernickety about it because in cop shows, coats can become iconic. Look at Lennie [James] in Save Me – that yellow puffer coat is the first thing you think of when you think of Save Me,” Waugh notes. “I did see an incredible donkey coat that I wanted but they were not having it and it wasn’t very practical. We settled on a really practical, rubber waterproof coat. They were also trying to get me to wear sensible shoes but I was like, ‘Absolutely not, it’s boots. You need to have a pair of hiking boots and a pair of wellies because we’re all on farms.’

“Then there was the added thing of, ‘I’ve literally just had a baby, so I’m two sizes bigger than I would normally be and I feel uncomfortable, so how can you make me feel more comfortable?’ There was no way I was dieting in minus-six conditions. I was eating that food and that was it.”

The actor is hopeful Ridley will return after its initial run, describing it as a show that suits viewers with busy lives who may be looking to dip in and out of a series and enjoy the episodes on their own or as a collection.

“If people really like our characters, hopefully they’ll want to watch these little novellas you can dip into and you can get the whole crime solved in that one story,” she says. “So often, people ask you to invest so much of your time – and hopefully everyone will watch them all, but you don’t necessarily have to watch them in sequence. I definitely think it’s got legs as well, and I hope everyone else thinks so too. Adrian’s fabulous in it, and Ridley is brilliant. You just love some of the moments he brings to the table.”

As for Carol, Waugh hopes viewers can engage with a character she doesn’t think is seen on television very often.

“You don’t often see female characters with much jazz and much pizzazz in terms of cops and detectives, so I’ve tried to make her a little bit gobby, and she’s tired. I made the tiredness work for me, I have to say,” she jokes. “I brought a lot of masculine energy into the character, but also some of the lightness. Anyone who has an experience of having a small baby, your tolerance level goes down. So if I wasn’t having fun, I would have been out of there, whereas it was a really nice environment and a cracking set of people. There were no arseholes.”