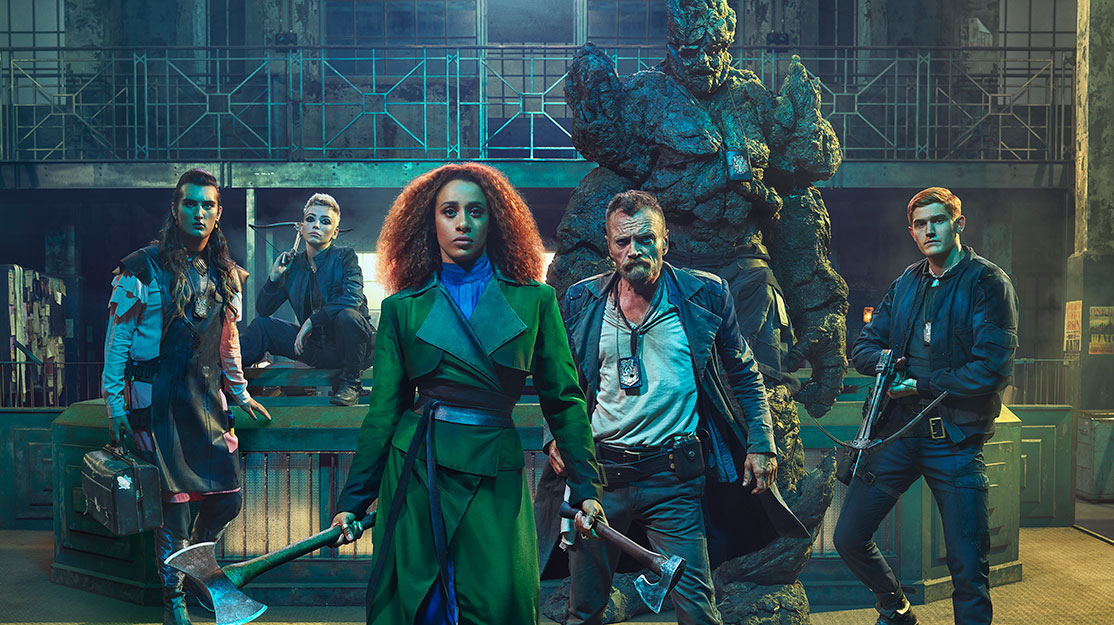 Novels by the late Sir Terry Pratchett are no strangers to television adaptations. Hogfather, The Colour of Magic and Going Postal have been brought to the small screen by Sky, while Truckers, Soul Music and Wyrd Sisters have all been transformed into animated series.

Last year, Good Omens, which Pratchett co-wrote with Neil Gaiman, was recreated for TV by Amazon Studios and BBC Studios, with Michael Sheen and David Tennant starring. Earlier this year, meanwhile, Pratchett’s Narrativia struck a partnership with Motive Pictures and Endeavour Content to bring the author’s Discworld universe to life in a series of “definitive screen adaptations.”

But the latest series based on the author’s work is set to be something completely different – and has already caused controversy, with some fans uneasy about the cyberpunk aesthetic on show in the recently released  trailer. Also inspired by the Discworld novels, The Watch is described as a “punk rock thriller” set among the characters of the City Watch, a bunch of misfit cops fighting to save the ramshackle city of Ankh-Morpork.

Produced by BBC Studios for BBC America, the show’s cast is led by Richard Dormer (Game of Thrones) as Sam Vines, the captain of the City Watch. Lara Rossi (I May Destroy You) plays the last scion of nobility, Lady Sybil Ramkin; Adam Hugill (1917) is the naïve but heroic Carrot; Marama Corlett (Blood Drive) plays the mysterious Angua; and Jo Eaton-Kent (Don’t Forget the Driver) is ingenious forensics expert Cheery.

They are joined by Paul Kaye (Game of Thrones) as Inigo Skimmer and Ralph Ineson (Chernobyl), who lends his voice to Sergeant Detritus, a huge troll made of stone and a member of the City Watch. Wendell Pierce (The Wire) voices Death, a dry, sardonic Grim Reaper, and Matt Berry (Year of the Rabbit) voices magical sword Wayne.

Behind the scenes, lead writer Simon Allen (The Musketeers) executive produces with Richard Stokes (Broadchurch), Hilary Salmon (Luther) and Ben Donald (The Mallorca Files) for BBC Studios, alongside Rob Wilkins (Good Omens) for Pratchett’s production company Narrativia. Distributed by BBC Studios, the series is directed by Craig Viveiros (The War of the Worlds).

Here, Allen and Stokes reveal more about the development process behind the series and how they brought the world of Ankh-Morpork to life while shooting in South Africa.

The series inspired by Terry Pratchett’s Discworld novels. In what ways is it similar to and different from the books?
Stokes: It is very different. It’s inspired by the characters that are in the books, and Simon’s done a brilliant job of updating and changing the world so it fits an eight-hour returnable series. ‘Adaptation’ isn’t quite the right word.
Allen: A lot of what’s really amazing about the books is dependent on the fact that they are books. They work because they use the architecture of literature in a very specific way that I think a lot of fans would say can’t be replicated.
What we tried to do is to take that engineering and that thinking, and his approach and mentality, and apply it to the medium of television – to the genres of fantasy, cop shows and workplace dramas – to create an experience that’s very universal.
You don’t have to be a Pratchett fan to enjoy the show. But if you are a Pratchett fan, if you give it a chance, you will see 1,000 things in there that are entirely consistent with the spirit and tone of the books that you love so much.

What made you decide to take the characters and put them in a new story as opposed to a straight adaptation?
Allen: In terms of dramatising Guards! Guards! [the first appearance of the City Watch], which I’ve loved since I was 15 years old, I don’t think there would be eight episodes worth of drama and story in it. It would make an amazing film or two hour-long episodes. But what I love about Terry Pratchett is he’s a spectrum. The Terry Pratchett of 1989, when the first Watch book was published, is a very different writer from the Terry Pratchett of 2002 when Night Watch was written, which was one of his great works.
I was very concerned that if we did something that was too close to the original, you wouldn’t get all the amazing things he went on to become. So what we’ve done is borrow liberally from across the spectrum of Terry Pratchett and from all of the books he did to create a whole new experience that is a love letter to what I took from those books and how I responded to them.

Simon, what has been the writing process behind the series?
Allen: I like to work collaboratively. I had a really amazing team of people around me on this, including Richard and Rob [Wilkins]. We had a lot of new voices in our writers room and a lot of people who don’t often get an opportunity. In particular, we worked with a writer called Amrou Al-Kadhi, an extraordinary non-binary, queer writer who brought a new perspective to the whole piece. Amrou really responded to the queer themes in Terry Pratchett’s work and allowed us to extrapolate those and build them into the fabric of the show.
Our show has a real queer sensibility about it and a lot of the queer audience are really going to enjoy it. Amrou uses the phrase ‘queer content.’ There’s a real queer journey for one of the characters, Cheery, and we’re putting something on screen and dramatising something that isn’t done very often and certainly hasn’t been done in this kind of show.

The Watch is described as ‘genre-busting.’ Tell us more.
Allen: There are times when it’s a police procedural, a workplace comedy, a romantic comedy, a fantasy thriller and a musical. It really does use all of those genres and blends them together so you never quite know what it’s going to do to you.
It’s a show that turns at right angles in really unexpected ways, turns mean on you, moves you and surprises you. I really think we’re doing something new, and I don’t think we’d be able to do it if we weren’t working with this incredible, rich material, because the source material itself is very subversive, very disruptive and innovative.
Terry Pratchett himself was incredibly irreverent in all kinds of ways. He had no respect for form, for genre, for the literary medium, and we’re being similarly irreverent towards television. When I pitched the show to [then president and general manager] Sarah Barnett at BBC America, the thing I constantly alluded to was the way it felt like watching sitcom The Young Ones as a kid in the 80s, which felt really dangerous and volatile. I don’t think people know quite how radical it is.

As producers, has it been difficult to balance those different genres?
Stokes: It’s always quite difficult to take different elements. Everyone knows the police procedural and the romantic comedy, and tonally trying to get that right is a fine line to tread. Like the original books, there are bits that are very funny and there are bits that are very moving and very empathetic. And there are times when hopefully the audience will laugh and hopefully will have a tear in their eye. It’s trying to be distinctive and different yet using elements that audiences are familiar with.

Have you faced any particular challenges during the making of the series?
Allen: A lot of what we’re trying to do is very physical, very handmade. It’s bizarrely not a VFX-heavy show in lots of ways. There is VFX but we’re quite CGI-light. We tried to do a lot of stuff in camera.
The watchword we used, which I put in the original series bible when I pitched it, was ‘fantasy with fingerprints.’ I wanted to be able to see the fingerprints of the people who made it because I grew up with movies like Time Bandits and Labyrinth. We use an awful lot of prosthetics. The costumes carry a lot of the heavy lifting. It’s a very physical, tangible, lived-in universe rather than one that’s inauthentic and CG’d to hell.
That has been a particular challenge, because you’re making things all the time. We had lots of bizarre conversations, like being on the set at three in the morning having a debate about whether  we could put an eyepatch on a pigeon to make it look like David Bowie. And we have managed to make a pigeon that looks a bit like David Bowie, but it doesn’t have an eye patch.

What was your experience filming in South Africa?
Stokes: From a producer’s point of view, it’s been great. When we came to look at the original designs for how we wanted the show to look, we looked at various places – Prague, Budapest, a couple of other places in Europe – and they were very busy. It also felt like that was a world of Pratchett that had been done before with the Sky adaptations, and we wanted to do something slightly different. Cape Town offered that, and we had a producer who assembled one of the best crews I’ve ever worked with. It’s been extraordinary.
Allen: Pratchett fans have different versions of the city of Ankh-Morpork in their heads. Some people think it’s Victorian Georgian, some people think it’s like Seattle or medieval or Roman. What I always took from Terry Pratchett in the way he executed Ankh-Morpork was it was contrary. It had a mix of old and new architecture. We’ve been able to achieve that in South Africa. It’s a very contrary environment; it has a slightly junk-yard aesthetic, with different styles clashing and different architectures blended to create something that feels familiar but, at the same time, utterly fantastic.

How does the series compare to other Terry Pratchett adaptations?
Simon: It’s very different from the Sky adaptations. I think it’s much more like Pratchett than the Sky adaptations because of its spirit and its tone. It’s incredibly funny and incredibly moving. If I were to position it in the marketplace, I would say it’s definitely between [fellow BBC America shows] Orphan Black and Killing Eve as a point of orientation. It’s incredibly subversive and left-field but has broad appeal. It has those universal themes you look for in a show you want people to relate to.

What can viewers, and Pratchett fans in particular, expect from the series when it launches on BBC America on January 3, 2021?
Allen: You can expect an incredible ride. You can expect to see versions of the characters you know and love. We have loads and loads of very irreverent, outrageous things. The show is incredibly provocative. Every episode features a sequence in it that’s unlike anything you’ve seen before.
There’s a ballroom dance in episode four when they go into a facility that has a curse on it – if you try to fight each other, it makes you dance. So the villains and the heroes have to dance together, which is a very Terry Pratchett idea.
In episode six, a villain is vanquished through a magical queer drag-queen lip-sync battle. We do 101 things that people will expect to see and 101 things they couldn’t even imagine are coming. It’s going to be quite a ride.