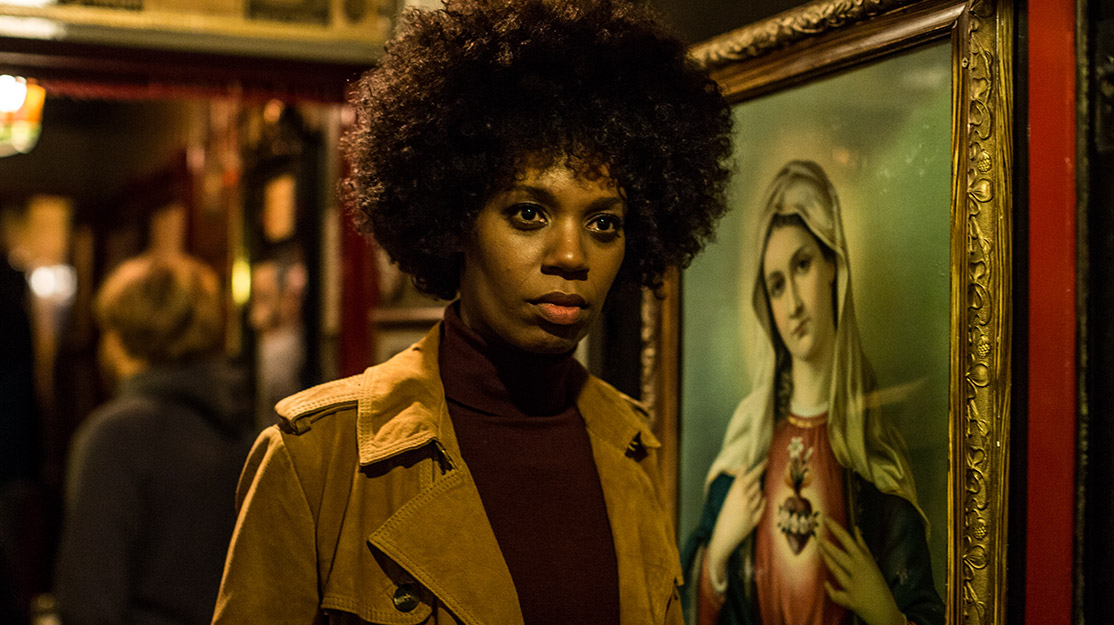 Flemish series Grenslanders (Floodland) sets a crime mystery against a unique backdrop as investigators from Belgium and the Netherlands join forces in this cross-border drama.

The mudflats of the River Scheldt, which flows along the border between Belgium and the Netherlands, provide a unique and eye-catching landscape that serves as the backdrop for Flemish thriller Grenslanders (Floodland).

It’s here that a small boat emerges from the mist, bobbing on the water, its cabin riddled with bullet holes and its walls dripping with blood. The next morning, a young girl is discovered wandering among the mud and grass, clearly injured and exhausted by an unknown ordeal.

When Dutch police inspector Tara Dessel (played by Jasmine Sendar) and Belgian psychologist Bert Dewulf (Koen De Bouw) are called in to investigate the mysterious boat and identify the girl, they confront the border communities where the people who live there may be hiding secrets of their own.

Produced by Eyeworks and Column Film for Belgium’s VRT and Avrotros in the Netherlands, the idea for the series came from co-creators Rik D’Hiet and Erik de Bruyn, who also wrote and directed the drama respectively.

De Bruyn had seen a show written by D’Hiet called Het Goddelijke Monster, a saga about a scandal-ridden family, and suggested they partner for a new project. The director was particularly keen to make a show that would appeal to Flemish audiences in both countries.

“We speak the same language but we live in different countries so we are a bit estranged from each other,” D’Hiet says, speaking after a screening of Floodland at the Serié Series television festival in France. “So we started imagining what kind of series that could be. Very soon we wanted to create a series set in this special region that is called the ‘Floodland.’ We started thinking what would happen in this kind of region where you have these huge mammoth tankers going to the cities inland and at the same time you have this very regional culture that was very peculiar.

“Then I came up with two images – the first was the image of a girl wandering around in the flat lands on the Belgian border, and this other image was of a small yacht floating around on the Scheldt River. Fom there, we started to imagine and create the story.”

Mylène Verdurmen, head of drama at Avrotros, was immediately enthusiastic about the concept and the idea of creating a cross-border Flemish series. “They pitched it to me through these two images and the characters,” she recalls. “They didn’t have a huge bible yet, just a small story, but the story was told through the characters already and it was this magical thing. You knew it was going to be a great idea.”

The creators took special care to find the right tone for the series, looking specifically at how the characters would look and react to each other. “They all have their specific language and we also wanted a slight irony to the series,” D’Hiet says. “It’s not too serious – it has to be suspenseful, you want drama because it’s a mystery, but it doesn’t have to be too dark. It’s not Scandinavian noir.

“We wanted to lure people into the story in a rather classical way. We have these two main characters, Tara and Bert, but when the story develops we focus more on the other characters as well. It’s really about a cast of strong characters who have their own peculiarities but also that can move you in a special way.”

Sendar auditioned for the role of Tara on the basis of a single scene. Then, when she was called back a couple of months later, she met de Bruyn and sought to find out more about the character.

“I asked him, ‘What’s her issue?’ because she has issues,” the actor says. “We started talking and it was interesting, so from then on I really got excited. I wanted the part because it sounded really cool. After three auditions, I heard I got the part, but then we had to find my partner and I really connected with Koen, who plays Bert. As an actor you imagine what it will look like and how everything would be. Then when you go to the edit, it’s even more than you can imagine so I’m happy I got to be a part of this.”

For Tara, particular attention was given to how the character would look, from her vintage car and leather jacket to her hair. “I was wearing a wig and it needs to be on tight if we’re going to have boat shots. I don’t want to be losing the wig,” she jokes. “So we had discussions about that and how we were going to do it. Also for me, it was really important that she wears natural hair, because you don’t see that very often.”

Elly Vervloet, head of international drama coproductions at VRT, says Floodland is typical of the character-driven series sought after by the public broadcaster, with both Tara and Bert dealing with personal issues beyond the case at hand. That the story also deals with the subject of human trafficking also means the drama holds contemporary relevance.

“We all know what the problems are and that criminal organisations arise as soon as there is a humane disaster taking place. That is important for us [to talk about],” she says.

Verdurmen describes working on Floodland as “one of the loves of my life,” noting how she teamed with D’Hiet and de Bruyn in the beginning before producers Chantal van der Horst of Column Film and Eyeworks’ Peter Bouckaert came on board. Then VRT joined the coproduction, with distributor Federation Entertainment picking up worldwide rights to the show.

Though Flemish drama budgets do not match those enjoyed by producers in France, Germany or Scandinavia, the cost of the eight-part series grew from an estimated €4m (US$4.4m) to more than €5m, owing to the challenges of shooting on location, travel and battling unhelpful weather conditions. It aired on Avrotros in August and VRT in September.

“But we still had to chew every euro,” he says. “We were confronted with crazy things. When we were approaching May, there was a very rare bird who decided to breed in the area where we were shooting and all of a sudden we could not shoot there anymore. This was a location we had been specifically looking for because of the tides, so we had to scout other locations. We decided to shoot later on when the birds were gone. It was crazy stuff. It comes with the territory. And the weather was extreme.”

Sendar describes the six-month shoot as “challenging,” with production beginning amid freezing temperatures in January. “The entire crew had masks and gloves on. I was in this very cool vintage jacket,” she notes. “But during the summer, when it was 30 degrees, everyone was in shorts and I was still in the jacket and turtle neck jumper.”

With high-end drama budgets continue to rise, coproductions are becoming increasingly necessarily to balance the books and deliver cinematic visuals that can rival many big screen movies. As Bouckaert notes, however, building these relationships purely on financial terms is not a surefire recipe for success.

“Financing has to come in a natural way and this was the case for us from the very beginning,” he says. “We started together at a very early stage when there were no scripts yet. We had to think about what series this would be. There was a single vision and that’s so important. After three-and-a-half years of preparation, we still ran into things we hadn’t expected during shooting.”

While The Bridge and its various remakes have mastered the art of cross-border storytelling, Floodland stands out for its compelling lead characters and the unique environment in which its mystery plays out, holding more secrets that are waiting to be uncovered.